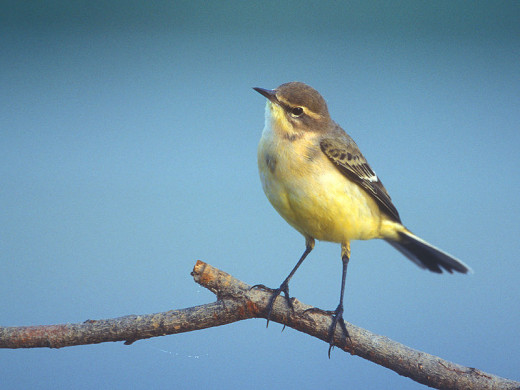 The Yellow Wagtail Motacilla flava belong to the order of birds known as the Passeriformes {perching birds} and the family Motacillidae within that order.

The genus name Motacilla derives from the Greek muttex a bird described by Hesychius {and means moving tail}. The specific name flava from Latin flavus =yellow. In the UK it is placed on the Red list of conservation concern {declines of 50% or over in the last forty years} with an estimated 15,000 territories in summer.{ Courtesy of the BTO } See conservation issues below. There is a race that occurs primarily in the UK known as Motacilla flavissima.

They are birds of damp meadows,marsh,riverbanks and arable land. The Gaelic name for the bird is Breacan-buidhe The Croatian name is Zuta Pliska,the Irish ,Glasg Bhu and the Welsh name is Siglen felen.

Willy wagtail is an unrelated species from Australia. 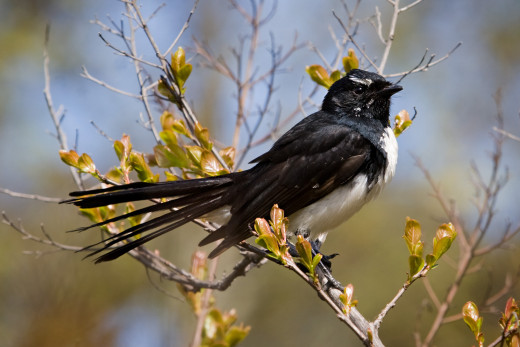 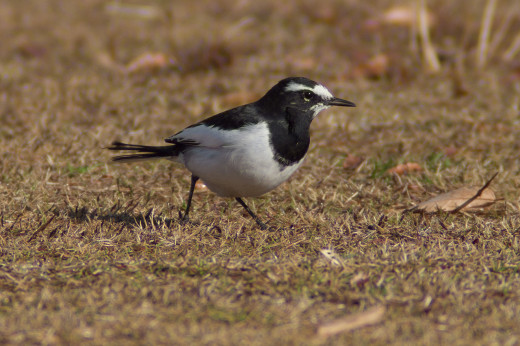 These birds get their common name from the way they 'wag' their tails which are constantly in motion flicking up and down, it corresponds with every movement of their body. These birds were once put into groups. The 'Pied' and 'Yellow' wagtails or 'Water' and 'Field' wagtails. They have in more recent times been divided by some into two groups -the yellow bellied and the White bellied kinds,however, this method is unreliable as the plumage can change at certain seasons causing confusion using this method of grouping.

There are several genera and species distributed around the world. For example the Forest wagtail belongs to the Monotypic genus of Dendronanthus which is closely related to the Motacilla and sometimes included with them.

The Willy Wagtail Rhipidura leucophrys { Pictured above } of Australia is an unrelated bird but is similar in colour and shape to the Japanese Wagtail Motacilla grandis { Pictured above} it belongs to the Fantail Flycatchers.

Wagtails are slender,graceful birds that tend to feed on the ground of open country. Here we review the Yellow Wagtail Motacilla flava and another race M.flavissima,and as always we commence with a description of the species under review. 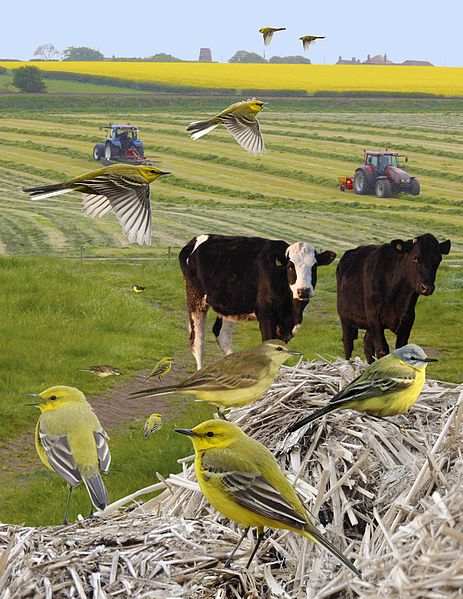 The male in breeding plumage has the upper parts chiefly a yellowish green colour, the forehead more yellow and the upper tail coverts slightly more olive. The wing coverts and flight feathers are smoky brown, tipped and edged with pale buff. The tail is blackish, the outer two fathers on each side white with black edging to the inner webs. There is a sulphur yellow streak over the eye and ear coverts. The latter and the lores a yellowish olive. The under parts are a bright canary yellow . The bill and feet black, the iris hazel.

The female is browner above and paler below and the eye stripe is yellowish white. After the autumn moult both sexes become duller and much less yellow. The young birds are slightly browner than the female on the upper parts. The throat is a pale yellowish buff, abdomen pale yellow. The sides of the neck and breast more or less streaked and spotted with brown.

They are often confused with the Grey Wagtail, or vice versa, which also has yellow in its plumage. This species has already been reviewed in this series. 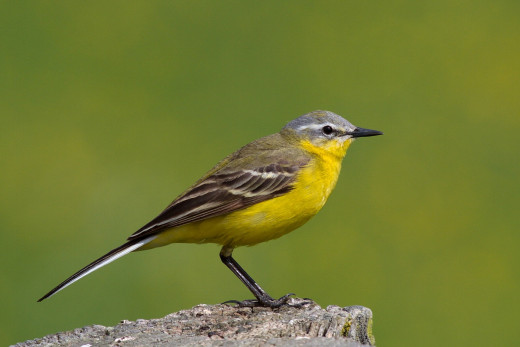 In the days before it became illegal to keep wild birds in captivity {with a few licensed exceptions} it was a common pastime. Bird-catchers made a good living from procuring the birds by any means {usually in nets}. They sold them to bird keepers, and to the markets as items of food. The following paragraphs relate to the Yellow Wagtails, being Kept in captivity during that period of our history.

Butler 'British Birds with their nest and eggs' relates--

" My first experience of this species was a short one. In the winter of 1889-90, a Bird catcher brought me a specimen which he had carried about in a cage with linnets**, and other birds all day, no water being supplied and only seed being available for food. The poor thing was so exhausted that it died the following morning."

" My second bird was given to me was given to me in 1889 by Mr.Staines of Penge, who had already had it in a room for some time .I turned it out into a cool aviary with my Grey Wagtail, where it spent the winter without mishap, though the temperature on one or two occasions registered twelve degrees of frost. In the spring it came into grand colour, and then began to persecute its Grey relative, so that eventually I had to place it in a large flight cage. This I suppose it resented, for in the autumn it died."

" In the wild state the Yellow Wagtail feeds on spiders, insects and their larvae, centipedes and small worms. In confinement it requires a few insects, cockroaches answering the purpose as well as anything. But as a staple diet, the same food as that given to all insectivorous birds answers admirably. It usually commences on the yolk of an egg and ant's cocoons, only eating the bread and potato as a last resort, when other ingredients fail"

Mr Septimus Perkins, in the 'Aviculutral Magazine', published some interesting notes on this species. " Some few years ago,while living in the Midlands I possessed a fair sized indoor aviary, in which I kept a good many migratory British birds. Here I kept the Yellow wagtail along with the smaller most delicate warblers ,and I never found that he did them the slightest injury, although he was sometimes a little tyrannical. But two male Wagtails, whether of the same or different species,will quarrel and fight"

" This bird is somewhat a large eater, and takes very kindly to hard boiled egg, though he likes Abraham's Preserved Egg ,even better, because that is all yolk. He should have as much egg as he will eat, and as many soaked ant's eggs as he will eat. Also three or four meal-worms a day and as many flies and small caterpillars as you can take the trouble to catch. The Yellow Wagtail is a tender bird, but I do not consider him nearly so delicate as the warblers, he eats more heartily of artificial food than they do and consequently does not require so many meal-worms."

Another eminent writer gives this advise as regarded aviary food. " In my opinion none of the Wagtails are delicate, but if the birds are overfed ,they are more liable to disease, than when fed moderately. It must always be borne in mind, that birds in a cage or aviary do not have to search for food, therefore their tendency is to eat more than is good for them" 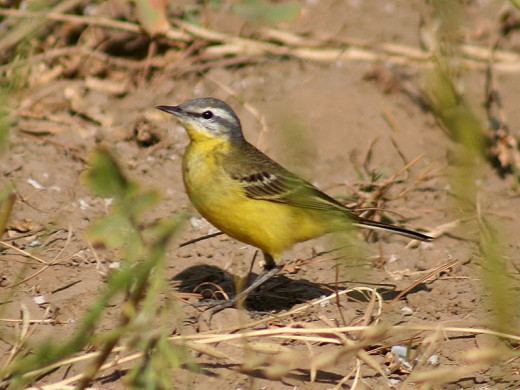 The site chosen for the nest is frequently a furrow or depression in the ground, in a pasture or cornfield, partly concealed by coarse grass ,herbage or a dislodged grassy clod ,sometimes in the side of a deep pit partly filled with water and overgrown by grass or nettles ,or in some sloping bank covered with weeds and wild flowers, or again among the long coarse grass at the foot of a wall. They are incredibly difficult to locate for they are always well concealed in which ever situation they have chosen to build.

The nest itself is constructed of coarse grasses and rootlets, lined with finer rootlets and fibres ,grass ,moss or rabbit down. It is said that sometimes feathers are used ,but this is the exception rather than the rule.

The eggs number five to six and are very similar to those produced by the Sedge Warbler **, accepting that they are larger. The paler varieties are greyish white more or less densely mottled with a pale clay colouring, but more often the mottling is spread uniformly over the whole surface, rendering the shell a uniform pale stone brown. Many eggs have one or two short, black, hair lines at the larger end.

The female will incubate the eggs for a period of around fourteen days. When the young hatch they are fed on a nutritious diet of insects including damselflies. The young birds will be ready to fledge in a further thirteen to fourteen days. Replacement broods are not uncommon, second broods are not as common.

Eggs of the Yellow wagtail 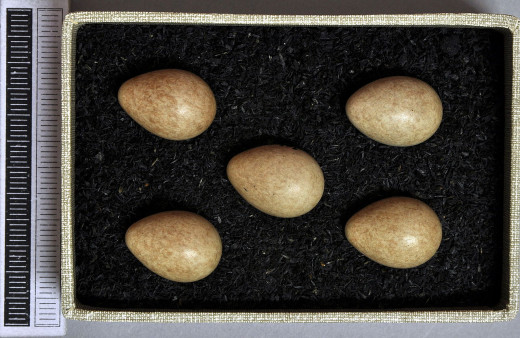 It seems the Yellow Wagtail has been in decline in the UK since the 1980's which led to the formation of the Yellow Wagtail Study Group. A BTO Common Bird Census {CBS}revealed that the population fell by 40% between 1968-1998 and on water ways the declines are worse. The BTO Water Bird Survey showed a decline of 81% between 1975 -1998,and more recent surveys suggest the decline is continuing.

They are widely distributed across much of England but the population is patchy. They are now virtually absent from Ireland,western Wales and south west England. Declines of other races have been reported in Europe. The British Yellow Wagtails winter in west Africa returning to England in March or April and leaving again in September. Breeding in upland areas and the Yorkshire Dales has declined rapidly in the last ten years or so.

The exact reasons are still unclear but it is thought that changes in land and stock management ,for example from hay cropping to silage making with earlier cutting dates result in nest destruction before the chicks are ready to fledge. Silage typically also supports fewer invertebrates than does hay. other wetland breeding habitats have been lost due to land drainage.

Changes in stock management ,ie, the increase in sheep numbers may have affected the suitability of breeding habitat and feeding sites on pasture land. Studies have revealed that territory densities on arable land that these birds prefer spring sown crops over autumn and winter sown cereals. They also seemed to have high densities in potato crops and oil seed rape.

As a breeding bird the race flavissima is almost entirely restricted to the UK. Because of this restriction it is vital that the Species Action Plan which is currently being implemented halts the decline or there is a real prospect of this race will become extinct in the UK and as a world race species. 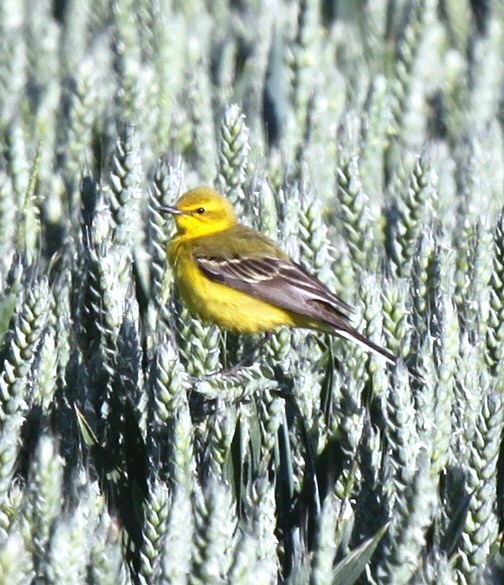 UK- Red Listed, due to declines in population/distribution of over 50% in the last forty years or so.