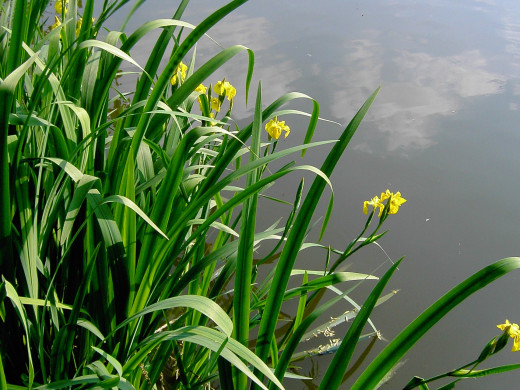 The yellow flag or Flag iris belongs to the Asparagales order of plants and placed in the family Iridaceae It has been given the genus name of Iris and the Specific of psuedoacorus which indicates a false Acorus which alludes to the leaves being similar to those of the Acorus calamus.

Their are few members of the Iris family that occur wild as a native to Britain but this species the yellow iris is by far the most common one of them all. Here we review the species, its basic biology, medicinal and other uses that have occurred down the centuries. We will look at the meaning of the common name.

It is though by scientists that species could well have been a land species before the last ice age, and only evolved as an aquatic species when the glaziers diminished and the land was left wet and damp in their wake. As always it is with a description of the plant with which we commence our review. 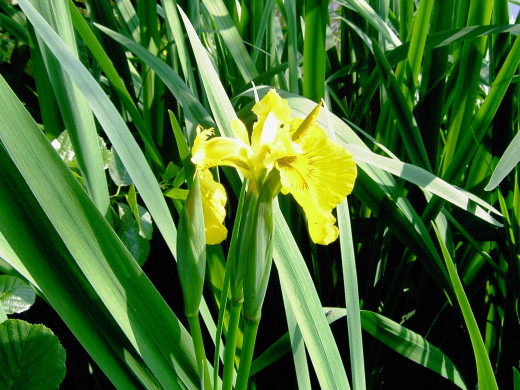 The yellow flag iris has a perennial rootstock, which may be in the form of Tubers, corms or bulbs, or in some cases creeping rhizomes, which are fleshy, tuberous,and horizontal. They are of a blackish colour externally and of a yellowish red within.

The foliage is sword shaped, usually so folded at the base that the section gives the form of saddle, the botanical name for such an occurrence is equient.

The flower consists of a six parted perianthe without any distinction between the sepals and petals, all being coloured alike. There are only three stamens, and the ovary is three celled to match, the simple style also ending in three stigmas. The ovary develops into a relatively large leathery capsule which splits into three valves, disclosing the numerous seeds.

The stems are erect and almost cylindrical, rather zig-zag at the summit, it is smooth and from three to four feet high. The foliage that springs from the root system , attain the height of three to four feet also, and are upright, broadly ensiform, striated, acute, and smooth. The flowers are situated at the top of the stems

The plant is very frequent in marshy places growing in extensive patches at times in wet meadows, woods and by the sides of lakes and ponds. they grow well also as a wetland garden species. It is indigenous to Europe from Italy to Lapland. It flowers in June and July. 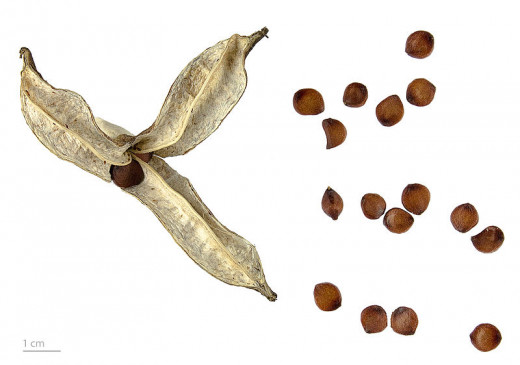 Historical facts about the name

It is usual, among horticultural historians to refer the adoption of this flower as a Royal Arms of France, to St.Louis, the ninth king of that name, who began his reign in the year 1226, but there is evidence to show that the devise was borne by Louise V11, surnamed Le Jeune, who began his reign in the year 1137, and was, perhaps, the first to adopt it, as is generally stated that no shield, seal, or other article impressed with it, as a real heraldry devise exists previous to his reign.

However, it was worn as an emblem by that monarch during the second crusades which commenced in 1145. There are no records of it being used on the Royal Standard of France before that time.

The plant was regarded as being particularly sacred to the Virgin Mary, as shown in the pleasant tale of the old knight, who, was noble and zealous, as he was ignorant and uneducated, became from conviction to a monk. being to advanced in age to acquire the 'Book of learning', which was not available to him in his early years, could never repeat more than two words of a single prayer.

These were 'Ave Maria', and with these he constantly addressed his prayer to Heaven. He uttered these words day and night until the good knight died and laid in the chapel yard of the convent. here the acceptance of his brief but earnest prayer was shown by a plant of Fluer de lys, which springing up on his grave, and blossoming, displayed in every flower the words Ave Maria, shining as golden letters.

The sight of this induced the monks, who had previously despised him on account of his ignorance, to open the grave which had produced such a miracle. They found that the root of the plant rested upon the lips of the pious old soldier who lay peacefully there. The above lines where taken from the 'Golden legend'.

History has taught those, who care to research it, that the flowers were represented on shields ages before they were used in Heraldry. This custom was shown to be universal also among the Ancient Greeks, by the authority of classical writers, and more particularly by the subjects of their painted vases. Certain districts of Greece also had peculiar emblems. Even the round shields of Mexico bore similar devices.

The Fluers de lys was first used on the Mariners' compass to symbolize the north by its reputed inventor Flavio Gioia of Amalfi, in the year 1302, who thus intended to pay a delicate compliment to the French descent of the the then king of Naples. An alternative theory for the name Fluers de lyes {or lis} is that the plant is not named after Louis, but the River Lyes, in the border of Flanders where the plant is particularly abundant.

Iris, the ancient name of the plant and preserved until today, was bestowed on the plant by the Greeks from the delicately blended hues of many species in that family, or by others, from the arc like form of the reflexed petals, though Pliny says it was so named because the variety of colours resembles those produced by a rainbow.

The flower was called, according to Philinus ' the wolf' from its supposed resemblance to the lips of that animal, and some made it the symbol of a messenger on account of the name Iris. When the leaves are bruised they have a strong smell. This gave rise to country titles such as the 'roast beef plant' in some parts of southern counties and western counties of England.

The Latin or scientific name for the plant is universal and if used by botanist alleviates confusion. As an example the name of Fluers de lyes or {lis} may be used when other species are the subject of writers, in America for instance the Fuers de lis , is often associated with the species Iris versicolor. 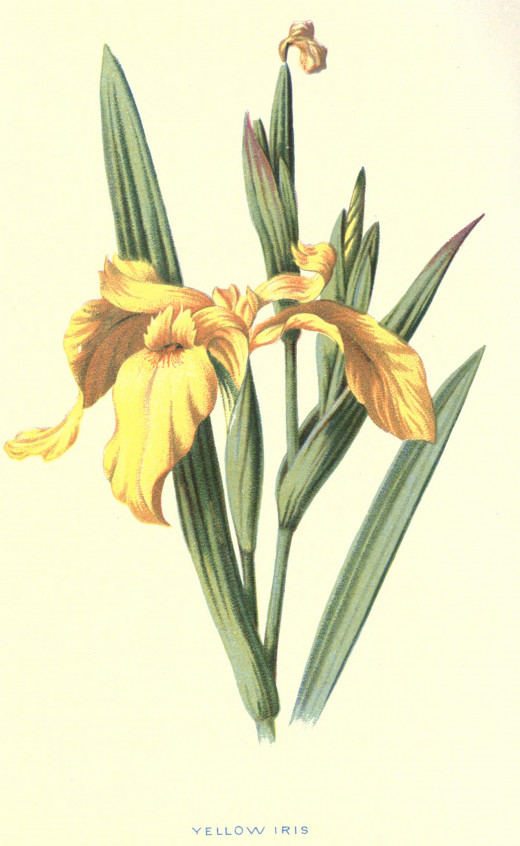 According to the British Flora Medica 1858, the qualities and general uses of the plant was as follows---The leaves of this plant when fresh are eaten by goats, and in a dry state by cows, but are refused by horses and hogs. The root boiled in water, with the addition of Copperas, has been a substitute for ink, and as a dye for woolen cloth. The flowers are said to afford a beautiful yellow dye. The seeds roasted resemble coffee. The leaves make an excellent thatch and are also used to make the bottoms of chairs.

The root , or more correctly the rhizome, is covered with a fleshy fragile parenchyma { ground tissues of non woody structures} of a greyish colour tinged with red. The odour of this plant in its fesh state is lost in drying, but its taste is styptic and rather acid, though somewhat insipid. It contains a brown extractive matter, a fatty oil, which is acrid and bitter, and a small quantity of volatile oil. Its astringent matter is extracted both by water and alcohol.

It was, according to Lady Wilkinson 1858, esteemed as a medicine for curing coughs, bruises, 'evil-spleens', convulsions, dropsy and serpent bites, and as Gerard {15th century herbalist} " doth mightilie, and vehementlie draw forth cholor"

It was even employed as a cosmetic and found favour among rustic maidens well into the 19th century. However, it was recommended to later readers to be used with caution. Gerard referred to its powers by stating " Clene washed, and stamped with a few drops of rose water, and laid plaister-wise upon the face of man or woman, it doth in two daies, at most, take awaie the blacknesse and blewnesse of any stroke or bruise, so that if the shinne of the same woman or any other person, be very tender and delicate, it shall be needful that ye laye a piece of silk, sendelle, or piece of fine laune between the plaister and the skinne, for otherwsie in such tender bodies it often causthe hete and inflammation"

Etlmuller, mentions a preparation, which enjoyed considerable reputation under the name of 'Nectar adstrinens' in cases of vomiting of blood, dysentry, and ' every other flux and haemorrhage' The root for this purpose was sliced, and if succulent, the juice or decoction was inspissated by further boiling to a thicker consistency, after which it was formed by a sufficient quantity of sugar and syrup.

Culpeper the 17th century herbalist stated that the distilled water of the whole herb is a sovereign remedy for weak eyes, either applied on a wet bandage, or dropped into the eye, and that an ointment made of flowers it is a very good on ulcers and swellings.

He also recommended, that the seeds if being used a s a substitute for coffee, should be well roasted before being ground up.

Herbals of past decades convey that the expressed juice of the fresh root was very acrid, and on being snuffed up the nostrils, produced a burning heat in the nose and mouth, accompanied by a copious discharge from those organs. hence it was recommended as an errhine snuff and sialogogue {increases the flow of saliva} and was reputedly used in a successful manner by Armstrong, in his account of 'The Diseases in Children'-, in obstinate headache and toothache when other remedies failed.

The fresh root was said to be a strong cathartic {purgative} and was administered with the best effects in a remarkable case of dropsy, by Ramsay { medical essays and Observations, Edinburgh Vol.1 page 93} Blair recommended the dried root in Diarrhoea and dysentry {Miscellaneous Observations} the dose being from one to two drachms {one eighth of a fluid ounce} of the expressed root juice. The dried root was given in the dose of a scruple to a drachm.

Mrs Greive in her book ' A Modern Herbal' 1931 states that the Yellow flag iris rhizome was formerly much used as a medicine, but from its extremely acrid nature is now seldom used.

The above information is for historical perceptions of the its medicinal uses and is not meant has guide to any home made preparations.