Wormwood past and present medicinal uses. 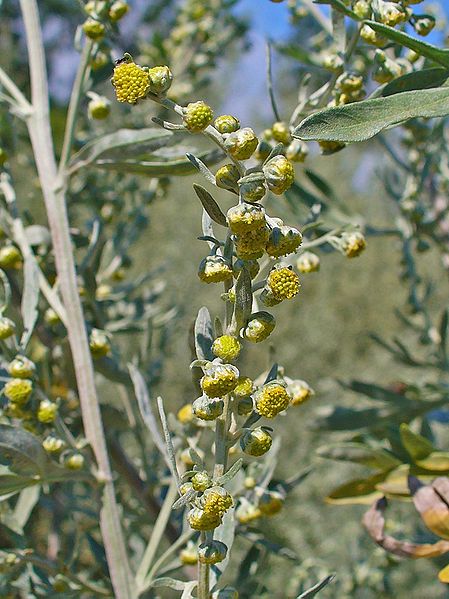 Wormwood, Artemisia absinthium belongs to the Asterales Order of plants and the family Asteraceae, formerly the Compositae, and given the genus name of Artemisia, which is named after the Greek goddess of chastity It is known by several names such as Green Ginger, Grand Wormwood, Absinthe, or common Wormwood. In this article I look at the history of the plant as regards its contribution to herbal medicine and other uses through records and historical works on the subject. To commence this review it is apt to start with a description of the plant.

Artemisia absitnthium , has a root which is perennial by nature and from it arises firm, branched, leafy stems sometimes almost woody at the base. The flowering stem is two to two and a half feet high and whitish being closely covered by fine silky hairs.

The foliage whitish is whitish on both upper and lower surfaces from the same reason are about three inches long by one and a half inches wide, cut into deeply and repeatedly in segments being narrow and blunt. The leaf stalks are slightly winged at the margin.

The small nearly globular flowers are arranged in a leafy panicle, the leaves on the flower stalk being reduced to three or even one linear segment, and the little flowers themselves being pendulous and have a greenish yellow tint. They are in bloom from July to October.

The ripe fruits are not covered by a crown of tufted hairs {or pappus} as is the case in the majority of this family.

The leaves and flowers are very bitter with a characteristicodour, resembling that of Thujone. The root has a warm and aromatic taste. They can be told from their close relative the Mugwort by the fact that the under sides of the leaves of the latter species are whitish but the upper surface is green. The lobes of the Mugwort are pointed rather than blunt.

Foliage of the similar mugwort. This species has lobes which are more pointed and the top surface is green. 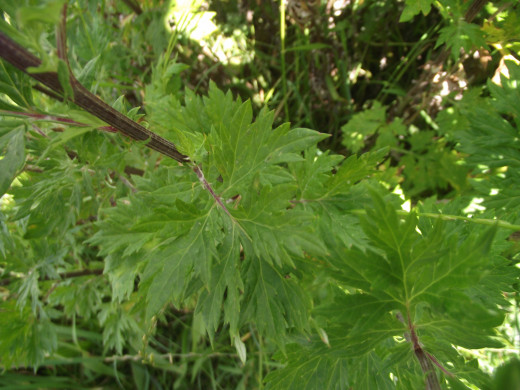 Illustration of wormwood and its components. 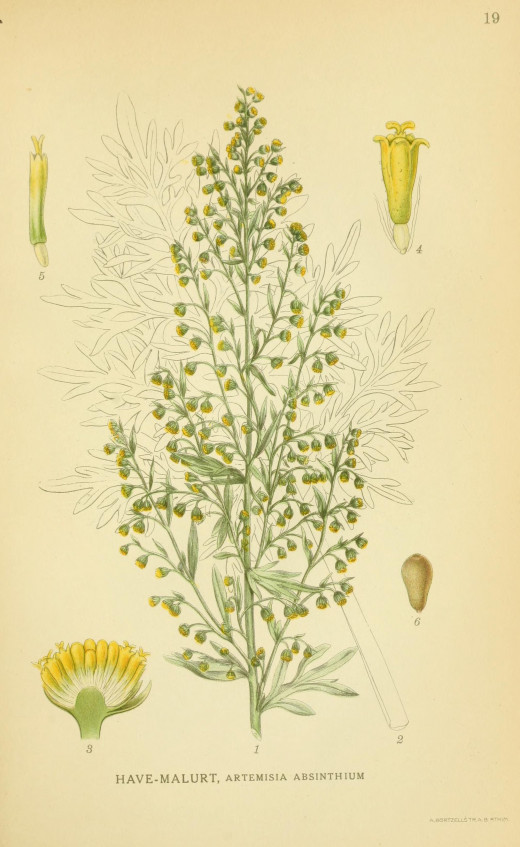 A snippet of American association.

According to the ' American Leaves and Herbs'- A Government print off-1911 " In the USA the plant {wormwood} has naturalized in places, but are thought to be the result of Garden escapes. When the plant is in flower the leaves and flowering tops are collected. these were official in the United States Pharmacopoeia for 1890. The price paid for wormwood is about four cents a pound. Wormwood has an aromatic odor and an exceedingly bitter taste, and is used as a tonic, stomachic, stimulent against fevers and for expelling worms."

" An oil is extracted from Wormwood by distillation which is the main ingredient in the dangerous liqueur known as 'absinth', long a popular drink in France, in which country however, the use of the oil is prohibited except by Pharmacists in making up prescriptions. 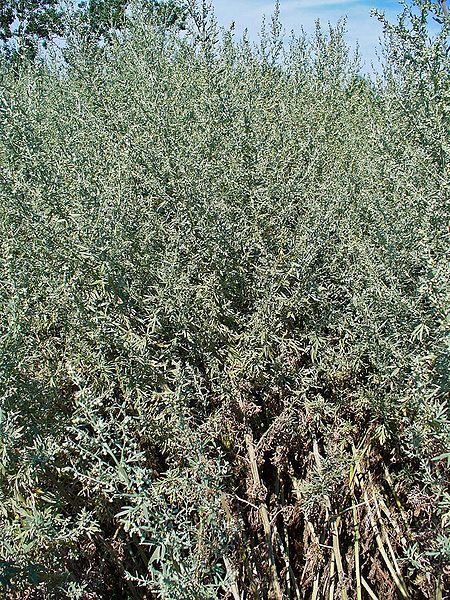 Following on from the above information it would be prudent to look into the history of this ' dangerous' liqueur known as ' Absinthe' It was a preparation mainly used in France, but as we shall see, not exclusively so. It was concocted in the main from Wormwood { Artemisia absinthium} which yield an essential oil consisting chiefly of absinthol. This oil is the basis of the liqueur, the effects of which, when taken in excess are frequent giddiness and attacks of epileptic convulsions. Much diluted doses of the liqueur, if carefully administered, will relieve ailments of the same character which are determined by physical irregularities in the body. The dosage suggested as being beneficial was one tablespoon of the absinthe in a wine glass full of cold water, taken twice a day by adult patients.

The original absinthe was regarded as being harmless medication prepared and used by a French Physician named Ordinaire, who was living as a refugee in Switzerland at the close of the 18th century. He was a country doctor, druggist, who cultivated in his garden the herbs for making absinthe, which was prepared at that time without any alcohol.

However, the French 'absinthe' of the late 1800s and early 1900s was a highly aromatic intoxicating liqueur, of an opaline green colour and with a bitter taste. It was prepared by steeping in alcohol, or strong spirit, certain bitter herbs, of which the chief species are Artemisia absinthium, A.mutellina and A, spicata, each a species of Wormwood.

The way this practice of drinking this liqueur was carried out, was by adding it to water drop by drop, or by allowing it to trickle through a funnel having only a minute opening below. Prepared in this way it was called ' La hussarde' and was commonly supplied to the cafes of France, Italy and Switzerland.

Connoisseurs indulged in absinthe as an appetizer modified by an admixture of aniseed, which was referred to as an ' agreeable and bronchitis-palliating liqueur'. records also reveal that when served sparingly at the table, and not taken habitually it was claimed to be soothing to the spinal irritability and assist persons with a nervous temperment, acting in the manner of drug remedies prescribed by doctors of that time.

Suitable doses of the diluted liqueur was claimed to promote salutary perspiration, along with the ability to expel intestinal worms. French soldiers at Algeriers took absinthe as a comforter, however, due to abuse and it being taken in excess, there were baneful results leading to it being banned throughout the French army.

Wormwood, as employed in the manner of making absinthe liqueur was also referred to as ' wermuth' or ' keep mind ' { preserver of the mind} from its supposed medicinal properties which was claimed acted as a nervine and mental restorative. 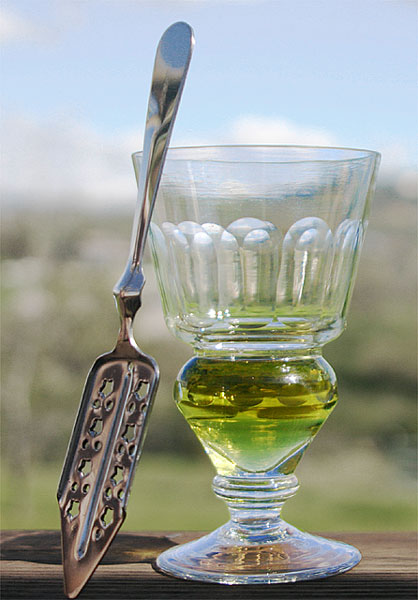 As is the case with many products there was an inferior absinthe which was popular in bars and cheap cafe's in Paris and in the French provinces, at a price of three pence {English equivalent}, per glass. This noxious liquid was adulterated with copper to produce the characteristic green colour.

If repeated doses of this pernicious stuff was swallowed in the early morning it was referred to as 'killing the worm'. Those that partook in these repeated doses suffered greatly, and many collapsed and died in the streets of Paris, either from apoplexy, or because of heart failure.

Absinthe was regularly taken in the cafe's of France and other countries. Image Google art projects Public domain. 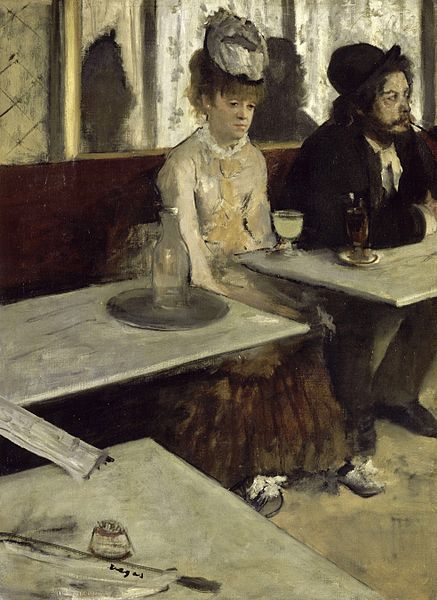 Not confined to France.

This practice was not confined to France, it was readily available in the Public houses in London's West End. The practice became popular even to the extent that to order an absinthe was regarded as a mark of some distinction. At the time , and in the face of Public popularity the St.James Gazette August 7 1902, wrote-" Absinthe is a liqueur which is particularly unsuited to the English temperment, except for medicinal uses under the guidance of a skilled doctor"

Medical observations in France revealed that absinthe liqueur exercised ' through pneumogastric nerve, a painful sensation which has been taken for the symptoms of extreme hunger. However, this sensation passes quickly if a little alcohol was given, while coffee was noted to aggravate it" It was also noted by the same medical opinion that an excessive use of absinthe on a daily basis, the stomach will cease to perform its duty and an action to the brain has the effects of blind drunkenness follow each debauch!

Conversely there was a controversial statement made by one M.Cusenier a manufacturer of Absinthe in France, who owned some impressive livestock which were the envy of his neighbours. He claimed that by liberally feeding his rabbits, poultry and guinea pigs with oxygenated absinthe they thrived and were superior to those of his neighbours, who fed them with conventional nutriments. he also, somewhat piously said-" The people of the wine and spirit making departments of France where absinthe is favoured as a beverage, are remarkably robust and healthy" 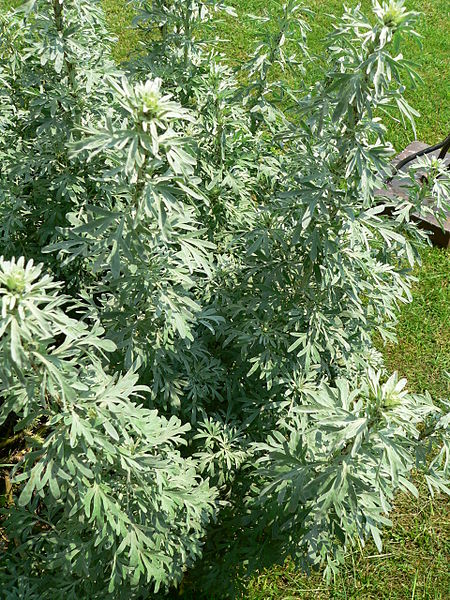 The pages on this page may be reused. However, the name of the relevant author must be attributed along with any accompanying license.

Wormwood and its other uses.

Artemisia absinthium has been grown in the herb garden for centuries because of its benefits when correctly used. It was considered to be of use as a nervine tonic, particularly helpful against the 'falling sickness' {epilepsy} as well as for flatulent indigestion.Wormwood tea was taken to relieve bilious melancholy and was said to help to dispel the yellow hue of jaundice from the skin. In some regions it attained the country title of ' Green ginger '. The leaves of Wormwood were said to resist putrefactions and was consequently employed in antiseptic fomentations. John Gerard the 16th Century herbalist wrote--" The plant voideth away the worms, not only taken inwardly, but applied outwardly; it withstandeth all putrefactions and is good against the stinking breath"Herbalists recommended the dosage and administration for Wormwood tea as follows, an ounce of the plant to be infused for ten to twelve minutes in a pint of boiling water. After the herb has been strained, the resulting liquid was then taken, a wine glass full at a time

." What savour is better, if physcic be true

For places infected than wormwood and rue?

It is as a comfort for heart, and for the brian,

And therefore to have it, this is not in vain"

Dioscorides stated that Wormwood is a preventative of intoxication, and an antidote against all ill effects. The leaves and tops were infused in ale, and then forms a liqueur known as Purl. The leaves were once dried and sold as a substitute for tea in some areas. Tea itself cost seven shilling's a pound, and could only be afforded as a beverage for special occasions one of them being an increase in the family!

Please NOTE -The medicinal references in this article are for historical interest only and are not meant as recommendations for home made medicinal preparations. Products that include Wormwood as a constitute can be purchased from health shops and herbalists, which are already measured into the correct dosage for the relevant malady.