English countryside. They may encountered in flower from March onwards. The delicate looking flowers are a joy to observe carpeting the woodland floor and banks brightening  the locality under the naked boughs still dank from winters grip.

They belong to the buttercup family Ranunculaceae.The name derives from the Latin rana and means frog and alludes to the fact that many of this family share the same damp habitat. All members of this family are poisonous and should never be taken internally. Many members are also cause irritation to the skin.

The wood anemone spreads by means of creeping rhizomes, however, they spread very slowly.Thus a colony that carpets a woodland is a sure indication that the woodland  is many decades old. Wood anemones can attain the height  of 10-25 cm. The stems are unbranched with a whorl of 3 bracts half way up. Each of these bracts resemble leaves. There may be true leaves at the base of the plant but they are few and some times absent altogether. These only appear after the flowers have faded and they are long stalked with 3 lobes.

BELOW --Woodland like this may be many decades old.Photograph courtesy of Tomasz Kuran Creative Commons.

The flowers are relatively large up to 2-4 cm across. They are solitary and star like. The flowers do not have petals but they do produce petal like sepals {referred to as Tepals}, which are white often tinged with violet beneath. These are succeeded by the fruits which are globular clusters of achens with curved beaks. The plants are considered by many to be garden worthy. They enhance sunlit shrubberies before the bushes come into leaf.

The name anemone derives from the Greek anemos meaning the wind. In times gone by some authorities wrote that the flowers would not open until the wind blows. Hence the country name  of wind flower.

The species name of nemorosa means of the woods or glades. Alluding to habitat.

Other members of the family are commonly found as garden species such as the winter aconite,Eranthis hyemalis, produces delightful yellow flowers which bring colour among the dank vegetation. They are a genus of clump forming perennials with knotty tubers. the flowers 2-2.5 cm across are stalkless and appear just above deeply divided leaf like bracts which form a ruff beneath each bloom.

These tough little plants are frost hardy and prefer partial shade and a humus rich soil,although it needs well drained soil they do not like soil that dries out excessively. The plants die down in summer. They may be propagated by division. Divide the clumps immediately after flowering while they are still in leaf.

Aconite derives from the Greek akoniton meaning a dart. In days gone by barbaric races used to poison their arrows with extracts from this  poisonous plant.

Eranthis derives from the Greek "er" indicating spring +anthos meaning a flower. The species name hyemalis means of winter and alludes to the plants early flowering.

Note the bract-like sepals of the Winter Aconite. 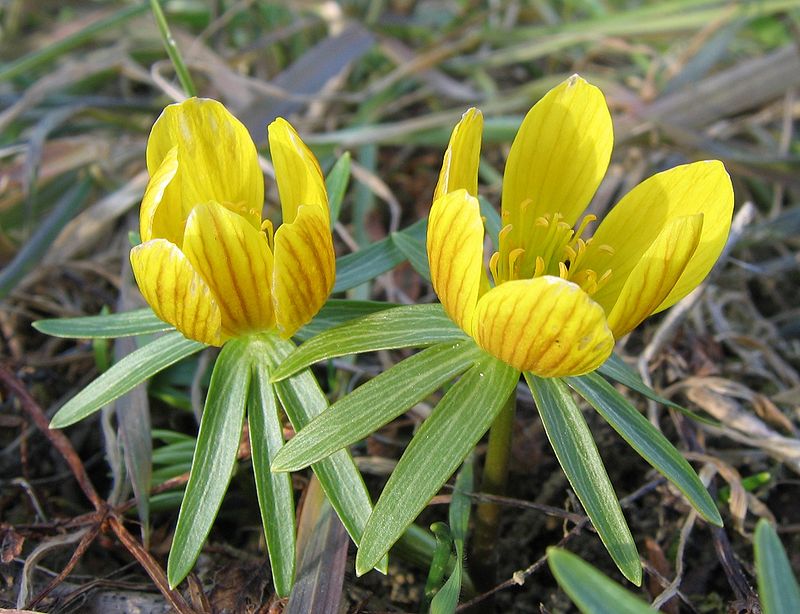 Another relative the beautiful pasque flower Pulsatilla vulgaris, is a hairy plant that may reach 30cm tall. It produces basal leaves {2-6} much divided appearing before the flowers. Each stem has a single flower and a whorl of leaf like bracts . The flowers are violet about 5cm long at first bell-shaped then opening out , they are hairy on the outside.

In common with the wood anemone the flowers are composed of petal like sepals which number 6. These are succeeded by fruits 5cm long with hairy achenes and long feathery styles. They flower from March to May. In the wild they may be encountered  on dry grasslands, mainly on chalk. The pasque flower has been used medicinally. However, in the U.K. they are a protected species and it is against the law to gather them. Being a member of the Ranunculaceae they are also poisonous.

These notes refer to the plant being used in homeopathy where they are used to treat depression,migraine, complaints of the stomach and intestines. Colds and skin rashes. It was also used for relief of tension, ear ache and neuralgia.

The active ingredients are protanemonine {in its fresh state causes blisters} but converts to the less poisonous anemonin on drying; also saponins and tannins.

Pasque derives its name from the French passerfluer from passer meaning to excel+ fluer meaning a flower. Pasque also refers to Easter flower.

The species name of pulsatilla, derives from pulse indicating " I beat" in allusion to the seeds being beaten about by the wind.

ASSOCIATED PAGES-Click on the content banners at the top of this page. Scroll down to view.

Other species of flora that feature on this site may be viewed by clicking on the individual banners. { they are all grouped together}

Flora via links. Click on the links banner at the top of this page. Scroll down to the relevant box. Click this is a direct link to the article  Includes the series  Past and Present Medicinal Uses.