Wild relatives of the Carnation and Pinks.

The Caryophyllaceae family also produces a diverse range of some of our most pretty wild flowers, that have many interesting qualities. They may lack the regal blooms of their cultivated counterparts but they tend to make up for this with their historical uses and their delicate flowers, that spring up in the countryside and some dwell in urban localities

The first under review is one of our most conspicuous  white flowered varieties which occur with the bluebells in spring. The Greater stitchwort,Stellaria holostea, sends forth its white star like petals which make a bold emphatic statement. The five petals are deeply notched and the yellow stamens enhance their overall beauty. One of its country titles is "popper" which alludes to the seed capsule that explodes with a loud pop dispersing the seeds far and wide.

The flowers are 1.8-3cm wide and are borne in loose clusters, however, they are borne singly. The sepals are shorter than the petals. The unstalked foliage is linear and grass-like, arranged in pairs along weak stems that rely on other vegetation to remain elevated. The rootstock is perennial. The flowers may be found growing in grassy places such as woodland rides, shady field margins, hedgerows, and roadside verges, during April and May. The foliage persists for many weeks after the flowers have withered.

Below--The white flowers and the grass like foliage are distinctive.

The plants common name derives from the fact that it was once used medicinally to alleviate the pain in the side commonly referred to as the stitch. Its smaller relative the lesser stitchwort is found later in the year from June onwards in more sunnier aspects. The flowers of this species as the common name suggests are mush smaller although the grass-like foliage is of a similar form. Stellaria the genus name means little star and alludes to the flower formations.

Another member of the genus is the common chickweed,Stellaria media, also as one would expect, has smaller star like flowers, this is more observable when seen from above. At first glance these small white flowers appear to have ten petals, however, the more observant will see that the five petals are deeply divided thus giving the illusion of ten. The green sepals which support the petals from beneath are ever so slightly longer than the petals. In common with the stitchworts they have sprawling stems as a rule but some do manage to stand more erect than others.

The foliage is small and oval with a pointed tip and short stalks while those higher along the stem are stalkless. Should one be inclined to look closer at the stem with the aid of a magnifying glass {hand lens} it will be revealed that on one side of the stem there is a line of hairs. When it reaches the point where the leaves grow the line ceases but then continues on the opposite side of the stem after that point. The line of hairs continues until once again meets the leaf joint then they continue on the original side of the stem. The process continues in this manner until the stem terminates.

Below the flowers of chickweed the deeply divided petals are clearly seen in this photograph.  Photograph courtesy of Kaldari, Creative Commons Share Alike.

I remember as a  young boy seeking out this plant with my grandfather, the seeds, and foliage were fed to the canaries in his charge at that time. They were regarded as a tonic for cage birds and poultry, both of which ate them with some relish. A green ointment was manufactured from the foliage which was applied to chilblains a common affliction in days gone by.

The foliage can be eaten in salads and also added to soups. Unless there is a prolonged frost this charming little plant flowers throughout the year which is a bonus for the forager. The whole flowering herb was gathered and dried, then used in infusions which help increase the flow of urine.

This humble little plant has been used to alleviate the symptoms of afflictions such as boils,eczema, chicken pox and shingles. A lotion made from an infusion of the juice of chickweed is regarded as being useful to stop itching skin. The plant has been used in the form of an infusion to relieve the symptoms of coughs and colds.  It was recommended that 2 teaspoonfuls of the herb is covered by 250ml of boiling hot water for 5-10mins. the dosage is 2 cups to be taken daily while it is still warm. The same infusion was used as a wash for wounds rashes and sores.

It is used in homeopathy  to treat rheumatism,arthritis and bronchitis.

As a final representation of the white flowered varieties of this family , which includes the sand spurrey, we must look in the grassland of meadows where they delight to grow, but it may also be encountered in such localities as sandy places and on shingle banks.  The white flowers of this species are 6-10mm wide and like those of the chickweed and they have petals which are deeply divided. The sepals are as long as the petals.

The plant takes its common name form the shape of the foliage which indeed resembles the shape of a mouse's ears. They are covered with fine silky hairs which resemble in texture the fur of a mouse. The leaves are borne opposite each other and have no stalks.

These plants produce their flowers from April onwards and they may be encountered when more timid plants keep their flowers tucked away in their buds during cold spells of early spring.

Now we review the "pink" flowered wild relatives of the garden pinks. The red campion, Silene dioica, which is a very common species of shady places in field margins,woodland edges, light woodland, and along hedgerows. they may also be encountered in shady aspects on waste land, in ditches and on rocky slopes.

When on early spring forays I seek out the tufts of oblong, hairy foliage, which are easily recognized along woodland pathways among the surrounding dank herbage. In my opinion this marks the start of spring proper.

The basal foliage is stalked the stem foliage is unstalked. From May onwards the plant sends forth a profusion of bright red/pink flowers and they will continue to flower until August or September. The fruit capsule is a swollen bladder-like structure with ten turned back teeth. The five petals are notched.

The species name of dioica {pronounced dee-o-eek-ah, } means of two houses or two abodes and alludes to the fact that the plant produces flowers of one type only,ie, all male or all female flowers. Thus two plants one of each kind are needed for pollination to occur. Below is a photograph of the related white flowered species Silene alba.

BELOW--- A close relative the white campion. Middle--- the fresh young foliage of the red Campion. Bottom---red Campion in flower.

We must seek out damp meadows, fens, marshes,or stream sides to encounter our next pink flowered member of this family-The ragged robin, Lychnis flos-culi, in my opinion it is a plant worth seeking out. It is named after its ragged pink petals, which are deeply divided into four narrow lobes. The flowers are 3-4 cm in width. below the flowers the observant will note that there are red striped sepals, that are fused together in a manner that forms a tube.

The plant may attain the height of 70cm {over two feet} and produces two kinds of leaves. The basal leaves are linear and almost grass-like {typical of the garden pinks} yet the stem leaves are broader often spoon shaped, they are arranged opposite to each other. The plant may be encountered in bloom from May until August. The rootstock is perennial.

A taller plant that delights to grow in more shadier aspects, is the pink flowered soapwort,Sapanoria officinalis. It has a robust nature reaching the height of 90cm+ (3 feet+}, The foliage is somewhat fleshy and the veins are conspicuous and oval to elliptical in form,arranged in opposite pairs.

The flowers are arranged in tight clusters. Each of the petals broadening towards the tip like the propeller of an airplane. Another diagnostic feature is the elongated green sepal tube often tinged with purple. The petals are not notched.

The soapwort acquired its common name from the fact that the leaves were once boiled to form a soapy lather for washing. I can confirm from experience that this liquid soap is as good as commercial products we pay hard earned money for. 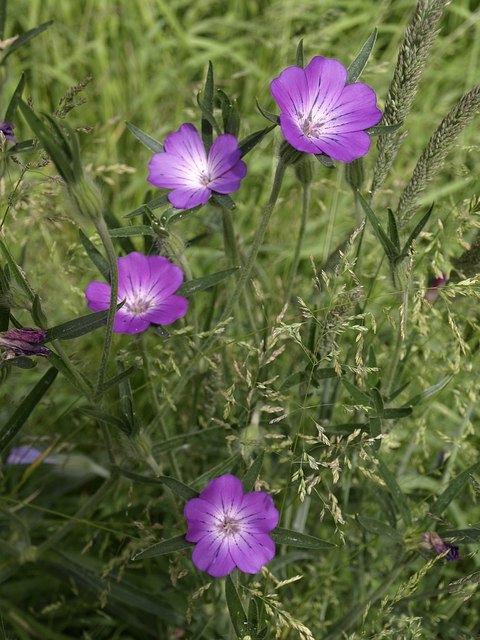 I will conclude with the beautiful corn cockle which appears like a pink jewel in the crown of a corn field. The foliage of this plant is also linear with a greyish hue. The flower is composed of five broadly over lapping petals of a deep pink colour which fades towards the center. The petals form a beautiful saucer like structure. The long linear,hairy, sepals taper to a fine point and project beyond the sepals like a star.

The flowers are 3.5cm wide and are borne singly on long slender stalks. It is another species which is in bloom from May until August. Unfortunately this species along with many other once common arable plants are becoming very rare. Once again intensive farming methods has been singled out for the plants decline. However, they appear in wild flower seed mixes and sometimes escape into the wider countryside.

Any one thinking about using wild herbs for medicinal or culinary purposes should first see the link WILD HERB ADVISE.

ASSOCIATED PAGES-Click on the content banners at the top of this page. Scroll down to view.

Other flora that feature on this site may be viewed by clicking on the individual content banners.{ they are all grouped together}