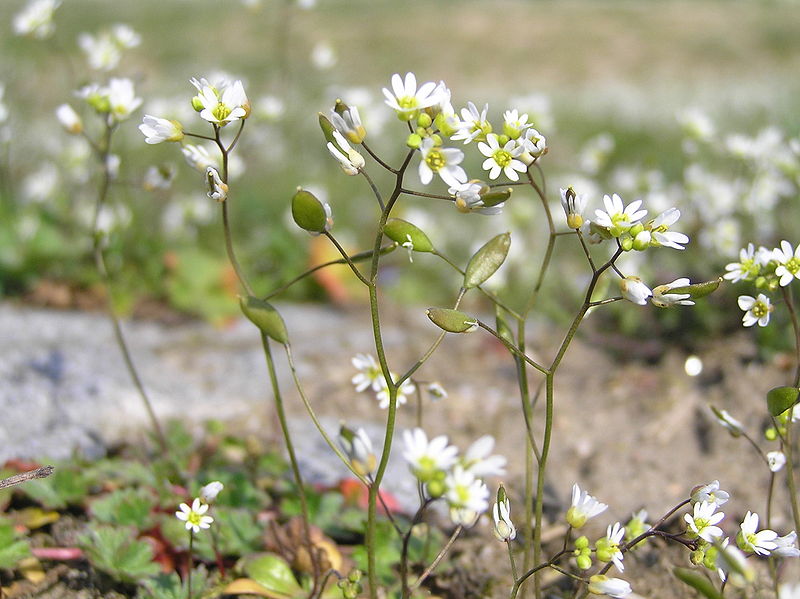 Erophila verna sometimes found under Draba verna, is the Common Whitlow grass which belongs to the Brassiacae family within the order Brassicales. Despite the common  name it is not related to the grasses.

It is found in most of Europe,including the UK , it is also found in inland western USA, North Africa and temerate regions of Asia. It is found throughout Britain on sandy soil and is often overlooked. It grows on rocks,dry walls and in dry places.

This tiny plant, one point two to four inches in height {2-10 cm} {in fruiting stage} is an annual species. The flowering and fruiting stem {Scape} is leafless. The leaves of this plant form a small basal rosette, no bigger than a large coin {see image above}. The leaves are lanceolate to oval with a narrow base quite tapered. The margins are entire or rarely toothed and the upper surface is hairy with very short stellate hairs.

The flowers are white with four petals which are deeply cut into. The four sepals below the petals are often reddish. The flower has six stamens,four long two short. They are borne on long leafless stalks in branched clsters. The fruits {seed containers} are many seeded and elliptical in shape, flat and hairless. They are borne on stalks nought point four inches long {10 mm }. The plant flowers in April and May.

The plant has a very short life-cycle and by the end of may the green parts have  withered and the seeds are ripe. Because of this quick cycle it does not rely on insects for pollination,it is indeed self-pollinating.

Medicinal uses--- It was once used to cure warts and whitlows,hence the common name. It is generally regarded as an harbinger of spring, and the specific name of verna alludes to this fact. 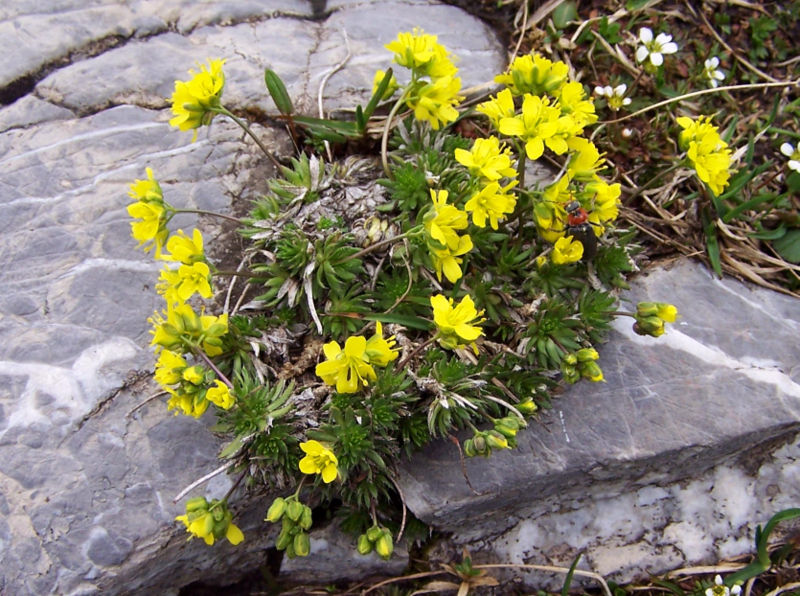 Some other relatives of the Common whitlow grass.

The yellow Whitlow grass, pictured above,  is given the Latin name of Draba aizoides, it has a wide distribution in the mountains of southern and Central Europe.

Wedge-leaf whitlow grass, Draba cuneifolia, is native to the southern half of North America.This species has white flowers.

Dense-leaf Draba. Draba densifolia, has yellow flowers and is native to western North America from California to Alaska,to Wyoming.

Three toothed whitlow grass,  Draba hispida,  has yellow flowers  and is native to Asia minor {northeastern Turkey,central Anatolia region and the Caucasus mountains. It is a sub-alpine species.

Lapland Whitlow grass, Draba lactea, is common in the high Arctic and further south to the mountains of Norway and Canada, they have white flowers.

Long podded whitlow grass, Draba longisiliqua, is a native to Caucasus. It is a species that has received the Royal Horticultural Society's Award of Garden merit.

There are many other species of these plants in the genus Draba.

Flora via Links.  Click on the Links banner at the top of this page. Scroll down to relevant box. Click this is a direct link to the article.

Flora via your search bar. Click on the content banner at the top of this page. Scroll down to relevant title. Type in your search box the shortened address. This is a direct link to the article.

All other species of flora that occur on this site are grouped together in the content banners at the top of this page.

Thank you for visiting .