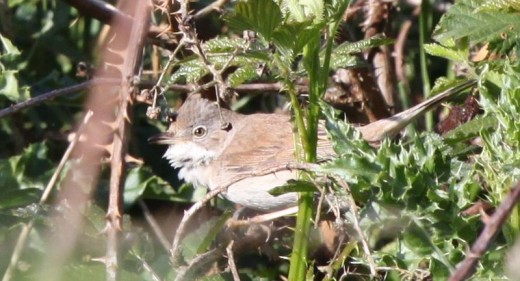 The Whitethroat belongs to the Passeriformes { perching birds} order of birds and the family Sylviidae. they have been allocated the genus name of Sylvia =wood, and the specific name of communis indicating a common species. In the UK it is classed as a migrant breeder and a passage visitor.

A drought in Western Sahel region in 1968 caused a 90% drop in the number of Whitethroats breeding in Britain, a crisis from which they have still not fully recovered. Currently here in the UK the Whitethroat is placed on the Amber list of conservation concern, due to losses of between 25-50% over the last 40 years or so. In Ireland it is Green listed {no concerns}, and in Europe it is regarded as secure. The latest UK population estimate {2009} is one point one million territories {summer}. The European population is estimated at between nine and seventeen million pairs. The numbers in individual countries varies below are some examples.

The birds breed in Europe ,central Asia and the Near East. They winter in tropical and Southern Africa.

The Gaelic name for the bird Gealan-coille, the Welsh Llwydfron and the Irish Gilphib. {Above information courtesy of the BTO}

Here we look at the bird, its lifestyle and habits. Included will be historical observations of past ornithologists and other eminent writers. As always we commence with description of the subject under review.

Male---The general colour is brown with a white throat, rufous wings and a pale bluish-grey head. They also have a whitish eye ring. . There is a bright chestnut panel on the wings. The long darkish tail is edged with white. The bill is greyish-brown and the legs an orange -brown colour.

The female has a brown head and a duller brown plumage above, beneath lighter with a pinkish buff. In relation to their body size the wings are medium short, the tail medium long, the neck short, bill short and the legs short to medium length. they have a typical warbler flight, also a special flight song. They tend to skulk in the undergrowth. A similar looking species id the Lesser Whitethroat Sylvia curruca. 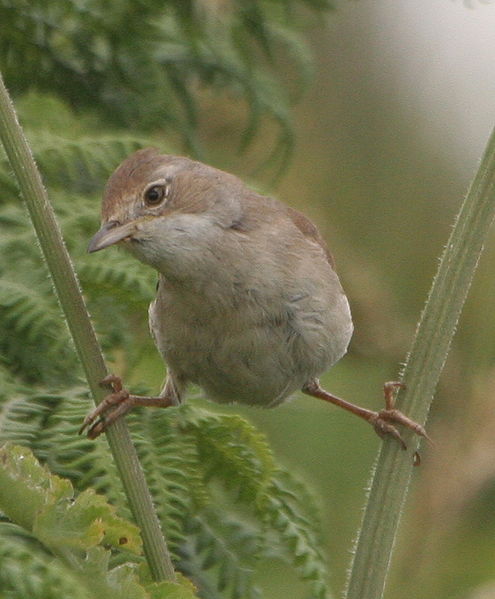 In the UK the dates upon which this bird arrives are around Mid-March in the south and mid April,in the north, but this is dependent ,of course, on the prevailing conditions. In some years the migration can be held back. This seems to have been the case in the year 1908, when a snow storm of considerable severity occurred around April 25th, with the result that the male birds did not arrive until April 30th in the south.

It is thought that when the birds arrive in the bulk it is not that they are especially numerous, but rather they migrate in companies. Migration of the sexes sometimes overlap, however, in the individual territories the female arrives after the males, sometimes the following day or sometimes a few days after the male bird.

The male , as is generally the case with all species, will defend its territory against rivals and sometimes the female will fly with him as he chases off the intruder through the tangled undergrowth.

These beautiful and elegant birds frequent gardens, hedgerows, thickets or the outskirts of woods , and unlike most of the Sylvia tribe of birds, will even make a home upon the hillsides among furze and bramble. From their habit of frequenting and even building their nest among nettles this bird acquired the country title of 'Nettle creeper'.

The Rev Morris relates this story,--" One morning in July 1835, when approaching Edinburgh, after walking all night from Glasgow, I encountered several Whitethroats, some of which accompanied or preceded me for several hundred yards, although I could not see one of these. Although it allows a person to approach very close, it flits incessantly and with extreme agility among the twigs, and if pursued, generally kept to the other side of the hedge, flying off a short distance, emits its song, sometimes on the wing, more frequently the moment it alights, then glides along, takes flight once again and sings, and so continues for a long time ".

Although tall tangled hedgerows are a favourite haunt it is by no means the only locality they frequent. They are often encountered on wooded banks with luxuriant undergrowth, Osier beds, open parts of large woodland where the timber has been frequently felled, in fact the only necessary requirement is thick tangled undergrowth in which they can quickly conceal themselves and ultimately rear their young. What is somewhat surprising is the fact that they regularly make their presence known, contrasting with most birds that inhabit this type of habitat.

Courtesy of GR3Z who has placed it in the public domain. -

Friend or foe to the gardener?

Whitethroats' at certain seasons of the year can may be regarded as a friend of the gardener, as their food, and that of their young is then almost entirely of insects and their larvae.They feed principally on caterpillars, small beetles and winged insects, they catch the latter in an adroit manner whilst upon the wing.

Anne Pratt in her book 'Our Native Songsters' 1853, says on the subject---" our Whitethroat has many familiar country names ,as to suggest the idea that the bird is a general favourite. It is called Whey bird,Wheetie-why, Churr, Muft, Beardie, Whattie,Charlie muftie, Peggy , and Whautie. The Whitethroat clears our Rose bushes, Honeysuckles and other plants of many aphids which gather on them, and is of much use too in destroying caterpillars of which it is particularly fond"

Why this is certainly true during the breeding season it turns to other food items as the summer advances. Then it takes its toll on Currants, Raspberries and Strawberries. As the Autumn advances it staple diet consists in the main of Elderberries. 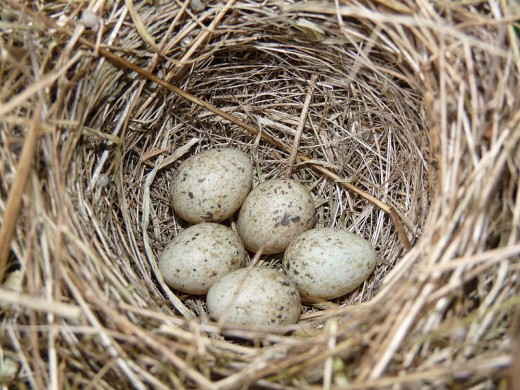 During the nesting season the male bird sings his song under varying circumstances, and consequently in varying manner. He seems at this time to be somewhat pugnacious, as when singing he elevates the feathers on top of his head, and so forms a crest. The song has been described as decidedly pleasing delivered in a joyous manner.

The usual mode of delivery is whilst the bird is fluttering at a height of about twenty feet, having risen from a sprig of bramble upon which it was sitting. then with butterfly-like movements and jerking neck, it utters its song, and then suddenly drops with subsiding song into the bramble it had only shortly left. As is the case with many species of birds, if disturbed whilst sitting on the nest, the female will often simulate being wounded, and flutter off, in the hope of attracting the intruders attention away from the nest.

The female will lay four to five eggs which both parents will incubate for 12-13 days. As a picture paints a thousand words I will let the above photograph be my description of them. 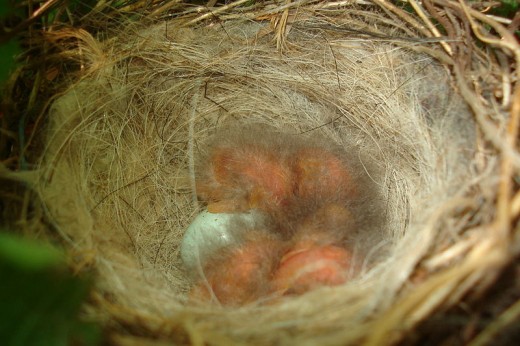 The young hatchlings are ,save for a light covering of down ,naked. blind and helpless. They are fed on a nutritious diet of caterpillars and insects for a further 12 -14 days, until they are ready to leave the nest and become independent.

If conditions are favourable they may raise two broods.

The young birds do not attain the bluish-grey upon the head until the following spring, the feathers meanwhile are brown. Neither do they have the beautiful delicate shade of pink upon the breast until they return to us in the succeeding spring.

The Autumn migration commences in September and continues until October.