White bryony belongs to the order of plants known as Cucurbitales and the family Cucurbitaceae { which comprises Squash and Melon}.

Here we review the description and basic biology of Bryonia alba, alon with its past medicinal uses in herbal medicine. This review will include the plants properties, cases where it has been used in medicinal preparations, and it s effects both positive and negative in nature.

As always, it is wise to commence with a description of our subject. 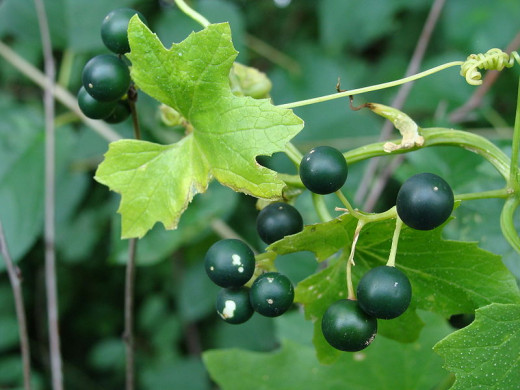 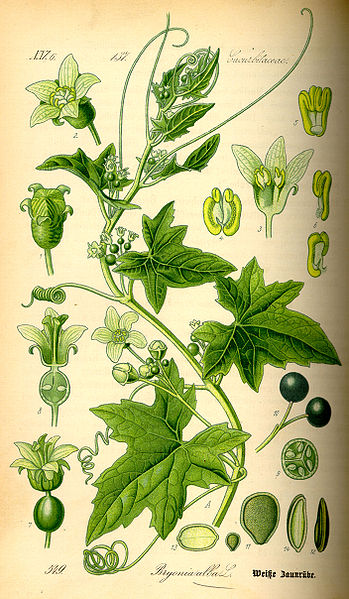 The root is perennial, very large , fleshy, of a yellowish- white colour, marked with superficial transverse lines. It is fibrous and branched towards the lower part.

The stems are generally 5-6 feet in length, are slender, herbaceous, branched, channeled, and covered with small rough hairs. They are climbing which they attain by means of numerous simple tendrils, which spring from the sides of the leaf stalks.

The foliage are relatively large and arranges alternately along the stem. They are palmated, with five  acute irregularly toothed lobes the terminal lobe being longer than the rest. They are rough on both sides with minute callous points, and supported by long stalks, from whose base the simple spiral tendrils arise.

The flowers are arranged in small clusters, which spring from the axils of the leaf. The male flowers have a short, campanulate with a five toothed calyx, a monopetalous corolla, with five ovate, spreading segments, of a yellowish-white colour. They are elegantly streaked with green veins, and three short filaments, two of which are furnished with double anthers.

The fruit is a globose berry, one celled, many seeded, about the size of a pea. At first they are green, afterwards changing to black colour as it ripens. The seeds are about five or six in number, small , ovoid, compressed and enveloped in a mucilaginous pulp.

The plant is native to most parts of Europe, frequent in England Rarer in Scotland. It has also been introduced to the USA where it has been classed as a noxious weed. It occurs in hedges and thickets flowering from May to August. { the annual herbaceous stems of the male plant generally wither and die before the end of July}, the fruit ripens in the Autumn.

The genus name of Bryonia comes from a Greek word indicating to increase or grow rapidly in this context. It was once referred to by the common names of Wild vine and Tetter berry. the red berried bryony was according to Linneaeus a variety of the white bryony, but the latter which produces black fruit is far more frequent in the northern parts of Europe.

According to Miller, the roots of Bryony were formerly carried about the country and exhibited as mandrakes by certain impudent imposters, who made much money out of the naive ways of the common people. the way they moulded them into the shape of the human figure was simple but clever. They would find a young thriving Bryony plant, and opened the earth around it, taking care not to disturb the lower fibres, and, being prepared with a mould, such as is used for making Plaster of Paris figures, they fixed it close to the root, and fastened it with wires to keep it in place. They then filled up the earth carefully to the root. As it grows very rapidly, their objective was generally accomplished in one summer. The leaves were also sold for those of Mandrake, though they bear no resemblance to each other.

The root of this plant seems to bear a considerable resemblance to that of Arum. In its fresh state it has a very disagreeable odour, and a nauseous , bitter, acrid taste, and no doubt it is poisonous. But according to the British Flora Medica [1858} " The deleterious principle may be so far dissipated by repeated washings with water as to afford a fine and white fecula, capable of furnishing an ailmentory substance, which in seasons of dearth is more valuable, as the root is very abundant and very voluminous."

Dioscorides informs us, that the young shoots may be eaten as Asparagus, but he adds ' they augment the quality of the faeces and urine.' the odour of the berries is slightly nauseous, and the taste insipid. A few of them have been eaten without any remarkable effect being produced, but in all probability they will contain some of the toxic qualities of the root.

A substance was detected by Brandes and Firnhaber in the root, to which the name of Bryonine has been given. They also revealed that the root contains a large portion of gum and starch, and a little sugar, some woody fibre, malate and phoshate of lime, and, a peculiar vegeto-animal matter.Bryony is intensely bitter, soluable both in water and alcohol and appears to be the active principle of the root from which it is derived.

Records show that the process used by M.Fremy to obtain bryonine, consisted in saturating the expressed juice with ammonia, filtering fluid and evaporating it till a pellicle { a thin skin or film } is formed on the surface The pellicle is the impure bryonia, which was purified by solution in alcohol.

During the time of early medicine and especially during the 18th,19th and early 20th centuries much of the testing of new drugs were performed on animals with no thought whatsoever about the animals welfare {or that is how it seems }. The next paragraph is taken from a medical journal which describes a trial of the substance described in the above paragraph. If you are sensitive to such reading you may well want to skip the next paragraph.

Twenty two grains of this substance killed a rabbit in ten hours, and thirty four grains thrust under the skin of the neck and back of a dog, killed it in fifty eight hours, causing extensive inflammation and suppuration around the wound, Bryonine therefore is a pure irritant, which does not appear to act through absorption. { Nouvelle bibliothque medicale May 1827}

The improper administration of the root of Bryony has been followed by violent vomiting, accompanied with fainting, intense pain, profuse alvine evacuations and other effects of an acrid cathartic. The following case is taken from the Gazette de Sante, December 1816, the writer states--" I was called a few days ago to the assistance of a lying-in woman, whose infant was dead, and to whom a surgeon in the village had ordered a drink prepared with an ounce of Bryonia root infused in a quantity of water, and a strong decoction of the same as a wash, to stop secretion of milk. On my arrival, four hours after the 'remedy' had been taken, she expired " 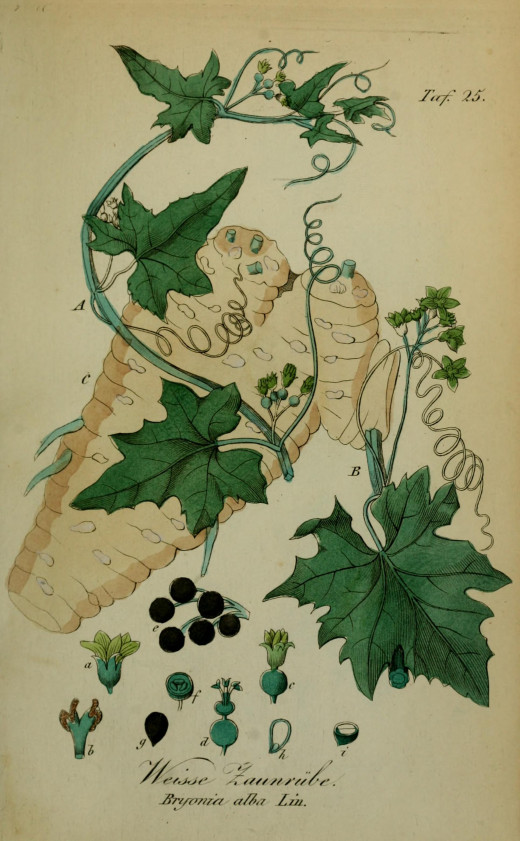 The root has long been known as a powerful purgative and a diuretic. The juice of it obtained by incision or otherwise, was a popular remedy in many countries. In Germany and Sweden for example the peasants scooped out a portion of the root and filled the cavity with beer, which in the course of the night became emetic and purgative. The milky juice will exude for two or three days together in considerable quantity and was collected when the cavity was full.

This purgative was considered to be to powerful by many herbalist and cream of tartar was added or some aromatic. Gilbert stated-" I am convinced by a series of experiments, that the root of Bryony is capable of furnishing all kinds of purgatives, from the laxative to the drastic. Several observations go to prove, that there is a species of mania depending on a vitreous slimy matter which lines the stomach and intestines , in these cases, the root, even in its fresh state, has effected a cure by evacuating this substance"

Other physicians placed on a par with Jalap and expressed their surprise that it was not more often used. Sydenham relates an instance of mania in which he said was efficacious. He gave a drachm of the powdered root in milk, or half an ounce infused with win, three or four times a day.

There are on record from archaic times unbelievable stories that allude to the plant being used as a vermifuge which expelled toads, frogs and several nondescript animals from the abdomen.

Some recipes from archaic herbals.

During my research on this subject I came across some archaic recipes for medicinal preparations. Herbalists of that time recommended that the preparations should be as follows.--

Refined sugar a pound and a half.

Let the juice stand in a basin till the feculencies {scum} subside. Then pour off the clear liquid and boil with the sugar to the consistency of a syrup.

macerate for four days in a warm place, then boil gently. Filter and express the liquid, and evaporate then strain to the consistence of extract. the dose from 5-15 grains.

The Oxymel of Bryony was recommended in asthma and old coughs, was prepared by the following method.

Take expressed juice of white bryony { after feculencies have subsided.} one pint.

Honey half a pound.

Vinegar three quarters of a pint.

Simmer the whole together over a slow fire, carefully removing the scum as long as it rises, and when it has boiled for a few minutes pour it off into an unglazed earthern vessel for use.

Note---The above accounts about medicinal uses and the recipes are for an historical interest only and not intended as advise on herbal preparations for modern day ailments. Bryony is Poisonous !!!.

The images on this page may reused. However, the name of the relevant author must be attribued along with any accompanying license.