Weevils form a large family of beetles. there is an estimated 35,000-45,000 species in the family world wide.The main characteristics of the weevils are as follows--All species have the front part of the head extended to form a beak known as a rostrum with a pair of biting jaws at the end.

The main function of the rostrum is to bore holes in plants. in these holes the female lays her eggs. Weevils,and chiefly, their larvae can be serious pests and may cause a large economic loss. for example the Boll weevil attacks cotton plants, the Plum Curculio attacks plums, peaches, cherries and apples.

In some species the rostrum is so narrow that it is thought that the adults are not capable of taking in solid food and liquid is their only means of subsistence. Weevils include species that eat seeds, the Granery weevil eats wheat and other cultivated crop  seeds. The larvae eat the plants from inside out.

Curculionidae { also known as snout beetles} is not only the largest family in the Order Coleptera, but is thought to be the largest family in the whole animal kingdom. The legless larvae of most species feed on certain plant parts such as the flowers, seeds, nuts, fleshy fruits, stems or roots. Many will feed on just a single plant species, although the adults are much less choosy. On this page we review the Hazel nut weevil. 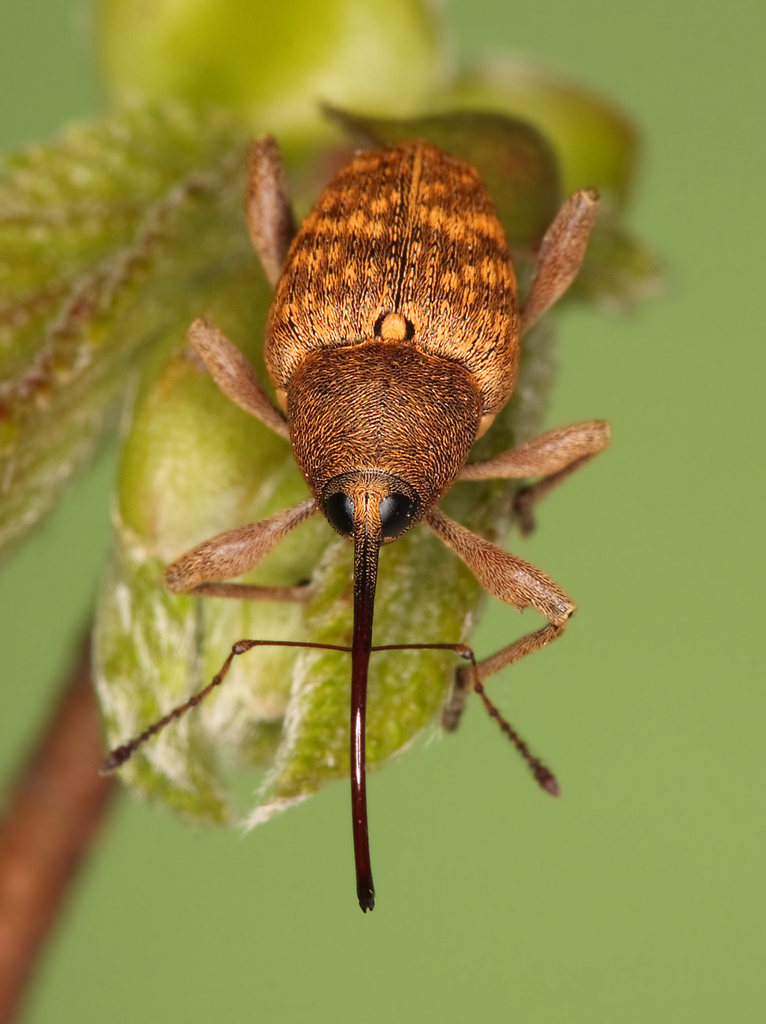 The nut weevil Curculio nucum is a medium sized beetle of the Order Coloptera and the family Curculionidae and palced in the genus Curculio. The adult is 7-8mm enitrly greyish red and covered with a strong pubescence {soft down }. The rostrum is slender, strongly curved, longer than the body in the female,shorter in the male. The body is triangular in form.

Adults appear much earlier than hazel nuts are formed and feed on the pulp of pears, peaches etc, which it punctures with its rostrum {proboscis like structure, extending from the head and bearing the mouth parts in weevils}. Later it migrates to hazel and punctures the young green hazel nuts, as well as the leaf laminae.

Attacks are often localised. The eggs are deposited by the female by way of an ovipositer. A single brown coloured egg is introduced to each nut which hatches in about 7-14 days. each female is capable of laying up to 20-30 eggs.

The grub is apodous { without legs}, relatively thick, curved, creamy white with a brown head. nature has decreed that the grub does not attain its full size until it has consumed the whole interior of the nut. the kernal which is forming is the last part to be attacked, the powerful jaws making the task easier. The whole process takes about a month.

When full grown, that is to say when the nut is ripe and falls to the ground, the grub bores a hole with its jaws through the shell and pushes itself out of the opening helped by the softness and contractable powers of the body. they then descend into the earth where they remain for the winter eventually changing into a pupae at a depth of about 10-15cm.

Studies have revealed that many larvae pupate only after 4-5 years due to a process called diapause, a suspended development in insects, triggered by an external event for example the shortening days of autumn.

It is mostly broken { development starting again}  once the organism has recorded a certain amount of cold, in this case the insect, spends the winter without needing to search for food and resumes activity when climatic conditions become more favourable.

Hazel nut weevils or rather their larvae may cause heavy losses in commercial hazelnut plantations, where they cause deformities in the nut and cause them to fall prematurely.

The hazel nut weevil C.nucum is easily confused with the weevil C.glandium which lives on oak and is often referred to as the acorn weevil. See photographs below. 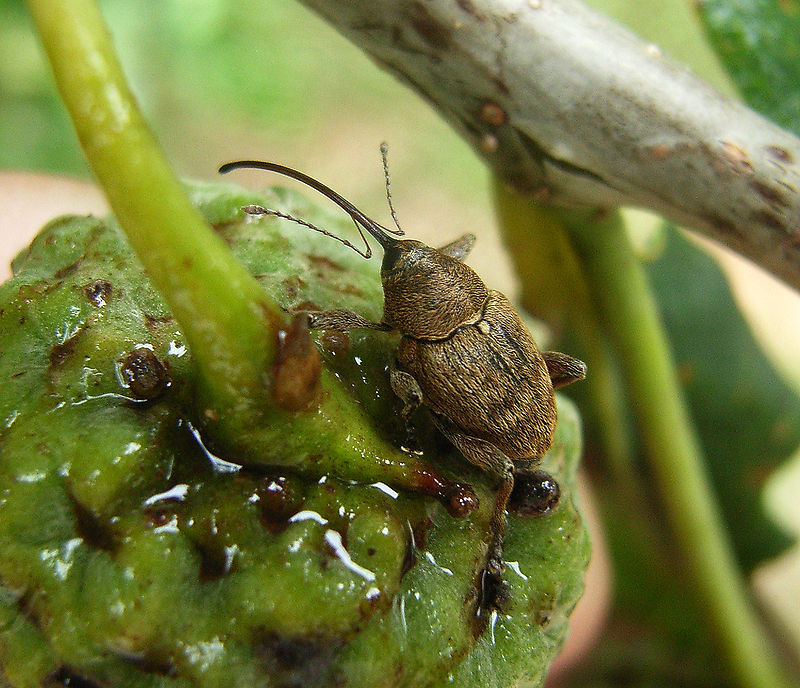 The images on this page may be reused .However, the name of the relevant author must be attributed along with any accompanying license.