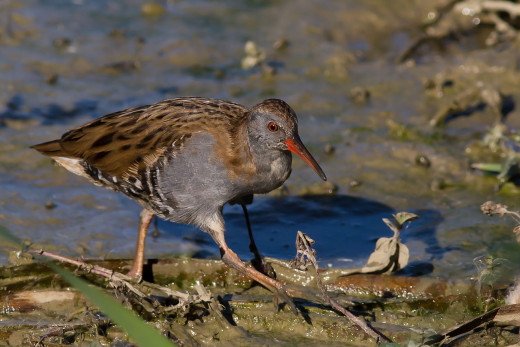 Water rails belong to the Gruiformes order of birds and the family Rallidae with in that order.The genus name of Rallus is from Latin and indicates a Rail. The specific name of aquaticus indicated water living from the Latin aqua indicating eater.

In the UK they are placed on the Green list of conservation concern { no current concerns} with an estimated 1,000 territories in summer. they are classed here as a resident breeder and a passage winter visitor. { source BTO}The European population is estimated at between 125,000 and 310,000 pairs in summer. Populations vary greatly from country to country as the following examples indicate.

They breed in Europe,North Africa and Asia in swamps and marshes. The Gaelic name for the bird is Gearradh-dubn-nan-allt, the Welsh, Rhegen y Dwr and the Irish, Ralg uisce. In Ireland they are placed on the Amber list of conservation concern {Losses of between 25-50% over the last forty years or so}. This is due to a decline in the breeding population.

The Gruiformes are an order of birds that contain a plethora of species with an equally widespread distribution. Traditionally a number of wading birds and terrestrial bird families were classified as the Gruiformes because they did not appear to belong to any other order. These include 14 species of large cranes and about 145 species of smaller crakes and rails. Indeed Gruiform means a crane-like bird.

The group that is of interest as far as this article is concerned is that of the Rails or Rallidae a huge cosmopolitan family of small to medium sized birds. The family is diverse and includes Crakes,Coots and Gallinules. many species are associated with wetlands

In America the rails are represented by such species as the Clapper Rail, Rallus longirostris found along the Atlanic ocean and Pacific ocean coasts and the King rail Rallus elegens.

Here in this article we review the Water rail Rallus aquaticus and as always commence with a description of the species under review.

Water rails in their natural habitat. 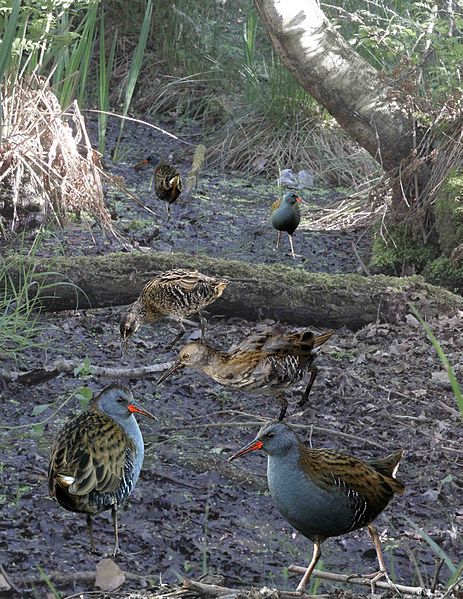 Description of the water rail.

Though not web footed it swims well and never hesitates to take to deep water. When swimming it resembles the Water hen {Moorhen},its tail raised up and its head bobbing with every stroke of its feet. If it is pursued while swimming it will dive to seek safety. The flight of the bird gives the image of being very heavy with its long legs hanging down.
The upper part of the male is olive brown with black streaks down the centre of the feather. The sides of the face,neck and breast is a dull leadish-grey,and the flanks are black,well barred with white. The legs and feet are of a brown flesh colour and are naked above the tarsal . The tail, composed of twelve feathers,is dusky, the edges of the feathers olive brown,with a little of the centre black. In flirting up the tail it displays the white beneath.
The female has the same markings but duller and occasionally shows some white barring on the wings. Variety of plumage is not very frequent despite its wide distribution range. the total length of the Water rail is about ten inches. {25 cm}.

Young birds have a brown iris, but as the birds reach maturity the eye becomes the rich orange-red of the adult bird.

Water rails feed almost entirely on worms and aquatic insects of various kinds,particularly small snails,but does not appear to take any vegetable matter unless strongly pressed by hunger.

Lifespan-- up to six years.

In the field---Like a small moorhen  with a long red bill. This distinguishes it from all other small crakes.

Movement. Except on migration the flight is weak with dangling legs. Walks and runs. It may flit its undertail coverts in the manner of a moorhen, swims and dives from water. 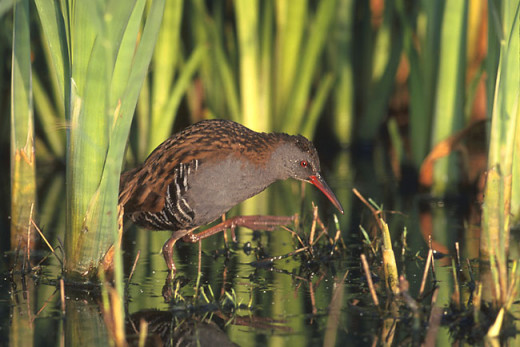 The cry of this bird is very peculiar. It has been described as the syllable 'crek', this itutters on the wing, but it often calls to its mate with a sharp whistle that Dresser {1800's} said resembles the sound produced by drawing a switch quickly through the air.

Though not often seen, their strange cries may be heard at certain hours,and almost continuously in fine weather during the summer months, however, the peculiar squeaks and grunts that are emitted would never be supposed by any one Unacquainted with their notes to proceed from the throat of this bird.

In former times the order of birds to which the rails was referred to was the Fulicaria {coots}. This shy and elusive species id very difficult to observe,it always keeps to dense vegetation growth of the marshy districts that it frequents, it is seldom seen on open water,or in dry locations.

As previously mentioned the water rail flies low near the ground,with the legs hanging down and in an apparently weak manner as if unable to rise over any height. At first it is difficult to make it rise,so it drops again as soon as it can,into the nearest hiding place. It runs with remarkable quickness in its natural resorts, threading its way among the closest stalks or wading in shallow water.

The bird is mentioned in 'The Birds of Cheshire' {NW England} 1907,where it is described as a not common visitor to the county,and though naturally rarer in the Hills.it has been obtained in the upper part of Longdendale, where one was shot high up on the moors of Woodhead in the autumn of 1894.

Although it generally keeps out of sight a water rail when surprised in the open will apparently trust for its protection to its surrounding objects.According to Coward, on the 19th of November 1887, he saw one running near the Rostherne Mere.When he was still a long way off it mounted a bare tree stump,and squatting on the top held its head horizontally,so that the beak appeared to be a twig projecting from the trunk. It allowed him to approach within two or three feet,and then ran to the water and swam to a reed bed.

In March 1893 he saw another one, near Agden,which ran into some brambles and reeds,and here remained motionless. " Its red bill and barred plumage harmonized wonderfully with its surroundings"

The water rail is a skulking bird 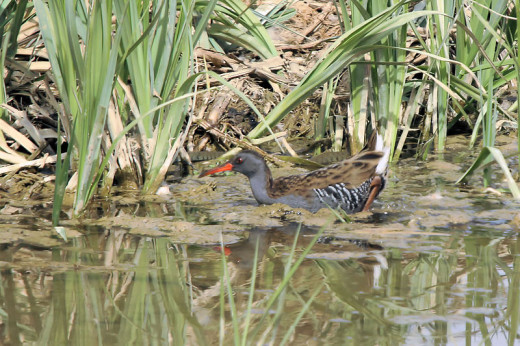 As previously mentioned the water rail never flies far when flushed,but rather seeks refuge in dense aquatic vegetation. Nevertheless,it seems capable of long flights if the following record is anything to go by. The Rev.Robert Holdsworth is quoted by Yarrell, describing the capture of this bird on the yard-Arm of a Man-of-War,five hundred miles distance from land,in the Atlantic Ocean. The bird was captured by an officer of the ship and fed on meat, in a day or two 'becoming perfectly tame'
Messrs D'urban and Mathew gave some interesting accounts on the habits in their book 'Birds of Devon' {southern England} c1800's.In that county the bird was known as the 'Skitly cock' and was met with in every warm ditch where there was sufficient cover to hide its nest,or where they could skulk in the shelter which such places afforded. The authors make the following observations. " When pressed by a Spaniel,we have seen it climb up and perch upon a bough as the Moorhen often does. we still possess eggs taken out of a nest which was placed in a hedge at the side of a drain,near a house in north Devon. When we were residents in Wales,we had some water rails about our own grounds which were semi-domesticated,and used to feed on the lawn in front of our dining room window, in company with the Moorhens. They were occasionally noticed running on the garden paths at dusk,when they looked like large rats. They could effectually conceal themselves when anybody approached."
Another author relates that after a continuous hard weather,strings of water rails may be found hanging up in the Game-dealers shops,proving that the bird is more numerous than is generally supposed to be. Frozen out of their sanctuaries and half starved,they then become the spoil of every hedge-popper. { an old title for the bird catchers.}.

Sharpe in his 'Handbook to the Birds of Great Britain' relates the following story about the water rail. " One which I shot at Avington in November,gave me a lot of trouble to secure. Our party was returning fro Duck-shooting in the water meadows,when I saw the retriever running along the side of an hedgerow,with a deep ditch of water on the side nearest to me. I crept up,thinking that it was a wounded duck,but for sometime I could see nothing of his quarry. At last I could make out something like a rat darting out from under the roots of a bush,and apparently making for the river.

" When the dog approached its hiding place again,the rail, as I now perceived it to be, instead of taking to flight and putting distance between it and its pursuer,it purposefully doubled back and running past the dog,which had an insecure foothold on the sloping bank ,scudded some fifty yards distance back along the latter,and hid up again.

" The retriever retraced his steps,and again drove the rial upwards towards the river, but the bird repeated its doubling manoeuvre., and the dog had to resume the chase again from the starting point. At last the rail took to flight and flew across the river with reluctance,with its legs hanging down when I shot it. During the whole of this chase the bird uttered no sound."

The flesh of the rail is very sweet and 'toothsome',but there is so little of it,that we have never considered it worth while to lift our gun against the bird for the sake of the spit,says Butler,who continues, although so common a bird,its shy and retiring habits prevent it from being generally known. We often have specimens brought to us as something very rare,and we once found one hanging up in the bar of a hotel,waiting for some one to say what it was, it had been there for several days and no one could name it"

According to Morris {1907} " This bird is very good to eat. It is preserved without difficulty in confinement and associates amicably with other birds, but is naturally shy and vigilant,and does not appear to be very tame. One is mentioned by Yarrell as having exhibited a pugnacious disposition. Another kept by Meyer, would snap up its food from a pair of Godwit's kept with it. The way it had been obtained was interesting,it appeared to have taken refuge in a hen-house,and on the oner putting in her hand to take the eggs,caught hold of it " and so it was drawn out" 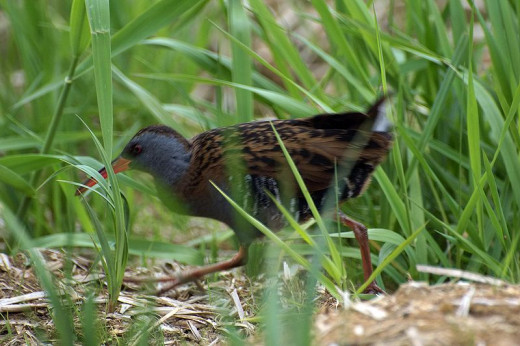 The nest is composed of coarse grass and is well concealed among aquatic plants,and frequently found among willow-beds. Mr. Wolley,mentions one which was built upon rushes floating on the water,and another upon a clump close to its margin.

Suanders' describes the nest he discovered about a foot from the ground " but had a solid foundation under it,formed by roots of the clump of rushes,in the midst of which it was built. It was carefully made of flat sedge,and the flat leaves of reeds,lined with dry,broken pieces of round slender reeds"

The eggs are cream coloured speckled with brown,some may be almost spotless,others clustering around the large end. Another author relates the eggs may be double spotted,the underlying spots being lilac -grey,and nearly as distinct as the over-lying ones. As a rule the rufous spots are small but occasionally they are large and form blotches towards the big end of the egg.

The female will deposit 6-11 eggs in her nest. The incubation period takes around 19-22 days and the task is carried out by both parents. Fledging occurs in a further 20-30 days depending on conditions. The young birds are clothed in black down and are very expert at hiding in the coarse water vegetaion in which they are usually produced. 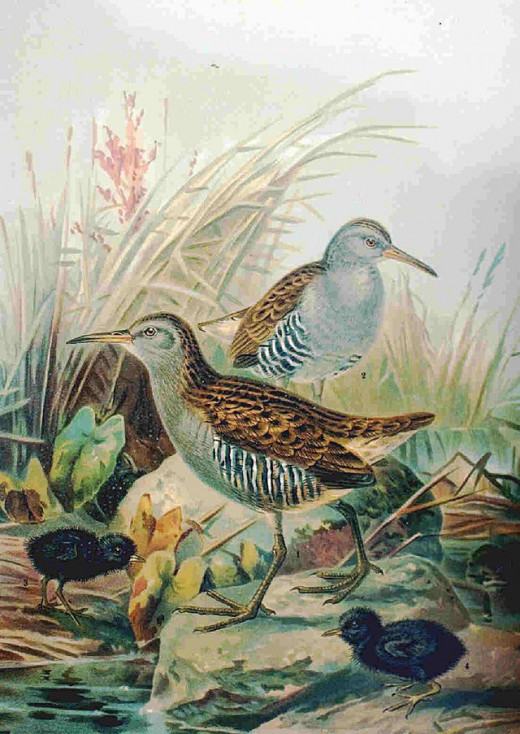