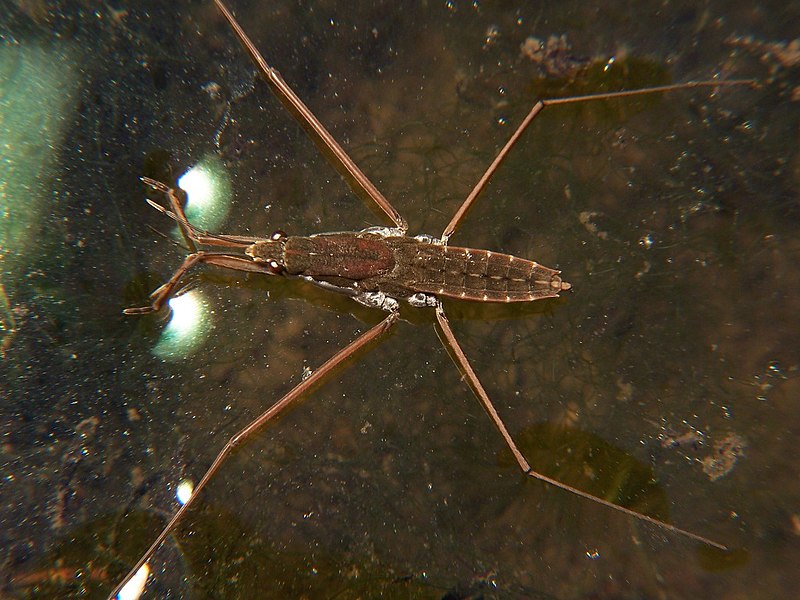 On this page my intention to teach children about water insects. It is a sequel to ' Is it an insect-children',  see content banners above. Here we look at the insects that are aquatic either, as young, or as adult insects and their lifestyles.

Water beetle out of water.

Although insects are primarily creatures of the earth and air, many have adapted to live an aquatic lifestyle. Yet there is no hard and fast rule that separates these from their terrestrial counterparts for many of their larvae feed habitually in semi-liquid mire or water-logged soil,while many insects, especially beetles, frequent marshhy spots,and are equally at home on land on in the water.

Numerous bugs  {Heteroptera} frequent water at all stages of their lives, but they breathe atmospheric air and they drown quickly if they are forcibly held beneath the surface. Many insects such as the Water boatman have well developed wings in the adult stage and may fly freely from one pond to another, especially after nightfall.

Pond skaters {water striders -see image top of the page} , which glide over the surface of the water, also spend a lot of time in the herbage upon the banks. Indeed they walk upon the water ,or rather upon the elastic film surface where water and air meet. Their body and legs are covered with fine hairs which tend to repel moisture. They are seen frequently lifting their legs into the air to dry them. If their feet become wet they sink below the film surface.

Another interesting group of insects that dwell on the surface are the whirlygig beetles,whose middle and hind pair of legs are paddle-like. They spend most of the time skimming over the surface film, but dive rapidly, when danger threatens.

Their larvae or young stay completely  submerged but when fullgrown they creep  up the stems of a water plant and spin their cocoon.

I suppose, the best known water beetles, are the diving beetles. 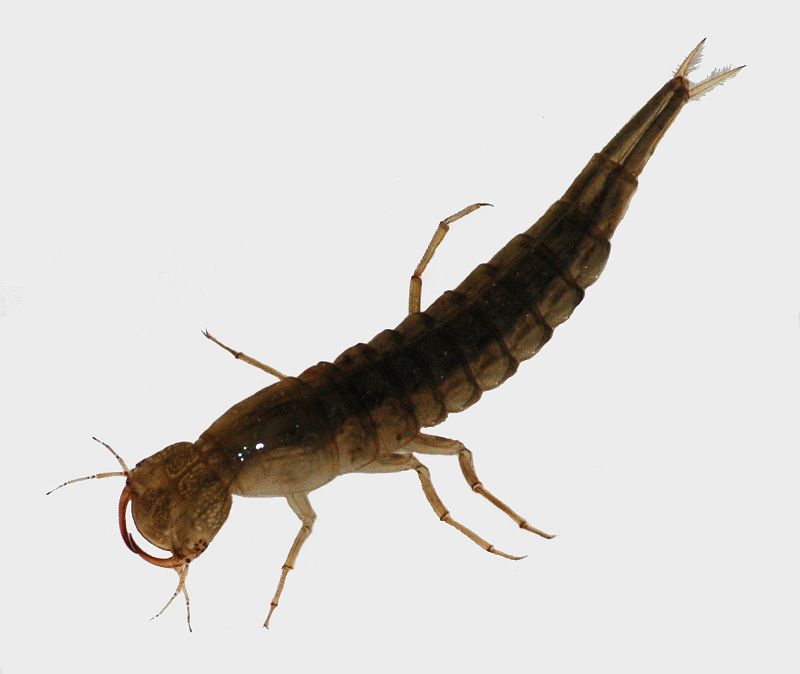 The family Dytiscadae { from Greek meaning able to dive} is typified by the Common Diving beetle Dytiscus marginalis.  It is also known as the Great diving beetle. This insects body is oval, somewhat flattened with a highly polished surface,and the various parts are so closely together in their placement as to look like they are one continuous outline. The great hing legs are modified to form a pair of oars, which are palced far back below the body of the insect. This arrangement means that the legs can be used to be brought up at right angles to the body and so allowing a strong,wide sweep. As well as the tarsi {joints of the leg} are covered with stiff hairs and they are flattened which enhances the legs actions as oars. They are normally used together but can be used one at a time so as to help the insect turn around in tight spaces. In other words they are highly adapted to their aquatic lifestyle.

On land they are clumsy walkers but their broad wings enable them to make long flights in the air. If one pool or pond is not to their liking they wait until it is dark and simply fly away to another pond that is more to thier liking.

The larvae {pictured above} are voracious hunters and when they are fully fed they leave the water and burrow into the earth  where they change to pupae. The main problem for aquatic insects is their need for oxygen. It is a fact that insects breathe through tiny tubes in their body called spiracles {is it an insect-children} in the content banners above. However, it is clear these would not work underwater without some kind of modification.

In Dytiscus species these spiracles are not on the sides of the body as is the case with terrestrial {land} insects but upon their back below the elytra. {A hardened forewing}. Also the hind spiracles are unusually large and fit, and the elytra fit perfectly against the abdomen so that an airtight space is formed between them an the insects back. When the beetle needs to take in oxygen it thrusts its tail end through the film on the surface of the water and slightly depresses the tip of its abdomen and as a result air rushes into the four large spiracles and fills the space between the elytra and the back. This done the beetle is ready to dive once more. This process is thought to be repeated every eight minutes or so.

The larvae  thrust their tail end through the film to beathe in the required oxygen level to maintain their aquatic life. The insects mentioned so far live an aquatic lifestyle,however, as we have seen, they need to keep supplying themselves with oxygen if they are to survive.

Nymph or larvae of the Mayfly.

Insects that remain under water.

The insects so far reviewed would all die if they were forcibly made to stay underwater. However some insects remain under water permanently surviving on  'mixed air' { the air which is mixed with water.}. In the very young nymphs of some species such as mayflies and some dragonflies aeriation of the blood is affected through the skin. However, as they begin to grow larger specialized gills begin to develop. These are very diverse in form and where abouts on the body they are placed.

In Whirlygigg beetles the gills are carried on the sides of the abdominal segments they are branching or leaf like in form, the same applies to the nymphs of mayflies and those of alder flies. Other species carry their gills like tails at the end of the body. As these insects enter the final stage of thier development { the final imago} the gills are lost {with  a few rare exceptions} as the imago turns into the adult form.

Stoneflies, Mayflies dragonflies and caddis flies stages before the imago are all aquatic. Breathing ' mixed air' in the water or by means of gills.

Other means of living in the water.

All kinds of aquatic creatures have evolved to live and breathe in water and between them make up a fascinating liquid  world. A unique habitat, that is well worth discovering . The insects and their nymphs are worthy of study and many hours may be spent in this pursuit.  The above mentioned methods of their breathing is only a small sample of the way these creatures obtain enough oxygen to survive in their watery world.

Many other species of insects are featured on this site and can be found in the content banners above..