Water hemlock whose name  can be confused with Hemlock water dropwort {pictured below} belongs to the Apiaceae family of plants { formerly the Umbelliferae}. latin names used in the past include Cicuta aquatica, Coriandrum cicuta and Sium majus alterum angustifoilium.

Once again we review a plant from the Apiaceae family which contains for instance the parsley,carrot,and celery which beneficial to human health. However, many others of this family are very similar looking to benign members of the group but are very poisonous for instance Hemlock, Fools parsley and Hemlock water drop wort {pictured above} whose stems are very like celery.  Thus great care is needed when gathering members of this family for culinary purposes or for medicine which is intended for internal use. Never eat anything from this family unless you are certain of its correct identification. To this end I will try to give an accurate description of the Water hemlock, Cicuta virosa.

The root of this species is perennial, very thick and hollow of a whitish colour. it is divided by transverse partitions into several large cells and furnished with many fibres, disposed in whorled fascicles. {Towards the end of autumn, the root for the succeeding summer is formed out of the lower  part of the stalk.  this is divided into many unequal cells, so that it becomes specifically lighter than water, and in winter when the water swells it is buoyed up. The old root then rots, floats all the winter, and in rivers is frequently carried great distances. In spring the old root is washed away, and the new one, on coming near the soil, sends out many slender fibres by which it is again fixed, grows and flowers.}

The stem is erect, large and hollow, branched, leafy, slightly striated, glabrous, light green and attains the height of 2-4 feet high. The leaves are alternate, stalked. The lower ones are sometimes three times divided and the whole leaf is 12-16 inches long. The leaflets are lanceolate with deeply toothed, nearly sessile segments.  The leaf margins are white at the tips.

The umbels {flower heads} are large of many rays {umbrella like spokes}, both opposite the leaves and terminal. The calyx of the small individual flowers is divided into fine small ovate-deltoid, acute spreading segments. The corolla is white sometimes with a slight green tinge. There are five petals, inflexed at the points.The stamens are longer than the petals and are tipped with flesh coloured anthers. the individual flowers are grouped to form the umbels.

The fruit {seed case} is roundish, compressed at the sides, oval in shape, with two small styles that bend in opposite directions.

The water hemlock is found in ditches and by the margins of rivers and lakes, though rather local in England, but much more frequent in the lowlands of Scotland. It flowers July and August.

Cicuta was a name given to the space between the joints of reeds, used as a shepherd's pipe, and hence applied to the plant, which has hollow stems. it is doubtful whether it is this species or the common hemlock is the Cicuta of Pliny. {hemlock being the plant used to poison Socrate. Haller is of the opinion that this poison was obtained from Cicuta virosa, and not from Conium maculatum. but if the account of the death of Socrates, in the 'phoedon of Plato' is a correct one and not embellished by a unreliable narrative, the same objection applies to one as the other.

It is astonishing that Cicuta virosa should be associated by some old botanists with Sium, or water parsnip, and called by Gerard {1500s} 'long leaved water cress' without any allusion to its poisonous properties. this plant is generally intented by the old authors when they use the term Cicuta, but the spotted or common Hemlock was also called Cicuta, and there is reason to fear that they have sometimes been confounded. To confuse matters further, the Oenanthe phellandrium/Phellandrium aquaticum has also been called water hemlock and fine-leaved water hemlock.

Hemlock was often confused with Cicuta virosa by some of the old botanists. The blotched stem of Conium maculatum. Courtesy of MPF CC BY-SA 3.0 license. 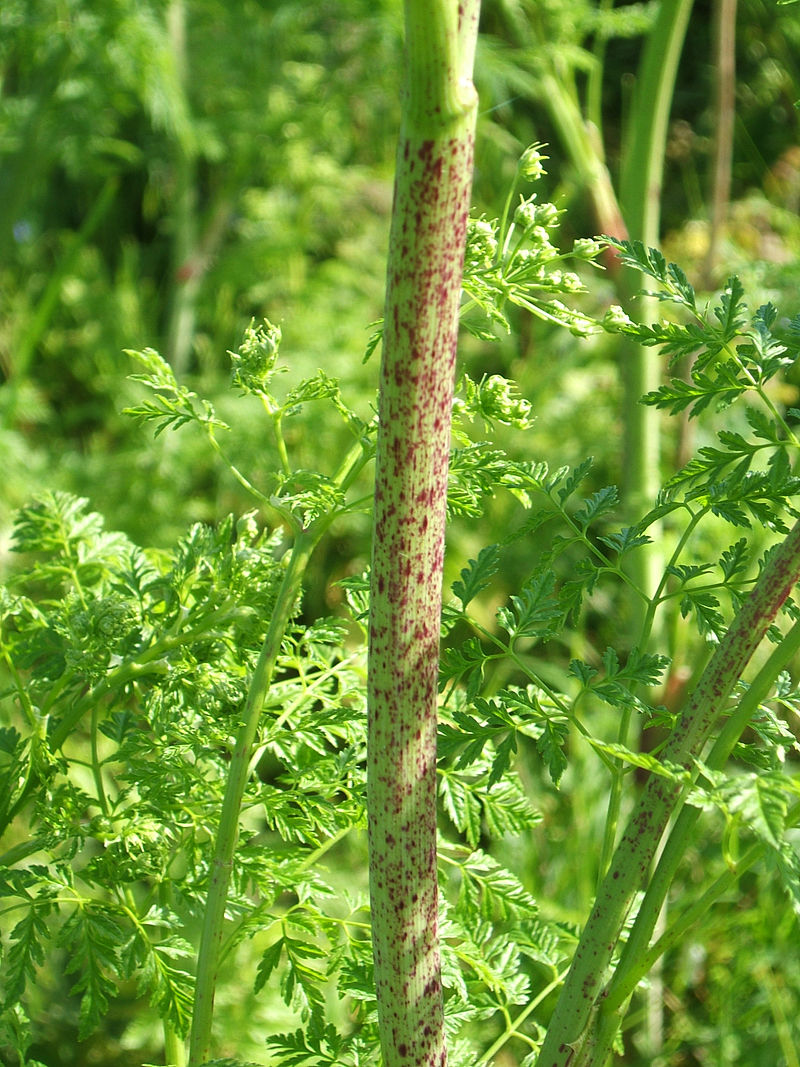 In the Britsh Medica Flora  the author states another example of this confusion--when he writes " This may be observed when Wepfer {Cicutae aquaticae Historia et Noxae 1697} indeed confounds the Water dropwort {Oenanthe aquatica} with Cicuta virosa;and it is not improbable that the same error has been commited by others who speak of the roots being eaten in mistake for parsnips, unless indeed , we ascribe to those who partook of them more than a common ignorance;the large annular hollow root having very little resemblance to a parsnip"

The qualities of Cicuta virosa to this end I turn to the British Flora Medica {1858}, which states---The root wounded in spring, pours forth a juice of a yellowish colour, which is principally contained in the vessels of the cortical part. It has a heavy narcotic odour and an acrid hot taste.

The lower leaves are said to have the same properties in a lesser degree. The foliage when bruised smells like celery, but is more pungent and its flavour has been compared to that of celery. Wepfer has remarked on the wounded parts of the main stalk small concentrations of a bluish transparent viscous substance, of a slightly acrid nature.

Gadd, states, that when the plant vegetates in stagnant pools, a liquid of an oily shining appearance may be observed on the surface of the water. From the experiments of Gadd, we also learn that by distillation it affords a volatile narcotic principle of an unpleasant diffusive odour, affecting the head, but the residue is apparently inert, and was given to a bird without producing any effect.

It appears that both in the narcotic and acrid principles are of a volatile kind, so that even the roots in their dry state have been given as food to cattle. When cultivated in a garden, it is reputed to lose its virulent properties. 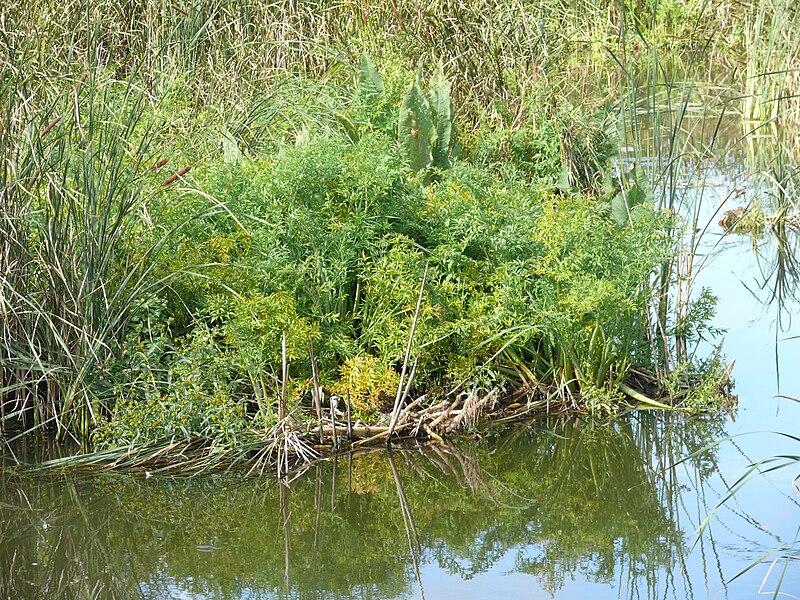 Poisonous properties-Historical cases. Warning the article relates to the death of a child which some readers may find disturbing.

The whole plant is poisonous to most animals. According to Withering, cows often eat it in the spring and are killed by it, but as the summer advances, and its scent becomes stronger they carefully avoid it. Though a certain poison and fatal to cows, goats devour it with impunity. Horses and sheep are said to eat it safely { source Withering Botanical Arrangement Vol ii p382} Gmelin asserts that it is innocuous to horses but Gadd denies this. of its poisonous effects upon cows there is no doubt. three oxen have died from eating the roots, which were thrown by the current in spring upon the banks of the river near Roslagia in Sweden.

The roots appear to be most virulent in spring, and the foliage in summer. The effects upon man are those of a powerful acrid narcotic. Wepfer tells us of eight children who ate of the root, mistaking it for parsnip. One of them quickly experiences great pain at the pit of the stomach. he was then seized with convulsions and became insensible. The jaws were locked, the eyes rolled, and blood issued from the ears, he had frequent hiccups and efforts to vomit; and during the convulsions the head was bent backwards, and the spine so arched that a child might have crept between the body and the bed beneath. he gradually became weaker, and his death took place about half an hour from the first symptoms. After death the abdomen and faced swelled, a slight lividness was observed near the eyes, and a greenish froth issued from the mouth. Another of the children died, and of the six who survived, a little girl  had tetanic fits followed by a complete coma, which lasted for 24 hours.

Boerhague, states that a gardener employed in gathering the herb, was attacked with vertigo. Schubarth, {Archiv fur medizin, Erfuhr 1824} affirms that an ounce of the juice of the stems and leaves, collected after the flowers had begun to blow, produced no effect upon the dog.

Referring to the cases given above, Guersent { Article Cique Diction des Sciences Med} observes that the following are the usual symptoms;--" A dimness of sight, vertigo, acute headache, staggering, agitation, pain in the stomach, dryness of the throat, great thirst, eructation, vomiting of greenish matter , respiration frequent and interrupted. tetanic contractions of the jaws, lipothymia, sometimes followed by a tethargic state. At other times furious delirium, or attacks resembling epilepsy, which generally terminated in death.

The most serious derangement of the nervous system takes place the more rapidity in proportion has been to the quantity of the root swallowed, unless, indeed, a portion has been promptly rejected by vomiting.

The British Medica Flora States cases of poisoning by Cicuta are, happily rare, and we know of know instances in Britain.

According to the British Medica Flora---the properties of this plant as an internal remedy, can scarcely have been essayed by any practioner, although both as a poison and as a therapeutical agent, an investigation of its powers would not be less useful than interesting. it is presumed to be analogous to the Conium or common Hemlock, and still more energetic in its effects than that  vegetable, for which, indeed, it is substituted in the Danish Pharmacopoeia . We have several accounts of its empirical use externally.

Thus in an endemic disease prevalent in Westphalia called Varen, resembling 'wandering gout', in which abscesses are formed, a cataplasm of the root has been applied with success. the Siberians use it in the same form as a remedy for veneral herpes, and in pains affecting the back and ischiadic region, they rub the part with bruised root, taking care not to touch the spine, lest the malady should be aggravated. in Norway it was used as an external remedy for gouty pains. 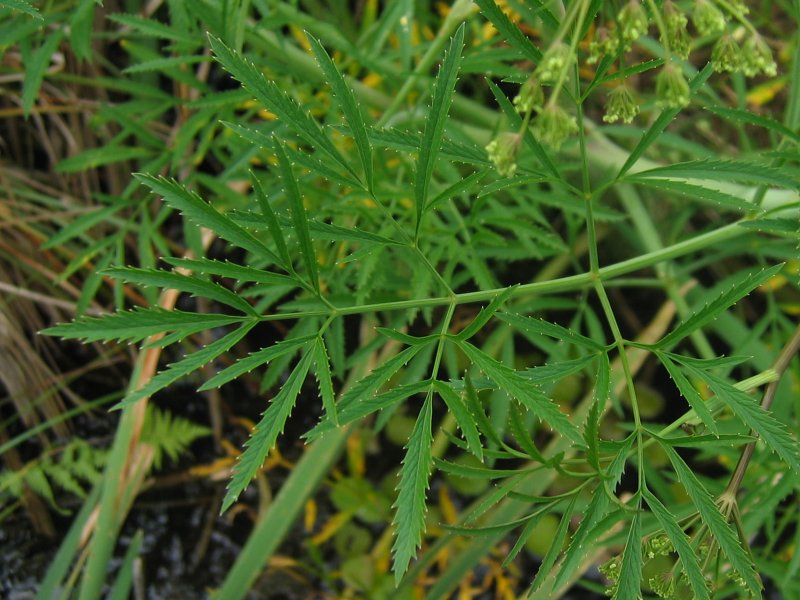 The images that occur on this page may be reused. However, the name of the appropriate author must be attributed  along with the relevant license.

Other members of the Apiaceae, that feature on this site includes--

All other species of flora that feature on this site can be viewed by clicking on the relevant content banners on the right hand side of this page. { they are all grouped together. }

Flora via links. Click on the links banner at the top of this page. Scroll down to relevant box. Click this is a direct link to the article{s}. Includes the series Past and Present Medicinal Uses.