Viper's bugloss, Echium vulgare,also known {USA} as the Blueweed, is a member of the Boriginaceae within the Order Boriginales and in many regions of the world is classed as an invasive weed.

The name bugloss derives from Greek origin and signifies Ox's tongue, and was applied to it because of the roughness and shape of the Leaves.  It is a showy plant covered with prickly hairs.

The stems of this species grow from two to three feet high and are covered with bristly hairs as   are the leaves, which are four to five inches long , lanceolate and stalkless, entire and rough on both the upper and under surfaces. The stems are often spotted with red , the spotting occasionally occurs on the leaves also. The roots leaves form a basal tuft two feet wide sometimes more , these leaves have stalks.

The flowers which are coiled in bud form a spike of closely wedged flowers all pointing the same way. When they first open  they tend to be rose coloured turning a bright blue as they mature. Individual flowers are 1.5 -2 cm wide. The flowers are irregularly tubular and funnel- shaped.  They bloom from June until very early August.

They are encountered in the UK on old walls ,old quarries and gravel pits, dry open places, roadside verges, sand dunes and shingle and often on disturbed ground. 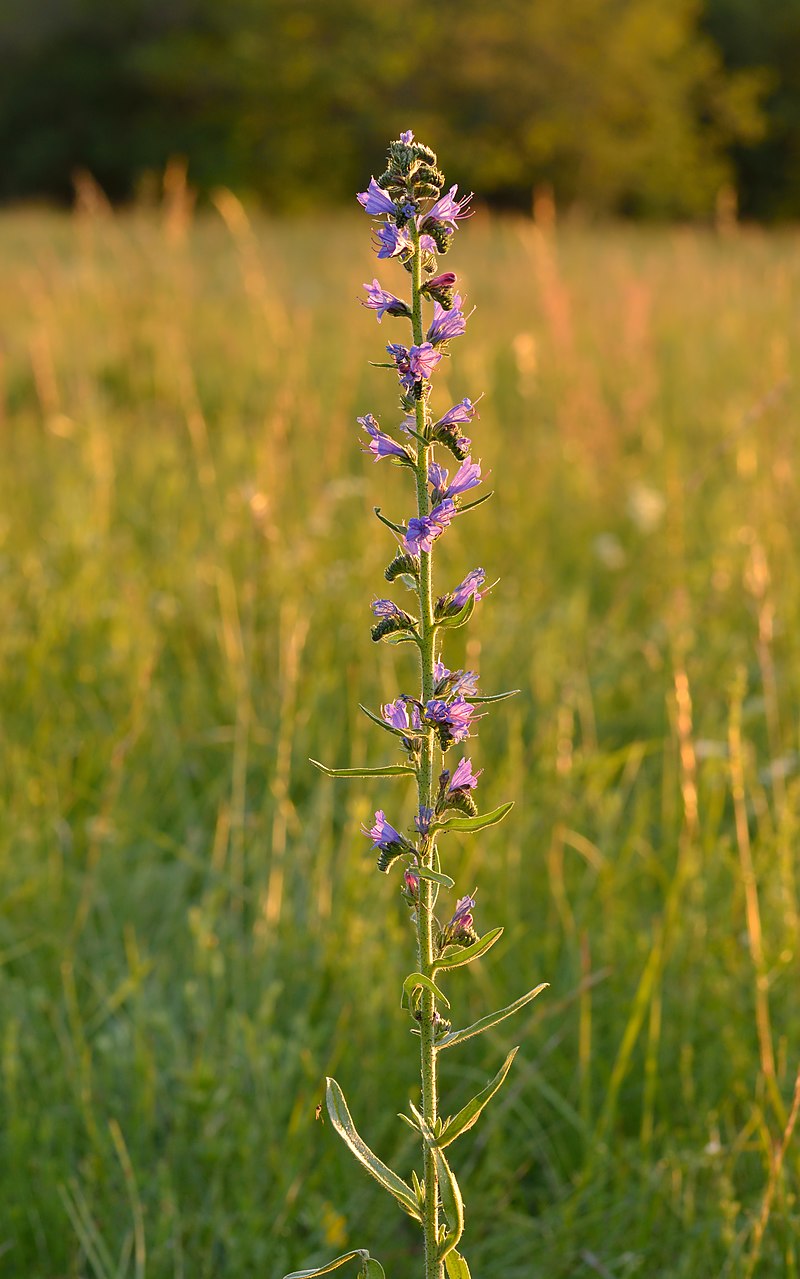 In days gone by  it was said to be an excellent remedy to poisons and venoms and to cure the bite of a viper, hence the common name. One writer in those times states  " It hath its stalks all to be speckled like a snake or viper, and it is a most singular remedy against poyson and the sting of scorpions."

A decoction of the seeds, it was said, made in wine,  comforts the heart and relieves melancholy.

The seeds are thought to resemble a snakes head thus specifying it as a cure against the bites of serpents. hence the generic name of Echium from echis -a viper.

In much later herbals it was said to be a good diuretic, demulcent and pectoral. It was also claimed that the leaves, especially those growing nearest to the root, made a good cordial or infusion, which was said to work  by causing sweating  to alleviate fevers, headaches, and nervous complaints.

A  red dye was also produced from the roots.

When chopped up finely the fresh flowering heads may be applied as a poultice to whitlows and boils. This plant must be used with caution if taken internally due to unconfirmed reports of toxicity.

The above information is for historical interest only and not meant as a guide to self medication.