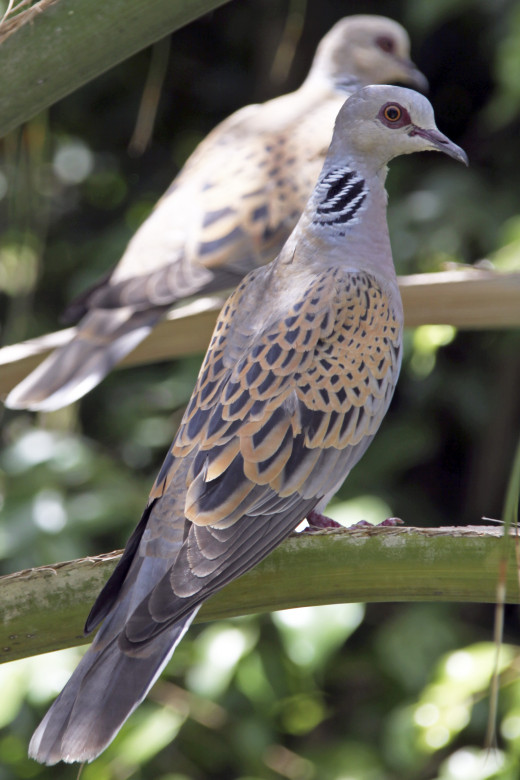 The Turtle Dove belongs to the family Columbidae {Pigeons and doves} and is given the generic name of Streptopelia which derives from streptos indicating a collar +peleia a dove, the specific name of turtur derives from the Latin turtur meaning a dove.

In the UK this is sadly one of the fastest declining species. Its numbers have crashed by 85% since 1995, according to the State of the UK's Birds Report. The sightings in the summer of 2013 were the lowest ever recorded. They have declined by 91% since the 1970's. Thus they are placed on the Red List of Conservation concern in the UK, where they are classed as a migrant breeder and passage visitor. It is estimated that there are 14,000 territories during the summer months . { This is now thought to be an over estimate}. In Ireland it is classed as a rare passage migrant in spring and autumn, mainly to the headlands on the south coast. Although it has bred in Ireland it does not do so on a regular basis.

It is the only migratory dove in Europe and winters in West Africa where they gather in roosts of up to one million birds {source BTO}.

Here we look at the lifestyle and breeding habits of this species. There are historical observations from past ornithologists and other eminent writers of days gone by. As always we start with a description of the subject under review. 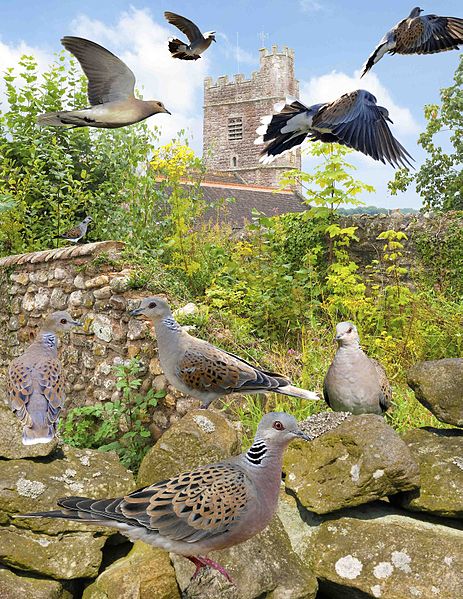 The bill of the turtle dove is of a dark greyish-black colour, much flattened in the center and reddish on the inside. The iris is a bright yellowish red and the bare skin around a light red. The sides of the head are yellowish changing to pink on the neck and breast. The back of the neck and crown a light greyish blue. On the sides of the neck there is a roundish patch of black, each feather being tipped with white surrounded by a bluish tinge. In front there is a delicate light purplish red, fading into grey. The chin is pale brown The back is greyish brown above and brownish on the lower part.

The tail is long and much rounded, greyish brown with markings of black in the center of the feathers. The under-wing tail coverts are white. The legs and toes are reddish and the claws blackish brown.

The female is of a rather lighter appearance than her mate, and as a rule slightly smaller, but they are difficult to distinguish. The young birds are at first covered with a soft yellowish down, and the full plumage is only gradually obtained and not completely until the second year. In relation to their body size the wings are medium length, the neck is medium short, the bill medium short and the legs are short. They are 27 cm { ten and three quarter inches } in length and the adult birds weigh 140 grams.

They have a rapid clipped flight , the wings being brought in and out again with quick jerks. The display flight has many flaps and fewer glides than that of the wood pigeon

Illustration of the Turtle dove

From Familiar Wild Birds Public domain courtesy of the BHL. 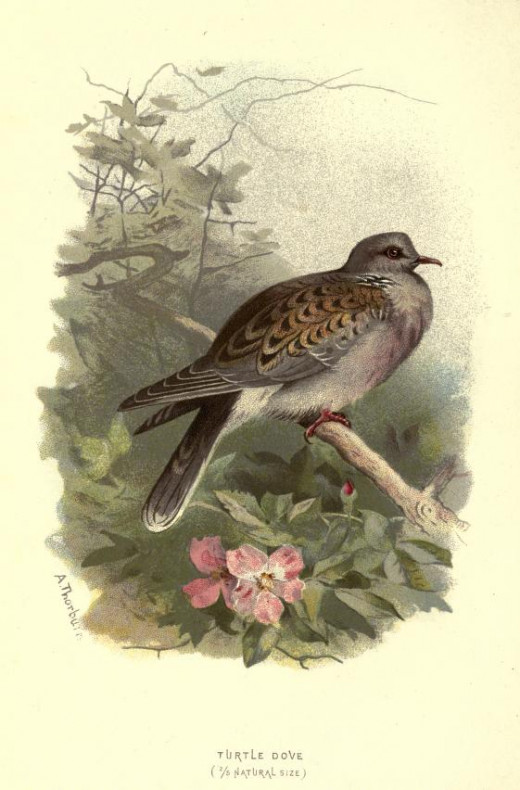 The turtle dove can not be separated from pleasing and sentiment in the UK and most other countries of the world. Its strong bond and attachment to its mate, and its gentle confiding disposition and elegant appearance have for centuries been the admiration of man kind.

These admiral characteristics have inspired poets, artists and moralist's alike. That said it is a reference to them in their wild state, for when kept in aviary, as they once were, they become very quarrelsome with each other and the weaker bird is subjected to some merciless treatment from the dominant one. Butler { 1896 }writes " The turtle dove is often kept in confinement, and readily hybridizes with the other species of the genus, and in a very large aviary, where it has the power of flight, can be readily induced to breed with the white collared dove Turtur risoria, which is also frequently kept in confinement."

Indeed, in days gone by the bird was generally kept in such locations than any other member of the family to which it belongs, and, it was not so familiar in the wider countryside as one would have imagined.

Turtle doves arrive in the UK about the beginning of May from their winter quarters in West Africa. As previously mentioned it is the only migratory dove in Europe. The males usually arrive before the females. Soon after their arrival the woods and groves are filled with their soft notes, which is described as a rich low 'coor-r-r coor-r-r,' prolonged for some time and often modulated in different ways.

In cultivated districts it tends to be shy and wary and at the least alarm will take to the safety of the dense foliage on trees or hedgerows. When perched after such an alarm it is ever looking anxiously around from side to side , as if fearful of an enemies approach. Like most pigeons this near relative tends to drink frequently and regularly. It was said by some to drink only fresh water, however, Stevenson in his book ' Birds of Norfolk' notices its partiality for salt, and states " I think this is the reason why it occurs so abundantly near the coast".

Dixon when in Algeria made the following observations " Almost every date -palm contained one or two of these beautiful birds, and they seemed very fond of hiding themselves in the thick foliage, rarely perching on the outside of the tree. They were not at all shy, and seldom left their retreat before the retort of a gun drove them off. Numbers of these birds visited the almost dried up river bed to drink, usually in the early morning. They roosted in date palm trees, and many birds sat close together in pairs, as if they had already mated."

Turtle doves have always been associated with love and tenderness. 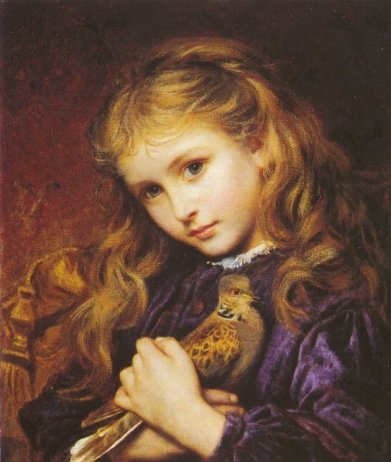 History of a name

The nomenclature of this species has changed many times over the years. For many years the turtle dove enjoyed the unchanged name of Turtur auritus. Dresser in his 'Birds of Europe', however, adopted the name of Turtur vulgaris, ignoring the prior name of Brehm's, and placed a query in front of it in order {according to Seebohm} to satisfy his conscience and justify his adoption of the later name.

Saunders in his continuation of Newton's 'Yarrell' rakes up another name that of Turtur communis. According to the rules of the British Association , the name of the Turtle dove was Turtur tenera. However, Seebohm {1883} refers to the bird with its original name of auritus. the current name of Streptopelia turtur is a relevatively late name change.

Courtesy of the BHL. Public domain 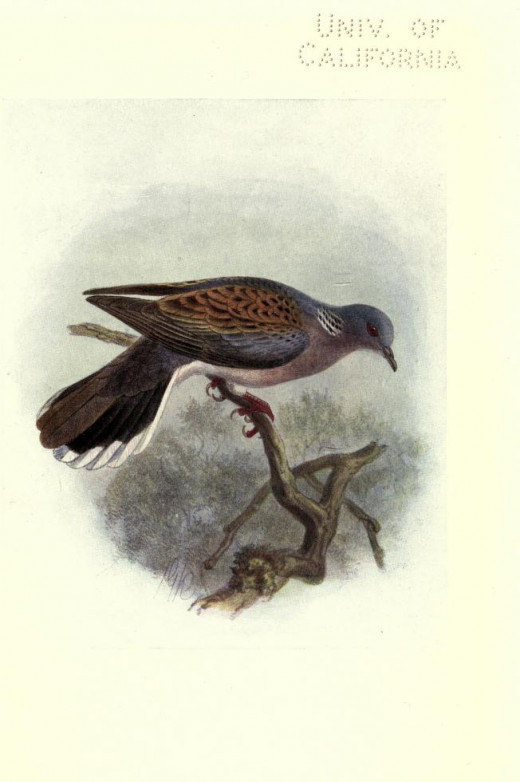 Diet of the turtle dove

The diet of this species consists of various sorts of seeds especially those of cereal weeds. They frequent open woodland and scrub and nay also be seen in gardens. Swaysland in his book 'Familiar Wild Birds' 1883, states " They invariably feed on the ground, and are constant visitors to large open tracts of freshly sown land. Cornfields that border upon small or large streams are very favourite haunts, the birds being fond of drinking and bathing. "

They usually feed and go about in small flocks varying in numbers from half a dozen up to twenty or more, and at the close of the days foraging they return to roost among the higher branches of trees. The flight is easy buoyant and rapid.

The birds seek out a nest site within a few days of arriving. They usually choose willow and hawthorn as a location and they very careful to conceal the nest, It breeds in locations that afford it plenty of cover. This may be in dense game cover or plantations , but they are also in favour of more open districts if the hedges are tall and thick.

The eggs are pure white and have a very shiny polished appearance. They never exceed two in number and are of an oval shape, slightly pointed. At times the eggs may be seen through the bottom of the nest, so loosely is the structure put together. The eggs are incubated for 15-16 days by both parents. The young stay in the nest for a further 18-19 days, being at first fed on crop milk before being introduced to more solid food as they develop. The birds will, if conditions are favourable, rear two or even three broods per season.

In the early autumn , just previous to their departure the turtle dove often congregates either in large or small parties which haunts the stubble fields and 'seed fields' ,where they subsists on the scattered grain and probably the tender shoots of clover. They set off for warmer climes during September, only stragglers will be encountered after this time.

Egg of the Turtle dove. 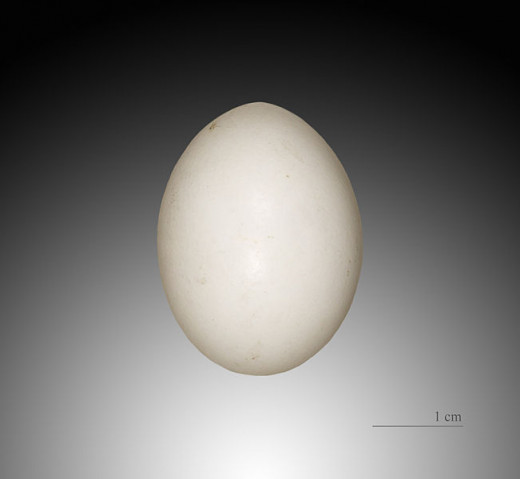 UK- red listed due to declines of over 50%  in population/distribution numbers over the last forty years or so.

Europe-in Europe it is classed as being Vulnerable.

The images on this page may be reused. However, the name of the relevant author must be attributed  along with any accompanying license.