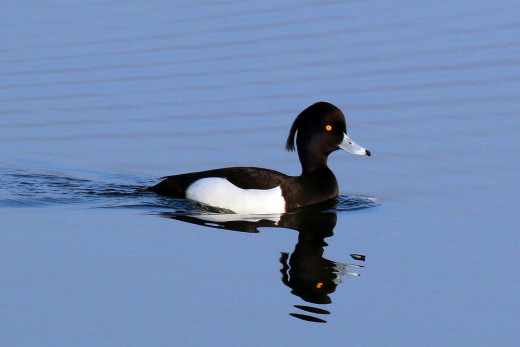 The Tufted Duck belongs to the order of birds known as the Anseriformes and the family Anatidae within that order. The genus name of Aytha derives from Greek aithuia -a seas bird described by Aristotle. The specific name of fuligula derives from Latin fuligo meaning soot + gula =throat.

here in the UK they are placed on the Amber list of conservation concern [ Declines in population/distribution of between 25-50% over the last forty years or so}, with an estimated 17,000 pairs in summer. In Ireland they are also Amber listed due to its localized breeding range.{ Source BTO}

The birds breed in Europe and north and central Asia , they winter south to north Africa and southeast Asia.

Redhead-male one of the ducks that represent the genus in America. 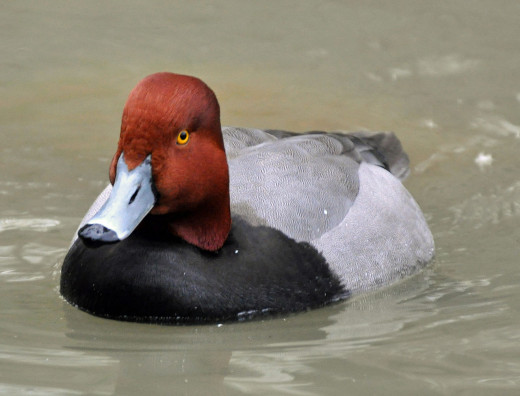 What are ducks of the genus Aytha

The genus Aytha comprises diving ducks and is made up of twelve species. They include the North American ducks such as the Canvasback Athya valisineria and the Ring Necked Duck A. collaris.

They are referred to as diving ducks as opposed to the dabbling or surface feeding ducks such as the mallard. Most of the members are native to the northern hemisphere, they are so named because they generally by diving[ The exception being those of the genus Netta,which seem to be reluctant to dive.

They are uncomfortable on land their feet being placed further back on their bodies than those of dabbling ducks, which enable them to propel the birds when under water.

Here we review the Tufted duck Aytha fuligula and as always we commence with description of the subject under review. 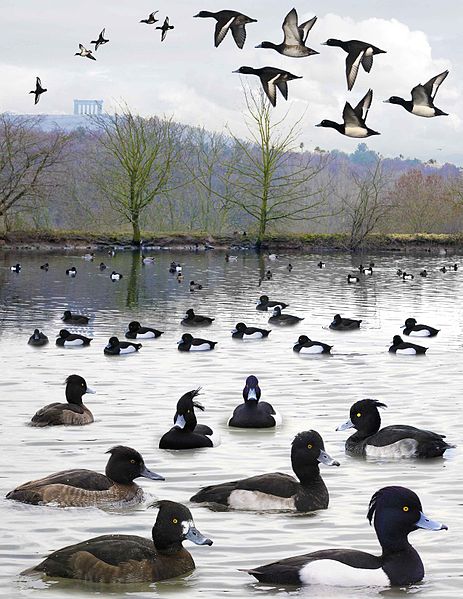 The Tufted duck is a very plump and compact bird,much resembling the Scaup in colour. The head crest,and upper neck in the male, black,shot with purple and green reflections. The upper parts brownish black,spotted all over with minute whitish spots. The breast and flanks are white.

The female is dark brown above,greyish brown underneath,where the males are white. The tail which consists of fourteen feathers is short and somewhat wedge-shaped and is black. The upper tail coverts black, under tail coverts are also black

Male above female below. 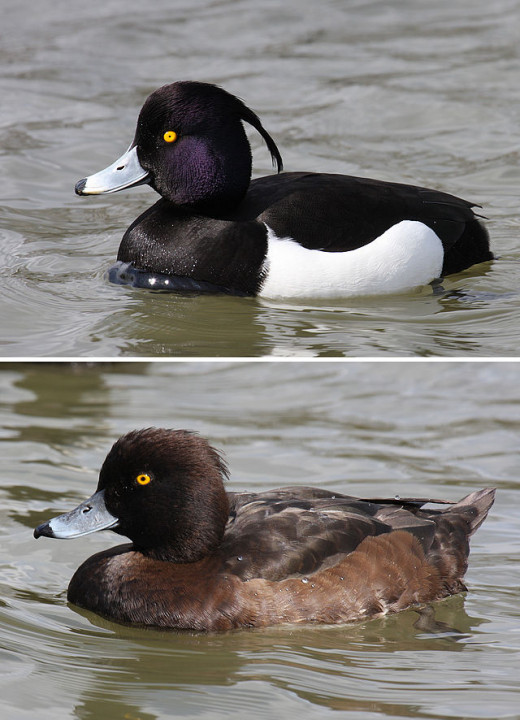 Male above female below.

In the UK it breeds across lowland areas of England ,Scotland and Ireland, but less commonly in Wales, with most birds being resident. Numbers are swollen in winter by an influx of birds arriving from countries such as Iceland and those of northern Europe. The total winter population including these migrants is estimated at around 120,000 individuals.

It is thought that the rapid expansion of the Tufted duck in Britain during the 19th and early 20 th centuries was probably due to the colonisation of Zebra Mussels.{ brought into London Docks in the 1820's}.

Earlier than that, there are records of the species nesting in Scotland at Loch Leven in particular,during the early 1800's and in England in Nottinghamshire since 1849 and in Ireland since 1875. Its gradual expansion as a breeder over the country was considered as being remarkable and more so since then when it received protection under the'Wild Birds Protection Acts}. They are today protected under the Wildlife and Countryside Act of 1981 {as amended}, but it is still legal to shoot them between September the first and the thirty first of January during the wild-fowling season. It was also introduced into private and to artificial waters during the 1800's.

During that period there were no records of it occurring in Iceland {unlike today} and it was not included in the catalogue of the Birds of Greenland. It was recorded as nesting in Faero in 1872,and was fairly common in Norway,Sweden,Finland and Russia.

In 1886, Butler,made the following notes. " I had the pleasure in company with Mr.Whitaker, of Rainworth Lodge, of visiting one of the chief nesting quarters,at that time of the Tufted duck in England. On his own and adjoining properties in Nottinghamshire. Since I have had many opportunities,in various places,of studying the habits of this bird, but none which have kept such pleasant and abiding memories. Also I was in company with one who had the fullest knowledge of the bird and its habits"

Mr.Whitaker made the following remarks in his book 'Descriptive List of the Birds of Nottinghamshire'--" This duck is very partial to Rainworth Water,where it has nested for 35 years. It pairs in March, but goes to nest late at the end of May or early June. After pairing the male and female are inseparable,swimming together. The female on being alarmed takes to the wing first and calls an alarm note. She also calls the note when she is about to alight. The flight is very close to the water, but when they rise in the air they are very strong fliers with a loud rushing noise of the wings."

" It is a very tame bird.In the evening they leave the ponds at flight time and return in the morning,resting and diving for weeds during the day and become restless as the hour for leaving approaches "

Tufted ducks are excellent divers and when diving for weeds may remain submerged for 15 seconds, but they are capable of remaining submerged for much longer than that. The food consists of the shoots of various aquatic plants,supplemented by fresh water insects and small pond snails.

When at rest the male is very conspicuous,and seems to float very light on the water,his white breast feathers fluffed up over his wings,so as to almost hide them. When is head is erect , the black crest is easily seen it gives the bird a somewhat lovable appearance.

The flesh of the Tufted duck was once considered fairly palatable but in this and many other cases,much seemed to depend on the nature of their food,and proper dressing and cooking. Lord Lilford thought the flesh to be,when living on freshwater,far superior to that of the Pochard**

' British Game Birds and Wildfowl ' ,1855, states-" Of its edible qualities we have various accounts,some pronouncing them to be very excellent,others considering them as but indifferent eating. From our own personal experiences we pronounce them excellent. A note on the subject written several years since,states that it was a tender and delicate meat. It is probable that much depends on the previous feeding of the bird, those that chiefly fed on shellfish would be but poor eating,while those feeding for some time inland,would probably be as we have found , the bird above referred to which was shot about six miles from the city of York."

The nest is made from rushes and grass,and is placed close to the water. The nest is generally well concealed and is often,merely a slight hollow.The female deposits 8-11 eggs which are an olive brown colour which resembles the colouring of those of the Pochard. When the full compliment has been laid they are buried in down of a blackish colour and often mixed with white feathers , which may come from the breast of the male bird.

The eggs are incubated by the female for around 25 days. When the young hatch they are cared for by the female only, the selfish male retiring with his fellows to assume the 'eclipse' plumage,which is of a dull chocolate colour. The young in down are cute. They are capable of swimming and feeding soon after they are hatched. When there is any danger apparent the female does not lead them to be concealed in the rushes,as most ducks do, but rather takes them to the middle of the pond.

The ducklings are easy to recognize they appear like chocolate brown bundles of fluff. They feed on larvae and flies which emerge from the muddy bottom of the pond. Once the young ducklings have fledged first true feathers, which occur approximately in 50 days,they have become independent. 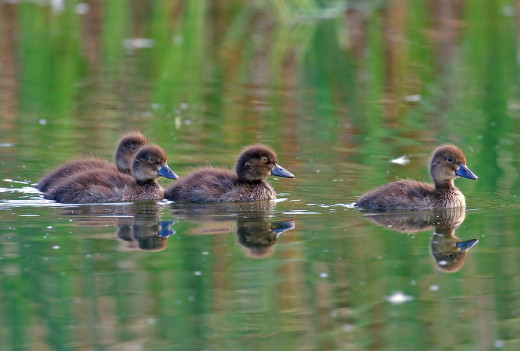