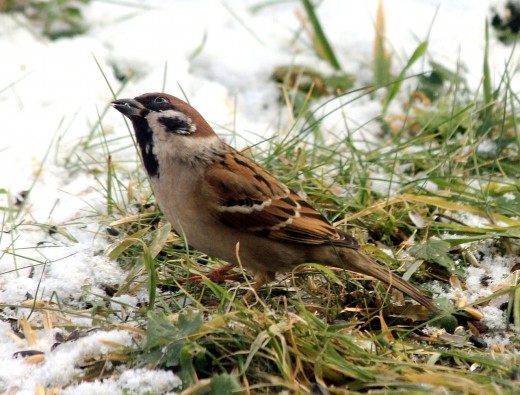 The Eurasian Tree sparrow belongs to the Passeriformes order of birds {perching birds} and the family Passeridae {formerly Fringillidae} within that order. They have been allocated the genus name of Passer, Latin for sparrow and the specific name of montanus -of the mountains.

In the UK they are placed on the Red list of conservation concern due to dramatic declines in breeding populations and distribution. The UK population has suffered a severe decline estimated at 93% between 1970 and 2008. However, recent Breeding Bird Survey data is more encouraging suggesting that numbers may have started to rise,albeit from a very low point. In the north west of England there is an ongoing project named Operation Tree Sparrow, where the Royal Society for the Protection of Birds {RSPB} are working in conjunction with farmers on the birds behalf.

The current estimation of the UK population is 180,000 territories summer {2009}. They are classed as resident breeders and passage visitors. In Ireland they are Amber listed {declines of between 25-50%} due to moderate declines in the European breeding populations { the Irish population is considered to be stable}. { Source BTO}.

The Gaelic name for the bird is Gealbhonn-nan-craobh the Welsh,Golfan y Mynydd and the Irish Gealbhan Crainn.

Here we review the species its lifestyle and Breeding habits along with notes and observations from past ornithologists and other eminent writers. As always we will commence with a description of the species under review.

In America it is represented by the species Spizella arboreal 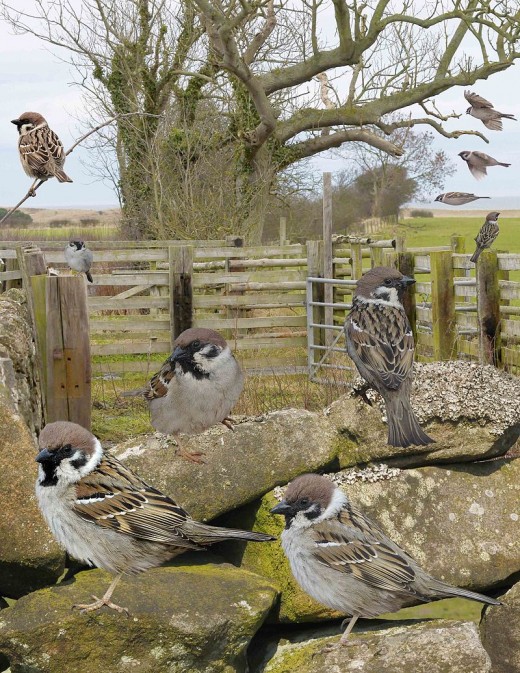 The Tree sparrow differs from the house sparrow in its slightly inferior size,chestnut brown crown and nape,a white -bordered triangular black patch on the ear coverts,a second white bar across the wing, and in the fact that the female scarcely differs from the male in appearance.They also have white cheeks and collar with a contrasting cheek spot. The iris is dark brown,a black streak runs through the eye the beak. The breast is greyish-white tinged with brown on the sides. The back is chestnut streaked with black.

The tail tends to be permanently cocked. The tail feathers nearly all of an equal length, they are of a greyish brown colour edged with a yellowish grey. The legs are a pale yellowish brown as are the toes and claws. The female ,unlike the female of the house sparrow is like the male in general appearance with the exception of a little extra brightness in the spring. The plumage of this species the same throughout the year. In England it is often referred to as the country cousin of the house sparrow.

Records reveal that the Tree sparrow was not discovered in Ireland until 1852. Butler 1898,relates that in Great Britain the distribution is imperfectly known due to its general appearance to the {male} house sparrow, Passer domesticus, and its comparative rarity, but it is believed to be most abundant in the eastern and Midland counties of England, and in the eastern counties of Scotland. He goes on to add it is believed that in the autumn the numbers of our resident Tree sparrows are largely added to, by  flocks of immigrants from the north; many hundreds arriving on our east coast often in company with Greenfinch's** during October and November

According to Seebohm, 1895, during the summer months the species differs in our islands somewhat in its habits from those on the Continent, seeming  to avoid villages and towns chiefly haunting the fields and wider districts away from houses. " On the Continent the bird has so far overcome its shyness and adapted itself to circumstances as to frequent towns, and is quite as pert and impudent as its congener, with which it otherwise resembles in habit"

The Tree sparrow is more active and sprightly bird than its commoner cousin and although it can hardly be said to have a song its chirruping is somewhat more melodious, its  cheep sharper than that of the house sparrow.

The pot tells us that there are people in the world to whom " a primrose on a river's brim" is a primrose and " nothing more", and it is equally certain that there are numbers of unobservant people to whom a 'sparrow' is just a 'sparrow',and nothing more, and who are not really aware of the differences in plumage,character and habits that distinguish the Tree sparrow from the more familiar house sparrow.

The Tree sparrows movements on the ground resemble those of the house sparrow,being quite active and lively,and when it settles it has a noticeable habit of moving the tail in a similar manner to those of the Wagtail**. Although the flight appears heavy and somewhat laboured it is nevertheless rapid. In colder portions of the year they tend to congregate in small flocks and usually keeping close together,and hop quickly about on the ground searching for food.

The male house sparrow is somewhat similar in appearance to the tree sparrow but note the grey head of this species to the chest nut brown head of the latter. Image Dal. 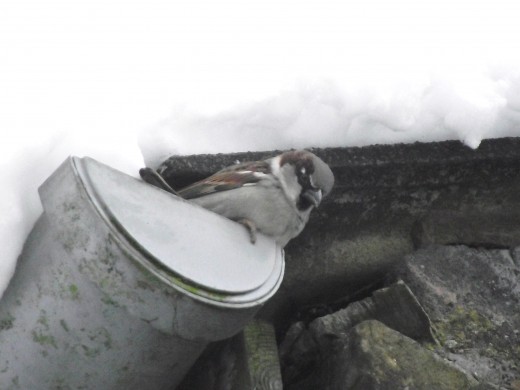 Before the law was changed that now protect all wild birds {with a few exceptions} it was quite legal to capture wild birds, by whatever means, to sell as aviary and cage birds and for food. Bird-catchers made a good living out of it. Thankfully those days are now confined to the past, however, it was part of our avian history, and as such is mentioned in the next few paragraphs.

Butler 1898, made these notes on the subject--" On several occasions Bird-catchers have offered me Tree sparrows at from two-pence to three pence apiece; but  the birds looked so vindictive and chirped so savagely that, considering  their powerful beaks, I decided not to risk associating them with other members of my feathered family .Although opinions differ greatly respecting the character of the species, I am satisfied that I adopted the safest course"

Stevenson ,'Birds of Norfolk, Vol 1 page 209} remarks " In confinement the Tree sparrows are certainly the shyest and most untameable of any birds I have ever introduced into my aviary, and   there seems to work but little change in their wild nature, as on approach of any person, whether a stranger or not, they  dash about the cage in a reckless manner ,and when exhausted and panting with fright, will creep into a dark corner to escape notice"

Swaysland, who  seems to have had considerable experience in keeping many of our British birds makes this observation " When caught do not place them immediately into the aviary ,as then they would invariably sulk and behave wildly frightening other birds ,but rather keep them in a small cage until they become tame" Saunders remarks that in captivity the Tree sparrow has bred with the House sparrow" but this seems unlikely.

One aviary owner warns I have been told by Aviculturist's who have kept the Tree sparrow, that it is not tyrannical in an aviary. However, it must be borne in mind, that an individual does not necessarily exhibit the characteristics of a species; even half a dozen specimens may have a peaceful disposition. On the other hand one vicious Tree sparrow, associated  with birds weaker than itself, might  do much mischief in a very short space of time; its powerful beak would enable it to kill or maim any smaller or weaker bird without the least trouble.

Tree sparrow in a garden 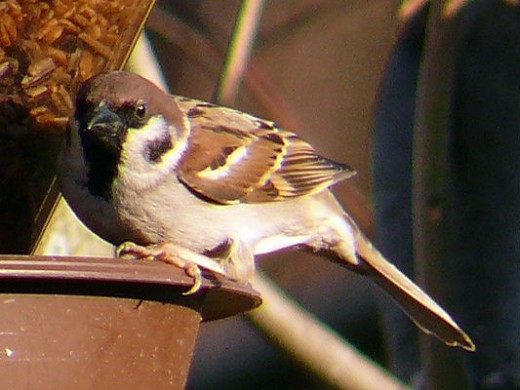 The location for the nest site seems to be in holes in Pollard willows when obtainable, and, more often than not , the selected hole is at the top of a stump. However , they will use other sorts of trees. Lord Lilford, remarks that " In Northhamtonshire  {southern England} they are to be found nesting in small colonies of three to four pairs, in old hollow trees especially decayed ash, willows  and walnuts" In other countries the bird will nest in similar situations to the House sparrow under tiles and gutterings  etc. In the 'Zoologist' for 1887 page 265, there was a report of a nest with six perfectly typical eggs {on May 24th} in an exposed mole burrow, in  a brick-earth cutting at Kemsley, near Sheppy.  { Southern England}.

Tree sparrows breed from May until August, the nests being encountered more frequently in the latter half of May.

Nest of the tree sparrow. 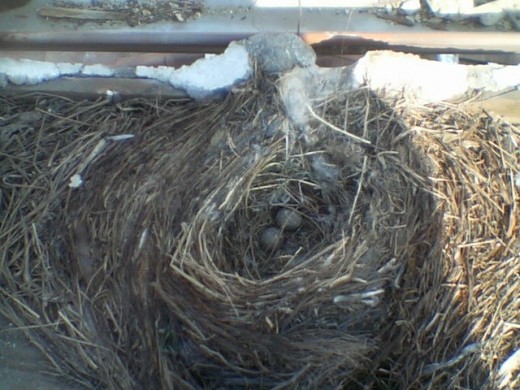 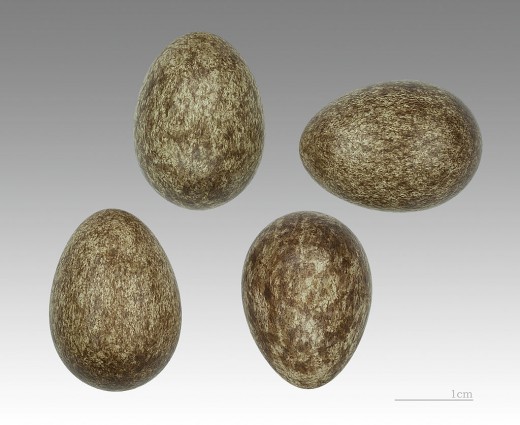 The nest itself is a slovenly affair, usually bag shaped, consisting of a mere thick lining to the hole in which it is situated. The top is widely open ,so that the light generally falls directly upon the eggs. The materials used are similar to those chosen by the house sparrow ,straw ,hay and a mass of poultry  feathers and even man made materials employed such as paper and string.

The eggs which number four to six are rather similar to those of the house sparrow and vary nearly as much. Specimens have been recorded which are greenish-white with a sparse grey speckling. Greenish -white speckled with grey and greyish white thickly mottled or blotched with grey most densely at the large end. However, the more typical type have a whitish background almost concealed by brown markings ,the amount and distribution of these markings vary also. Some are that thickly covered that the eggs look to be brown.

The eggs are incubated for about 13 days, by both parents. the young that hatch into the world are fed on a rich diet of caterpillars, spiders and various kinds in insects and their larvae. When adult the main source of their nutrition comes by way of seeds.

The parents look after their young with great care and if their nest is approached will hop restlessly from branch to branch uttering their shrill chirping alarm note.

The young birds have the black markings replaced by brown and the win bands suffused with a buff. 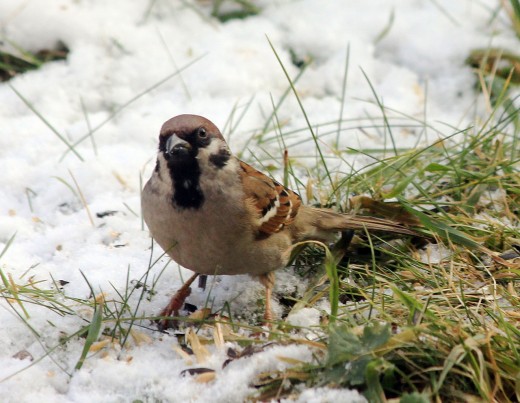 UK-Red priority species due to declines of over 50% in population/distribution over the last forty years or so.