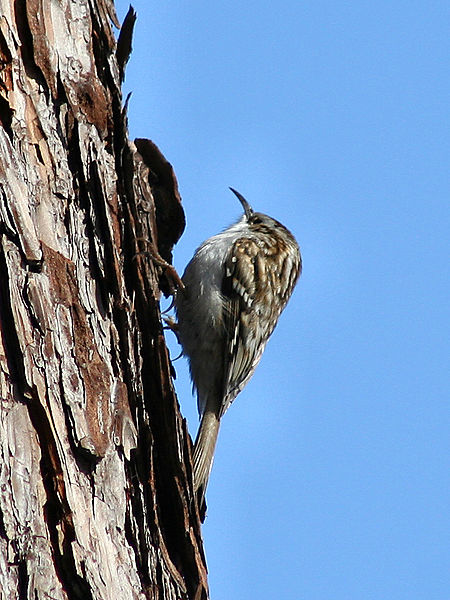 The Tree creeper, as its scientific name suggests is a familiar bird throughout the UK, although being inconspicuous and shy by nature, very difficult to spot. In my experience one usually comes across them by chance rather than going in search of them.

It runs up the tree in the manner of a little Woodpecker, but unlike the bill of the Woodpecker the weak slightly curved bill of the Tree creeper is not designed for hammering the wood. Its genus name Certhia derives from the Greek kerthios, a small tree dwelling bird described by Aristotle. It belongs to the Passerifomes {perching birds} and the Sub-order Passeri and placed in the family,Certhiidae.

In North America it is replaced by the only member of the genus that occurs there Cethia americana. here they tend to inhabit coniferous woodland, but not exclusively so. In the UK it is listed on the Green list of conservation concern {no current problems} and there is an estimated 180,000 birds in the summer months. It is classed as a breeding resident . In Europe it is not a bird of conservation concern with an estimated population between 3.7 and 7 million pairs {summer}. The Gaelic name for the bird is Snagair the Welsh Dringwr bach and the Irish Snay. In Ireland it is numerous in the extensive broad leaved forests of Killarney Nation Park or the Portumna Forest Park.

Here we review the species, its lifestyle, and breeding habits along with observations from past ornithologists. As always we start with a description of the subject under review. 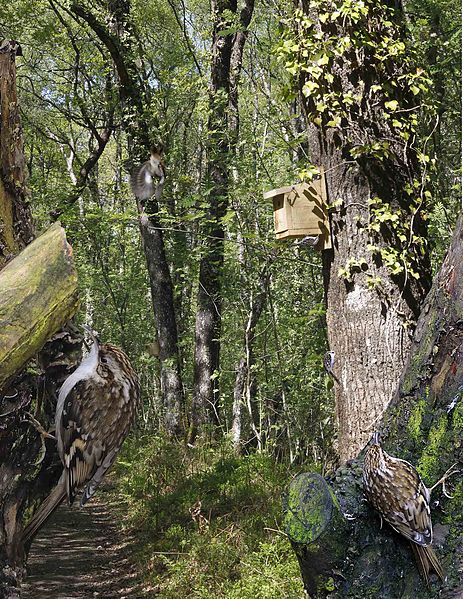 The adult birds have a general brown colour on the upper parts ringed sparcly with a golden buff colour. The head and and back streaked with ash grey centers to the feathers. The rump and upper tail coverts orange tawny the feathers are long and fluffy and having a silky white mark just before the tips. The lores are dusky as are the feathers below the eye, and along the upper edge of the ear coverts. Above the eye a streak of silky white, the under-parts of the body are snowy white.

The tail feathers are stiff and pointed are brown with reddish brown shafts. The bill is dark brown and slightly curved, the lower mandible paler. the legs and feet are brown.

In relation to its body size the tail is medium long. The wings medium short,the neck short, the bill short to medium length and the legs medium long. the length of the bird is 12 cm with a wing span of 19 cm. Both sexes weigh 10 grams.

The flight of the bird is weak and undulating {bounding} and rarely sustained, apart from a curious bat-like display which is rarely observed. Creeps up trees and along branches.

The fissured bark of the common ash affords many hiding places for insects  Tree creepers are fond of Ash. 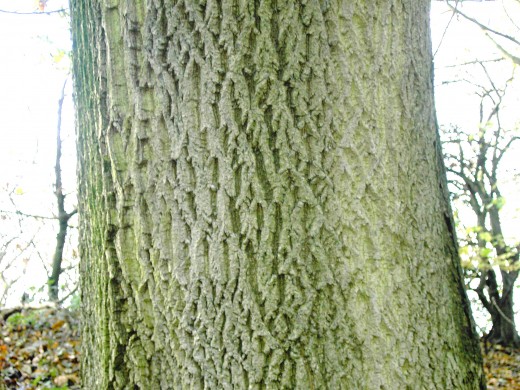 It ascends trees in the manner of a Woodpecker but its weak bill can not 'hammer' at the bark in the manner that the latter does, or even tear off pieces of bark as the Nuthatch does. Its food consists of tiny spiders, insects and their larvae. Whist questing for these morsels the Tree Creeper will fly to the base of a trunk and work its way up the trunk in a mouse like manner, or it may make a divergence along some bough, examining both the upper surface and the under surface, but always pursues its quest until reaching the end of the branch.

Unlike the Nuthatch it is never seen to come down a tree trunk head first, it always moves from the base to the top of the tree or along a lateral branch or bough.

The bird in Europe is said to have a song similar to that of the blue tit . However, here in the UK, I or any one of my birding colleagues have never heard a tree creeper sing.

Trees with rough bark such as the Ash or Oak are often chosen for foraging on , for this type of bark tends to hide more insects and spiders in their crevices. if you have ever happened upon a Tree creeper during the course of your woodland rambles it will be noticed that

they rarely fly off, but invariably run up the trunk, making the observation of them very difficult.

The sharp pointed and curved claws and their quick running action along the bark make this an incredibly easy task for the bird, they allow it to walk on the underside of the branches in the manner of a fly upon the ceiling. Its progress up the tree trunk consists of a series of sudden jerks, in which it is aided by the stiff tail feathers which act to give the bird a firm hold. Its head is carried, as a general rule,in a straight line forwards and at sufficient elevation to allow the curved bill to be carried clear of the roughest bark.

The flight of the Tree creeper is similar to that of the tit family, being undulating, however it is much more rapid, its slender body and smooth feathering contributing to this fact. The bird seldom flies for any great distance, but tends to fly from tree to tree. They may be observed flying down from a tree top to the base of another tree trunk, where its ascending journey starts anew. This industrious activity continues throughout the day until evening approaches, and the bird is compelled to seek a hole in a tree, or the decayed crown of a pollard in which to roost.

It is very rare to encounter a Tree creeper sitting or standing still, unless the bird is fully fed or in the act of consuming a meal, otherwise it is continually on the move and ever alert. Its long slender beak is especially adapted for extracting food from out of the fissures and crevices of the bark. The food is swallowed immediately it is procured.

Being shy and retiring and well dressed to blend in with the bark of the trees, and its small size, make them difficult to see and this may be the reason people thought that they were much rarer than they really are.

Illustration of the Tree creeper. 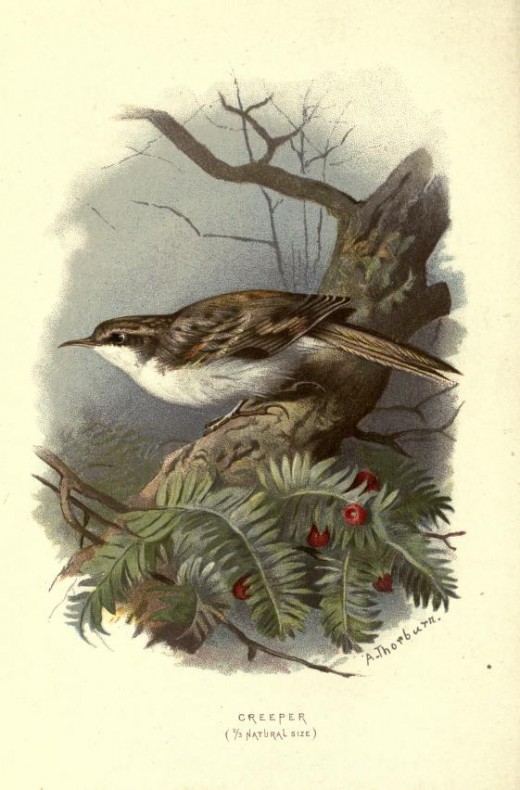 Brown Creeper {USA} the image shows how small these birds really are. 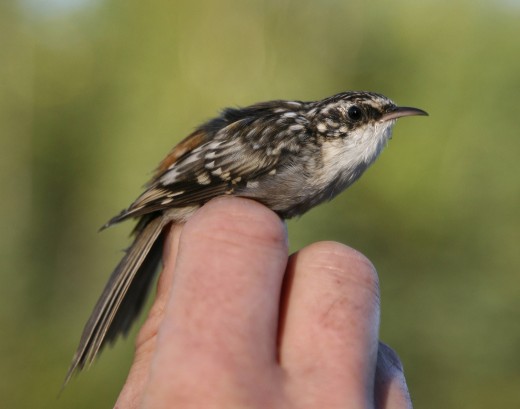 According to Dresser {1800's} Mr.Ridgway found the this creeper inhabiting both the pine forests of the Sierra Nevada, where it was the more common, and also in winter among the willows of the River valleys, he did not meet with it east of the Truckee River, nor until he had reached the Wahsatch Mountains.

Dresser himself wrote-" in Texas I found it not uncommon in the southern and western districts. I often noticed it on the Medina and San Antonio rivers. I have two specimens, which I shot in March, and Dr Heermann informed me that he has found the nest of this bird near Howard's Rancho on the Medina River.These two specimens and one from Jalapa in Mexico, agree very closely with our European bird."

He added, the Guatemalan birds, however, differ considerably from northern examples, as well as those obtained in Mexico. This form was found in the Pine forests of the upper zone of the Vocan de Fuego by Mr. Salvin, and he also observed it frequenting pine trees in the district of Chilasco, Vera Paz, at about 6,000 feet above the sea.

" With regard to the American Creeper Certhia which was kept separate by Professor Baird, and divided into two subspecies under the names of Certhia familiaris,var americanus and variety mexicana. I can not after careful and critical examination, find any specific distinction between wither of these so called varieties and our European bird. I have specimens from Washington, North Carolina, and Jalapa in Mexico, from Mr. Salvin's collection, and from San Antonio, Texas, obtained by myself, and can match any one of them in the minutest detail of colouration by some of my European birds" 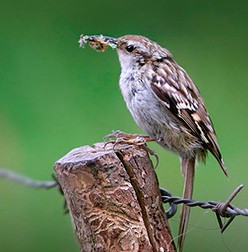 In Europe another sub species occurs the Short toed Tree creeper Certhia Brachydactyla, ir frequents woodlands from Portugal to Greece and Turkey, and in north west Africa, so named because its toes are shorter than that of the common Tree creeper. There are currently 5 sub species of this bird recognized.

The Tree creeper resort to their breeding agenda during the month of March. Willow trees of any great size is a favoured location for these birds. A narrow split in the bark is generally chosen as a location to place their nest, or a hole in a tree, and sometimes behind the beam of a shed, however, no matter which location id chosen the nests are always well concealed.

The nest is created using materials such as moss, and, small roots, with a good many chips of dead wood, it is a loose construction generally. However, according to Seebohm it is a handsome structure, and he states that " There is a rustic beauty about a creeper's nest which few others possess.

The crevice behind the bark is often to large for the nest itself, and the extra space is filled with a quantity of fine twigs, chiefly of beech and birch. The chief characteristics of the Creeper's nest is the lining of fine strips of interior bark which is always present.

The eggs which usually number 4-6 have a ground colour of either pale white or reddish white, the markings vary considerably. Where the egg is creamy or reddish white the spots are decidedly rufous with a tendency to cluster around the large end. There are eggs encountered which are whiter in ground colour and the spots vary from reddish brown to blackish with underlying spots of grey not easily distinguished from the overlying spots.

The eggs are incubated by the female for around 13 to 17 days depending on the conditions and temperature. The young are born naked , blind and helpless. Both parents are very asssidious in the care of their young but the chicks are noisy, and may well lead to the discovery of a well concealed nest, by the squeaking sound they make when the parents arrive with food.

The chicks are fed with small caterpillars and soon grow, within a further 15 days of being born they are ready to leave the nest. As soon as the young birds become independent the parents prepare a second nest and the cycle begins again for them.