One of, if not the most numerous, of our small mammals is the wood mouse which was recognized as a distinct species in 1894. It is also referred to as the long tailed wood mouse. This name is a bit misleading , for it is the field vole that dominates that particular habitat.

Description of the wood mouse

This little mouse has sandy to dark brown upper fur with grey or white undersides. There is a yellowish patch between the forelegs. Because it is for the main part a nocturnal species its eyes are large, and bulging of a black colour.It also has ears that are large and sensitive to the slightest sound.

The tops of its feet are covered with short,white hairs and each toe ,four on the forefeet and five on the hind feet are terminated by a sharp claw. The large hind feet help the mouse to leap like a kangaroo, it is able to leap great distances usually with its forefeet tucked in towards its chest. They also use the back feet to sit up and sniff the air  in the manner of a rabbit. From this sitting position it is capable of leaping over a meter high if necessary.

The body length is 8-10 cm plus the tail which is nearly as long at 7 cm. The tail is dark above and whitish below and with a sparce covering of fine short hairs. The tail is used for balance as the creature is climbing but it is not prehensile ,so can not be used to grip objects tightly as is the case with its smaller relative the harvest mouse.

The weight varies in accordance to the season and locality. On main land Britain , during the spring, the male weighs 25 g, the female less at 20 g, unless she is close to giving birth.The wood mouse is usually silent but may squeak if alarmed.

Juveniles are much greyer than the adult on the back and underside, and they lack the yellow patch between the forelegs.

Wood mice do not smell or carry the same diseases as the detested house mouse. They are rarely found in doors. Should you find yourself in the situation where you suspect a wood mouse is in the house, there are ways to trap them alive and release them outside. This information can be found on the mammal Society web site www.mammal.org.uk.  { click on links banner} 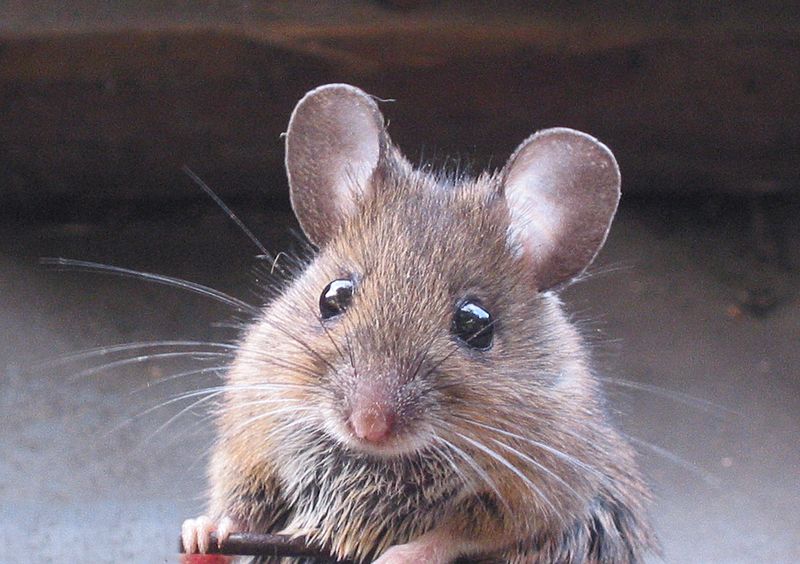 Despite its common name the wood mouse is not confined to woodland and they are just as likely to be encountered in hedgerows, gardens, farmland, sand dunes and even on mountainsides, in fact almost any where there is enough cover to hide from predators. However, they tend to avoid wet moorland and other boggy places.

Their diet is also a varied one, but they are primarily seed eaters{grassivores} relying to a great extent on the seeds of trees such as oak, ash, sycamore, lime, hawthorn and beech.Studies have revealed that these little mammals consume a high percentage of tree seeds, thus very few that are produced each season survive to germinate the following spring.

In common with many other creature the wood mouse will gather food when there is  plenty available to them and store them in food "stores" chambers in their tunnel system in which they live. Small invertebrates such as small snails and other insects may be eaten throughout the year, however, they are a much more important food source during spring and early summer when seeds are not as available to them and invertebrates and their larvae are abundant. These include moth caterpillars that fall from trees to pupate in the soil.

They will also eat fungi and fruits such as blackberries and raspberies . Hazel nuts are eaten in a characteristic way leaving more or less round holes with tooth marks on the outer shell. All the tooth marks point downwards.. Wood mice are excellent climbers and will often secret themselves into a vacated birds nest to eat their food in relative safety.

Blackberries are a favourit food source in the autumn

Wood mice live in complex tunnel systems which they are capable of digging for themselves with their forefeet or utilising natures tunnels such as those created by tree roots or even gaps in old dry stone walls, and other such localities. Within the system there are nest chambers and food " store" chambers. Sometimes they may build a nest above ground in locations such as hollow tree trunks, vacated woodpecker holes or holes in old buildings.

Wherever the nest is situated it is lined with grasses, moss or dry leaves. If the nest is placed inside an old bird box or similar situations it will carry the dry leaves up to their chosen location.

Breeding begins in early March and carries on until October, or, even later if the conditions remain clement. The female carries her young for 25-26 days. When they are born they are naked and blind and weigh 2g.The number may vary between 4-9 with 5 being the average.

They grow their first greyish brown fur at about 6 days . They open their eyes at about 16 days and they are weaned at 18 days. Survival of the young and adults is poor in the first half of the breeding season. Adult males are aggressive to each other and they wont tolerate their young after they are weaned and drive them away.

Wood mice are sought after by many predators such as owls, kestrels,foxes, weasels, stoats and domestic cats.

Domestic cats are one of the many predators of wood mice

Life span of the wood mouse.

The typical lifespan of the wood mouse is two to three months, some may even survive for up to 12 months. In captivity they have been recorded as living for two years.

This fecund activity helps to replace losses to predation and other factors, thus keeping the population stable. The breeding success of Owls in particular is reliant on the number of voles and wood mice to feed their owlets, so these small mammals are a very important link in the feed chain