The Water Vole an animal of conservation concern.

I remember as a budding nature lover, my grandfather teaching me the ways of the countryside. One of the first lessons I remember vividly was my grandfathers' passionate lesson on how to distinguish the water vole from the detested brown rat. I was taught that the harmless vegetarian water vole was being mercilessly persecuted because it had the misfortune to have superficial resemblance to the brown rat.

Close observation, he said, would reveal that although they are similar in size there are fundamental differences between the two species. The water vole has a chocolate brown, silky fur. They possess a chubby endearing face most unlike the sharp features and longer  snout of the rat. Unlike the rat's prominent ears, the ears of the water vole are characteristically small, barely emerging above the fur.

Both creatures often share the same riparian habitats. They live along the banks of canals, rivers and lakes. This fact gave rise to the water voles' country title of water rat, which is not only incorrect but helped in the creatures persecution. Both creatures swim well; however, the tendency of the water vole is to submerge after it has "plopped" into the water, while the brown rat tends to swim on the surface.

I have observed the water vole sitting upright on the bank feeding on the vegetation. It is another characteristic of the creature, the way it can hold its food and turn food around in its paws, as it is eating, in a similar manner to that of the squirrel. I have located the whereabouts of water voles by noting that the stalks of reed and tall grasses have been bitten off close to the base, as I have walked the banks, a sure sign that water voles reside nearby. 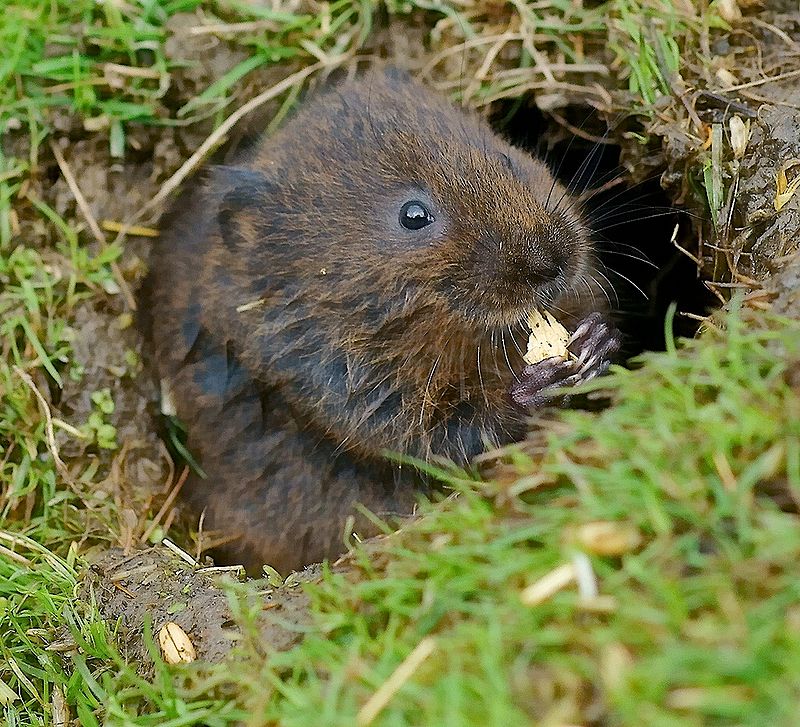 Water voles have burrows that are intricate, they often comprise a number of  chambers linked by a system of tunnels. When young voles are in residence the female may loosely  cover the entrance to the chamber with soil or grass. Breeding for this creature begins in March and endured till late autumn. Pregnancies last for around 21-23 days  and up to 8 young are born. At birth the babies are blind but they open their eyes after 3 days or so. By the time they are ready to explore their riparian world they have attained half the size of their parents. It is possible that one pair of water voles may have up to five litters per season.

It is therefore a little surprising  that a creature which may produce up to 30 or more babies per season should now be classed as endangered. In fact it is one of the most endangered mammals in the U.K. So what reasons lie behind the creatures unwanted status? Predators such as the pike, birds of prey, stoats and weasels take their toll, but this is a natural state of affairs. However, one modern day predator the alien American mink has devastated water vole populations in some areas. The irony of this fact is that American Mink were "liberated" from fur farms by so called animal lovers who released them from their cages into the wild to savage defenseless creatures such as the water vole. {see the link THE AMERICAN MINK}

Of course there are many complex factors that have played their part in the creatures demise. These include habitat degradation and loss. Also if the banks of rivers, canals and lakes become neglected they become over grown with bramble and dense shrubbery which replaces the reeds and tall grasses that form the staple diet of the water vole. Pollution has also played a part through poisoning by rodenticides and through run off from farm land and sewerage works.

Until 1998 the water vole received  no protection at all. In early 1998 their declining numbers prompted a revision of the Wildlife and Countryside Act 1981 {as amended} which added some protection to its status. It was still legal at this point to kill or trap water voles, but their burrows were given some protection and the animal was not to be disturbed in their homes. This was included in order to make any water  engineering work take in to account these burrows when using heavy machinery, and all due care and attention must, by law, be taken to avoid damaging them.

On the 6th of April 2008 the water voles protection was once again increased to make it an offense to intentionally damage, destroy or obstruct access to any structure or place used for that purpose. It also made it illegal to sell water voles or offer or expose the sale or transport for sale.

In the U.K. endangered species are placed on a red list of conservation concern and as such become Priority Species under the U.K. Biodiversity Action Plan. priority Species are subject to a Species Action Plan that is implemented on behalf of the subject, and hopefully halt and eventually reverse the decline in population/distribution of that species.

As my grandfather educated me about the plight of the water vole, so the conservation groups educate a much wider audience enhanced by intense media coverage. I hope that the water vole is safer in the future and that the protection and plans that are being implemented on its behalf are successful. or our grandchildren may be deprived of seeing this endearing creature in the countryside and water systems of the U.K.

below the water vole

The Cumbrian water Vole project, is a joint project with the Cumbrian Wildlife Trust and the Eden Rivers Trust which started a captive breeding programme where 25 pairs of water voles have bred some 100 young in purpose built pens. The aims of this programme are to extend the dwindling wild population of water voles through introducing the captive bred creatures back into the wild in places of suitable habitat. This can only be of benefit to the species has a whole. Some critics say this is just farming animals. However, it was man that depleted the populations therefore it is right that man helps to get them re-established in areas where they once thrived.

Boost for water voles in the north west of England.---During an intensive study scheduled to last three years {Cheshire Wildlife Trust }  2011-2014,  In one area-Lunt Meadows on the Sefton Coast, 30 water voles were recorded on a single 100 metres of drainage ditch compared to the UK average six water voles per hundred metres of water way. Cheshire Wildlife Trust now hopes the study will help to secure national recognition for the Sefton Coast hotspot and target wider work to reverse the downward trend across the region.

Covering parts of Chesshire, Lancashire, North Merseyside and Greater Manchester the study aimed to gather accurate base line data-the cornerstone of any future conservation plans for the species. The survey area of more than 300km of streams, ditches and canals-within around 2,000 sq km revealed that water voles were present in 37 per cent of study sites and were possibly present at a further 17 per cent of sites. The remaining areas showed no signs of water voles. However, indications of American Mink were found at six per cent of locations.

The data has allowed project officers to provide a significant amount of help to local landowners in the survey area, with more than 50 locations supplied with advise and recommendations to improve their water vole populations. a partnership with the British Association for Shooting and Conservation {BASC}  in Cheshire has seen 54 American Mink trapped and two mink control programmes implemented. More are in the pipe line. The project manager Andrea Powell said; " We found that the control of American mink in selected areas, the water vole populations have increased and in the case of the River Gowy, we have seen water voles in areas where they were not previously present"

Further updates will be added as they occur.

April 2014 --Serious concerns for the Water vole in the UK.

The WWT {Wetlands for life} The water vole is on the brink of extinction in the UK. " The loss of the water vole is one of the most rapid and serious declines  of any British mammal in recent times- faster even than the declines of the Black Rhino in East Africa. Based on current population declines it is possible that the water vole may become extinct in the UK by 2016. This is due to loss of wetland habitat and predation by the American mink.

Water voles have declined by a devastating 90% since the the 1970s.

If you can help please visit www.wwt.org.uk          Where you will find details on how to help.

The WWT have launched an appeal to the general public for help. money raised from the appeal will help to protect habitat and help save the water vole from the American mink.

The images on this page may be reused However, the name of the relevant author must be attributed along with any accompanying License.