Tench belong to the Order of fishes known as the Cypriniformes and the family Cyprinidae and are placed in the genus Tinca. They were formerly given the scientific name of Tinca vulgaris. 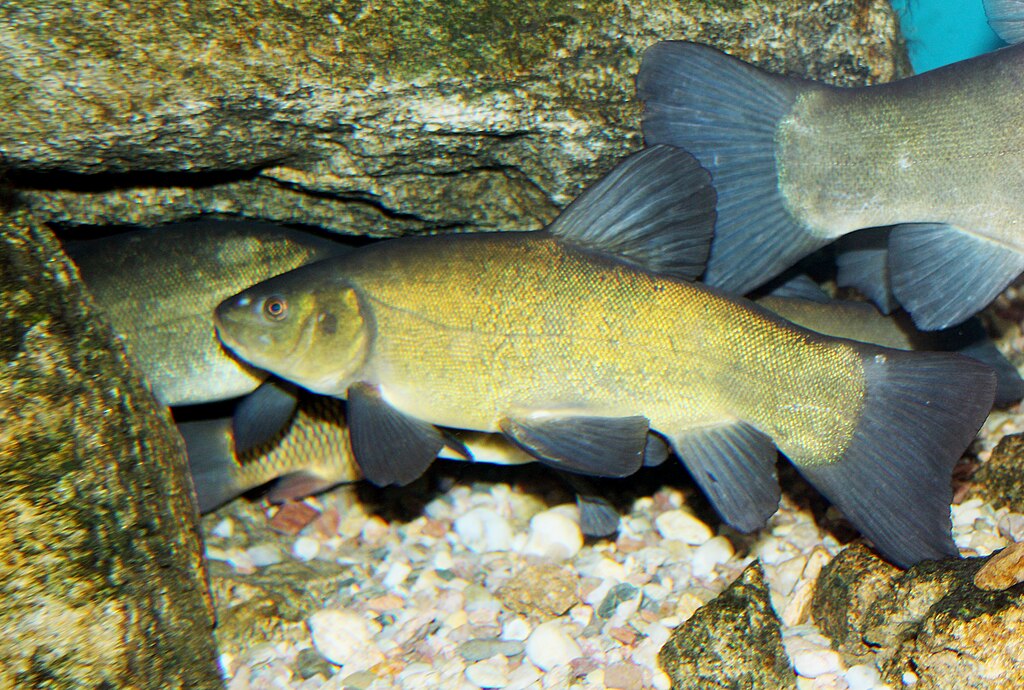 Description of the |Tench

The teeth are pharyngeal, wedge shaped, slightly hooked at the ends, in a single series, five on the left side of the throat and four or five on the other.

The Tench stands out distinct, and can be confused with no other fish. It is from a genus with this as its only species. One of the most obvious characteristics is the very small scales, deeply embedded in the dark, olive skin through which glisten like myriads of golden dots. The secretion mucus is copious and make the skin of the Tench as slippery as that of the Eel. Another characteristic of this fish is the two small barbels one at each side of the mouth.

The colouring of the tench is a rich olive green or brown, shading to a light grey on the belly. The back seems almost black, and the fins vary from brown to a violet grey. The irises are red ringed or blended with yellow. The caudal fin is very broad and powerful, rounded at the angles and not divided into lobes. The other fins are all very short, that is to say the bases occupy but a short space on the body. However, they are deep in comparison with their breadth with bold rounded outlines. The ventral fins of the male, in young fish are identical with those of the female, becoming modified with age into a concave shape, the first ray being greatly thickened.

The bones and muscles attached to the base of these fins in the male, are so fashioned as to enable the fish to draw in the abdomen in a peculiar manner. this has been explained as a means to fascilitate the discharge of milt { Soft roe {fish eggs} or seminal fluid. or it can refer to the male genitalia of fish who reproduce by spraying seminal fluid which contacts the sperm on to the roe}, which other fish hasten by rubbing themselves on stones, objects not often found on muddy bottoms usually frequented by tench.

The tench is very prolific, the ova are greenish and the ova of a female weighing three and a half pounds has been found to contain no less than 297,000 eggs. it spawns in May and June when the males abandon their  leisurely and sedentary habits, appearing  in the character of dashing lovers, racing after the females so impetuously as to sometimes drive them  on to the shore. it has been observed that almost every female is followed by two or more males. The spawn is,in the main, deposited on water weeds.

The first account comes from Daniels 'Rural Sports' which tells of a very large tench taken from a piece of water which had been made the receptacle of waste wood and rubbish for many years. orders had been given to have the pond cleaned out, and nobody expected to find any fish , except perhaps a few eels. However, to the general surprise, when the water was ruin off, some 400 tench, and as many perch, were laid dry. Then in a hole under some roots, a large animal was seen to move, which the workmen took to be an otter.

Forming a ring they tried to bolt him, when the creature was found to be an enormous tench, wedged into the hole, the shape of which he had grown to fit. The dimensions of the fish were recorded with so much precision that the evidence about it can not be set aside. They are as follows--Length from eye to the outer margin of the tail fin 33 inches, circumference  27 inches. Wight eleven pounds, nine and a half ounzes.

Folklore has gathered around this fish, and, many wonderful stories have been attributed to its healing powers, not only on other fish but on man also. However, these tales are myth and many of them border on the incredulous. As for an example Izaak Walton who was accurate in his writings in many respects reports of them. After quoting, without question the authority of Rondeletus for the cure of a sick man in Rome by the application of Tench to his feet, he cites among the sacred remedies known to the Jews the prescription for swallowing live lice-" as a certain cure for the yellow jaundice"

Mr. J.H.Keene, to whose " Practical Fisherman" {1800's} gave some splended information for  fishes, made the following amazing statement-" I myself know of a complete cure of a bad case of jaundice by the agency of Tench. The fish was split open and the inside and back bone taken out, it was then tied over the region of the liver, and in three days the cure was almost perfect. The Tench was was found to have dyed a complete greenish yellow hue, on being taken off"

Mr. Keene also lends his support, as a practical angler, to the groundless statement that Pike, out of gratitude will not attack Tench, and that it is useless to offer that fish as a bait. Sir, Herbert Maxwell in his book British Freshwater Fishes {1904} says of Mr. Keene-" Now, the discredit which is inseparable from silly stories such as these, rightly extends to them that respect them, and it is high time, for the honour of the fisherman's craft, that they should be stopped. It may be impossible to disprove the medicinal properties of the Tench, for it is proverbially difficult to prove a negative, but any man may convince himself that the Pike will seize small tench offered on spinning tackle.

The Rev. W. Haughton states that he has occasionally killed Pike by trolling with a small tench and quotes Mr. Masefield of Ellerton, as having done so frequently but doubtless a more brilliant fish would attract more Pike.

There seems to have been some disagreement in days gone by over the taste of Tench. Richard Franck, who had a fine content of coarse fish in general, was more emphatic, observing the Tench-" Let me tell you he's a delicious morsel"

Others condemned the meat as insufferably muddy in flavour ; but no doubt this was accredited to the seasonable condition of the fish. Sir Herbert Maxwell [1904} declared  " For myself, I can testify that it is the only one of the Carp family that I have never eaten with relish"

From the book 'The Modern practical Angler' {1870}