Stag beetles and their relatives.

This group of insects were formerly placed in the sub division Lamellicornes and comprised the stag beetles, the dung beetles and the chafer beetles which are now placed in Scarabaeoida the scarab beetles.

The largest terrestrial insect in Europe is is the stag beetle species Lucanus cervus. The adult beetle's head and thorax are black. Shiny wing cases are chestnut brown. Adult males are 37-75 mm long. Females live in trees like the elm and particularly oak on the woodland edge, hedgerows,parks and gardens.

They usually emerge from May onwards and by the end of August most of them will have died after mating. They do not survive the winter. Females are often seen on the ground looking for somewhere to lay their eggs. Males on the other hand, tend to be seen flying at dusk looking for a mate.

The females lay small round eggs below the ground near rotting wood particularly near log piles, rotting fallen trees or stumps. When the eggs hatch the larvae live for 3-7 years underground. A fully grown stag beetle larvae can be up to 11 cm long. They are fairly smooth skinned have an orange head and legs and brown jaws. They are quite chunky , and the gut contents can be observed through the skin in the lower half, hence it gives the illusion of a dark patch along the back.

Female stag beetle on the right 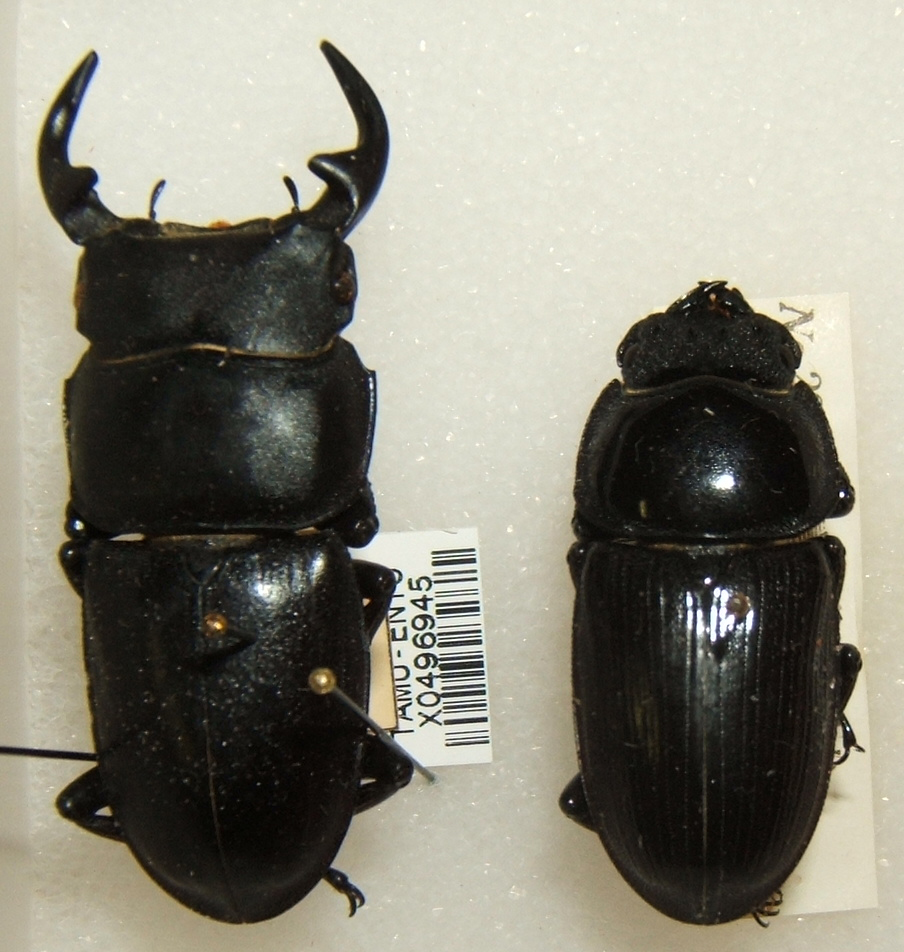 They are nearly always found in damp, decayed or decaying wood below the ground and can be up to 50 cm deep. When they are placed on the ground they position themselves in the C shape. As they come to the end of this period underground the larvae form a cocoon of chips of wood, glued together with a secretion which they emit. Inside this cocoon they transform to pupae and shortly emerge as an adult.

The male is instantly recognizable by its long mandibles.

Menacing in appearance the beetle is harmless!

The male as a powerful and threatening stance with the large menacing madibles but they are in fact harmless creatures. Stag beetles have been studied for years as for an example--Mr. G. Waterhouse {1800s} wrote these remarks to the Entomological Society--" It appeared evident that their mandibles are employed in procuring substinance, possibly by wounding the bark of young trees, in order to cause the sap to flow, upon which these insects feed"

Male specimens were kept in captivity as part of his study. By feeding them with sugar and water supplemented by raspberry juice and other saccharine sources they were kept alive for several weeks, He continued---" For the purpose of lapping up juices or other fluids, it appears to have an extraordinary power of thrusting out the maxillae, the terminal portion of which is extremely long and flexible, not unlike the tongue of a bee. It carefully avoided touching anything with the antennae, although these organs were kept continuously in motion, as if for the purpose of feeling. If by chance they became smeared with sugar or any other matter, the insect immediately cleaned them by drawing them between the thigh of the foreleg and the underside of the thorax, in both parts a velvet-like patch of hair is to observed and it is well adapted for the purpose. The mandibles were employed as above mentioned appears evident, from the insect frequently biting the raspberry to wound it , before applying the maxillae. It also frequently attempted to bite the finger without ever causing an actual wound"

Even though the females jaws are much smaller they cause much more painful injuries to any creature it bites. When threatened the stag beetle rises on its hind legs and opens its jaws, it can be an impressive sight to witness. Having said that the jaws are weak and can do little damage to humans.

Males use their mandibles in fights with other males, the victor eventually turning the vanquished upon its back. When they use their mandibles for this purpose they are acting in the manner of deer stags hence the common and specific name of cervus which is Latin for deer.

Stag beetles across Europe are in decline, they do not occur in Ireland. Significant habitat loss is thought to be the major factor in these declines.

They are protected by the Wildlife and Countryside Act 1981 {as amended} as a Schedule 5 species. They are also a UK BAP Priority species.

In 2006 GREAT STAG BEETLE HUNT 3 began with with additional funding was extended into 2007. Information about these surveys can be found on the P.T.E.S website.

Stag beetles have always been more numerous in the southern counties of England however, recordings came in from Yorkshire NE England and Cheshire NW England.

The noble chafer beetle is a relative of stag beetles and is classed as being vulnerable in the UK.