Sparrow hawks belong to the Accipitridae group of birds and placed in the genus Accipter which derives from the Latin accipere meaning to grasp, alluding to the talons in this group of birds. the female is much larger than the male up to 25%, the largest difference in any bird species.

This species is a common enough sight throughout England in the places suited to its habits and food. They thrive in wooded areas with meadows or open land near by. The female is a much bolder and daring bird and can be observed hunting near villages where she takes her prey, usually small birds, either perched, in the air or by swooping them up from the ground. The male however, being smaller and less inclined to break cover, hunts in woodland where he feeds on finches and other small birds. Weak or aged pigeons and doves will also feature in their diet.

The flight of the sparrow hawk is particularly buoyant despite its relatively short wings.

Lifestyle of the sparrowhawk

In days gone by the sparrowhawk was highly valued by the falconer who was impressed by the birds seeming willingness to be taught by his master. the bird was regarded as being courageous and daring, attacking birds  much superior in size. The female because of her larger size was trained to take partridges and quail.

This hawk is the greatest enemy of sparrows and other small birds, and they take them at every disadvantage, they have no way of escape but by flying into a hole in a tree or hiding themselves in some other way from observation. If they are aware of the sparrowhawks presence  in the vicinity and there is no shelter they will crouch low to the ground and in this manner sometimes escape the birds attention.

When in search of prey it flies with the swiftness and skill needed to surprise its victim. Sometimes the sparrowhawk will skim close to the ground or close to hedges. When it arrives at the spot where its victims are known to be found he arrives swiftly in the manner described and descends on the little flock and having seized its victim, carries it off to a favoured retreat. The larger birds are plucked clean before they are eaten. The smaller ones may be swallowed almost entire. 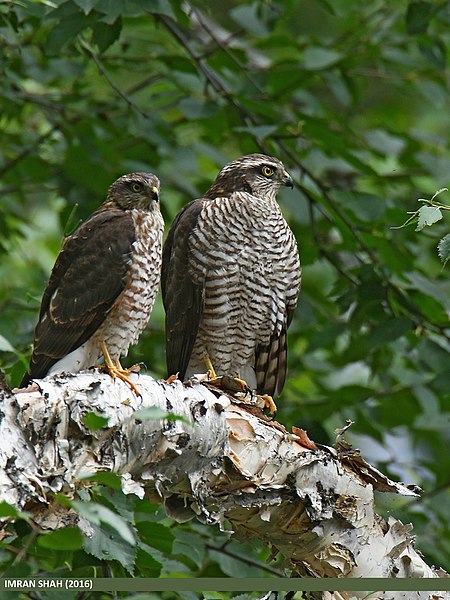 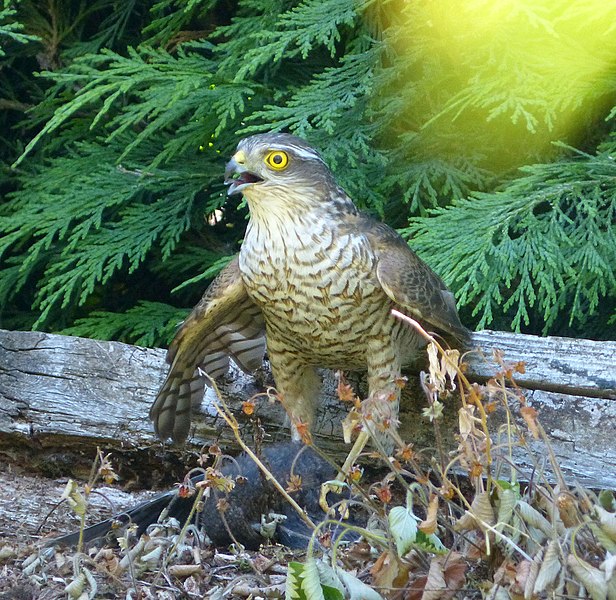 Description of the sparrowhawk

The plumage of the male is a slate or bluish grey, female is grey brown and the young dark brown above the underparts are whitish to rufous , barred.Above the eyes is an interrupted band of white which passes to the back of the head and is permanent at all ages. The tail and upper tail coverts are of the same colour as the back and wings. The wings are somewhat broad and bluntish. The bill is hooked blue at the base, the tip a dark horn colour. The base of the under mandible is a shade of yellow. The cere and the orbits are yellow or gold . The tail is prominently barred.

It relation to its body size the the wings are medium short. the tail medium long.The neck is short , the bill medium to short and the legs a medium length. The entire length of the male is twelve inches, the tail extends about three inches beyond the tip of the wings. The male weighs about 100 gms the female up to 500gms. The wing span is between 23 and a half  to 32 inches.

The sparrowhawk has been separated from the genus Astur in which it was formerly placed on account of its long slender legs.

Movement. The most characteristic flight habit is the quick dash along the hedgerow up and over to pounce on its prey. Also has a fast low flight through the undergrowth  of a wood or across open ground. Capable of circling high and plunging in the manner of a gannet with folded wings

In the month of April the sparrowhawk retires into the woods, where, after mating they choose a suitable location for the nest. It is usually in the upper branches of  a pine or fir tree.

NEST AND EGGS---The nest is constructed of sticks and twigs and lined with moss and hair, and  is somewhat flat and shallow. Sometimes a deserted crow's nest is chosen as the platform.

The eggs which number four {but more rarely number as many as seven} are marked with reddish brown blotches upon a bluish white background. The eggs are incubated for around 33 days and the task is undertaken by the female.

The young birds when first hatched are covered with a white down. The females in the set can be detected even at this early stage by their superior size.they are fed upon small birds mice and insects. The mother will courageously defend the nest and her offspring if molested. She is willing to loose her life before she will desert them. The male much more shy will retreat on the first alarm and from a distance will observe any tragedy that ensues.

The sparrowhawk along with many other birds of prey were persecuted during the the 1960's and 70's almost to the point of extinction.  They then became protected under Schedule 1 of the Wildlife and Countryside Act 1981 which made persecution illegal and gave the birds full protection under the law including their nest and eggs and young. Today the population numbers are recovering but are still below the numbers that occurred before the persecution began. 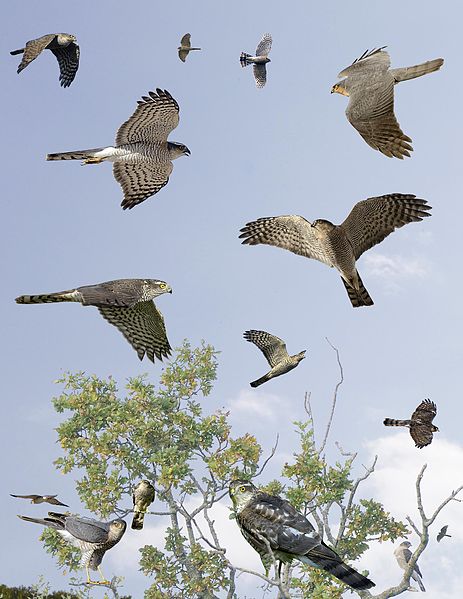 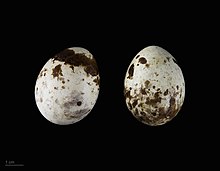 Associated pages. Click on the relevant content banners at the top of this page. Scroll down to view.

Also see Birds via the links banner { Birds of Europe} with notes and observations from past ornithologists and other eminent writers.