Slow-worms belong to the order Squamata and the Family Anguidae and placed in the genus Anguis. It is probably our commonest reptile. In days gone by , this legless lizard was referred to as the blindworm, and because there was no external evidence of limbs it was often classed with the snakes. Anatomical examination of its tructure was sufficient to do away with this notion and it was rightfully placed with the lizards.

Blindworm ? In his book The Young Naturalist {1909} W Percival Westell states: " It is most certainly not blind; it possesses eyelids and these being closed has doubtless resulted in the stupid name of "blind" being accorded to it. Dr Leighton has given us an excellent table of differences between lizards and snakes, it is very important  to emphasis here the distinctions that exist between these two types of reptiles----

"The rudimentary limbs in this creature are interesting and cause it to be placed in a seperate family Anguidae, and although it would be incorrect to write of the slow-worm other than as a snake like lizard, it does serve to show some sort of connecting link between lizards and snakes" 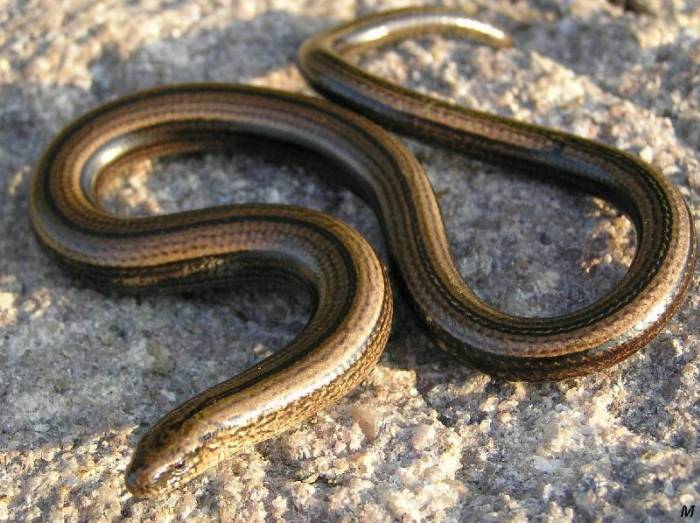 This native reptile may vary in colouration; the male can be uniformly greyish-brown or bronze on back and sides with a paler belly; some males have blue spotting on upper side. or the belly may be mottled black or dark grey, they also have proportionally larger heads. They measure 40-45 cm long. {14-16 inches} in length.

Females are reddish-brown with a dark vertebral stripe, may have dark flecked striped flanks and black belly.

When the weather is dull the slow-worm will conceal itself under stones and vegetation, but when the sun is out this cold blooded reptile will bathe its body in the suns warmth. In common with other lizards, the slow-worm is capable of loosing parts of its tail if necessity demands it! this capability helps the creature to evade capture from predators. This is particularly true should the slow-worm be attacked from behind. the predator will be left with a small portion of its tail, while the slow-worm escapes. It will regrow another piece to compensate for the loss, but this is seldom as long as the original part. Thus the slow-worm may well save its life by loosing this appendage.

The movement of the slow-worm as it makes its way through the herbage is smooth and done at an easy pace, however, at times it can move with a surprising speed.

The diet of the slow-worm should be noted by the gardener for it includes a great amount of slugs and snails. Being a nocturnal creature this fact is not always appreciated. it is a sad fact that these most useful of creatures are often killed for having the unfortunate {for them} appearance of a snake. When many people think of snakes they think of being bitten and/or poisoned, hence the slow-worm suffers. Education and  the fact that they are now legally protected under the Wildlife and Countryside Act 1981, has led to a decrease in this act of persecution.

Hibernation occurs from Mid October until Late February-early March. They often hibernate communally in disused burrows, crevices under tree roots, rocks, walls or under loose leaves or stones. when they emerge from hibernation the creature may be encountered basking in the early morning and evening sun. This helps them to get conditioned for the breeding season.

The slow worm mates in spring, usually in May. The gestation period is 4-5 months and the young are borne in late summer. The slow-worm is ovi-viparous { the young being borne in an egg membrane that breaks soon after the birth}. New born slow-worms are around 65-90mm long and a brood can consist of between 6-12 with 8 thought to be about the average. broods of up to 26 have been recorded but these are exceptional.

The young also vary in colouration from pale, golden brown, yellow, green or silver above with a dark stripe along the back.  Sides of head and belly are jet black. Males loose the dark stripe when they are old enough to breed at around three years of age.

The diet for young and for adults consists of slugs, snails, worms, insect and their larvae, small grass snakes and newborn mice and voles.

They frequent habitats such as rail way embankments, cliffs, heathland, commons, clearings in woodland, hedge banks,and old walls and ruins  so long as they are well covered with vegetation.

There are no current conservation issues concerning the slow worm, however, they are continually monitored by Conservations groups such as the Amphibian and Reptile Group.

It is always interesting to look back at historical perceptions of wildlife.The text below, is from the book," British Reptiles and Amphibians ", by A Nicol Simpson F,Z,F.  Printed in 1913, when the countryside and its denizens remained relatively unscathed from the great changes that lay ahead.

" This is found all over the mainland of our island, but does  not seem to be indigenous to Ireland. As a rule our reptiles are not seen early, or late in the year, and perhaps the Slow-worm appears first and appears before any of the other seven enumerated. It is what is termed as ovoviviparous { Ovoviviparity},which means it brings forth its young alive. The number may range from six to twice that number at a time."

" This reptile on being touched has the faculty of stiffening its whole body, and if roughly handled a portion of its tail will break off. The deleted portion may be replaced by fresh growth, more or less a replica of the original."

"The adult slow-worm dines on small slugs,worms etc. the whole body  is covered with minute,and finely rounded,close fitting scales. The tongue is notched at the tip and the teeth are slightly hooked. At birth the young are a dull white in colour,becoming a light-sable grey with age.A dark streak runs down the back, the colour of the upper parts becomes more distinct and takes on a metallic sheen. A number of parallel rows of dark spots extend along the ridge of the back and sides at this stage.beneath, the colour is whitish over-spread with a bluish lustre."

" I recall my first acquaintance as a budding naturalist with this reptile. I had read the slow-worm in text books and elsewhere, but so far I had never seen the reptile in the flesh.I had been trout fishing from early morning, and had sat down to enjoy my lunch . As I munched my dry biscuit and cheese I Idly observed a big worm {as I then thought}, cross over the adjacent bank. Instinctively I followed, to find the animal coiled upon the edge of a grassy footpath. At the time,I confess, I was at a loss to identify the specie, and with,{I am afraid}, special precautions,I reconnoitered the situation. As I did so,I was rather surprised to see the creature was reluctant to move. It was evidently unconscious of my presence. I pushed the end of my rod against its body,when it immediately glided away amongst the ranker vegetation. As it moved off I renewed my efforts to relocate it, but hat first slow-worm I never saw again."

" In some districts the slow-worm is also called the 'blind-worm', the latter designation may be traced to the fact, that, the eyes are small and not readily observed; or it may be accounted for by the fact that when dead the animal's inconspicuous eyes are hidden by their lids. Yet close examination prove that these optics are quite clear and sufficient for their purpose. The slow-worm, even when hunting, likes to have a retreat in case of danger. A stone heap or a dense patch of vegetation provides the security, and to such quarters, the slow-worm retreats when danger threatens."

The above text is a small portion of the writers chapter on slow -worm. To read the full text you must visit www.Biodiversitylibrary.org. Look for the book via the search bar provided.