Silverweed belongs to the Order of plants known as the Rosales and the Family Rosaceae and the genus Potentilla { since the 1990's some botanists place them in the genus Argentina the name derives from the Latin argentum meaning silver}. The species name of ansernia derives from the Latin anser meaning a goose, this alludes to the fact that geese are said to be fond of the foliage or the leaves were used to stuff geese in days gone by to supply a seasoning}

This lovely little flower with its prominent foliage is a familiar plant to most lovers of nature. The common name of silver weed is an apt description of the plant for the underside of the leaf surface is thickly clothed with a silky white down or felting of soft hair which as a general effect of a frosted-silver colour. The genus name of Potentilla is derived from the Latin adjective potens, meaning powerful, in allusion to the medicinal properties of some of the species in the genus.

In days gone by this plant  was often referred to as the 'Princes Feather' which was also an apt name in England, as the pinnate leaves have a curve in the axis, and a drooping at the tips of the individual leaflets, that have a fanciful resemblance to the Ostrich feathers that form the crest of the Prince of Wales. The foliage of the silverweed is so different from the ordinary shades of green encountered in the foliage of most plants, just adds to the resemblance.

The foliage of the silverweed is described as being pinnate which is a central midrib with lateral leaflets given off either side giving a feather like appearance, from the Latin word pinna meaning a feather which supplies the root of the word pinnate. The foliage produces leaflets that  do not in crease in size in the pairs of leaflets that succeed each other. Rather larger leaflets are separated by others which are smaller. This is termed as being interuptedly pinnate. This form of leaf arrangenment can also be found in plants such as Avens, Agrimony, Meadowsweet and many others. In all these species the arrangement is a pleasing result.

The buttercup like flowers are in bloom from early summer till late autumn and are borne singly on long stems produced from the axils of the foliage. They are relatively large, with five petals of a brilliant yellow colour and the calyx is divided into ten divisions. In common with plants such as the Periwinkle {Vinca varieties} the silverweed spreads quite readily by means of its long creeping runners and is therefore, when found at all, met with in profusion.

The plant is very abundant in Britain, and indeed throughout the temperate regions of the world. It is sufficiently handsome as to alert the attention of plant enthusiasts. 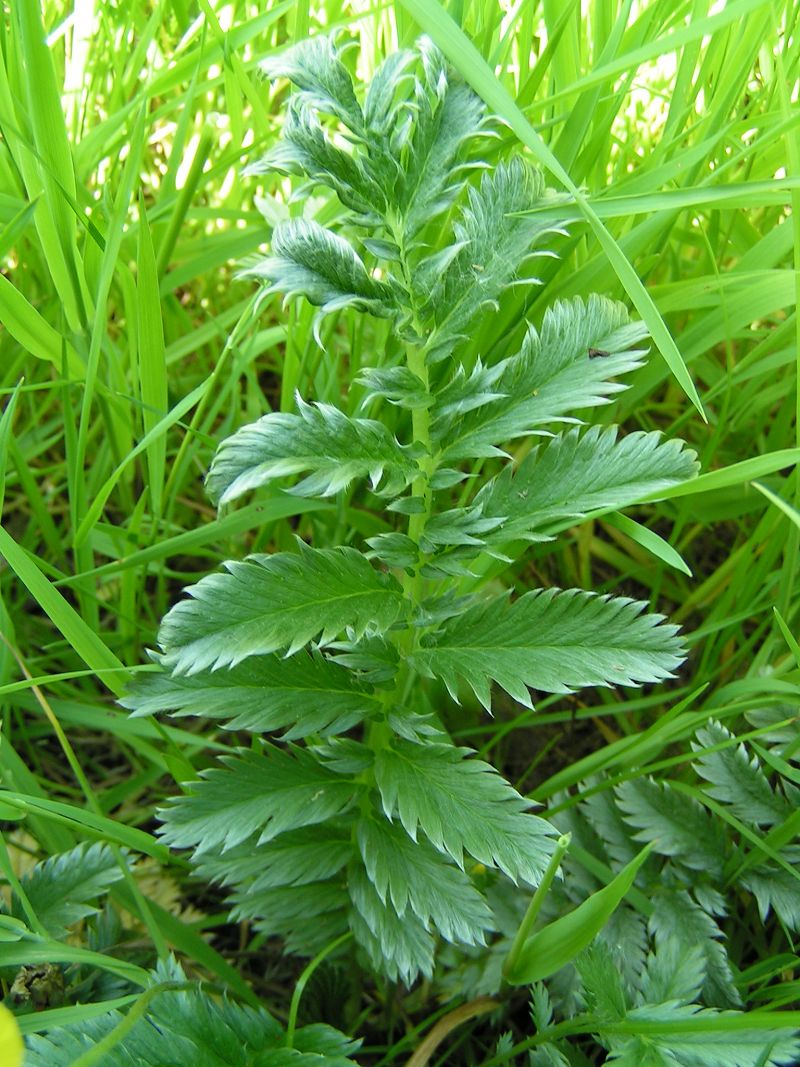 All parts of this plant contains tannin. The whole plant was harvested and dried for its mildly astringent and tonic action. The roots which are even more astringent have been also utilized has have the seeds.It was recommended by herbalists that the plant was gathered in June and only the perfect leaves being harvested. They had to be collected in dry weather, in the morning, after the sun had dried off the dew.

Unless a drying shed {which produced artificial heat} was available to the harvester, this operation needed to be carried out with the leaves placed in the shade as this helped them to retain their colour. They were placed on a bench three to four feet from the ground, especially one made of wire mesh, which allowed circulation.

As far as administering the herbalists had a variety of methods. To stop the bleeding of the  infliction commonly termed as the piles, it was recommended in the form of a strong infusion, while at the same time an ordinary strength infusion being taken as medicine. The dose was recommended as being one ounce of dried herb to a pint of boiling water.

This same infusion, sweetened with honey was regarded as being an excellent gargle for a sore throat. Powdered herb was also taken every three hours at the dose of one tablespoon of powder per infusion.  Herbalists also recommended silverweed as a remedy for cramps in the stomach, heart and abdomen. For these ailments it was also deemed helpful that in addition to the medicine a compress soaked in the infusion should be applied to the affected parts.

More up to date herbals recommend that the forager should harvest the plant just before flowering, and dry it for use in infusions to treat diarrhoea and as a mouthwash or gargle for gum disease and for sore throats. The method they prescribe is the infusion is made from one ounce of dried herb or two ounces of fresh herb {leaves} in half a pint of water. Leave for at least twenty minutes before straining. Gargle with two fluid ounces of the infusion for a minute every two hours for acute sore throats.

Note---Anyone considering using herbal preparations for internal use should click on the content banner on the right hand side of this page -WILD HERB ADVISE.

Images that occur on this page may be reused. However, the name of the author must be attributed along with any accompanying license.

The buttercup-like  of the Silverweed. Courtesy of Phil Sellens {UK} CC BY-SA 2.0 License.

All other flowers that feature on this site can be viewed by clicking on to the relevant content banners on the right hand side of this page.{ they are all grouped together} .

Links. Yellow Rattle and hay meadows. Click on the Links banner on the right hand side of this page. Scroll down to relevant box. Click. this is a direct link to the article home page.

Flora via links. click on the Links banner at the top of this page. Scroll down to relevant box Click this is a direct link to the article. Includes the series Past and Present Medicinal Uses.