The pike  belongs to the family Esocidae and the Order Esociformes and placed in the Genus Esox. The specific name for the pike is lucius and this species is found  throughout the northern Hemisphere in fresh water including the UK and Ireland.

Esox is a genus of soft finned fish with abdominal fins in which the edge of the upper jaw is formed by the intermaxillary bones or where it is not completely formed the maxillary bone { Upper jaw bone -from the Latin for jaw} is without teeth, and concealed in the thickness of the lips.

Generally speaking, fishes in this family are voracious, particularly those in the Esox genus. The pike has small internaxillary bones furnished with little pointed teeth in the middle of the upper jaw. In the middle of the lower jaw there are ragged teeth, which, in a fish of large size are scarcely less than the cannines of a small dog. No fresh water fish bites so powerfully as the pike, which is looked upon as a fish that is destructive to other fishes.

The flesh of the pike is white and firm, but rather dry, and in archaic times, it was held in considerable esteem for the table. It was once believed that the pike was unknown in England's rivers before the time of Henry the eighth and that when they were first introduced they were so rare, that they each sold for the price of a "house lamb". However, science estimates they have occurred for around 25 million years, especially in the remote northern rivers and lakes.

Description of the pike.

The general appearance of the pike does not find favour with many people. It is ragged, savage and somewhat ugly looking fish and a large portion of the middle of its body being nearly equal in thickness giving the pike a lumpy appearance.The head is very flat; the eyes small and the irides {iris} is golden yellow. The upper jaw is broad but shorter than the lower one, and the lower one turns upward at the tip, where it is marked by minute punctures.

The teeth as already mentioned, are very numerous and very sharp. the intermaxillary bones allow the jaw to open very wide, allowing this voracious predator to eat very large prey. The body is considerably elongated, the back broad and almost square when the fish is in good breeding condition. At this time also, the colours on the back and sides are very fine, consisting of green, mottled, with bright yellow and the gills of a bright red colour indicating a vigorous degree of circulation.

When the fish is seen out of season, these colours fade, the green turns grey, and the gills are dull and darkish. The pectoral fins { either of a pair of fins, situated just behind the head that help control the direction and movement} are situated immediately behind the gill openings. The ventral fins are in the middle of the body { on the under side} , another name for the pelvic fin.

The pike is fond of dull shady and unfrequented waters; they prefer a hard bottom to one covered in mud. In summer they are found among aquatic plants near the bank; but in winter they submerge into the depths and conceal themselves, if possible under some projecting stone or irregularity at the bottom.

The spawning time for the pike is in March and April; a little sooner or later, according to the place and season. For this purpose they lay their eggs among the roots of aquatic vegetation. Ducks and other water birds are particularly fond of pike spawn, and, not only consume it, but carry it off, adhering to their feathers and feet with out the vitality being destroyed. by this means pike often make their appearance in water bodies where there were none before.

Some historical records concerning the Pike.

Dr Plott, says " At Lord Gower's canal at Trentham, a pike seized the head of a swan, while feeding under the water, and gorged so much of it as killed both, the servants observing the swan to remain motionless went in a boat, and found both swan and pike dead"

" one of the largest caught by "trolling" was taken by Colonal Thornton in Scotland in the year 1784; this fish was four feet, nine inches long and eleven inches and a half deep in the body, and weighed within two ounces of fifty pounds. The Colonal had him on the line for an hour and a quarter before his strength exhausted"

the next few paragraphs are from the book  The Complete Angler, printed in 1897--" The mighty Luce, or Pike, is taken to be a tyrant {as the Salmon is king } of fresh waters.----" Sir Francis Bacon, in his History of Life and Death, observes the pike to be the longest lived fish, and yet he computes it to be not usually above 40 years, and others think it is not above 10 years. However, it is smaller or middle sized pike being by most and choicest palates, observed to be the best meat."

" The pike is also observed to be solitary , melancholy and a bold fish, melancholy because he swims or rests himself alone, and never swims in shoals or with company, as roach and dace and most other fish do. Gesner, observes that the jawbone, and heart and gills of pike are very medicinable for several diseases; or to stop blood, to abate fever, to cure agues, to expose or expel the infection of the plague, and to many ways medicinable and useful for the good of man kind, but he observes that the biting of pike is venemous, and hard to cure".

" you may fish for pike with a ledger or by walking bait and you are to note, that I call that a ledger bait, which is fixed or made to rest in one certain place when you shall be absent from it; and I call that a walking bait which you take with you and ever in motion; concerning which two, I shall give you this direction, that your ledger bait is best to be living bait, though a dead one may catch, whether it be a fish or frog"

The above notes are for historical interest only and one needs to keep up to date with modern day law and regulations. to this end I quote from the Pike Anglers Club of Great Britain--

* In England and Wales the close season for coarse fish including the Pike is between March 15 to 15 June inclusive.

* The close season does not apply to most canals in England and Wales. There are however, some exceptions that retain the close season for conservation reasons.

*  The close season applies to all rivers, streams and drains but does not apply to most still waters.

Where the statutory coarse fish close season has been removed, fishery owners and Angling clubs are free to introduce a close season through club or fishery rules if they choose to.

It is wise to remember that everyone over the age of 12 wishing to fish in England and Wales must be in possession of a valid rod licence. To fish for pike and non-migratory trout a coarse Fish Licence is required. Rod licences are available from every Post Office in England and Wales. remember also that a licence does not give permission to fish, this must be sought from the Fishery owner. For more information on pike fishing and the law visit the Pike Angler's Club of Great Britain Website. For visitors outside the UK, you will need to explore the Law and Regulations of the country in which you reside. 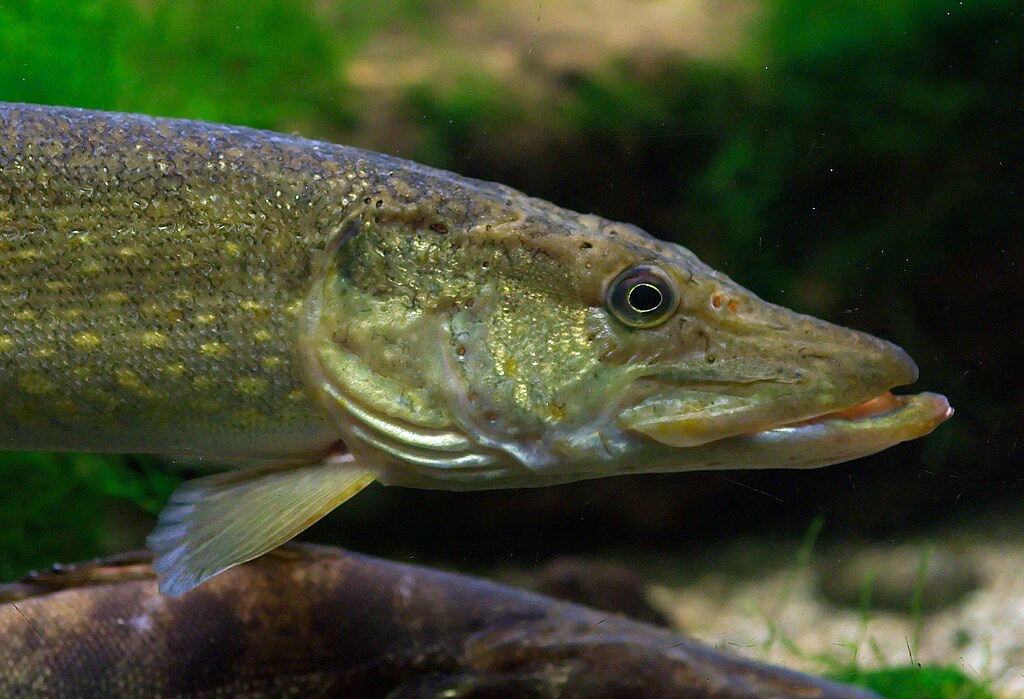 Live baits are banned on the above named waters.

All course fish including roach, perch and eel.

The following species are classed as sea fish and can be used as bait in the waters named above.

Other regions may well apply different regulations, practices and bye laws, so anglers are advised to check out these directions in the region that they intend to fish.

The name of the relevant author must be attributed along with the accompanying license.