Newts belong to the Salamandridae family in the Order Caudata/Urodela; Here in the UK we have three native species The Great Crested newt T.cristatus, The Smooth newt T. vulgaris, and the one under review here the Palmate newt,T.helveticus.

A Insight From The Past Century---

A. Nicol Simpson in the British Reptiles and Amphibians published in 1913 the newt had the scientific name of Molge palmata. The book states; " Evidently this species is more widely distributed throughout Britain than is commonly surmised. it is found in Scotland , and like all other newts, irrespective of species, is spoken of as the Water Esk, or simply the Esk. Wherever located, it is by no means a difficult task to fish this creature out of its element.

A small net dragged through the shallows will likely land a few of these newts if they actually frequent the place" I continue with some more text from the book to give the reader an historic feel  of that time almost one hundred years ago and how the species was considered at that time.

" Water logged pastures where the ground retains the moisture all the year round are favourite haunts of the Palmate newt. On one of these old commons the writer has seen as many as a dozen fished out during a few hours. In some parts of the country a common pasturage for the village cows is yet an institution, the cattle being placed under the care of the herd-boy, who tends to them while at pasture, and brings them home at stated intervals during the day.

This practice of rural co-partnery is gradually dying out, but at one time it was one of the picturesque features of rural life. These commons were never touched by the plough, but carried natural grasses year after year. The earth consequently took on a crust it would not do otherwise, and in hollow places stood many inches deep throughout the summer.

In the morning the herd boy leisurely strolled down the village street, blowing a rude horn, to warn the natives that they must unbind their livestock. As he moved down the street each cow came from its shed and joined the ever-increasing herd. Slowly the kine moved instinctively towards the common, and spread over the pastures. The herd-boy would drop beside a friendly bush and fashion a whip-handle, or watch the birds and insects that flitted across his domain. Now and again he would entice newts from the sluggish pools, and it was while thus engaged the writer formed this herd-boy acquaintance.

The boy did not know the species he captured, but yet he knew how to keep them alive until he tired of them. ---In his herd there were four ponies and an aged horse, the latter being a pensioner. he surmised the newts bit the latter and crippled it some days. The cows, according to his view, were never harmed, nor the ponies, only the aged mare. a week before I met him he had to leave the horse on the common over night, and in the morning he found a dead newt by its side, which he said the horse had killed while warding off an attack.

The old horse was too frail to defend itself, I pointed out, but the herd-boy had his grandfather's word for it that newts are deadly enemies of every living thing that was aged.----The herd- boy's grandfather was ninety six years of age; I met him that same evening---he confided in me that the best time to catch newts was when they are pairing. He said that they were tamer in disposition at such time, and would allow anyone to approach them then. he had caught them on the common eighty years ago , as a boy, and kept them alive for several years in succession. He had even sent live specimens to London in boxes, via the mail-coach, and they had arrived safely. Of late years he had not given Newts much attention, because he found they were "dangerous". He believed they attacked cattle, and often caused cows to retain their milk, and as a good citizen he could not conscientiously retain them about his premises."

It is a fact of our natural history that many creatures were regarded with supertition, myth and folklore which was handed down from generation to generation a truly believed to be fact. Many creatures suffered greatly through this conveyance the newt is just one of the  creatures to have done so, despite it being completely harmless. 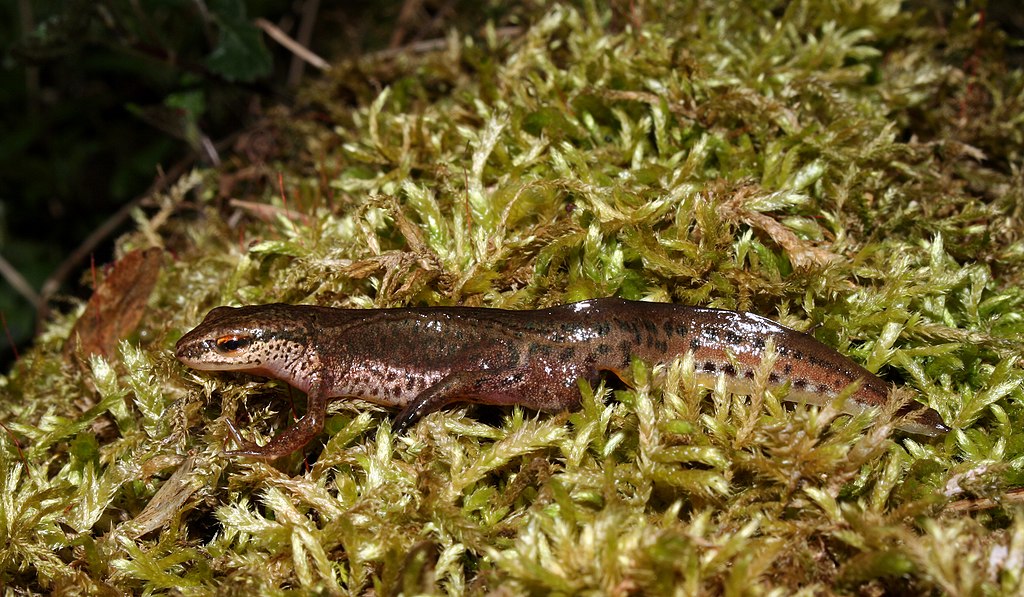 Today the palmate newt is still the most widespread species on newt in the UK. The range of this little amphibian spreads from high mountainous regions of N.W.Scotland, to the salty coastal plain of S.W. England.  It is found throughout Wales but alas does not occur in Ireland.

It was not until 1843 that it was described in the UK., however, it is thought that this native species was around for a very long time previous to that period.  It is quite possible before that date they had been mis-identified as the very similar species the Smooth newt .The two species often share the same ponds and pools compounding matters even further. However, this adaptable newt is not as fussy as the smooth newt and will be found in many localities that the latter would not. Palmate newts may also be found in small and shallow garden ponds.

Description of the palmate newt.

It is the smallest of the native species that occurs in the UK. They are 7-11 cm long. In some populations the adults only reach 5-6 cm long . as previously mentioned it is quite difficult to tell the palmate newt from the smooth newt; females of the two species can be told apart by the fact that the throat of the smooth newt is spotted and that of the palmate newt is a plain whitish or yellowish colour.

The male in breeding condition, is easier to tell from the male smooth newt. Palmate males have a filament at the end of the tail {see photograph above} and black webbing on the back feet, neither of which are present in the smooth newt.

However, both species are brown in colour, with yellow/orange under bellies and both species seldom exceed 10 cm.

The palmate newt females-have dorsal surface and flanks of a yellowish to olive brown with dark freckling. Males olive brown, spotted and marbled with dark colours which may fuse to form two lines along the back. The ventral surface is a uniform creamy yellow or orangey. Occasionally some brown spotting may occur on the belly. There is a dark stripe passing through the eye on either side of the head.

By April newts are back in the breeding ponds.

In early March, male palmate newts leave their terrestrial hideaways and head for the breeding ponds. By April he will turn his attention to the female.His breeding ploy includes a combination of posturing which includes splaying of the webbed feet, and frantic lashing of the tail.

After the mating as occurred the female lays over 300 eggs each of which is concealed beneath a leaf of submerged vegetation. The tadpoles develop with amazing rapidity and unlike frogs they grow their front legs first. they are ready to metamorphose when they are about 25mm long. At this time they loose their bright red gills that have sustained life through their aquatic stage.

Palmate newt larvae. The English one pence piece gives a scale of the size at this stage of their development. 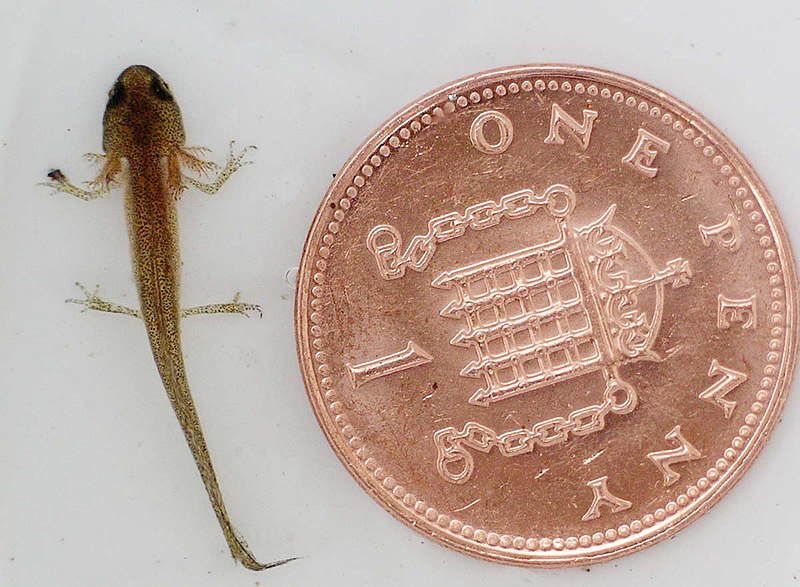 In water palmate newts are ravenous predators tackling anything they can fit into their mouths. This includes a wide range of aquatic invertebrates, fish fry and tadpoles {even their own species}, tadpoles are entirely carnivorous.

During July the adult newts leave the water, the males absorb their tail filament and become more drab in appearance. On land the palmate newt is somewhat clumbersome , particularly when it is cold. A range of predators are a threat to them they include the kestrel, heron, fox, badger, grass snake and even the domestic cat. They rely heavily on camouflage to avoid them.

They are fully terrestrial during August and September preparing for hibernation by feeding on worms and other small invertebrates. They typically hibernate in deep leaf litter commencing in late September.

The images on this page may be reused. However, the name of the relevant author must be attributed along with the relevant license.