The mighty oaks of England

BELOW Even in its winter garb the oak is recognizable. Top. The winter twigs of oak. 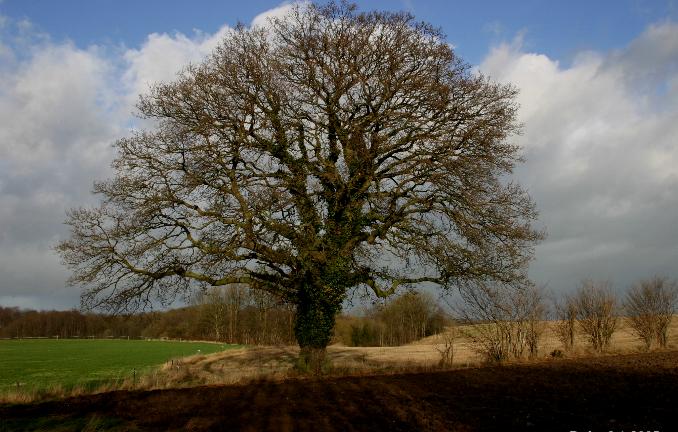 If ever a tree epitomiezd endurance in the English countryside it is the English oak Quercus robur. {The genus name derives from two Celtic words. "quer" indicates fine + "cuez" a tree, while the species name robur indicates hard wood} These mighty arboreal structures are mighty in stature and mighty in the use to mankind. From as far back in our history as the Druids {Driud loosely translated means tree lover} they have been held in high esteem. The Druids planted oaks in great numbers, beneath their copious boughs they held rites and even local courts where they administered justice according to the laws of that time.

Also in the depths of our history is the fact that Charles the second,who's army was all but annihilated by Cromwell's Round heads was forced to hide in an oak tree for many hours while his adversaries searched for him without success. Later the trees were often referred to as the Royal Oak. This name is still retained in the names of many public houses and inns throughout the country.

It was the mighty oaks that were utilised in the building of the "Wooden Walls of England" a reference to the wooden sailing ships that defeated the Armada and participated in many other battles. It is estimated that it took a thousand mature oaks to build each one.

Above the mighty oak tree courtesy of Linda Kooper

Oaks have been used medicinally and for culinary purposes, especially the fruit of the tree the acorn. Studies have revealed that a mature is capable of producing over 50,000 acorns. These fruits are of tremendous importance to the wildlife of Britain, where they are taken and often buried by creatures such as the jay,squirrel and wood  pigeon, certain woodpeckers, mice and other small mammals. Many of the buried acorns are not recovered and therefore germinate, thus many creatures help in the distribution of the species.

In England their are two native species of oak the other being the Quercus petraea the Sessile oak {often referred to as the Durmast oak}. When the acorns are in evidence on the tree it is one of the best times of differentiating the two species.  The acorn of  the English oak are borne on long stalks called penduncles {hence the trees alternative name of the Pendunculate oak} while those of the Sessile oak sit directly on the twig {sessile indicating stalk-less} Conversely the leaf of the English oak has hardly any stalk while those of the sessile oak have a more prominent stalk.

BELOW --The green acorn will become hard and brown by the autumn.

Acorns have fed animals such as pigs for centuries which has been well documented but they have also been utilised by man for culinary purposes. They were once roasted and ground in to a powder that was used as a passable substitute  for coffee. They were even used to make bread once they had first been boiled, then when dried crushed into a powder which was then used as a flour.

In archaic times many parts of the oak tree was employed for medicinal use, but most have fell out of favour, save for the bark which is used by herbalists in the preparations to counteract haemorrhage's being of an astringent nature. Like other astringents {binding} it is thought to counteract the symptoms of diarrhoea and dysentery. These were administered in the form of a decoction. This decoction was also used as a gargle for throat infections and to stop the bleeding of the gums. Oak bark was dried out and crushed into a fine powder that was employed as a snuff for clearing the head of catarrh.

Other structures are also commonly associated with the oak tree, especially oak galls, one in particular the "knopper gall" has become wide spread in England in the last few years. They are caused by gall wasps, tiny insects that resemble thin flies rather than wasps. The wasp associated with this affliction is Andricus quercuscalicis.

The abnormal acorns affected develop during the summer months and may easily be replaced by a virulent growth of the gall in the cup spreading over the fruit leaving a bizarre knobbly growth in its wake. Once the cup and growth fall away in late autumn they will remain green until late spring when a female wasp will emerge through a tiny hole at the top of the gall. In the north of England this type of gall was uncommon until about 15 years ago but is now an annual feature on many trees.

A more common gall associated with the tree is the marble oak gall. These are often referred to as oak apples a popular misconception for the latter are of a much greater size at up to 5cm {2 inches} in diameter. The oak marble gall is approximately 18-20mm in diameter and as the common name suggests about the size of a marble. When these galls begin to form they are of a green colour, however, it is not long before they turn to a grey brown colour and very hard to the touch. The gall is caused by the gall wasp Andricus kollari. The grub develops inside this protective globe until they emerge as adults from a tiny hole. Another peculiarity of this gall is the length of time it remains on the tree after it has been vacated. It can be several years before they finally disintegrate.

BELOW  The Marble Oak gall. The tiny holes are clearly shown where the gall wasp has emerged.

There is a worrying development as far as the future of the oak is concerned. There is a disease known as the sudden oak death which has cut swathes through the America's West Coast since the mid 1990s. here in England we had been fortunate not to have been under attack. That changed in 2001 when the culprit responsible a fungus like organism Phytophthora ramorum was discovered attacking a small number of trees not native to our shores. The spores of P.ramorum are spread by rain drops and in the case of many garden centers and nurseries by way of sprinklers, for this disease affects many ornamental trees and shrubs. Indeed, it was very likely that it arrived here via ornamental imports.

Studies have revealed  that P ramorum is at times restricted to the shoots and foliage of healthy trees, however, should the host be weakened by some injury, whether occurring naturally or by some mechanical means, allowing the disease to get under the bark it becomes a much more serious threat. The countless number of spores that infect the tree may well spread throughout its system and the tree will eventually die. A classic symptom of an infected trunk is knobbly growths that emit a dark coloured sticky sap.

A contingency plan which includes destroying all infected imports and nurseries has helped to keep the spread at bay. However, the research department of the forestry commission has now found a more potent strain which they have initially called P.kernovii has been discovered growing along side P. ramorum which has attacked native oaks.

It was recorded in the south west of England and at a nursery in the north west of England. All affected specimens were destroyed. According to Dr,Stephanie Pain when two trees grow in close proximity, hybrids may well occur which are more aggressive than either parent. She went on the state " There is a worrying precedent, in1993 alder trees{Alnus} growing along the England's rivers began to die. In 1999, the culprit was identified as a hybrid between two introduced alien Phytophthoros, since then at least 20% of English alders have died"

So the biggest threat to England's mighty oaks since the days of the Armada {who's sailors were told to burn down oak forests had they won the battle} may well be lurking undetected somewhere in the English countryside, and its not just oaks under threat many of our native trees and shrubs may also be assaulted.

The disease affects over 2,000 hectares in the south west of England and is making headway in other regions particularly in the south of the country and south Wales. The spread of the disease to other species such as the larch and the rhododendron is a worry development.

Further updates concerning this disease will be placed at the link CONSERVATION UPDATES,  at the top right of this page.

Below --a windswept oak

The images on this page may be reused. However, the name of the relevant author must be attributed along with any accompanying license