The Hazel Tree a stalwart of the English countryside.

Hazels go largely unnoticed after the catkins have been succeeded by the foliage until the nuts begin to form. Yet this tree has long been part of our rural heritage. It is a member of the birch family Betulaceae, however, in some natural history books they are put in a family of their own-Corylaceae. It is usually shrub like rather than tree like in both size and form, being multi -stemmed. Hazels are 9-10years old before they produce the first flowers which appear in the form of catkins, well before the leaves unfurl. These prominent catkins are of a yellowish colour and hang like elongated tassels, known to country people as "lambs tails".

Locally they are found as early as December defying the snow,bitter cold winds and frost. They begin to elongate during February and March. Lambs tails-the name always suggest to me a feminine catkin, yet these are the male catkins. The female catkins are of a crimson colour and are tiny. They look like ragged wicks of a candle. A hand lens is needed to observe them properly. The male catkins have scales  that spread open to allow the yellow anthers to release pollen which is shaken out by the wind.

The advantage of flowering before the foliage opens is that the pollen can more readily be blown from one tree to another. It is vital to pollination that pollen reaches the tiny red female catkins for when they are fertilized the nuts begin to form. The foliage is rounded with toothed margins and pointed tips. The surface is slightly rough to touch.

During the winter the ends of the young twigs  are often reddish in colour and have rough hairs. The multi-stemmed appearance is often due to coppicing. Young stems can grow to 3 meters tall, very straight with a shiny brown bark.I have spent many hours foraging for a stem long enough and thick enough to make a hazel staff. Once found I strip away the bark immediately and rub them smooth with sand paper. I find this helps to prevent warping. Then hung up by string in a shed the stick is given a liberal application of wood stainer. After a couple of days it is rubbed down again with a fine sand paper before another coat of stainer is applied.

After a further two days or so, I apply a coat of clear varnish, my own preference is a clear yaught varnish which is left to dry for 24 hours, before an additional coat is added. The staff will then be left hanging for at least a week, before the feral is fitted. Staffs made from hazel are strong, light to carry and will last a life time if cared for and kept out of damp wet weather when not in use.

I have always made my own staffs and walking sticks and in icy weather they have saved me from falling on more than one occasion. Older stems become gnarled and twisted and are of little use to the stick maker.

Hazel trees are notoriously difficult to age in the general countryside. The old gnarled and twisted stems die off at about 30-50 years of age, but are soon replaced by vigorous new shoots. Thus the tree gives the impression of youth and freshness yet the original stump may well be hundreds of years old.

BELOW--- young branches of hazel 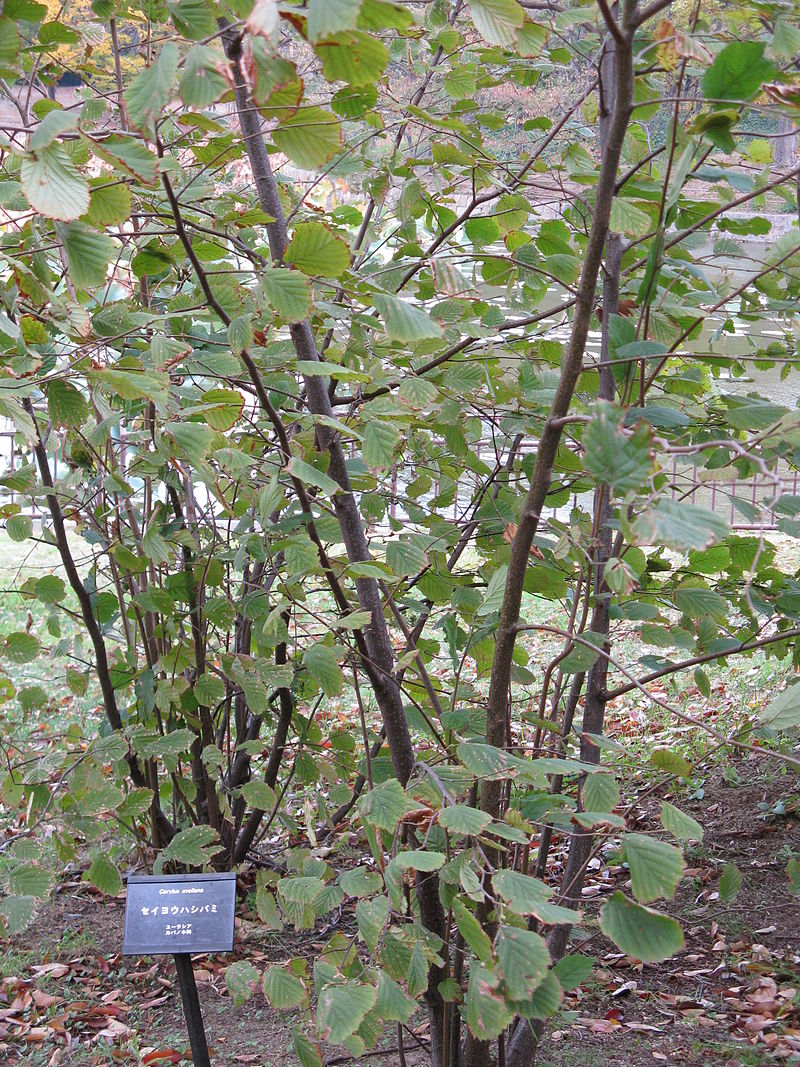 During the autumn the nuts, which often occur in twos and threes appear encased in leafy bracts that have a ragged appearance. When the nuts are still green and reasonably soft they are taken by small mammals and grey squirrels. Red squirrels are unable to digest them until they are ripe. The wood of hazel is also utilised in the making of broom handles, hurdles, poles, charcoal and firewood. The twigs have long been employed in the art of water divining.

BELOW--- Autumn foliage of the hazel--BOTTOM--The green nuts are taken by squirrels and small mammals.

Hazel has not been used as commonly as other arboreal subjects. However, the dried and fresh leaves were said to have a stimulating effect on the circulation. The nutritious nuts contain vitamins A,B, and C, as well as potassium, calcium, phosphorus, magnesium, iron, protein and fatty oil.

The bark was employed in medicinal preparations for its astringent qualities. It was used to staunch the flow of blood.

The common hazel was a salient feature in the hedgerows of lowland England. There are many varieties that have been cultivated for gardens. A good example is the corkscrew hazel Corylus avellena "contorta" it is a small slow growing tree with amazing twisted branches. It makes a distinct feature especially in late winter and early spring when cascading catkins grow from the contorted stems. Another favourite species is Corylus maxima "purpurea" which is grown for its purple foliage.

In the wider countryside hazel is important to the common dormouse indeed the creatures alternative name is hazel dormouse. Several species of butterfly is also associated with the tree.