The harvest mouse belongs to the Family Muridae in the Order Rodentia and placed in the Genus Micromys.

This delightful mouse is more numerous in the southern parts of England. However, it does occur further north and is known to occur in regions of Lancashire and Yorkshire and even in Edinburgh Scotland.

It was not until the 18th century that it was recognised as a species in its own right. The famous naturalist Gilbert White discovered the mouse around his home of Selbourne in Hampshire {Southern England} and once people started to look for it, the species was discovered to be quite wide spread.

With the exception of the Lesser Shrew, the harvest mouse is the smallest of British mammals and by far the smallest rodent to occur in Britain.

The harvest mouse will always be associated with Gilbert White, in his letters to Pennant he described the species. Its appearance and habits were published by Pennant in his " British Zoology".

Description of the harvest mouse

This pretty little creature has found favour, even with those who dislike other mice. The head and body length measures less than two inches [5cm} and the nearly naked, scaly tail is almost as long again.

This mouse has a blunt nose and small, hairy vole-like ears which is in contrast to other British species of mice. The eyes are bright and black. Their hearing is acute and although their vision is not so good they will react to a change in light movement.

The thick soft fur is reddish brown on the upper parts and the under parts are white with the two colours being sharply separated. During the winter the coat looses its warm colours and becomes darker.

The tail is exceedingly pliant and the part near the tip is prehensile and serves as an additional limb, which it wraps around any suitable object within reach. This allows the creature to have full use of both front feet for extra stability while feeding.

The young are greyer than the adults.

Corn fields such as this are the summer residence of many harvest mice.

The usual habitats of the harvest mouse are pastures and corn fields, where it climbs the stems of tall grasses and corn plants, where they gnaw off the ripe ears before carrying them to the ground before picking out the grain.

During the summer it feeds largely upon insects especially aphids and worms. At this season they store grain in their burrows for use between periods of sleep.. However, despite its common name, the nimble harvest mouse makes use of other habitats such as herbage along ditches and untrimmed hedgerows.

Being agile climbers they feed among the stalks of long grasses and reeds, particularly around dusk and dawn. During the autumn and winter they feed on moss, roots and fungi. Because of the lightness of their bodies {between 4-6gms} they feed where heavier creatures can not. Another advantage of feeding among stalks, is that it is a niche habitat where predators are often absent. Should a predator happen along, the mouse will just drop to the ground and disappear in the dense vegetation.

As the vegetation dies down and places of concealment diminish, harvest mice populations are probably at their highest and are taken at this time in large numbers by their many predators. Owl, weasel, domestic cats take many, but unlikely predators such as pheasants and crows, take a surprising number.

Domestic cats are always on the look out for unwary mammals. 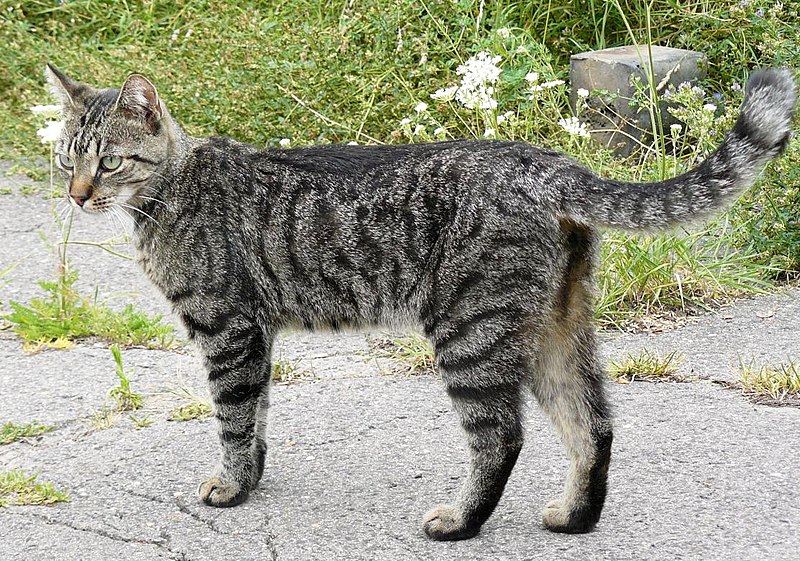 After mating has occurred the mice split up ,the male taking no part in the rearing of his offspring.

In his book "Animal Life of the British Isles" published in 1921 Edward Step states: " This is a balled shaped nest about 3 inches in diameter{ 7 and a half cm}  {about the size of a tennis ball.} They are formed of neatly plaited and woven blades of wheat or grass, with no defined opening, the grass being merely pushed to one side to make entrance or exits when required, and closing again by their own elasticity; there is just sufficient room inside for the mother mouse and her blind naked offspring, whether they number 4,8 or even 9.

The nest is suspended at some little distance-about half a foot from the ground-; several stems being incorporated in its walls to give stability, or it may be lodged between the stem and the leaf of a thistle or a knapweed, in blackthorn or broom.

The bed is made of split leaves of corn or grass; the nests are not always so tough as that described by Gilbert White which  "was so compact and well filled that it would roll across the table without being discomposed, though it contained 8 young" "

two to three litters per year are produced between late May and October or even as late as December if milder conditions prevail. it is thought that most litters are born in August.  The tiny babies are born blind and naked, but grow incredibly quickly, and may well explore outside the nest before they are two weeks old. Indeed they are often abandoned after 16-17 days of age, but they may well continue to use the nest, which is often looking worse for ware at this stage. Cold weather and especially wet, cold weather is another factor in high mortality.

In the days when corn was cut by hand, the nests became evident to the workers in the fields and were often recorded; and there can be no doubt since the advent of the threshing machine, and , later the monster combine harvesters with their whirring, uncompromising blades, untold numbers of nests have been lost.

However, because corn fields are harvested every year a stable population could not become established in this habitat anyway.

Thus many established populations occur among more permanent habitat such as hedgerows, tall, rough grasses, reeds and even thistles.

Large declines occurred between the 1970s and 1990s with the largest losses apparently occurring in the south of England. Extensive farming and loss of habitat such as hedgerows being removed to allow access to the massive machinery  used on farmland in these modern times.

Even long grasses along roadside verges are now regularly cut depriving this nimble mouse of another habitat. Old grassy fields that used to be grazed only occasionally, or were perhaps mown for hay are now very scarce nationally. When such fields were common they held high densities..

Conversely, in many areas the planting and protection of hedgerows and the various arable schemes, such as set-aside and field margin buffer zones should all help towards the creatures plight. harvest mice seldom move far from where they were born and any recolonisation will take a long period of time unless recolonisation occurs with aid from humans reintroducing the mouse to suitable habitat.

The current status places the harvest mouse on the Red list of Conservation Concern, making it a Priority species, and as such, a Species Action Plan under the UK.Biodiversity Action Plan.

The status is due to declines in England and Wales.

The images on this page may be reused However, the name of the relevant author must be attributed along with any accompanying License.