The groundsel belongs to the Asteraceae family of flowering plants, formerly known as the Compositae, in the Order Asterales. The genus name of Senecio derives from Latin and indicates "old man", alluding to the feathery pappus. The specific name of vulgaris means the plant is common.

The name of groundsel is derived from the Anglo-Saxon groundeswelge {ground swallower} alluding to the way the plant spreads.

The genus Senecio includes over 800 species world wide. In Britain there are nine native species, which include-Stinking groundsel, Golden groundsel and the Hoary Groundsel, but by far the commonest and most widespread is the one under review.

Groundsel is a frost resistant plant that delights to grow in almost any situation up to about 500 m above sea level.  They may be encountered on disturbed or cultivated land, waste land, roadsides, gardens, nurseries, landscaped areas, agricultural land and even on walls. 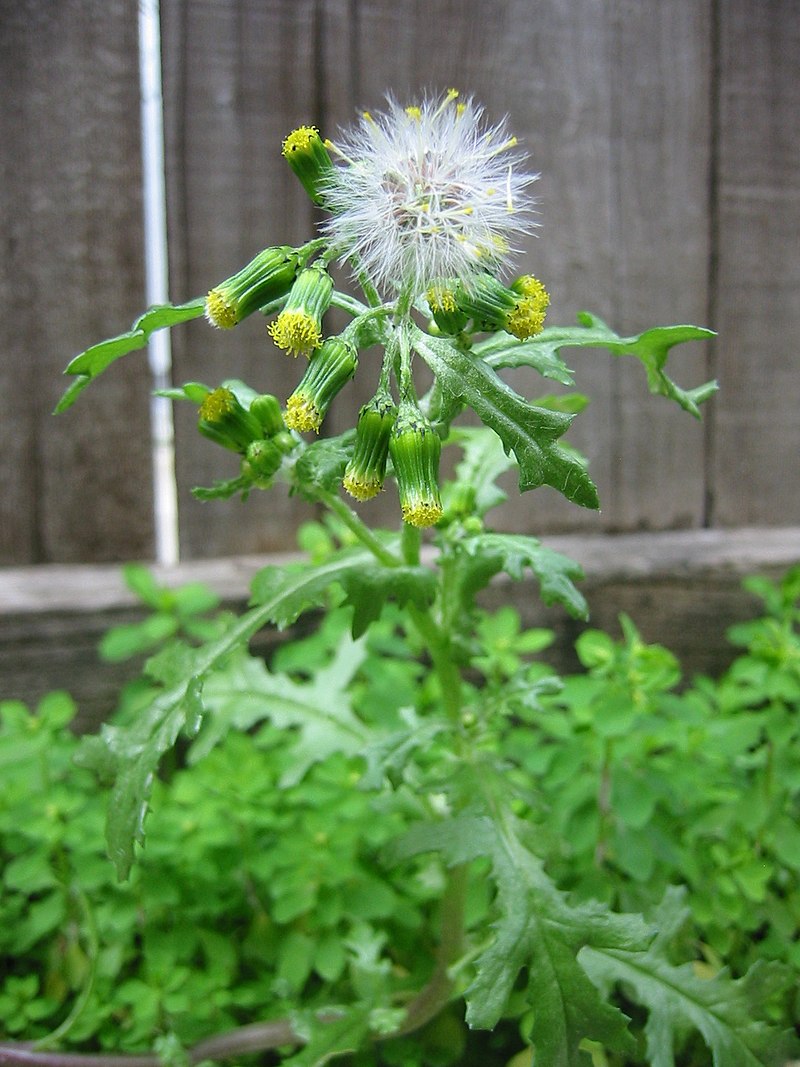 Description of the common groundsel-Senecio vulgaris.

The stems are hollow and succulent, which branch at the tops and from the base. They frequently have a purple hue. They are smooth or with sparce downy hairs. This species is variable in habit and leaf shape. the foliage is arranged alternately along the stem. the leaves have two rounded lobes at the base of the stalk {auriculate} and are sub-clasping above.

The foliage are divided in to lobes. They measure 2.4 inches long and about one inch wide, decreasing in size the higher up the stem they are located. the foliage is sparcely covered with soft, smooth , fine hairs. Lobes typically rounded and somewhat similar to an oak leaf in shape.

The flowers appear in open clusters of 8-10, small, cylindrical shaped {like miniature shaving brushes} flower heads composed of yellow tubular florets,{ray florets are absent], they are 6-13mm long with a conspicuous ring of black-tipped bracts below them, this is a characteristic of many species of the Senecio genus.

In common with many species of the family Asteraceae, the seeds are attached to down {pappus} which forms a globular head. The seeds are carried away by the wind in a parachute fashion.

The seeds are achnes. The plant produces thousands of seeds throughout the season.  The main flowering period is from April until October, but they may be found in flower almost any time of the year. When the downy heads appear in late April or May they give rise to the country title of "old man in spring".

The flowers are self fertilised. From germination to fruiting takes approximately one hundred days. Studies have revealed that in the UK, seeds are capable of germination almost immediately, and 80% can emerge within a few days of shedding.

Components of the common groundsel

Groundsel has lost favour in modern day herbal medicine with the exception of Golden groundsel, which is a much less common species. However, I have included some historical uses which may be of interest to readers.

The Family herbal printed in the 1800s states ; " The juice of the herb is gentle and very good emetic. it causes vomiting without great irritation or pain.it is also good for cataneous foulness applied outwardly"

In his book Adam in Eden or the Paradife of Plants, 14th century  W. Coles states;--"The decoction of groundfell { as Diofcorides faith} being made into wine and drunelpeth the paynes in the stomack proceeding of choler by caufing the difaffected party to vomit, which the juice herof taken in drink, or the decoction of the herbe, in ale with fome currants gently performeth; It is faid to be good like wife againft the jaundice and falling fickneffe being taken in wine. The frefh boiled herb, and made into a pultis, and applyed to the breafts of women that are fwollen with heat and payne, af,alfo to the privy parts of man or woman, the seat of fundament, or the arteries, joyntes and sinrews when they are inflamed or fwollen doth much eafe them"

It was formerly much used as a poultice and regarded as being good for sickness of the stomach. A weak infusion of the plant  was given as a purgative, and a strong infusion as an emetic. It was said to cause no pain or irritation and removed bilious problems.

Culpeper {16th century}  states in his herbal;" The herb is safe and friendly to the body of man, yet causes vomiting if the stomach be afflicted, if not purging, it doth with great gentleness than can be expected;

Taken in ale, it acts against paines of the stomach, stranguary, and jaundice; it destroys worms and is useful in scrofulous tumours and inflammations of the breast and scald head.

The leaves bruised and applied, produces the like effect, and there is no better application for the gripes and cholic of infants"

Common groundsel a relative of the ragwort, contains similar toxic properties; when consumed by livestock in large quantities a build up occurs over time that does great harm to their liver, and the alkaloids responsible are not destroyed by drying or by fermentation in silage.

The cinnabar moth caterpillar which feeds on ragwort also feeds on this species with no ill effects. The toxin that builds up in the caterpillars body prevents predators from eating them with the exception of the cuckoo.

The seeds have long been fed to canaries which eat them with relish.

Images on this page may be reused. However the name of the author must be attributed along with any relevant license.

ASSOCIATED PAGES--Click on the content banners at the top of this page . Scroll down to view.

All other species of flora that occur on this site can be viewed by clicking on the relevant content banners. { they are all grouped together}

Flora via Links. Click on the the links banner at the top of this page. Scroll down to relevant box. Click this is a direct link to the article. Includes the series Past and Present Medicinal Uses.