Fools parsley belongs to the Apiaceae, formerly the Umbelliferae family of plants. It is placed in the Genus Aethusa and given the specific name of cynopium. It has naturalized in the Northern United States and Southern Canada.

As its common name suggests the plant is toxic and only a fool would eat it. Should one {whether a fool or otherwise}, eat this plant in mistake for one of the harmless members of this group, such as parsley, fennel, celery, carroway, etc etc, one would soon be aware of the following symptoms, heat in the mouth and throat and these are just the start of some very unappealing symptoms which follow. { See poisonous effects below}.

it is a common weed not only of the general countryside but also of cultivated land. It should never be used for home made medicinal or culinary preparations.

To add to the confusion over identification there is also confusion over the common name which is sometimes applied to other species in certain regions. For an example the name Fools parsley is applied to the related Hemlock Conium maculatum in some parts of the United States.. However, in Herbals and Wild flower books always look for this species under its Latin name of Aethusa cynapium which is universal and only given to this one particular species, throughout the world.

To aid the identification of this species I turn to the 'British Flora Medica' {1858--Not in Copyright} which gives a detailed description.

It states-- the root is annual, slender, tapering, nearly white with several creeping, filiform fibrils. The stem is erect from 12-18 inches {30-50cm} high, branched leafy, smooth, cylindrical, obscurely striated {striped}, shining, livid green, with a dull purplish hue at the base. { Not purple blotches like those that occur on the stem of hemlock.}. The flowering stems are deeply and acutely furrowed.The leaves are uniform, bipinnate, the lower most are tripinnate, glabrous {without hair-smooth}, lurid green. The leaflets decurrent,  rhomboide-lanceolate, lobed, and cut,rather obtuse, but with a short mucro {short pointed projection} at the point. Petiole {of the whole leaf }  furrowed, slender, sheathing at the base where it joins the stem.

The flowers are disposed in terminal umbels of 8-15, nearly equal radii, spreading or slightly incurved, the umbellues  {smaller umbels that make up the whole umbel flower head} small and distant.  There is no general involucre [ A ring of bracts at the base of the flower head}, but a partial one of three unilateral, exterior linear-suulate drooping bracts. Note before the flowers expand, these bracts are generally found spreading horizontally, when the plant is in flower they are quite pendant { this is the best time to recognise this species from others } when in fruit  tending inwards.

The petals of the individual small flowers are white, obcordate {heart shaped but attached at the pointed end}, nearly equal, emarginate { having a notched tip or edge} with an inflexed point. the outer most are somewhat radiant. The stamens are about as long as the petals, spreading between them, with thread shaped filaments tipped with roundish anthers.

The fruit {seed capsule} is yellowish brown, ovate, somewhat globose, of two carpels, which are marked with five acute ridges, of which the lateral ones are marginal and a later broader, and bordered by a somewhat winged keel; each contain  an ovate plano {indicating fatness}-convex, brown seed.

The plant is frequent in fields and gardens in this country and throughout the whole of Europe. It flowers from July until September.

Flower head is an umbel of white flowers.

this plant has scarcely any smell in its recent state, but when bruised it exhales a nauseous odor resembling garlic or the plant known as Garlic Treacle Mustard Erysimum allaria. The root has no particular taste. The fresh leaves somewhat resemble parsley in flavour, but are destitute of the peculiar aroma of that herb. Dried they have a nauseous bitterish taste, their acridity having disappeared.

The fruit has all the properties of the herbaceous parts in a higher degree, and when chewed manifests a slight pungency in the gullet and stomach. Alcohol appears the best menstruum  for the virtues of this plant. Professor Ficinus , of Dresden, has discovered in it a new alkaloid to which he has given the name Cynapin or Cynapia { hence the scientific name}. It is crystallizable and soluable in alcohol and water, but not in Ether. The crystals are in the form of a rhombic prism, which is also that of the crystals of the sulphate.

There are several cases on record of the effects of this plant on the human body, which, if not exaggerated, prove to be of a very deleterious nature. ' two ladies of Castle Donnington Leicestershire { South of the Midlands England} partook of some salad wherein Aethusa cynapium had been put by mistake for common parsley, with which it had been grown, and was gathered. Symptoms of an alarming kind soon followed, indicative of the full operation of that pernicious vegetable. They were troublesome nausea, with oppressive headache and giddiness, also a strong propensity to slumber, at the same time that calm repose was wholly prevented by frequent startings and excessive agitations. the mouth, throat and stomach were impressed with the sensation of pungent heat,attended with great difficulty in swallowing.

Increased thirst prevailed, with total loss of appetite for every kind of solid ailment. The extremities felt benumbed and were affected by tremors, and all the vital and animal functions were performed with unusual inactivity.  The ladies ultimately recovered.

A six year old boy, having eaten, at four o' clock in the afternoon, of this herb, which he mistook for parsley, soon uttered cries of distress, and complained of cramps in the stomach. before his father had conveyed from the field, his whole body was much swollen and assumed a livid tint. His breathing was short and very difficult, and he died about midnight.

Another boy, four years old, who was poisoned in the same manner was fortunately seized with vomiting, but this did not prevent the access of delirium. His life was saved, however, though the physician did not arrive until next morning"  { Medical Journal, Vol xiv}.

A young man ate a handful of fools parsley, with nearly the same quantity of lettuce, about one o' clock on  Thursday. In about ten minutes he was affected with pain and hardness in his stomach and bowels, attended with rumbling. He walked off, but was seized with such lanquor, weariness and pain that he scarcely managed to get home. Giddiness and confusion ensued. At seven o' clock he took an emetic, this considerably relieved him from the uneasy sensations in the bowels, but the other symptoms continued, and he passed a restless night.

Next day he had much pain in his head and eyes which last was inflamed and bloodshot, and transient painful circumscribed swellings of the face.  on Saturday his eyes were painful, and entirely closed by surrounding inflammation; he was much relived by bleeding. The symptoms were not fully removed for two to three subsequent days, but he eventually recovered. {Churchill's Medical botany}.

Dr. Buckhave-mentions several cases in which fools parsley was given inadvertently for hemlock and produced unpleasant symptoms, besides frustrating the purpose for which the conium {extraction from Hemlock} was ordered. hence it appears that fools parsley acts as a narcotic acrid poison, and the symptoms may be summed up heat in the throat,thirst, vomiting, occasional runs of the bowels, short and difficult respiration, pulse small and delirium.

Fools parsley is very similar in appearance to many other members of the family. These are the flowers of Cow parsley 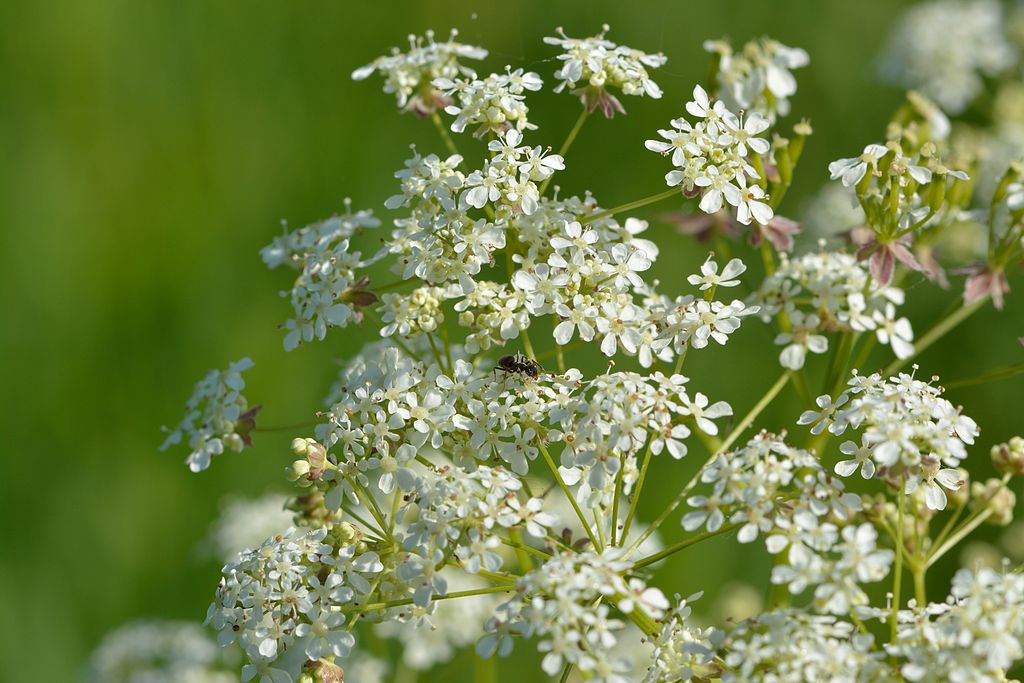 Treatment and medicinal uses--The following is for historical interest only and should not be thought of as a way to cure poisoning from this plant. Medical help should be sought if you think that you or any one is suffering from fools parsley poisoning.

In days gone by the treatment given for fools parsley poisoning was ---" the first thing to be done in cases of poisoning by this plant is to administer an emetic. If it has been swallowed but a short time, two to three grains of emetic tartar or from 20-24 grains of ipecacuantia dissolved in a small quantity of water is suitable; of the throat may be tickled with a feather.

If the poisoning has been sometime in the stomach and spontaneous vomiting has not occurred, an emetic combined with a purgative such as Epsom salts, may be given, and purgative lavements may be exhibited.  If symptoms of cerebral congestion appear, blood should be taken from the jugular vein; Subsequently, when the poison is evacuated, acidulated drinks should be given, and chiefly water sharpened with vinegar, in small doses, frequently repeated.

When the narcotic effects are abated the acidulous drinks should give place to mucilaginous infusions or decoctions, as in the infusions of mallows or violets, or almond emulsions. In cases mentioned by Wittke, of two children in whom there was complete insensibility, dilated insensible pupils, and staring eyes, and in one of them frequent convulsions, the treatment consisted of the administration of milk, sinapisms to the legs and sponging with cold vinegar.

Medicinal properties----few of the ancient writers attribute any medicinal virtues to this plant, some of them, however, mention its resolvent and sedative  effects when applied externally. It has in many cases given, designedly or inadvertently , as substitute for hemlock and has produced some untoward symptoms. nevertheless, we  imagine that a plant endued with such peculiar and vigorous sensible qualities, may one day become a useful remedy in the hands of physicians . to this end experiments are necessary to ascertain more fully its properties, the doses in which it may be administered, and the indications it is calculated to fulfil.

Flora via Links. Click on the Links banner at the top of this page. Scroll down to relevant box, this is a direct link to the article{s}. Includes the series Past and Present Medicinal Uses.