Fallow deer belong to the Order Artiodactyle and the family Cervidae. They are placed in the genus Dama formerly Cervus.

Fallow deer are at once distinguished from the red deer by the entirely different character of the antlers. Those of the fallow deer are flattened and expanded in all branches of the upper part, though the main stem or beam is rounded as in the red deer. With the exception of the equivalent brow antler and bez tine the antler forms a broad curved plate whose margins run out in a number of flat points. It is known as the palmate antler. these horns are shed annually, like those of the red deer, but slightly later. There are no canine teeth in either sex.

Description of the fallow deer

The fallow deer is smaller than the red deer, the buck standing only a little more than three feet high at the shoulders , and the hind somewhat less. It differs in colour, being a much paler red or reddish, above and spotted with white, and yellowish white on the under parts. The tail is longer than that of the red deer and kept constantly in motion from side to side.

The vertical white stripe on either side of the rump shows up strongly when the animal is in retreat.  In winter the fur darkens, and some of the tame deer in parks show this dark colouration at all seasons. this has been explained that they are descendants from a darker race introduced from Norway by James the first, but records show that this variety was in Windsor park as far back as the year 1465. The dark form was met with in Epping forest and was also seen in Richmond Park, where however, the light form was in the majority.

In this connection it must be mentioned that it is believed by many that the Romans introduced the fallow deer to this country. Fossil records show that it was a true native here originally and that the Romans may well have reintroduced them. However, one is inclined to be somewhat suspicious of these introductions attributed to the Romans. It is quite possible that in their desire to enjoy all their continental luxuries they may have brought with them much that was indigenous to the soil. It is possible too, that they were more proficient as conquerors  than observers of nature.

Ceaser for example, has left it on record that, when he hewed his way through the dense forests between the south coast and London, there was no beech trees growing, whereas every Botanist that has devoted attention to the origin and distribution of flora is convinced that the invasion of southern England by Beech woods of the Continent took place well before Ceaser was born, and before the separating English Channel was more than a river valley. men who could overlook so majestic and plentiful  a tree as the beech on our chalk-lands were equally capable of not seeing the shy fallow deer, which has a wonderful power of vanishing silently among the bracken.

However, there was a general opinion in the 1800's that the fallow deer was only native to the warmer regions of Europe and Asia Minor, elsewhere it has been introduced by man. 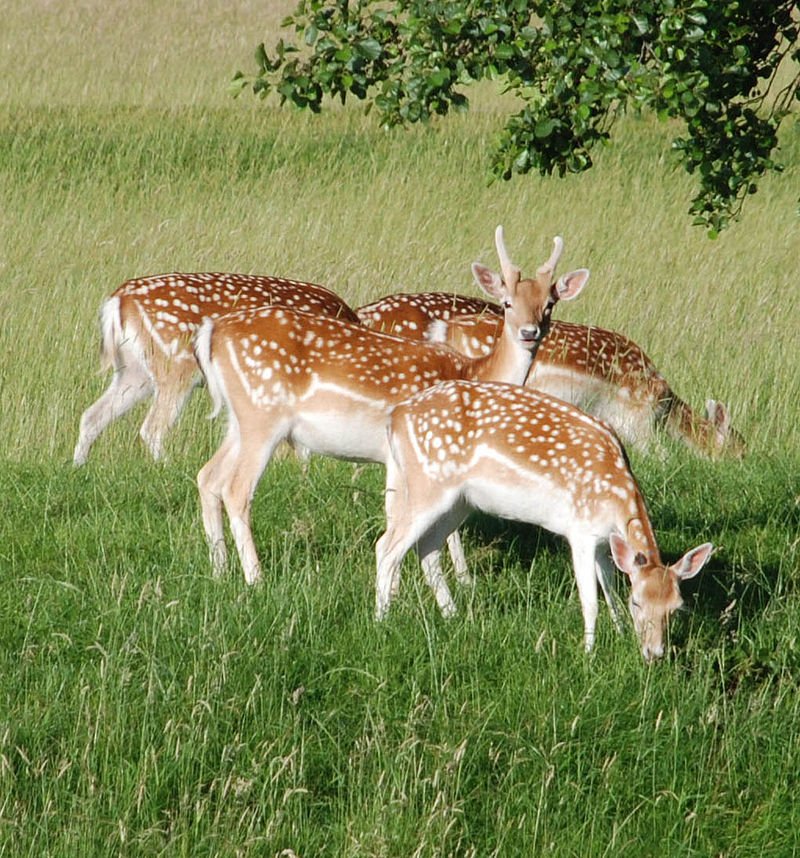 In addition to the marked differences in the antlers in these two species of deer, there is also a distinction in the development of them. During the first year the fallow fawns give no sign of such a growth, but in the second year it produces a pair of short unbranched horns/prongs which give the fawn its name of 'pricket' {see picture above}.

The next year there is a great deal  more growth, for each simple prong is succeeded by a horn that bears two forward tines, and the extremities of the beam is slightly expanded and flattened, and its margin indented. In the fourth year the form is very similar but more developed, the flat portion of the beam being much larger and its outer margin more regularly toothed or snagged. The 5th year shows further growth along the same lines, and the animal became knoen as ' buck of the first head'. In later years the additions are merely an increase in the number of 'spillars' or' snags' to the flattened beam.

During the breeding season and throughout the winter fallow deer may be encountered in mixed herds of both sexes. At other times in parties of bucks or does. Like the red deer it is not much appreciated by the forester. During winter time they are not content with browsing on the young shoots of the trees, but damage or even kill trees by destroying the bark. they also eat acorns, chestnuts and horse chestnuts. By reason of their feeding more in lowland woodlands, where the diet is more liberal, the venison of the fallow deer is considered to be more tender and of a finer flavour. 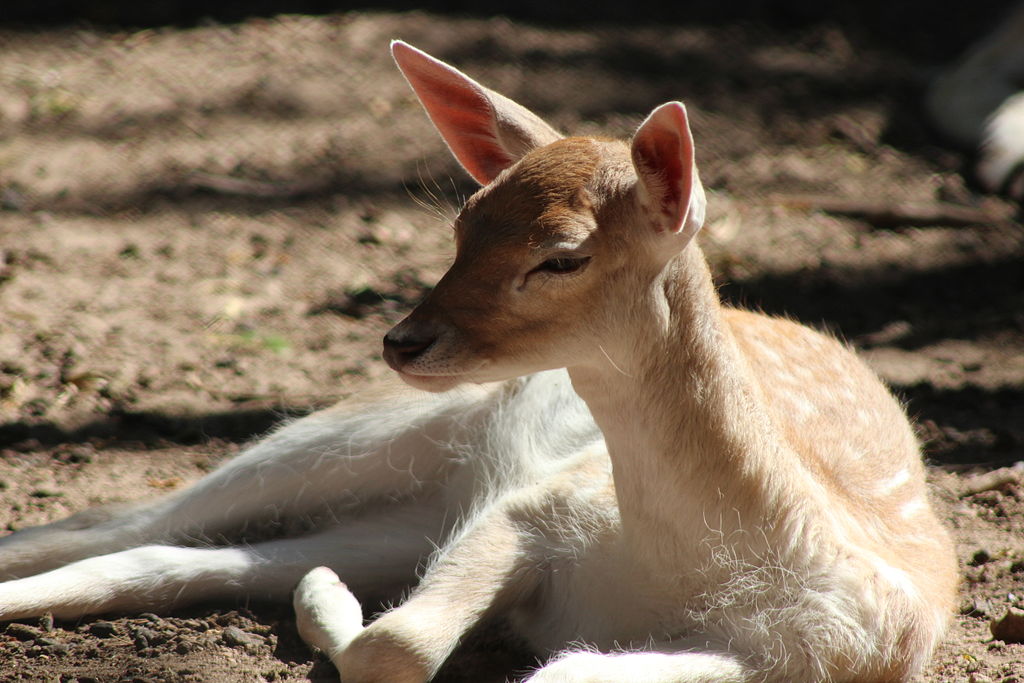 The fallow fawns are born in May or June in a close retreat far among the bracken. generally there is only one at birth but two are not uncommon, more rarely three may be produced by the mother. The fawn is capable of looking after itself when only a few hours old.

A good illustration of this point is given by Mr. John Watson,1800s, who was a known and respected writer on the wildlife of Westmorland {Cumbria} he wrote- " Once we came suddenly upon a pretty little soft eyed creature, evidently only a few hours old. It squatted closely as we stood over it, but when aware it was being observed, feigned death in the most amusing manner, only with the softest most wide open eyes imaginable. As we stooped towards it, with half a dozen bounds it cleared the brake, and as a rapid stream stopped its further progress it jumped in, and after swimming twenty yards came quickly ashore. It then trotted back to its bed among the ferns, and yet it is probable that this fawn had not previously used its legs and had certainly never seen water"

The gestation period is about eight months. She becomes fertile in the second year and ceases to be at around 15 years of age.

Basic history of the fallow deer

The source of the following information is taken from the book Cyclopedia of Natural History 1857.

In the south of Europe it grows to a larger size than it does with us,which is the reason it was thought that they were native;but the point is still disputed. and it may have been an importation from the west of Asia. In the central countries of Europe, wild ones were few and there was none known to the north of the Carpathian mountains. But in all parts of Europe, where there was extensive parks there was fallow deer in a state of semi-domestication. Where there was cover in the neighbourhood they often escaped in such numbers as to become an annoyance to farmers.

During the 19th century the flesh of the fallow was though to be more delicate and juicy than that of either of the wild sorts in this country and as a consequence it was in high request as a luxury. The animals themselves, though destitute of the grandeur of the stag {red deer} and the gracefulness of the Roebuck are very ornamental in parks, and when undisturbed they are very tame and gentle throughout the greater part of the year and not so nearly as formidable in the rutting season as Stags of the red deer. The sound of the voice is low compared with that of others and was referred to as 'groaning'.

The  name fallow is from the Anglo Saxon fealwe, and indicates the colour of the lighter race. gray in 1843 separated the species from the Linnean genus of Cervus and placed in its current genus of Dama

The images on this page may be reused. However, the name of the relevant author must be attributed along with the accompanying license.