Holm oaks belong to the evergreen section of  the genus Quercus, and the family Fagaceae {Beech family}. It is often referred to as the evergreen oak or holly oak. Holm is the old English word for Holly, in this instance it refers to the holly like foliage.

The holm oak, is the only one of the evergreen section of Quercus that has been cultivated { in the UK } to any extent, or indeed that will grow well throughout the greater part of the United KIngdom. Some of the other species do indeed grow well in the south of England and in Ireland, in warm and sheltered situations, but they are to tender to survive in ordinary situations, and even less so in the north of Britain where the winters are hard, long and cold.

Even Quercus ilex is sometimes affected by severe winters when the foliage may be lost. records show that the severe winters of  1837-38 proved very destructive to evergreens of this genus in the UK. the tree is native to Italy, Spain and the south of France, but it also extends irs range into northern Africa and some parts of Asia. it is a species which does not grow in large forest like accumalations and is more often found as a single tree or in small groups.  It does seem to grow well near to the sea both in its native habitat and here in Britain, than it does further inland or at least with more vigour in these situations.

Foliage of the holm oak

It is a tree of extraordinary duration, and, though its increase after a certain period is slow, it remains in a growing state for many centuries. Pliny, in his memoranda of the Ilex, makes a mention of some trees growing in his time, of a greater age than Rome itself. Its first introduction to England appears to be about the middle of the 16th century as it is mentioned by John Gerard. And Evelyn in 1678, speaks of an Ilex growing in the King's privy garden at Whitehall, as " a sickly imp of more than four score years growth" Since that period, as a desirable evergreen tree. It has been generally planted in parks and gardens and pleasure grounds ever since that time. In many instances it attains the size of a medium sized tree.

According to the book 'A History of British Forest Trees' {1842]- " The home oak thrives best in deep dry soil though it makes good progress in a stiffish loam provided that it not be wet bottomed, which is always injurious to its large deep descending roots. it is entirely propagated by acorns, which are procured from abroad, or, in fine seasons from trees in our country, and the plants either raised in beds or in the open air, or in pots. We recommend the latter method, as the young trees suffer no mutilation of the roots, and can at any time be turned out with certainty of success, whereas, when raised in the open ground, they are from the nature of their large, naked, carrot-like roots, very difficult to transplant, unless great care is taken to move then frequently in the nursery, and thus force them to throw out lateral rootlets."

" Some years ago, we succeeded with scarcely a loss of a plant in transplanting a number of Holm oaks raised from English grown acorns. this was afected by nursing them in a stiff loam, and checking the downward duration of the roots by moving them every other year till finally transplanted"

Acorns of the Holm oak

Description of the holm oak

When left to its natural growth the tree is like some immense shrub with branches growing from the very bottom, however, with the aid of a pruner ans a little skill the trunk can be encouraged to grow straight and tall. The foliage of the holm oak is a deep glossy green. The leaves themselves can vary in form with some being large and broad with toothed margins in others they are prickly like those of the holly and in others they are narrow and simple with no toothed margins {such as those in the images above}.

In days gone by, this variety of leaf form led to some botanists thinking that there were several varieties of the species.

The catkins of the male flowers, which spring from the axils of the leaves of the preceding year, near to the extremity of the branches, are about one and a half inches long [3.75cm}. the calyx is bell shaped, the stamens six with filaments twice the length of the divisions of the calyx. The female catkins from 4-8 in number, are sessile borne upon a common peduncle , which arise from from the axils of the leaves of the same year, and the acorns are not ripe until the autumn of the second year. These vary greatly in form and size upon different trees, and the cup is closely imbricated with small scales. The acorns of the holm oak are generally harsh and bitter and not edible.

According to the book 'British Grown Timber Trees' --"The holm oak is greatly valued as a shelter tree and this is particularly so in seaside situations. The timber of fully matured trees is remakably hard and close grained, richly coloured and takes polish well. It lasts well, as a number of uses to which the the timber of trees that were uprooted on the night of the Royal Charter was wrecked on the coast of Angelsey {north Wales} bear witness. At Penrhyn Castle, in Wales, the wood has stood the test of time in a considerable way, especially when used for doors, though fencing posts and boarding cut from thoroughly matured wood have also given every satisfaction. the price of the timber is not fixed, but, for several wind fallen trees twelve shillings and six pence per foot was obtained."

Catkins of the holm oak

Trunk of the holm oak 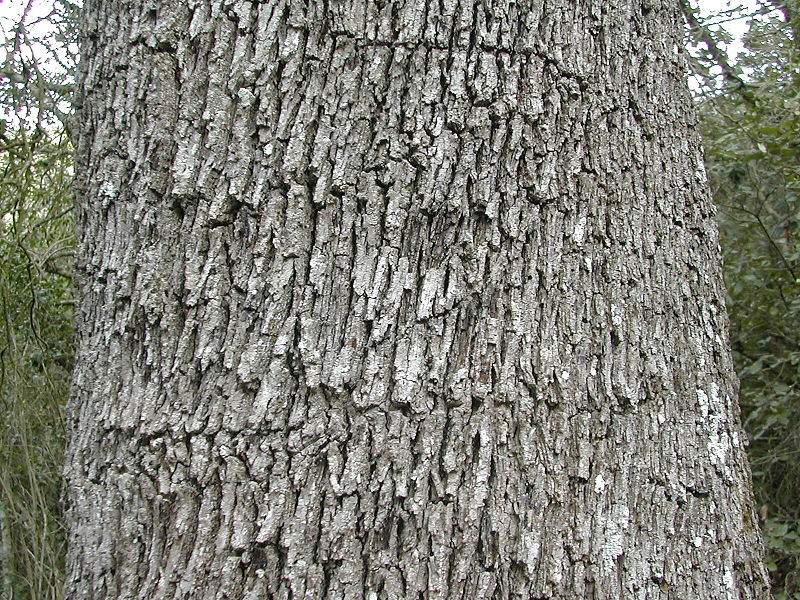 The images on this page may be reused. However, the name of the relevant author must be attributed along with accompanying license.