Hedgehogs belong to the family Erinaceidae of the Order Erinaceomorpha and placed in the genus Erinaceus. They are found through parts of Europe, Asia, Africa and by way of introduction New Zealand.

Hedgehogs of which there are 17 species throughout the world are placed in five genera. here we review the European hedgehog Erinaceus europaeus which is Britain's only spiny mammal.

The name "hedgehog" came into use around the year 1450 and is derived from the Middle Englaish heyghoge from heyg or hegge meaning hedge because it frequents hedgerows { among other habitat} and the word hogge meaning hog from its pig like snout and the grunting noises the animal makes while foraging. they are also referred to as urchin, hedgepig and furse pig.

The general characters of hedgehogs are----

The cutting teeth are slender and sharp edged or emarginated. The cannines are weak and shorter than the cutting teeth, so as to be distinguishable from the false grinders. The snout is elongated and pointed terminating in a cartilage, with an indented appendage on the external margin of the nostrils. the body is contracted and covered by sharp spines inter-mixed with hairs. The legs are short and furnished with five claws each armed with digging claws.

The body is capable of  of being rolled into a tight ball at the will of the animal, when the body is rolled up the spines stand out in all directions. The forelegs have clavicles, so they have a cross motion.

these animals are generally of a small size, and obscure, and timid in habit. Their principle food is worms, the larvae of insects, snails, slugs, crickets and beetles. They will also feed with relish on carrion and thus rid the countryside and gardens of noxious substances as well as destroying vast numbers of insects that damaging to plants and vegetables, so it is evident that they do the gardener a great service.

In general hedgehogs remain quiet under hedges and in other places of concealment. hedgehogs get exceedingly fat towards the beginning of winter before hibernation occurs. A large portion of this fat collects around the muscular disc that is the main organ by means of which these animals roll themselves into a ball.

Nature, in her wisdom, has bestowed this disc on the hedgehog and it is the most important muscle in the whole of its body. A hedgehog can not defend itself against even the most feeble of enemies by active or aggressive means, neither can it escape by running.therefore, its only defence is to present its bristling armour of spines towards its enemies, and unless it is put in to water, it can remain in this position for a considerable amount of time.

Description of the European Hedgehog.

Hedgehogs weigh up to 2 kg and are at their heaviest in late autumn just before hibernation commences.Most hedgehogs die within the first year; in captivity they may live for ten years or more, the typical lifespan of the hedgehog in the wild is thought to be 2-3 years.

The common  or European hedgehog is about 10 inches in length, including the tail which is not an inch long and wholly concealed by the spines. The nose is dusky black scattered over by a few hairs and shaped like the nose of a pig, and, like that nose is adapted for rooting or turning up ground.

All upper parts of the body and the sides are closely covered with strong spines of about an inch  {two and a half cm} , in length, very sharp at the tips. The lower part of the spines are white, the middle black and the tips white { also see breeding and young} The whole covering of the hedgehogs is not only spines, for under them is a close  and curly fur.

It seems that insects have taken their revenge on the hedgehog for killing so many of their race, fleas and ticks live on them and it seems they have no way of getting rid of them.

The muzzle, the eyes and the underside of the feet are. however, always naked, as are the teats of the female of which there are five pairs.  The sense of smell appears to  be acute, for they keep constantly turning up their noses, moving the cartilaginous appendage and apparently sniffing the wind in the manner of a pig.

Hedgehogs are nocturnal, they reside chiefly in woods, fields and gardens affecting the roots and decayed trunks of trees, fissures of rocks and heaps of stones and rubbish that have gathered in the countryside. During the winter they retire into holes for hibernation where they wrap themselves up in leaves and moss. Contrary to popular belief hedgehogs do not store food to use during the coldest months.  During the hours of daylight hedgehogs do not venture out unless by some accident, for during that period they will remain concealed resting in holes among the roots of bushes, under leaves, or in grass, or other tall herbage which affords them some security.While resting they are always rolled up in their protective ball. Hedgehogs can also climb and swim.

Towards the end of spring { and as late as September } the female will give birth to a littler of babies numbering 3-7, these babies are referred to as " Hoglets". Under favourable conditions hedgehogs may produce two litters per season.

The female will stay with her litter for the first twenty four hours after they are born, then she will begin to forage while the hoglets cuddle together for warmth { the male takes no part in the rearing of the young}.

Studies have revealed that when a hoglet is separated from its mother, it emits a high pitched piping call that stimulates the mother to retrieve it. The milk produced by the mother is just over 10% fat and around 7.5% protein. This is a much larger amount than that found in cows milk.

Soon after the babies are born the spines emerge, these are referred to as "first generation spines", these are white and appear in two distinct tracts with a partition between them. These first generation spines are not soft as many people believe, but are sharp and bristly. If the hoglet is disturbed by a potential predator the hoglet will call and snort while arching its back to jab the intruder with their spines, for they are not yet capable of rolling into a defensive ball.

Hoglets are capable of rolling into their protective ball at between three and four weeks old. At around this time they join their mothers on foraging forays.Thus commences the trial of gaining sufficient weight to survive their first winter. Young hedgehogs need to be at least 450g {1lb} to survive.

Hibernation usually begins about November and ends around Easter time, however, this is dependent to a great extent on the weather. Hedgehogs may wake up many times during the winter and will often move to make a new nest. During the spring hedgehogs will become active, but return to hibernation should any cold snaps occur. The nest used during the hibernation period is referred to as a hibernaculum.

Hedgehogs travel about 1-2km per night, males more so than the females. They return to the same day time nest for a few days, then they will use another, then perhaps returning to the old one again. 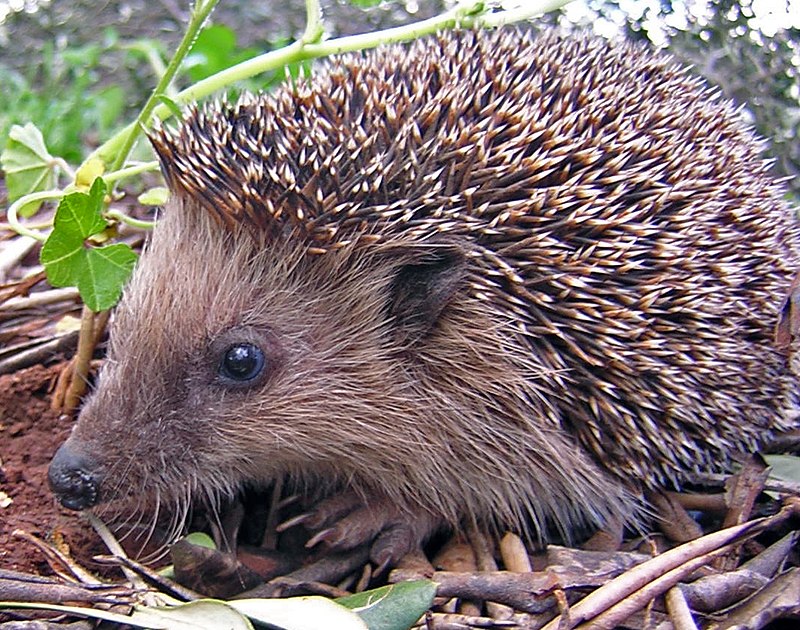 Hedgehogs are partially protected under the Wildlife and Countryside Act 1981, and may not be trapped without a special license from Natural England, The Countryside Council for Wales or Scottish Natural Heritage.

Hedgehogs may become locally scarce or even disappear, but according to the Mammal Society, National extinction is very unlikely. However, they do state, that hedgehogs appear to be in decline. The total population is not known.

The biggest threat to hedgehogs is probably habitat loss, with the change from pastoral farming to arable crops over the last thirty years.The use of chemicals in gardens and for extensive farming kills the creatures hedgehogs need for food and may also poison them directly. In gardens they suffer from secondary poisoning by eating slugs that have themselves eaten slug pellets. many are also killed on the roads with the increase in road traffic over the last few decades.

The countryside would be a poorer place without these beautiful creatures. 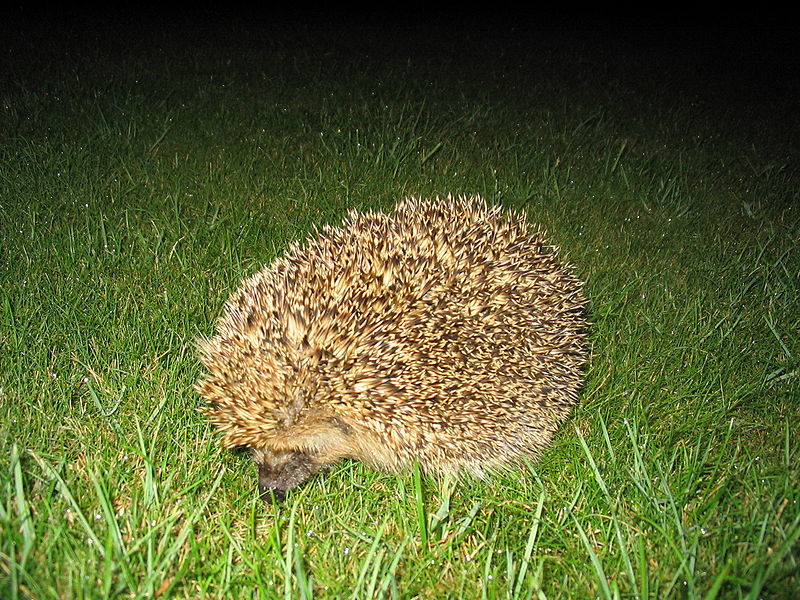 It is always good to read historical perspectives on how the creatures we know today and how they were seen over a century ago. In the case of the hedgehog, they were much more plentiful at that time, than in the predicament they now find themselves.  The Book by Percival Westell, was published in the early 1900s  and is not in copyright.

" Owing to its nocturnal habits, the hedgehog is not as well known as its plentiful distribution warrants, but when it is discovered it is sure to arouse the curiosity of the casual observer, to whom it is only known by sight. So far as we are aware, this ancient animal does not posses a natural enemy, as its prickly armour of spines so ably protects it.and it has not been necessary for it to change its attire all through the ages that have come and gone from the far away Miocene times. True enough, the game-preserver, detests, and makes war upon it because of its fondness for the eggs of Pheasant and Partridge, but, with this exception, the hedgepig, as it is also called, as little to fear."

" It runs with adroitness, is very intelligent, rolls into a ball at the first sign of danger, and, what is of great interest, it is a splendid swimmer. As well as being a good runner and swimmer, it is also a capitol adept at climbing, and because of this it is difficult to prevent a tame hedgehog, escaping from even a high-walled garden. It mostly hides by day revelling in a leaf strewn  hedge bottom,copse or wood, setting out on its nocturnal wanderings as soon as the sun goes down. Its diet consists of slugs,snails,insects, worms,frogs, toads, and, it is said, even young birds."

" The general form is so well known that detailed particulars are unnecessary,  but the shortness of the legs, the profusion of hair on the under parts of its body, and the bright, black eyes, are worthy of mention. During the early days of summer, the female produces her young,the nest being placed at the foot of a tree,as well as in woods,hedges and even barns and out-buildings. They number from two to four, bearing, during infancy, soft, white spines. These soon harden into the prickly appendages known to all those that have endeavoured to fondle such an armoured baby. The Young are blind at birth, resembling in this respect most other creatures { including birds}, that are born in a nest."

" In winter the hedgehog lays up in a torpid state, quietly sleeping until the call of Spring bids its awakening. The number of dead specimens that are to be found in the early days of a new year, tempts us to suggest , that in some seasons, there is a certain mortality among them, due perchance, to an unexpected awakening, and consequent lack of food. It is an inveterate enemy of snakes, and even the poisonous adder, or viper, is no match for this interesting creature when the hedgehog has declared a state of war between the two, and no armistice will be recognised."

Hedgehog – Current estimated population of 522,000 is 66% lower than estimated in the previous comprehensive review in 1995. Hedgehogs are struggling because the insects they prey upon are declining from changes in agricultural practice and pesticide use, human influence through road accidents and loss of nesting habitat. They may also face increased threats from badgers whose population has doubled in the same period to around 562,000.

The images on this page can be reused. However, the name of the relevant author must be attributed along with any accompanying license.