Daisies belong to the Asteraceae family of plants formerly the Compositae and the Order Asterales. The common daisy also referred to as the English Daisy, bruisewort, bairnwort and barinwort is placed in the genus Bellis and given the specific name of perennis alluding to the perennial rootstock.

The genus name Bellis derives from one of several possible sources. The three sources that are generally accepted as being the most likely candidates are --

1} From the Latin  bellus meaning pretty an apt name for this pretty plant.

2} Named after a Dryad- Bellidis {mythology}, or from

3} after bellum meaning war, as it was once used on battlefields to treat wounds.

The name daisy is a corruption of days eye alluding to the flowers opening during the daylight hours and closing during the hours of darkness {or on really dull days} .

The plant is familiar to most of the general populace and is a children's favourite flower. How many children, even in these days of electronic gadgets, have not made a daisy chain? They are a familiar plant found in a variety of situations including well mown garden lawns. Daisies only need a glimpse of the sun to encourage them to open their cheerful flowers at all most any time of the year. They occur in most parts of Britain and Ireland. Of course when a plant occurs on well manicured lawns they are classed as troublesome weeds. This is a pity for this little plant has many useful attributes as we shall see later in the text.

However, whether is it called a weed or a wild flower, a roadside verge or meadow adorned with these pretty little flowers present an amazing sight. So much so that they have inspired poets for centuries. In her book published in 1858 weeds and Wild Flowers, Lady Caroline Wilkinson wrote from a poem by the eastern poet Abu Nawas---

"Behold the gardens of the earth, and consider the emblems of those things which divine power has formed; eyes of silver {daisies} everywhere  disclosed with pupils like molten gold, united to an emerald stalk; those avouch that there is no equal to God"

Fletcher, says of them---

" Daisies smelless, but most quaint"  and Sutton---

" A gold and silver cup

upon a pillar green

earth holds her daisy up, to catch the sunshine in"

Bruisewort, and other country names

The old name of bruisewort relates to the use of the plant for bruises and all kinds of pains and aches, which as Gerard {16th century herbalist} tells us it -" doth mitigate,besides curing fevers, in inflammations of the liver, and alle the inwarde parts". Turner tells us, -" Dases, whyche groweth abrode in every grene and hye ways, the northern men they call thys herbe a banwurt, because it helpeth bones to knighteth agayne".

Another old northern name for the plant is "gowan" has been usually , though erroneously, supposed to relate to the golden colour of the centre of the blossom, but is evidently derived from the Celtic guen or guenes, meaning fair or white.

Close up of the flower. 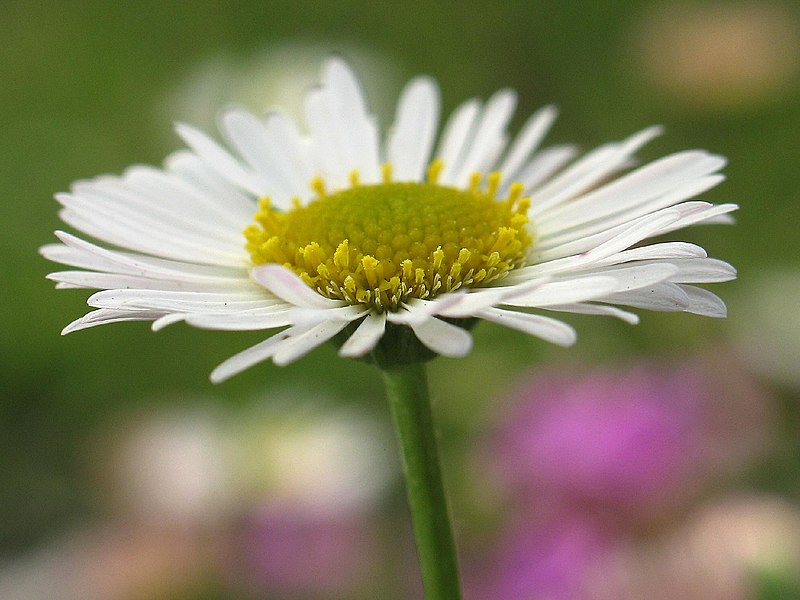 The rootstock is composed of short stolons which produce fibrous roots; these short creeping stolons, if left to grow naturally, will, over the span of a few years form a patch or colony of new plants. From the stolons arise the spoon shaped foliage that grows close to the ground thus nothing can grow beneath them. The foliage has somewhat scalloped margins.

From this rosette of foliage rise up flower stalks that bear a single flower head. The flower head is composed of a central disc of yellow tubular florets which can be seen clearly in the photograph above. this central disc is surrounded by white ray florets, which many think of as being the petals. When the flower head is viewed from beneath there is often a pink or reddish hue evident.

Pollination is achieved with the aid of many insect species. The flowers are succeeded by the fruits which are called achene's. As the seed ripens they are released. On roadside verges and lawns that are regularly mowed the achene's are spread far and wide by the high speed rotating cutting blades.

There are many species of Bellis cultivated for gardens with large double flowers such as the red variety above. These flowers are usually sterile and can only be propagated by division of the roots which is carried out during the autumn. Properly looked after these plants will abide for many years producing countless numbers of blooms.

Culpeper {16th century}-- stated that the daisy was " Excellent good for wounds in the breast and very fitting to be kept both in oils and ointments and plaisters, also in syrup"

In archaic times there was a strong belief in the "Doctrine of Signatures" {Every plant had , by colour or form, a divine pointer to the affliction they were meant to cure} in the case of the daisy the flower was said to resemble an eye, thus it was recommended as an eye wash.

MODERN DAY USES-----The whole plant is harvested preferably when in flower. it is said to have the same properties as Arnica. The infused oil of the fresh herb is used in salves and ointments.

An ointment can be made from the leaves for external use on bruises. This ointment was particularly popular during the 14 th century.

A decoction made from the root can ease the irritation of eczma.. The roots should be dug up during the autumn.

A syrup can be made from the flowers that eases the symptoms of colds.

Images on this page may be reused. however, the name of the author must be attributed along with any accompanying license.

ASSOCIATED PAGES---Click on the content banner at the top of this page and scroll down to view.

Flora via Links. click on the links banner at the top of the page. Scroll down to relevant box. Click , this is a direct link to the article{s}, Includes the series Past and Present Medicinal Uses.

Flora via your search bar