If for reasons beyond my control, I can not get out into the countryside on a particular day, I find compensation in the confines of the garden a relaxing way to spend the last hour of daylight. There is still time to savour the flowers in a beautiful light which seems to enhance certain colours particularly red and white flowers. The late industrious bees milk the last of the daylight hours as they hum from bloom to bloom.

As a naturalists I especially, enjoy in this tranquil period, observing the swifts that scream around the chimney pots, their amazing aerial ability never ceases to amaze me, as they trawl for flying insects in the cooling summer air.

I look forward with anticipation to their imminent arrival on the 1st of May {locally}, and for as long as I have kept notes the birds arrive bang on time, year in year out, with the exception of 1987 when for some reason they were 2 days late arriving on the 3rd of May. When one considers the distance they travel from Africa to the north west of England this is an amazing thing.

Swift on the wing. 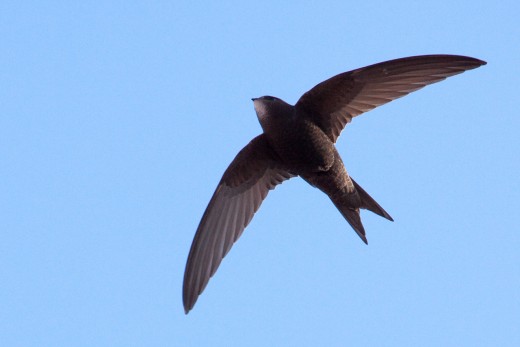 The aerial skills of the swift are legendary. Photograph by courtesy of Pawel Kuzniar.  CC BY-SA 2.0 license.

In the UK they are placed on the Amber list of conservation concern due to losses of between 25-50% over the last thirty years or so. Especially from 2007 onwards.  The population is now estimated to be 87,000 pairs in summer.   In Europe they are not a species of conservation concern with an estimated population of between 4.4 and 11 million pairs.

Their Latin name of Apus apus from the Greek A-indicating without +  pous meaning foot. Alludes to the time they spend on the wing and the fact that their legs are not strong enough to support them on the ground. 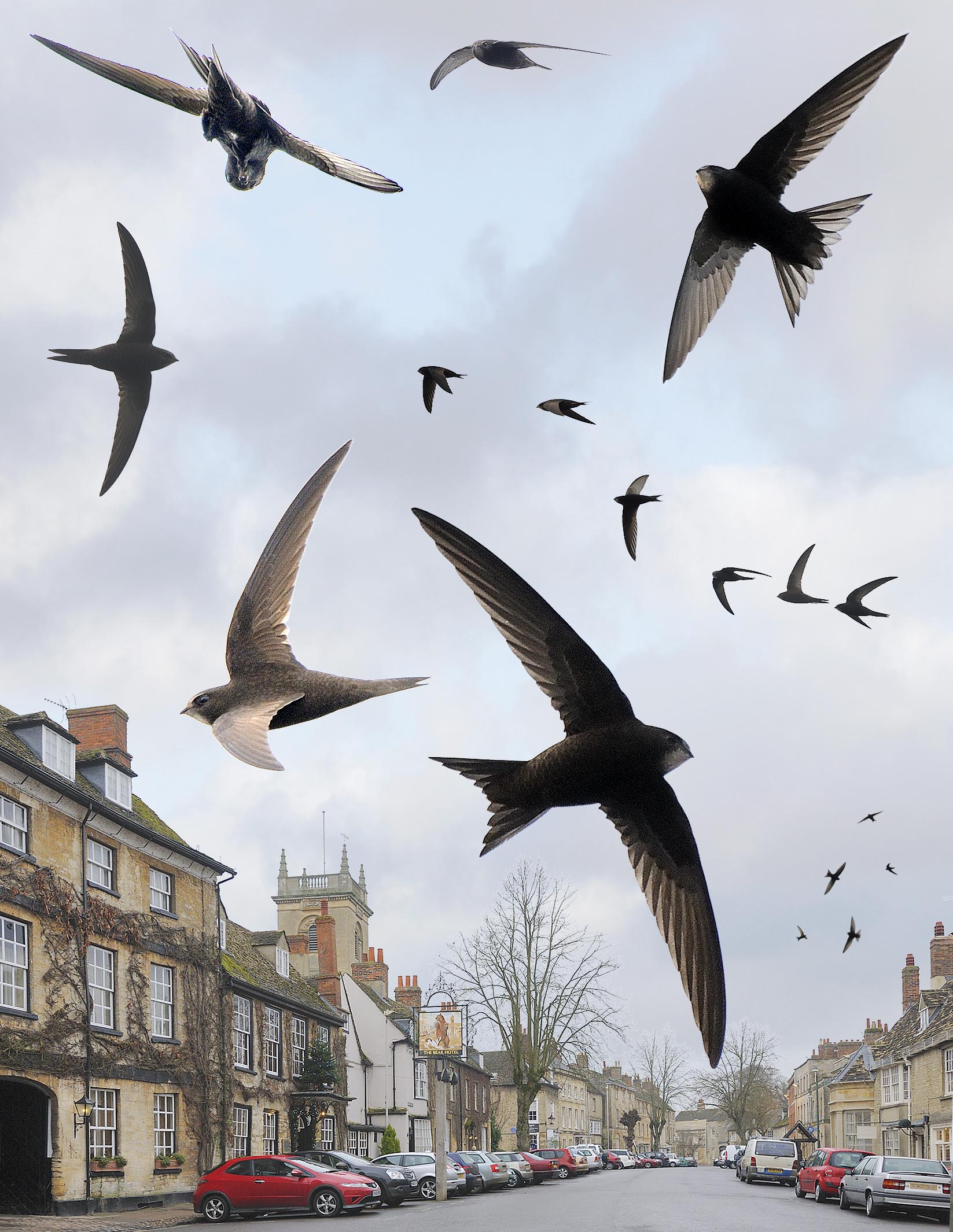 This master of the skies can be identified by its salient crescent shaped wings, and their dark colouring . When in flight they appear to be a universal black colour, although as the above picture clearly demonstrates the throat is whitish, the tail is forked.but they lack the streamers of the swallow.

The screams one hears whilst performing this winnowing, wheeling flight, consists of but two notes. The higher one is the female while the lower one is the male answering her call. The birds belong to the family Apodiforms which derives from the Greek apous, meaning "with no feet". Of course the bird does have feet but they are for all intents and purposes redundant as far as terrestrial walking is concerned. They are small and placed at the back of the body, thus the bird can only perch by clinging to vertical surfaces.

If the swift was to land on the ground he would be in some difficulty for the length of its wings and the positioning of its feet would make taking off almost impossible. Thus when he clings onto a vertical surface he can throw himself into the air in the manner of a parachutist. alluding to this the German name for the bird is Mauerseglar which translates as " wall glider".

Readers may find it surprising to learn that the swift eats, sleeps and mates on the wing. Another interesting fact concerns the young birds.Should the weather here in England be inclement for a protracted period the young swifts in the nest can attain a torpid state until the weather becomes fine once again and insect availability returns for the ever hunting parents.

The nest of the swift is placed in some crack or crevis in a building or cliff generally high up, but sometimes it may be located low down. A common place is under the eaves of an inhabited house, and small cottages are sometimes favoured by this high flying bird.

The nest consists of any light materials which have blown about for the bird which rarely, or never, settles on the ground voluntarily , does not alight to pick them up; this hay, straw, wool , feathers or hair may all be found matted together in a pack by the saliva of the bird, an abundant secretion of saliva being a characteristic of swifts. Indeed, one Eastern species of swift builds its nest out of dry saliva alone.

The places chosen by the swift are also selected by the sparrow and starling. The former is sometimes evicted by the swift however, for the starling the swift is no match. The eggs of the swift are usually only two in number and are of a long oval shape. They are pure white without gloss. Only one clutch is laid during the birds relatively short stay with us. The birds arrive in may and have left by the end of August. Local birds arrive by the second week of May and they tend to return to the same nest site year after year. They are also known to sleep in the nest a rare habit among birds.

The eggs are incubated for 19-25 days and the young fledge at around 37-56 days. Studies have revealed that young swifts do press ups using their wings to prepare them for their first flight. When a young swift leaves the nest it usually heads straight for Africa and it may not touch "down " again for two years. The swift lives a perpetually aerial life coming down for only a brief period each year to breed. They live , feed and even sleep on the wing.

The typical life span of the swift in the wild is estimated to be nine years. They are four years old when they begin to breed. They feed on insects and spiders caught in flight.

Eggs of the swift. 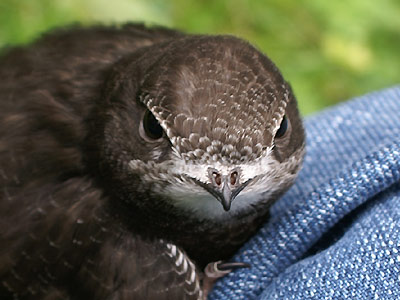 This young swift will soon leave the nest and head for Africa.   Public domain  Wikipedia.

Once the young birds leave the nest they fly, by some ancestral instinct, to Africa, making this journey without their parents. Studies have revealed that the young birds spend the the first two years of their life on the wing, until they are old enough to mate and nest. sadly the number of swifts seem, like many other species, to be in decline. Surveys are currently being carried out to ascertain why.

Several on the wing

UK-Amber listed due to declines in population/distribution of 25% or more over the last thirty years.