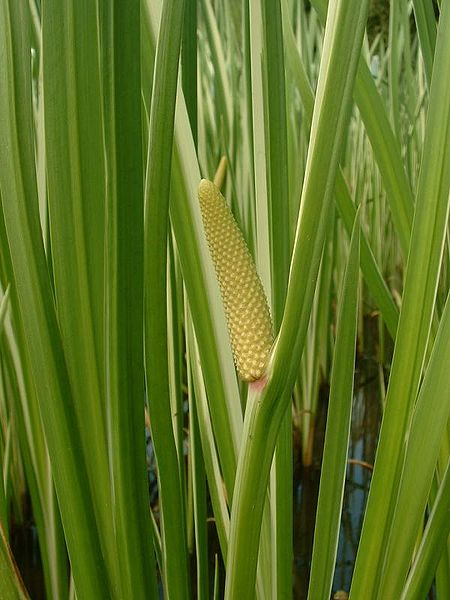 The Sweet flag belongs to the order of plants known as the Acorales and the family Acoraceae and is given the genus name of Acorus which derives from the Greek koreon indicating the pupil of the eye, it was once used by the ancients to treat diseases of the eye. The specific name calamus is also derived from the a Greek word kalomos meaning a reed.

Even though the species is present throughout Europe it is thought by botanists to be originally a native of the marshy regions in the mountains of India. In England it was thought to have been introduced in 1596, and is now found wild at the margins of ponds and rivers. John Gerard the 16th century herbalist was thought to have been the first to grow it after he was given a piece of root by the Apothercary Antony Coline.

Here we review the species and its past medicinal uses, along with observations and extracts from past herbalists. We start the review, as always, with a description of the species.

This species is known by alternative common names which include Myrtle flag, Myrtle root and Calamus.

The root which is a rhizome is horizontal, long and about the thickness of a man's finger. It is jointed and marked with the remains of former leaves and it is furnished with several fibrous rootlets. Externally it is of a greenish brown colour while internally it is white, soft and spongy.

The foliage is of this marginal plant is reed like and from two to three feet in length. They are erect, ensiform {sword shaped}, acute, sheathing often wavy at the edges and of a yellowish green colour. They are very similar to the foliage of the yellow flag iris although it is not related to the Iris family. All parts of the plant have a unique odour.

The flower stem known as the scape arises from the axils of the outer leaves, it is longer than the foliage and of a triangular shape. from one side near the center of the stem it sends out at an angle a solid, cylindrical blunt spike called the spadix,{see photograph above}, which tapers at each end from two to four inches long. The spadix is stalkless, often somewhat curved and densely covered with small, greenish-yellow flowers.

Each tiny individual flower contains six stamens enclosed in a perianth, with six divisions and surrounded by a three celled, oblong ovary with a sessile stigma. The flowers are sweet scented and so formed that cross pollination is ensured. However, the plant is not fertile in the UK as it is in Asia.

It is easily distinguished from all other British plants by the spadix which appears in June and July and by the fragrance of the roots, stems, flowers and leaves. 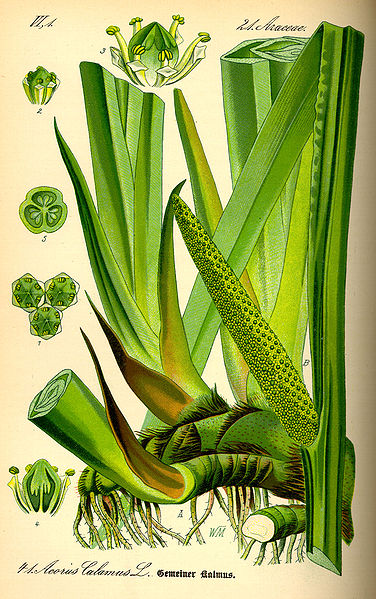 Historical medicinal and other uses of Sweet flag.

In some counties of England in which the plant occurs it was formerly used to strew the floors of houses instead of the conventional rushes, and because of its sweet smelling odour it was also used on the floors of cathedrals on festival days. The root was used for several articles of perfumery and the French snuff ' a la violette', was scented with it.

Brewers were also said to have used it to give flavour to their porter and in the United States it was used by country people as an ingredient in wine bitters, and by the Swedes in spirits distilled from corn. the whole plant is said to be rejected by cattle, and is obnoxious to most insects, hence it was placed in drawers and on shelves to protect clothes, books etc from devastation.

The volatile aromatic oil obtained from it, like that provided from the rind of the birch tree, would no doubt prevent mouldiness and it was also used for the purpose of tanning leather.

The root was the main part used for medicinal purposes. There were two main varieties that were employed in medicine. The one brought from Tartory { an old word used until the 20th century referring to the Great Steppe in northern and central Asia} and the one brought from Poland, generally referred to at the time as Acorus verous The root was said to be the thickness of a man's finger, knotted cylindrical, slightly flattened, reddish externally and whitish within. The other called Calamus aromaliculus which came from Levant {Syria} by way of Marseilles, the root of which was about the thickness of a quill, reddish grey externally and white within. Both types were said to give a pleasant odour, and a warm pungent, bitter and aromatic taste, which improved by the process of drying. The aromatic principle was an essential oil which was separated by distillation. It is lighter than water and of a plae yellow colour, and instantly decomposes sulphuric acid. The other constituents of the root are, according to Tromsdorff, resin, extractive, with a little muriate of potass, gum,phosate of potash, starch and woody fibre. 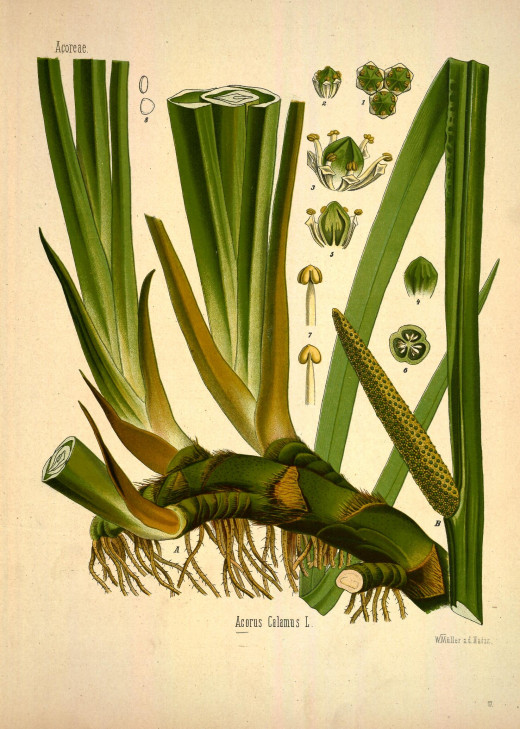 According to the British Flora Medica {1858} The medical virtues of this plant was known to the ancient Greeks and Arabian Physicians. " It is one of the few aromatics indigenous to Europe, and by no means deserves the neglect to which it has been treated by the modern day physicians " The author goes on to say " in consequence of its prompt and powerful tonic action upon the system, it has been regarded as excitant, stomachic {tones the stomach} diaphoretic { excessive sweating associated with shock} diuretic and incisive."

It was also regarded as useful against Colic,and Flatulence, caused by Dyspepsia {indigestion} and in Vertigo, headaches and the like, proceeding from the same source. Some authors praised its effects in Leucorrhaea { denotes a thick, whitish or yellowish vaginal discharge}, pulmonary chronic catarrh's and dysentry { inflammation of the intestine, particularly the colon}. " However, where the was a tendency to haemorrage it should be given with caution".

Herbalists claimed the best affects have been obtained from it in the low sinking stage of malignant fevers, and it was regarded as being excellent in the cure of intermittents. Ages was said to have been cured by a ' free use' of the tincture, and was said to be very beneficial in that distressing complaint to which sailors were liable, well known at the time as wind colic, given in a hot decoction in the manner of ginger tea, it quickly relieves the distressing swelling of the abdomen.

herbalists also claimed it could be used advantageously given in the dose of a scruple to a drachm {one eighth of an ounce}. It was usefully combined with magnesia and chalk in the flatulent colic of infants. An infusion ot two to three drachms of the root in a pint of water or white wine was regarded as an excellent stomachic, a wine glassful to be taken at a time. The volatile oil was sometimes given in combination with sulphate of quinine in the dose of 2-6 drops.

The fresh root candied, was used in Turkey and India by dyspeptic patients, and it was masticated as a preservative against epidemic diseases. Until relatively recently the People of Norwhcih {East Anglia -England} still valued the plant as a cure for agues, and ground the root to a powder to be thus used. Up until the 1930's in was still in regular use medicinally in many countries of the world.The root was used in different preparations as a digestive medicine and this was official in the United States Pharmacopoeia and in many others.

It was recommended that the rhizomes were gathered when large enough, generally after two or three years, and before they loose their firmness and become hollow,late autumn or early spring. If the plant was actually growing in water, the raft-like masses of interwoven roots and mud, which in a river or lake float about a foot below the surface of the water, are cut out in square sections, raked to the lake edge, and the leaves stripped off and separated.

Whether growing in water or not the rhizomes required a thorough wash in a trough, and then deprived of the much less aromatic rootlets, which are four to six inches long. These are unbranched but near the tips are furnished with soft thin fibrous growth. The essential oil was procured from the root by means of distillation. The oil is contained in all parts of the plant although the greatest concentration is contained in the root rhizome. The oil is strong and fragrant, its active ingredients are taken up by boiling water.

From the earliest times it has been utilized by the natives of India. The candied root was once sold as a favourite medicine in every Indian Bazaar. There is on a record a 17th century reference to a broth flavoured with Angelica seed and Calamus 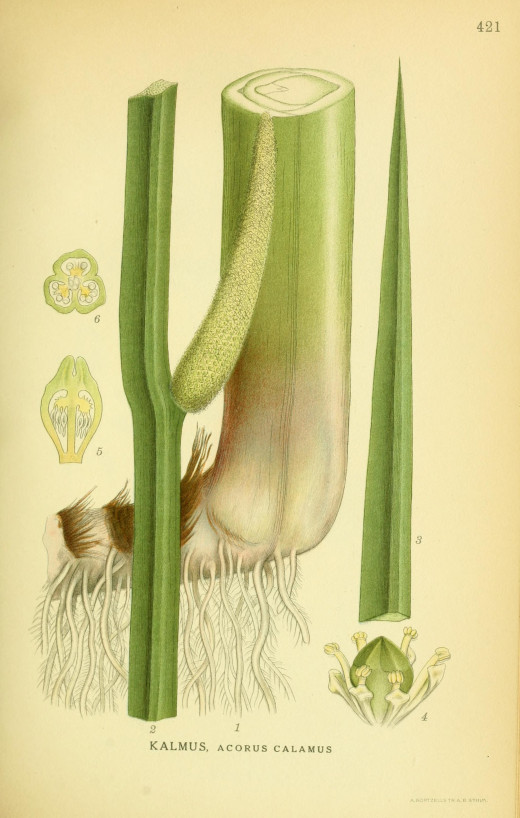 Modern day science informs us that Sweet flag {Calamus} should not be taken during pregnancy. Indeed,although as we have seen, it has been long used for medicinal and culinary purposes it is prohibited in the United States as an ingredient for food products, due to the association with Isoasarone, which has led to the development of tumors in animals.

Even in the more up to date herbals recipes for Calamus can be found. One such herbal recommends an infusion of the root to recover the loss of appetite to help the stomach, intestine and gall bladder problems. However the dose used per water amount is very small.

Because of its mutagenic activity Calamus can not be sold in the USA, and the plant is listed on the F.D.A poisonous plants data base. Even in countries where no such ban has been applied modern misuse of the root oil {which can cause hallucinogenic effects when taken in the wrong dose} has raised concerns. The essential oil of Calamus contains Aserone which has a high toxicity when over doses are taken. European varieties are though to have a lower concentration than those that are native to India.

Summary--it seems the professional assessment of the drug is one of caution. Acorus calumus should not be taken internally unless prepared and administered by a qualified herbal practitioner.