"CHESTNUTS ROASTING ON AN OPEN FIRE"

The genus Castanea includes many species of chestnut trees, which belong to the beech family Fagaceae. Two of these species here in England are familiar to most people. The horse chestnut which provides the "conkers"much sought after by school children {and others} who enjoy the game commonly referred to as "conkers". The other species is the sweet chestnut which is also sought out for its fruits, not for any game but for culinary purposes.

The sweet chestnut Castanea sativa {sativa indicating a food plant} is also referred to as the Spanish chestnut. It is a medium to large deciduous tree which can attain the height of 35m but usually less.

Components of the sweet chestnut. 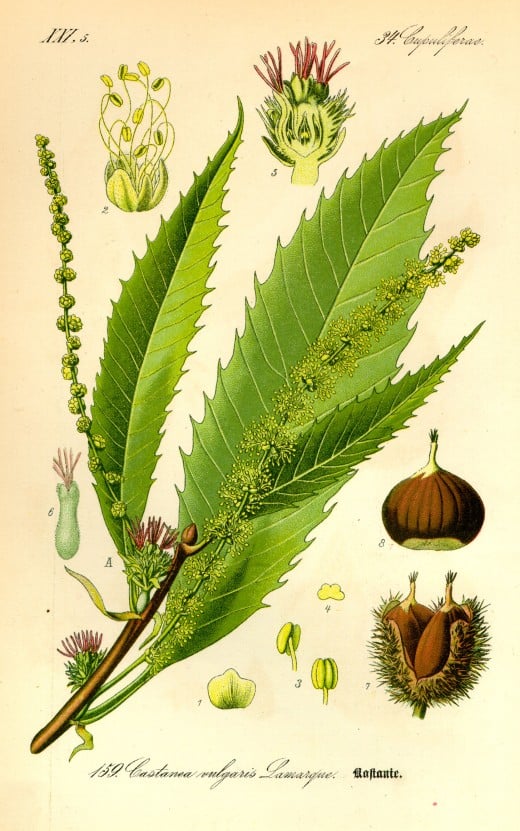 The tree when growing in close contact to other trees such as in a woodland, tend to be columnar but when they grow where there is space the crown spreads out impressively. The bark of the trunk when young is smooth and of an olive brown colour. As it matures and ages the trunk develops deep vertical spiralling ridges, and the colour changes to a greyish brown colour.

The leaves are arranged alternate and of a leathery texture with stalks 1.5-2.5cm long. They have coarse teeth along their margins. Dark green and shiny on the upper surface, paler beneath with hairs when young becoming hairless as the leaf matures.

Image by Dal at dalswildlifesite. 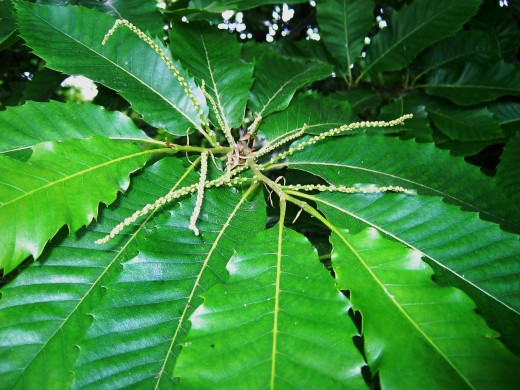 Flowers and developing fruit of the Horse chestnut. 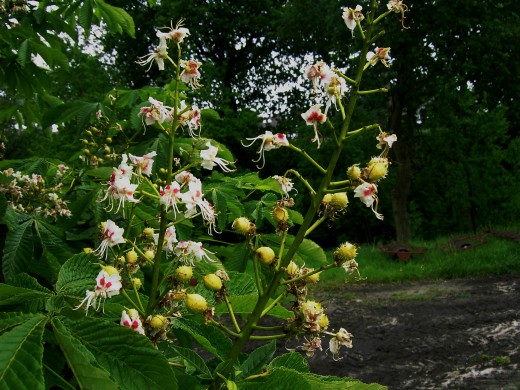 Foliage of the sweet chestnut is lance-shaped

Image by Dal at dalswildlifesite. 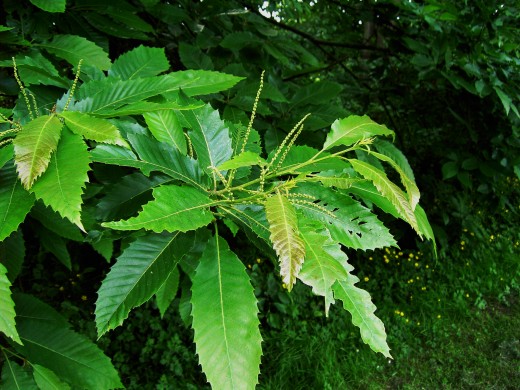 The foliage of horse chestnut is finger-like {Palmate} 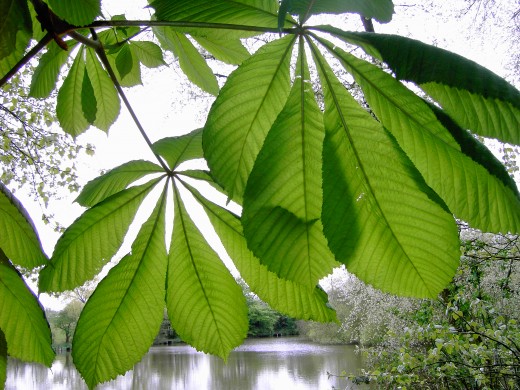 The flowers are in the form of tightly knit, stiff, linear catkins many of which only bear male flowers. Other catkins display both male and female flowers, the latter are usually clustered in twos and threes towards the base. They flower in June.

The fruits are very spiny husks, which when ripe split into four sections to reveal the enclosed shiny, dark brown, leathery but edible nuts.

Fruit and spiny case of the sweet chestnut 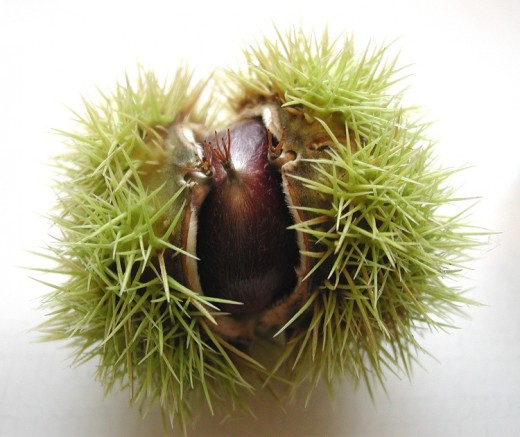 Sweet chestnut foliage were used as a popular remedy for respiratory problems and in particular whooping cough. They have astringent and tonic properties. This was made up from 1oz of the dried leaves in a pint of boiling water was administered in a tablespoon to wine glass doses, three or four glasses drank daily. It is used in commercial medicine and in some shampoos. They have also been employed liquidised in soups.

They are also employed in Bach flower remedies.

Conservation in the UK

In the UK there is currently a ban on importing Sweet chestnut trees from countries affected with Sweet chestnut blight in an attempt to stop the disease from entering the country. It was announced by Owen Patterson on the 19th of July 2013.

A consultation showed overwhelming support for the ban which will be implemented this summer.According to the DEFRA website, Owen Patterson stated-- " I am taking action to protect our sweet chestnut trees from areas in Europe where they have Sweet chestnut blight before the planting season."

" Tree health is one of my top priorities and I am acting swiftly to protect our woodland and the thriving economy that relies on it. The ban follows on from a recommendation made by the Independent Tree Health and Plant Biosecurity Expert Taskforce set up by Owen Patterson as a result of the discovery of Chalara fraxinea {Ash die back-see my hub The tall and handsome flowering ash tree} in the UK last year, to consider and address the current and possible future threats to tree health. It was made up of a group of expert scientists, and chaired by professor Chris Gil

The Right Honourable MP Owen Patterson, responded to the report by announcing that work must be started straight away on the recommendations around developing a plant health risk register and implementing procedures to predict, monitor and control pests and diseases.

Sweet chestnut blight was one of the diseases considered in the initial risk register which was developed at the beginning of July. The disease is present in Southern Europe where it has caused loss of trees, and concerns about it entering the UK, were raised by the CLA and the Horticultural Trade Association, among others.

DEFRA, has made tree and plant health one of its top priorities, Sweet Chestnut trees are wide spread on the lighter soils in southern Britain, where it has been an important coppice species.

Brief history of the sweet chestnut.

The tree was once planted in monastery gardens by monk. They are famed for their flavour when roasted. However, in the U.K. they tend to be smaller and only one in three is estimated to reach good edible quality. Most of the edible nuts bought for home consumption or to be used in the confectionery trade are imported from Spain and other European countries.

Although the wood is durable when dried it does tend to split and warp during the drying process, thus it is usually employed as fence posts and panels and also for outside cladding around houses. The wood was also once used as a natural tannin for tannin leather before the advent of synthetic tannins which have now found favour. 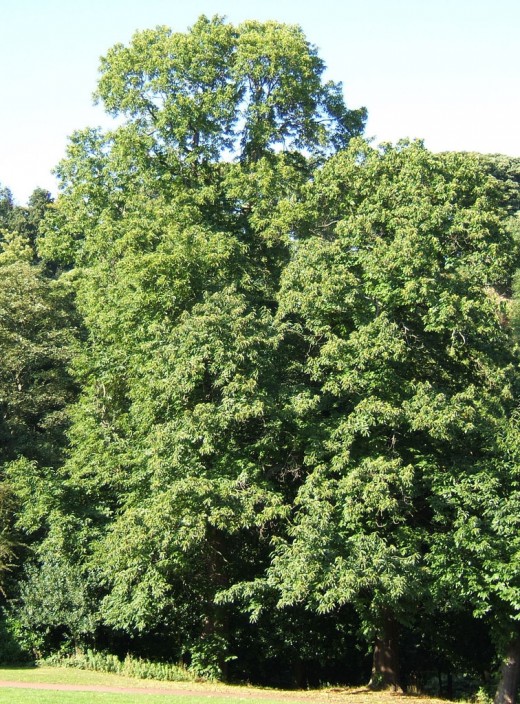 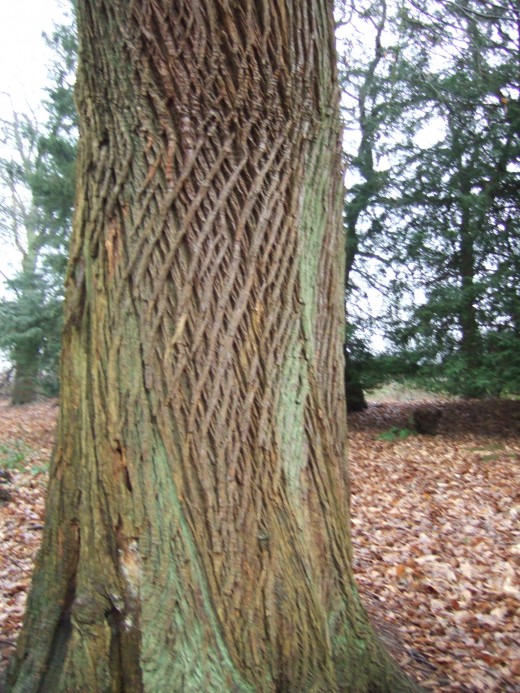