Sundews belong to the Droceraceae family of plants within the order Caryophyllales and contains at least 194 carnivorous plant species. Both the botanical names derive from the Greek Drosos=dew {develops} and the English name sundew,derives from Latin ros solis,meaning dew of the sun.

The range of the sundew  genus stretches from Alaska in the north to New Zealand in the south.In Australia roughly 60% of the species occur. South America and Southern Africa have more than twenty species each,and a few species are found in Eurasia and North America.

So far as the British species are concerned they form one of the smallest of plant families but certainly not one of the least interesting. They grow naturally in wet places on moors and heath ,especially where there is a bed of Sphagnum moss growing on a gentle slope with water percolating slowly through it. here with their simple roots among the Sphagnum,deriving probably nothing from it but water,they may occur in numbers,though scarcely noticed by the average rambler. The commonest form in the UK is the round-leaved sundew,Drosera rotundifolia.  Particularly in northern and western Britain.

Basic biology of the round leaved sundew

The leaves radiate from a root stock and they are almost flat upon the ground,or the surface of Sphagnum moss.The blade of the leaf is circular and they are borne on short stalks. There are a large number of appendages fringing the leaf blade and studding the upper surface of the blade. These are often spoken of as hairs, but though they may  have a similar origin to hairs, they are too fleshy to warrant such a description. They have a red or crimson tint and end in large glandular tips which excrete a clear, sticky  fluid like liquid gum. { clearly seen in the image above}. When the leaf is fully expanded,all these tentacles.as they may be more aptly described, bend away from the center of the leaf, and in the sunshine,when each gland is surrounded by a globule of fluid, the leaves are no doubt mistaken for dewy flowers by small insects which light upon them in the hope finding honey to sip-the supposed dew, flying insects being thirsty creatures.

However, they will find neither honey or dew and only death awaits them when dissolution occurs and they become food for the plant. The fly touches the tentacle glands with its limbs and is held fast by the sticky fluid. The fly will seek to free itself, but only succeeds in further irritating the glands,which pour out more mucilage and conveys the irritation to the leaf generally. When this occurs all the tentacles bend over the hapless fly. Their sticky tips adhere to the wings,its back ,its sides,whilst the edges of the the leaves turn up,and so the center of the blade forms a small basin,in which lies the fly securely held by a network of tentacles.

The plant then exudes a digestive fluid which actually dissolves the soft parts of the fly,and when the process is complete, the leaf absorbs this extract of the fly to the advantage of the plant.

Evolved to be carnivorous.

Why should a plant have evolved to be carnivorous ? to this end I turn to Edward Step,who explains this process in his book 'Romance of Flowers' published in 1917 he writes. " The answer is to be found in the habitat of the plant. Nitrogen { See peas and Clovers,part-1} is so liable to be washed out of the soil, that we should scarcely expect to find much of it where a spring or drainage from the moors above comes down unceasingly. In the latter case there would probably be a small percentage of nitrogen washed down, but the sphagnum would most likely secure it, and, the sundews have therefore given up competing for it through their roots,and instead have so modified their leaves that these organs are able to obtain it for them."

" It is a noteworthy fact, that though this carnivorous habit  has developed in plants belonging to other families unrelated to each other, they all agree in the fact that they grow in bogs and ditches, or places where the roots are steeped in water,and it is reasonable to suppose that this similarity of habit has led the plants to adopt like means to obtain the necessary nutrition. "

" Such a power could not be so well exercised  if the specialization of the leaf form were not correlated with a remarkable degree of sensitivity. This exquisite sense is restricted to the glandular tips of the tentacles,and it is not until some portion of the insect has come into actual contact with this that the neighbouring tentacles know anything of matter. But no sooner does the leg of a fly press the globule of mucilage and touch the gland itself that the excitement is communicated through the tentacles to the leaf substance, and so to all the other tentacles."

" It is not merely irritation that is communicated by one tentacle to another ,but the knowledge of direction whence the irritation proceeded. This is shown by the fact that the tentacles so apprised bend over towards the center of disturbance. It might be supposed that so sensitive an instrument as the sundew leaf must be, with its many tentacles,there would be a considerable amount of wasted effort owing to irritation being accidently set off by grains of sand,drops of rain etc, falling on the leaves. But this is not so."

" It is remarkable that so fine a sense is possessed by the glands that they refuse to notice any inorganic solids. Place a gravel fragment on the leaf,and the tentacles will take little notice of its presence, but if the foreign substance be the merest fragment of hair,not only will the base of the tentacles be inflexed towards it, but the fluid exudes from the gland becomes acid and of a digestive quality. This is accompanied by changes in the substance of the gland of the tentacle itself-the purplish colouring matter being gathered up into little masses suspended in a colourless fluid."

" When the excitement has ceased and the tentacles have resumed their normal position it is found that this colouring matter has been again dissolved,and now gives the colour to the whole of the internal fluid."

In nature the sundew is concerned with catching small flies and beetles, and it is almost an impossibility to find a plant that does not bear proof of this fact in the majority of its leaves. When the leaf has closed upon its victim then the tentacles have returned to their widespread attitude, the indigestible parts of its last meal are still to be seen in the center of the leaf .

The flowers are small and inconspicuous with white petals just a little longer than the sepals and both pistil and stamens maturing at the same time. In many cases the flowers do not open or only very slightly, but the pollen grains send out shoots which reach the stigmas and so self fertilization occurs. 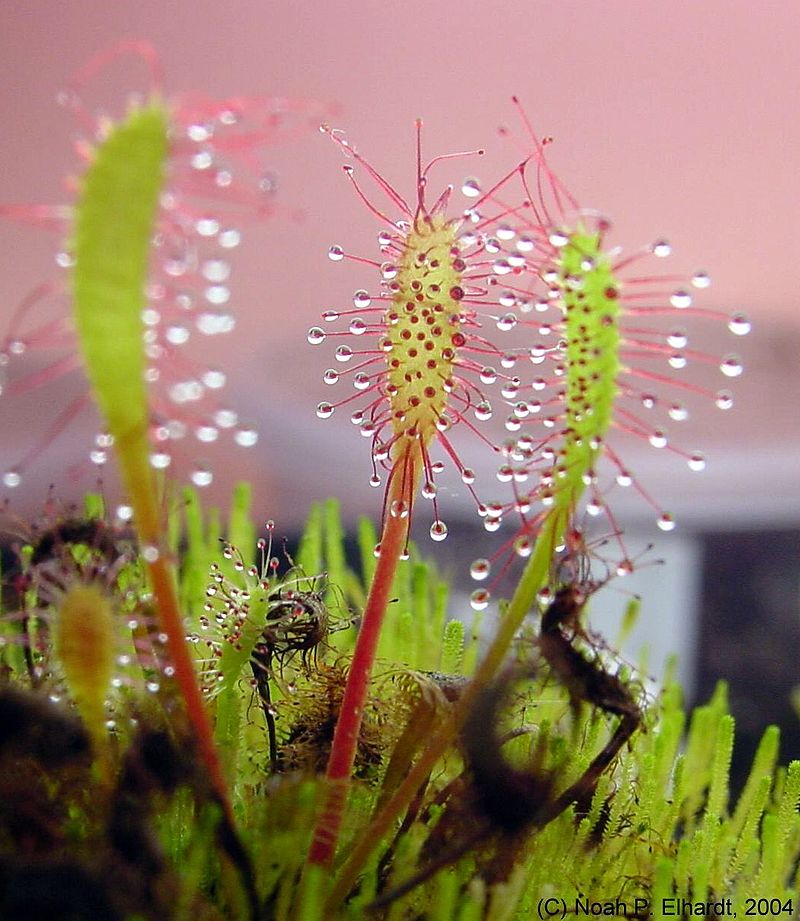 Other British species of Sundew.

Drossera intermedia,is also native to the UK and on the continent of Europe,south eastern Canada,the eastern half of the United States,Cuba and northern South America. The spoon shaped leaves of this species hold themselves erect while those of the previous species hold them extended at right angles to the root stock.

The leaves of Drossera anglica,  {Pictured above}, are larger and also held almost erectly. It is thought that the two species with the more erect foliage will catch more low flying insects while those of the round leaved Sundew will more likely capture those insects that crawl over them,whichever is the case, these are fascinating plants.

Please note that if any of the images on this page are reused they must be reused with attributions to the author and the relevant License shown.

The images on this page may be reused. However, the name of the relevant author must be attributed along with accompanying License.

All other plants that occur on this site are grouped together in the content banners above. Click on the relevant content banner and scroll down to view.

Flora via Links banner. Click on the Links banner at the top of this page. Scroll down to relevant box. Click, this is a direct link to the article . Including the series Plants ,past and present medicinal uses.