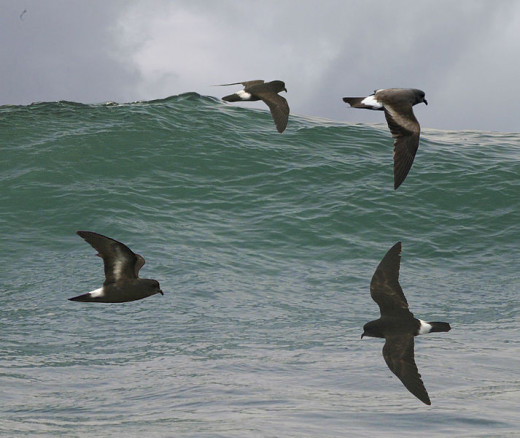 The European Storm petrel belongs to the order of birds known as the Procellariiformes and the family Hydrobatidae. They have been allocated the genus name of Hydrobates from hudra meaning water + baino to travel. The specific name is pelagicus derives from pelagos meaning the open sea.

In the UK, the bird is placed on the Amber list of conservation concern, due to localized breeding populations. [ estimated UK population being 26,000 pairs in summer]. Nearly 25% of the European population breed in Ireland , the majority of the population breed at less than ten sites. In Ireland it is also Amber listed. These sites include Skerries in County Dublin, Carnsore Point,Wexford and Annagh Head County Mayo.

This is the only species in the genus Hydrobates, some believe the name petrel is a corruption of pitteral alluding pitter-pattering across the waves.The Gaelic name for the bird is Annlag-fairge, the Welsh Pedryn Drycin and the Irish is Guairdeall.

Here we look at the species which includes notes and observations from past ornithologists and other eminent writers. as always we commence with a description of the subject under review. 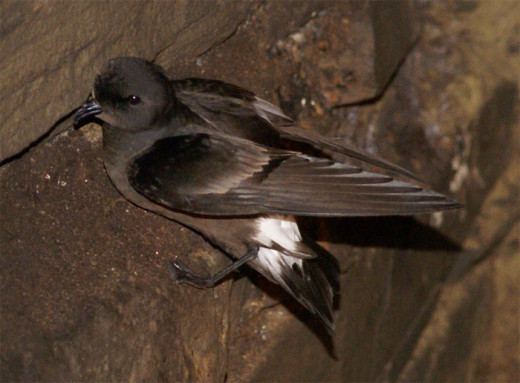 The entire length of this handsome bird seldom exceeds six inches. The iris is dark brown, the head,neck, wings, back,chin, throat, breast, belly and vent are all sooty black. The upper tail coverts and the sides of the vent are white,as are the outer edges of the small flight feathers.. The webs,toes and legs are black.

The bill is black and like that of all the Petrel tribe is very peculiar in its construction. The end of the upper mandible is strongy hooked and gives the illusion that it is a separate piece put on or added to the true bill. There is , lying over the upper portion of the beak, a distinct lump or prominence formed by the tubular structure of the nostrils, which show two distinct orifices in front. The lower mandible follows the curved line of the upper one, but is slightly angulated and terminating somewhat abruptly.

Until about twelve months old, the young birds are more rusty in colour than the adults, they are without the wide edges to the small flight feathers, and the sides of the vent are not so white.

The broad wings taper and sweep back, there is a white line on the underside of the wings. the head is rounded the tail broad and rounded. The rump also shows white. The legs are short and not designed for walking on land. The bird often settles on the water with wings raised.The flight is constant with relaxed wing beats

Storm petrel out at sea. 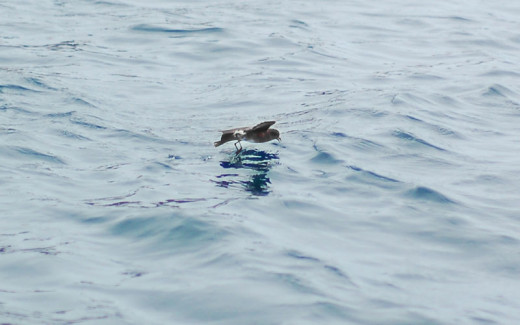 This Petrel is a veritable gypsy wanderer, for it roams the Atlantic all the summer even reaching south Greenland, while winter finds it flitting across the surf that breaks upon the shores of South Africa. The storm petrel seems to shun the neighbourhood of land preferring to follow the open sea for many months together, and those of the wildest months in the whole year.

It was once commonly referred to as the 'Stormy petrel' and is probably the smallest web footed bird. from the belief that the birds were associated with rough seas, they were regarded by seafaring men, with a feeling of awe and foreboding. This gave rise to names such as 'devil's bird' and Mother Carey,s chickens. The latter is thought to have derived from a corrupted invocation of the Virgin Mary, as 'Mater Cara', alluding to the fact that sailors believed that the arrival of a petrel in the wake of a vessel, heralds a spell of unbroken weather. These names that are so out of place where this pretty little bird is concerned.

Fortunately for the Storm Petrel it was regarded as being very unlucky to harm or to kill them, and they were generally left unmolested. according to Buffon, the name Petrel is derived from Peter the Apostle, who walked upon the water., alluding to the way the bird seems to run along the waves. The Storm Petrel is said to be found in greater or lesser numbers in nearly every part of the open sea at great distances from land, and, most frequently at twilight, or in dull gloomy weather. However, there are records of them being found far inland, especially when unusually strong gales have been prevalent.

The bird usually flies directly into the teeth of the the wind, and is often a source of great astonishment as to how a bird so small and light can progress so easily against a gale that would blow a full grown man off his feet.

The diet of this species consists of marine insects, usually encountered among the masses of floating sea weed, small fish and chiefly surface plankton, all are taken whilst on the wing. 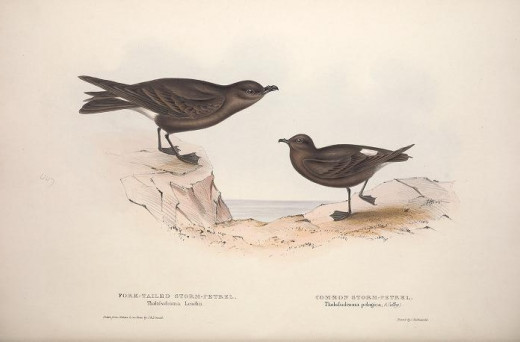 Pairs have a repeated nocturnal display flight in which the male chases the female, the chase accompanied by flight calls, it is thought that the birds pair for life. breeding commences late in the season and some birds do not lay their egg until as late as June. During the day the parent birds remain in their burrows and only leave in search of food as the evening approaches. During the day light hours they would be predated by gulls. They are social birds and breed in colonies along the north Atlantic coasts. The nest if that is what it may be called is just a scanty bedding of hay or other chosen lining.

The eggs or more correctly the egg is laid either among debris of the cliffs or more commonly in holes,frequently burrows. As the birds are nocturnal by nature the only way to census them is to play a call {a delightful purring} at a hole to see if any nesting birds respond. The egg is of a dull white colour and of an oval shape. It is incubated for 38-50 days, both birds sharing the task. Fledging Takes place in a further 56-73 days after hatching. because of the long incubation and fledging of the young is a relatively long period only one brood is raided per year

Storm petrels do not breed until they are 3 or even 4 years old Young birds are often encountered inland in the unlikely months of June and July. One eminent ornithologist relates this story . " Mr. H.D. graham {1800's} states that he once took two Storm petrels of about a fortnight old, covered with a profusion of down, on the 8th of September. They were first fed with small bits of fish, which they took reluctantly, but soon developed a great partiality for cod liver oil, and 'would suck a stick' ,dipped in oil very willingly, clattering their bills and shaking their heads with evident satisfaction. I should conclude from this that the Petrels feed their young with the oil which they have the power of ejecting from their bills"

Reading these historical notes it seems the nestlings fledged about the middle of September, when they were about three weeks old-supposing that they were two weeks old when obtained, and became much dissatisfied with confinement, though they still had a great deal of down upon their bodies. Mr. Graham continued " Night and day their powerful wings were in incessant motion in their attempts to escape from the box. as soon as the lid was opened they raised themselves up until they could hook their bills on the edge, and then assisted by their wings, and scrambling with their claws they hoisted themselves up. When upon the top of the box, they would be satisfied for a little while, and shake themselves and dress their feathers. The instinctive love of motion, however, would soon return, and they went off on a voyage of discovery" 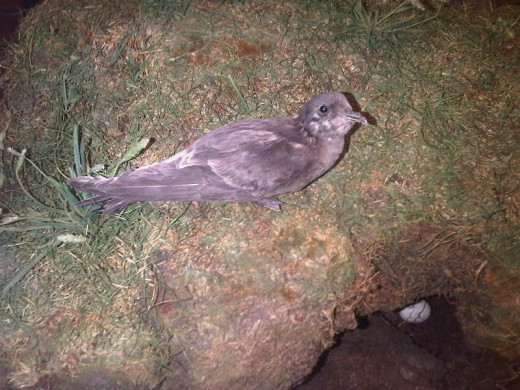 The imageson this page may be reused. However, the name of the relevant author must be attributed along with any accompanying license.