A look at the Stone fly and may fly

The Stonefly belongs to the Order of insects known as Plecoptera  from the Greek plekien { to briad + pteryx wing}. This refers to the complex veins on the two pairs of wings which are membranous and fold flat over the back.

Members of the genus Perlidae { common stone flies} have four membranous wings, the hind wings much larger  though not longer than the fore wings, folded when at rest. The antennae are long and thread like. The body is long, soft and often broad, bearing a pair of short, moderately broad filaments at the apex.

They bear a superficial resemblance to the caddis fly. They are often seen basking on stones. They are poor fliers. Anatomically, these insects are interesting  on account of the well marked divisions between the three segments of the thorax. In fact the head and thorax of the common stonefly equal half the length of the whole insect.

The minute eggs are contained in a  membranous capsule, and are carried for a while by the female before she deposits them in the water. Each female may produce upwards of six thousand eggs, a necessary requirement given that the larvae are the favoured food of fishes, hence the mortality rate is very high.

Nymph of the stone fly. 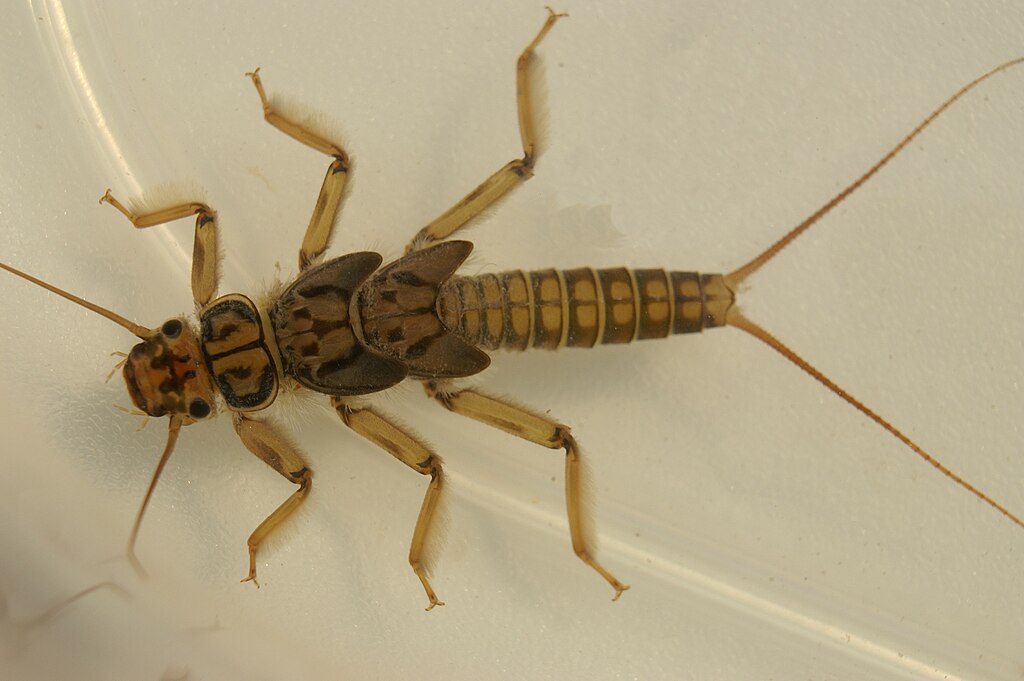 The larvae are very similar to the adults except that they do not have the wings, they posses filaments and long antennae. Although capable of swimming most of their time is spent beneath the stones in swift running water. Their flattened bodies make it an ideal place for them.

The mortality  rate among the larvae is increased by the fact that this stage of their lives is protracted, and, so often happens in such cases, the adults live for only a short period of time, sometimes as little as a few hours.

The diet of the larvae, often referred to as 'creepers' consists of minute aquatic animals, and they breath by means of paired tracheal gills. The nymphs leave the water before changing into adults. They climb on to some stone their skin splits and the adult stonefly emerges. the colour of the adult merges perfectly with the colour of the stone on which they bask.

Mayflies belong to the order of insects known as Ephemeroptera from the Greek ephemeros indicating short lived + pteron a wing. the hind wings are much smaller than the front wings and they are not folded when at rest. the abdomen bearing two-three, long, slender filaments. The antennae are short. 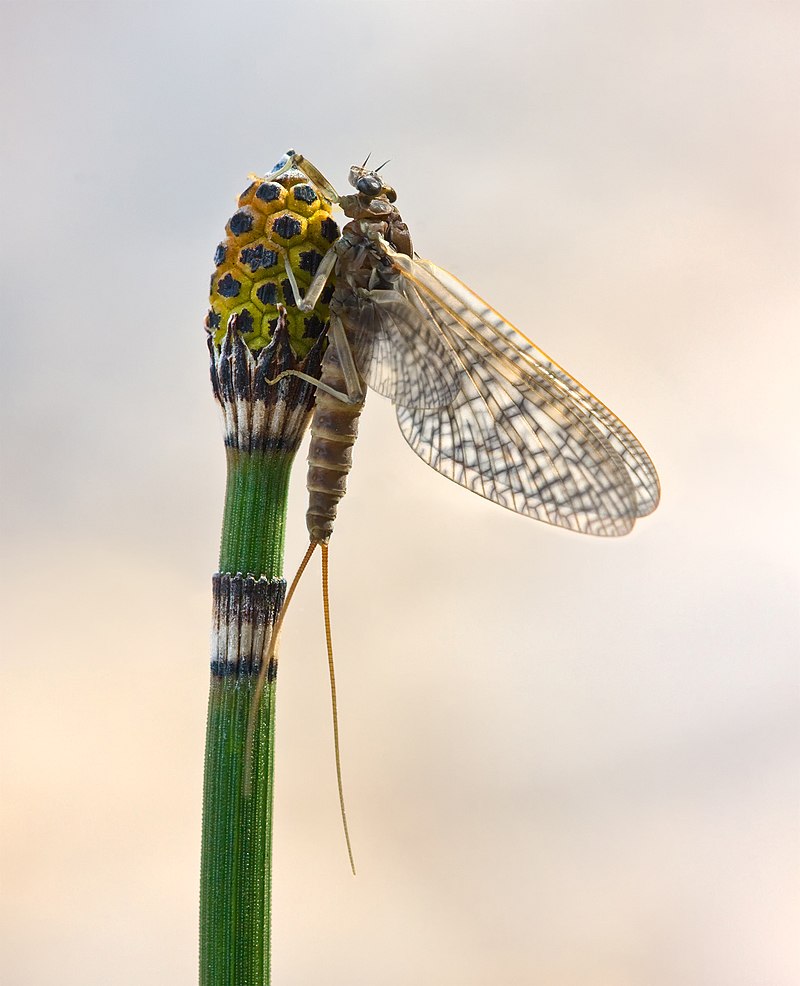 These insects commonly referred to as mayflies, sometimes as day flies,where also known to Anglers as green or brown drakes. Their larvae and nymphs are aquatic. There is one family in the order. Our common mayfly Ephemera vulgata is a typical species.

The females after pairing, which takes place in the air, deposited their disc-shaped eggs on the surface of the water, and they sink to the bottom. The larvae as soon as they hatch, bury themselves in the mud and commence their long larval life. This may be as a long as three years, and during this time they will undergo several moults.

Their food consists of, in the main, vegetable matter and respiration is achieved by way of trachael gills assisted by three filamentous outgrowths from the tip of the abdomen. then when the larvae have changed into nymphs and the latter are ready to take to the sir , there happens an event not paralleled among other insects.

the nymphs rise to the surface of the water, there is a brief pause before the larval skin splits, and they fly into the air.Not as perfect insects, but as sub-imagos. During this period of the skin splitting at the surface of the water and indeed, when they are in the air, they are heavily predated by fish who take them from the waters surface and by birds such as swallows as they take to the air.

The adults of Vulgata have three tail filaments and very short antennae. Their forelegs, which are useless for walking, are carried in front of the head, and at a distance may be mistaken for antennae.

They have incomplete mouth parts and are incapable of taking food. The lives of the adults are very short, though not as short as generally supposed with many individuals lasting much longer than a day , which is the the time they are generally supposed to live for.

The name of the relevant author must be attributed along with the accompanying license.