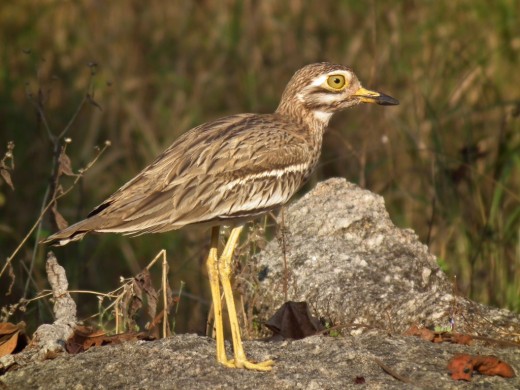 The stone curlew Burhinus oedicnemus belongs to the order of birds known as the Charadriiformes and the family Burhnidae within that Order. The genus name of Burinus derives from the Greek bous indicating a bullox+ rhinos meaning nose {bill}. The specific name of oedicnemus also derives from the Greek oideo indicating a swelling + kneme -knee. It is also referred to as the Eurasian Thick Knee/Stone curlew.

In the UK { 2014} they are placed on the Amber list of Conservation concern { Declines of between 25-50% } over the last forty years or so. There is an estimated 350 pairs { summer}. They are classed as migrant breeders. { Source the BTO}.

In Europe they are of 3 concern most not in Europe vulnerable. The total European population is estimated at between 43,000 and 68,000 pairs. The populations vary from country to country ,here are a few examples.

They breed in lowlands of Europe, central and southern Asia. They winter south to central Africa. Open habitats with sparse vegetation. 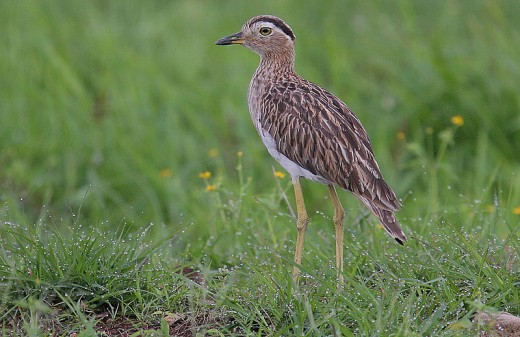 The stone curlews also referred as 'Thick knees' are quaint birds consisting of nine species within the family that occur throughout the tropical and temperate regions of the world, with two species being found in Australia. They are classified as wading {shore} birds ,however, most species prefer arid ,or semi arid habitats.

They are medium to large birds with strong bills, large yellow eyes { which give them a reptilian appearance} and mottled plumage. Thick Knees refers to the prominent joints in their long legs and apparently the name was coined in 1776 for the species under review. The term stone curlew derives to the broad similarities with the curlews { to which they are not closely related}.

They are largely nocturnal particularly when calling their loud 'wild wailing' notes. Most species are sedentary but the species under review is a summer migrate in temperate European parts of its range wintering in Africa.

In America they are represented by the Double-striped thick knee Burhinus bistriatus . It is a resident breeder in central and south America and a rare vagrant in the USA 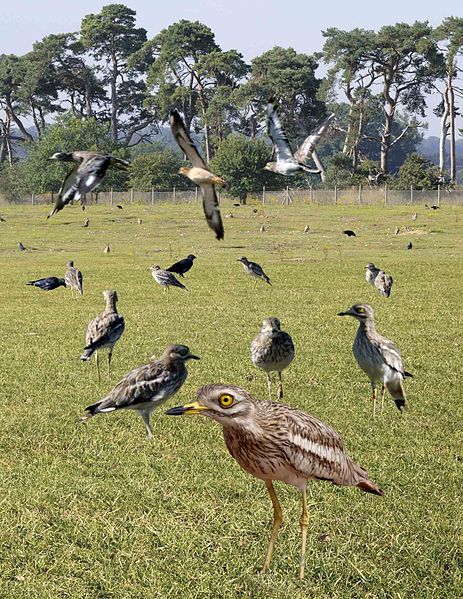 there is a pale stripe above and below the eyes which are large and yellow and indeed it was once referred to as the ' Goggle eye Plover'. The bill is relatively short but stout ,yellowish at the base darker at the tip. The chin and throat are white, the front of the neck and breast very light brown streaked with blackish brown and the lower parts are white streaked with brown..

The upper feathers are long, dark and streaked with sandy brown.. A broad pale band along the wings in flight, light and dark bands on pale inner wings with a white spot on black outer wings. The tail is paler. The head is outstretched in flight. The white bars on the wings are also conspicuous in flight. The legs are long and of a pale yellow colour. Both sexes are very similar.

In the UK the Stone curlew was once referred to as the 'Norfolk Plover' from its abundance in that county. It is rarely seen away from unenclosed country. Silent and quiet by day for the most part, but at night active and noisy, especially on moonlit nights, travelling long distances if necessary, to obtain its nightly drink of water. Its food consists chiefly of insects, beetles, grubs, and earwigs, also  snails, slugs,  worms and small vertebrates ,such as mice and lizards when the opportunity arises.

Its note is a loud whistle with a tremelo and Charles Kingsley ,compared the cry of this bird to a weird laugh. In the evening when the birds come alive and are at their most active ,and their loud shrill cries uttered as they fly around, once gave the bird the alternative name of the 'whistling plover'.

It is generally thought to be an intermediary species between the Bustards and the Plovers, having several points in common with each. Apart from the colouring they have no relationship to the true curlews, hence the name is misleading. Owing to its extreme shyness it is difficult to spot, even for those acquainted with its habits.

Today they are considered to be a 'strange', rare summer visitor to southern England. In the UK its strongholds are in Wiltshire ,around the Salisbury plain and in Breckland, Norfolk. They arrive in March and depart in August/September.

The Stone curlew is a UK Biodiversity Action Plan species. Numbers have risen over the past fifteen years or so due to partnerships being created between wildlife conservation bodies and land owners to identify and protect breeding sites. The stone curlew breeds on semi-natural grassland,chalk downland,grass heaths and on agricultural land. It is associated with free draining stony soils and nesting occurs on stony ground,particularly with short patchy vegetation. On semi-natural grassland grazed by sheep and rabbits can provide a short sward suitable for their nesting requirements

Stone Curlews on the ground are hard to spot. 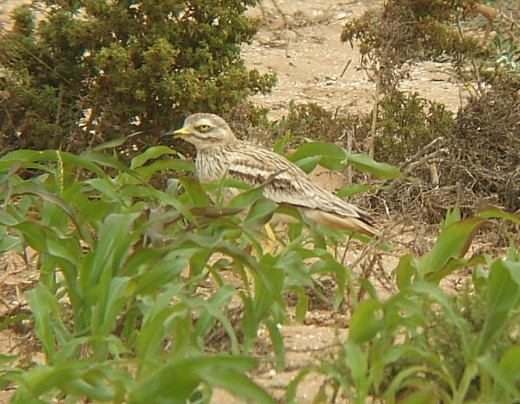 The nest of this species is a mere depression in the ground on some sandy or stony ground. The female will deposit her two eggs which are of a pale clay colour spotted and streaked with blue grey and dark brown.

The bird sneaks off the eggs in a crouching position, the moment any danger comes within sight of the nest. The eggs are well camouflaged and they and the resulting young are very difficult to find. The eggs blend in perfectly with the stony terrain on which they are so often laid.

The eggs are incubated for about twenty four to twenty six days by both parents. the chicks are capable of running round soon after they hatch. They become fully fledged in a further thirty six to forty two days. Should a brood be lost a replacement clutch is often laid.

The nestlings are entirely clothed being a sandy grey colour above delicately mottled with pale brown. The Under parts are a buffy white. On each side of the head, and down the crown, a black stripe and a similar one down the back bone and on each side of the body. The legs are blue grey.

The chicks improve their excellent camouflage by freezing, flattened on the ground when disturbed or threatened.

Chick of the Stone Curlew. Image taken in Israel. 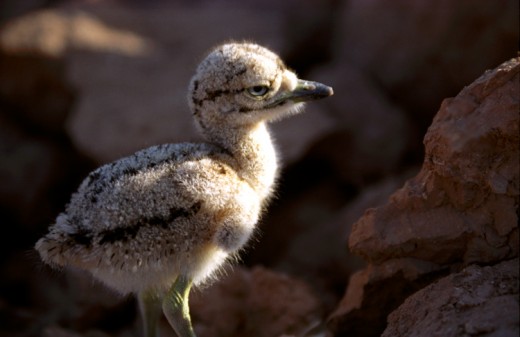 Threats to the Stone Curlew {UK}.

This rare summer visitor has seen a decline in numbers of over 85%,over the last fifty years or so, up to the 1990's. There has been a partial recovery.

The main causes of their overall decline are thought to be ;loss of semi-natural habitat through conversion to arable land and a decrease in grazing on remaining grassland. better crop husbandry has reduced the number of bare patches suitable for nesting and both eggs and chicks are vulnerable to heavy agricultural machinery.

Illegal egg collecting is a serious threat and disturbance from recreational activities are also thought to be a problem for this species. Predation by foxes has also increased in some areas inflicting heavy losses on chicks and eggs.

Wet springs and summers prompt grass growth and this makes it difficult for the birds to find insects on the bare ground, and the demise of set-a-side, where farmland is left uncropped ,has a significant impact on their breeding success.

Conservation efforts being made are having the positive result of a partial recovery, but much more needs to be done on behalf of the species. I can only hope that they are successful for the English countryside would be a poorer place without them.

The large eye of the Stone curlew. 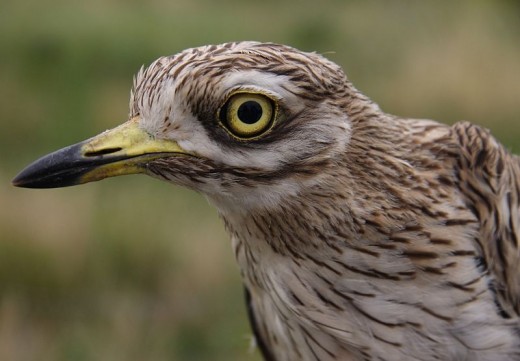