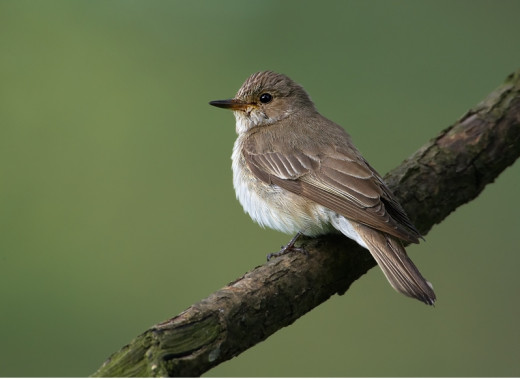 The Spotted flycatcher Muscicapa striate belongs to the Passeriformes {perching birds} order of birds and the family Muscicapidae within that order. The genus name of Muscicapa derives from two Latin words musca =a fly + capere -to seize. The specific name of striata also derives from Latin -stria =a line.

In the UK they are placed on the Red list of conservation concern and has been since the 1996-2001 assessment. This means there have been declines in population/distribution of over 50% in the last forty years or so. As such there is an action plan for the species which is currently being implemented on the the species behalf and try to halt and eventually reverse this trend.

The birds breed in Europe and west and central Africa and winter in Africa. They are birds of open woodland and gardens. 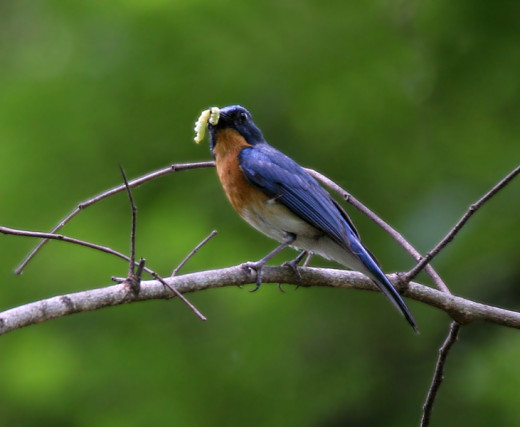 The Old world Flycatchers are a large family -the Muscicapidae, mostly restricted to the Old World { Europe ,Africa and Asia}. they are insectivorous as their name suggests taking insects on the wing.

They are divided into two sub-families the Muscicapinae the typical Flycatchers, which is split into many genera,our subject belongs to the Muscicapa,of which there are twenty three other species,including the Pied Flycatcher**.

The other sub-family is Saxicolinae,which also includes many genera one of which is Saxicloa,the Bush Chats and Stonechats**

The birds of the family Tyrannidae also referred to as the Tyrant Flycatchers are not related to the Old World Flycatchers.

Here we review the Spotted Flycatcher and as usual we commence with a description of the species under review.

** This species also features on this site. 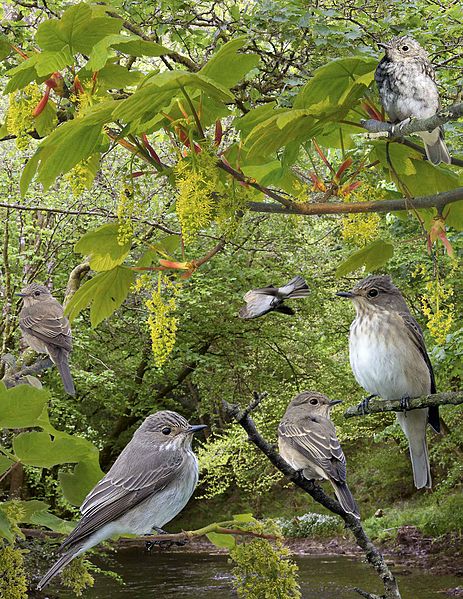 The plumage of this bird is very plain ,sober and unpretentious,they are about five and a half inches long. The bill is dusky,broad,somewhat flat and wide at the base,a ridge runs along the upper part and the lower mandible is yellowish at the base. The iris is dark brown the eyes are bold.

The head is brown the crown spotted with darker brown,the neck and sides,streaked with brown. The nape and the back are plain grey brown with pale feather edges on the wing. The under parts are a silvery whitish with soft pale grey brown streaks on the breast. They have short black legs. The long ,plain,brown tail tends to be held in a downward position. The wings are relatively long and narrow.

The juveniles have a spotted crown and cream spots on a brown back and the breast has a distinctly mottled appearance. They have a very similar plumage to a young Robin. The adults are somewhat similar to the Garden warbler**, but generally lighter in colour and longer tails.

** This species features on this site.

Here in the UK the Spotted Flycatcher is a relatively late arrival only reaching our shore in any significant numbers during May. The species is noted for it being solitary and less than striking appearance. Another evident characteristic is its habit of perching on the tip of a branch,the top of a stake or railing,where it keeps a watchful eye on any hapless flying insect that may pass its way.

When it is so perched, it gives the general appearance of it being uninterested and listless,then with a sudden dart,it is off after a fly or other morsel and the 'snap' of its bill informs that this little bird has been successful in procuring its victim. Once the insect is secured in its bill, it returns to its original perch ,or at least one that is close by to it after its short sorties.

In these more enlightened days it is realized that the Spotted Flycatcher is of great help to the gardener ,especially fruit growers,by taking all manner of harmful insects in great numbers.This has not always been the case and the bird suffered persecution from gardeners who thought that they did damage to their crop.

The note of the Spotted Flycatcher is a weak chirp. 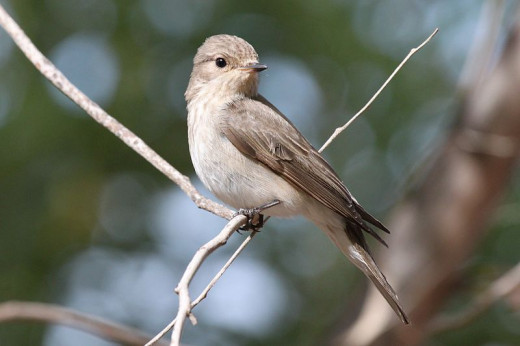 Originally posted to Flickr ,uploaded to Commons by Magnus Manske. 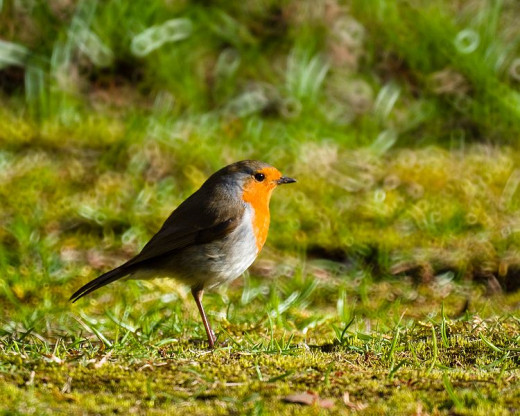 Source: This image is courtesy of David Croad. CC BY -SA 3.0 unported license

In the days before it became illegal to keep wild birds in captivity with a few licensed exceptions,it was a popular pastime. Bird-catchers made a good living by procuring birds by any means, usually with nets, they sold them to bird keepers and to the markets as food. the following few paragraphs relate to this time in our avian history.

During my research I came across this record which contained some curious circumstances. Young Flycatchers were taken from a nest and placed in a large cage,with some other birds of different species,among which was a Robin. The writer states,

" The young birds were fed regularly by one of their parents-the female,while her mate,who accompanied her constantly in flight,used to wait for her,outside the window,upon the roof of the house,or in neighbouring trees. Sometimes the little birds were on the top perch in the cage,and not always near enough to the wires of the cage to be within reach of the parent,when she appeared with food."

" The Robin which had for some time been an inhabitant of the cage,where he lived in perfect harmony with all its associates,and had from the first taken great interest in the little flycatchers,now perceiving that the nestlings could not reach the offered food,but sat with their wings fluttering,and their mouths open,anxious to obtain it,flew to the wires,received the insects from the mother bird,and put them into the open mouths of the nestlings. This was repeated every succeeding day,as often as his services was required"

Another Bird keeper, laid down these notes for posterity.

" A young Spotted Flycatcher was brought to me,it had flown against a lamp,was temporarily stunned and a lad picked it up without difficulty. I tried to keep it, but it refused to feed,as most birds do after they have left the nest,and although I forced it to eat it died the next day. Perhaps I lost nothing to the death of the bird,for the Flycatchers are not especially suited to cage or aviary life,are neither attractive in plumage or song,and are said to be delicate and difficult to keep in health."

The writer continued-" If reared from the nest they would doubtless eat the usual soft food, but I would expect them to follow the examples of the Swallows and Martins, eat to repletion and take very little exercise. They have been kept { in 1887,1895 and 1896,examples were exhibited at the annual Crystal Palace show in London}, but it may be questioned whether it is worth the trouble"

Keeping wild birds was once a popular pastime. 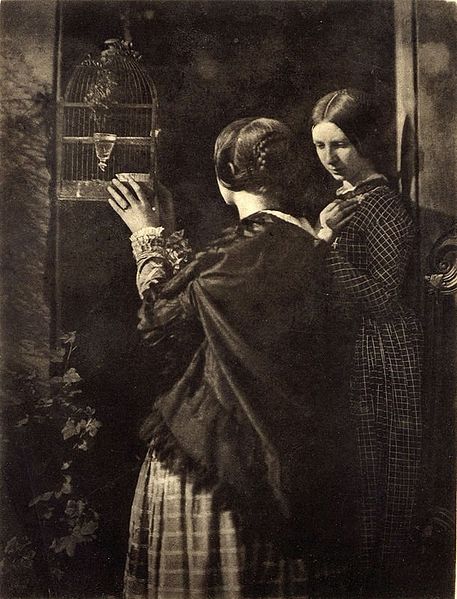 Nesting commences almost as soon as the birds arrive. It is probable that they have paired up prior to arrival. If this is not the case it occurs shortly after they arrive. The nest id usually built at the beginning of June and is composed of various materials,such as twigs, catkins and moss lined with feathers,hair or down and strengthened somewhat with cobwebs. They tend to return to the same location year after year if they have been left unmolested. The nest is often easy to locate as it seems there is no particular attempt by the birds to conceal it.

A favourite location for the nest of these birds is a tree growing against a wall, trees themselves,ledges of rocks,holes in walls, the exposed roots of a tree over a bank,or even a beam in an out building,which gave the bird one of its old country titles of -Beam bird. Although nests may be encountered later in the year it is probably because the birds lost the eggs in the first clutch and a replacement clutch was needed. The female seems to be the main builder of the nest while the male helps to gather the required materials.

The eggs are a dull white spotted with a pale orange coloured brown. Four to five are generally deposited and they are incubated by the female for a period of 13-15 days. They are fed a nutritious diet of insects, the parents bring two or three insects at a time, and are ready to leave the nest in a further 13-16 days.

When the young leave the nest they are tenaciously attended to by the parents . they often sit together in a row,upon some branch or fence,while the parents procure them flies and other invertebrates. Once they have become independent it is not long before they are ready to leave our shores and head back to Africa to spend the winter. 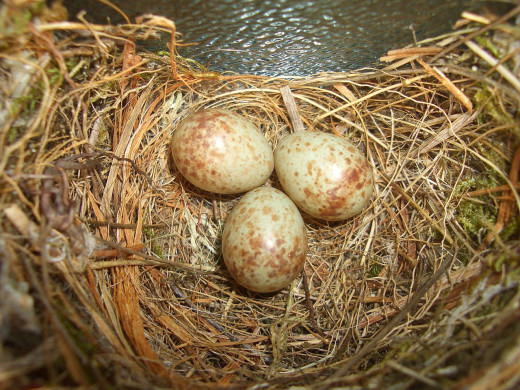 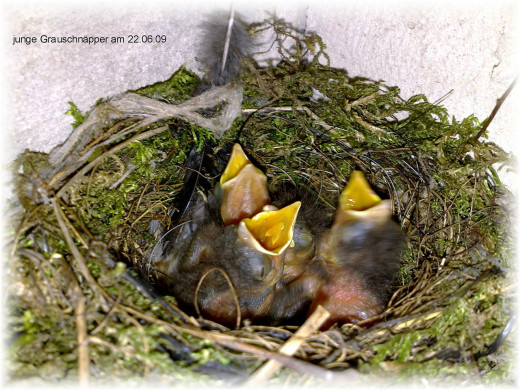 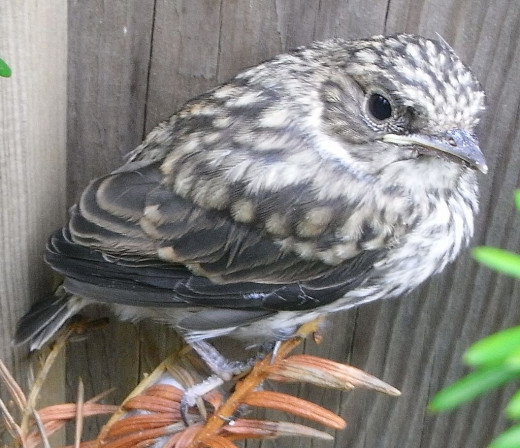 UK- Red list- due to declines of over 50% in population/distribution over the last forty years or so.