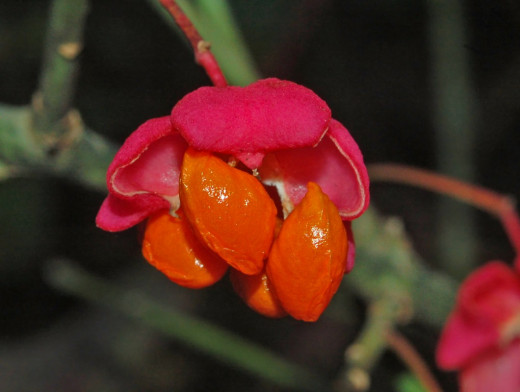 It is the intention of helping those who are not familiar with trees to pick up a few identification clues that will further their knowledge and make identifying the tree species a little easier.

Many people begin to identify trees by the shape and colour of the foliage, is fine during the summer months but of little use when the foliage has dropped from their arboreal mothers and e branches are left naked and bare during the winter months. Yet every tree has a character{s}that will help the observant to identify the species even during the depths of winter.

Here we review the Spindle tree and with the aid of photographs and images along with a descriptive text recognizing this species should become a little easier.

Basic components of the Spindle tree. 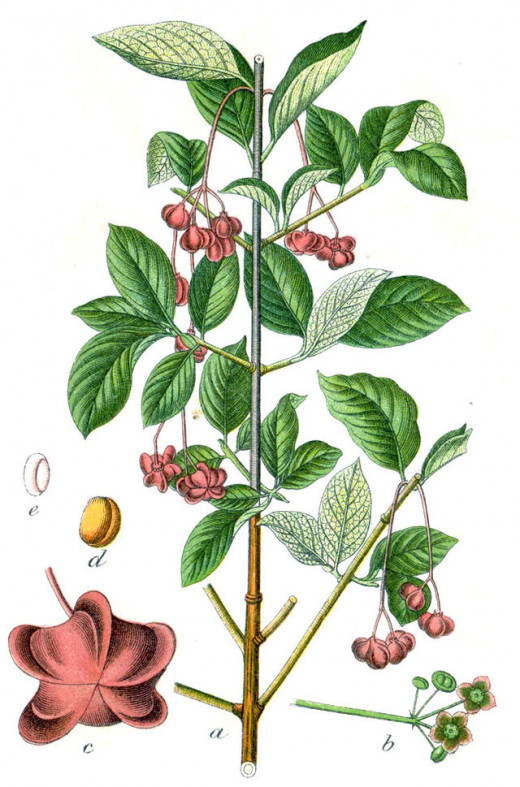 The Spindle tree Euonymus europaeus belongs to the family Celastraceae. It is perhaps to its comparative rarity that the spindle tree is not more appreciated for its beauties than it is. It is generally little more than a shrub,seldom exceeding ten to twelve feet in height when in the wild state. However, under cultivation it may well attain the height of thirty to thirty five feet with a trunk of a foot to eighteen inches in diameter. The bright colouring of the autumn fruit,however, does draw attention to it even where it is represented by a few small bushes.

This species is one of the many that belong to the genus Euonymus which with other genera constitute the family Celastraceae. This order of woody plants,have simple leaves and small flowers.The affinities of the order seem to be most close to that of the Vines and Virginia creeper on the one hand and that of the maples** and sycamores on the other.

The genus name of Euonymus derives from the time of Theophrates,and signifies 'well named' from its bad rather than good qualities. The Ancient Greeks called their avenging deities , or Furies, the Eumenides or 'Kind folk', and their mother Euonyme { her whose name is good}, from the smell emitted by the whole plant when bruised,and from its poisonous though lovely fruits, the Spindlke tree has apparently,been given the name of this dreaded being.

Euonymus europaeus is also a native of western Siberia, North Africa and the whole of Europe from Sweden to Scotland to the Caucasus. The common name of Spindle tree,in France the 'Fuusain'and Germany 'Spinddelbaum' all refer to its wood being used for the purpose of producing spindles,which were commonly utilized where hand spinning was an industry. The old English name of 'prick-wood' used by Gerard and the French 'Bois-a-lardoire' allude to its employment for skewers or 'larding pins'.

The Old French name 'Bonnet de Pretre',alludes to the resemblance of its four-pleated capsule to a Priest's biretta, and the Flemish 'Kardinaalsmuts' referred to the colour also, is even more appropriate.

A good deal of confsuion seems to have arisen in popular parlance between this species and the Cornel,Cornus sanguinea {Dogwood}, Both trees being of about the same size,having opposite leaves, hard tough wood,which produced good charcoal and easily bored longitudinally and the acrid astringent properties in the leaves and bark.

Both trees were once referred to as Gaten or gaitre tree and as Dogwood. The word Gatr a later word for Gaitre,apparently meant a cover,and supposedly referred to the capsule hanging when burst like a coverover the seed. if this is the case the name must belong to the Euonymus and has only been extended to the Cornus by mistake. It may however, allude to the use of the shoots of either tree [about four feet long},as stems for earthenware pipes, for which purpose they were readily bored and employed in Russia and German 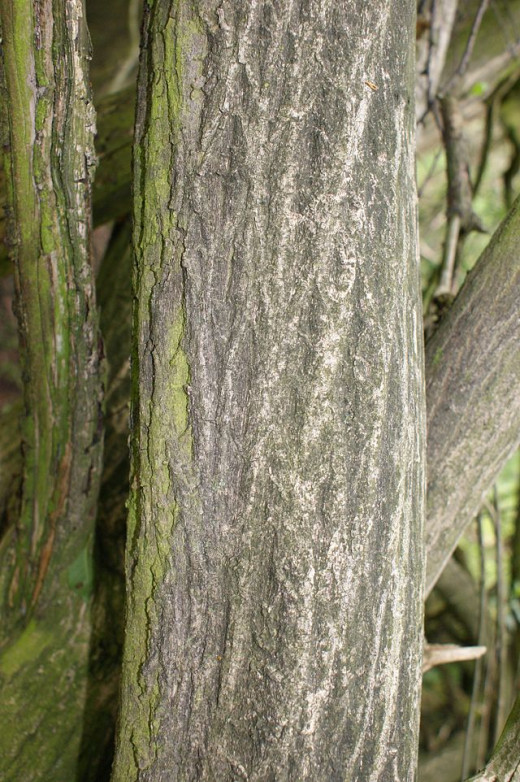 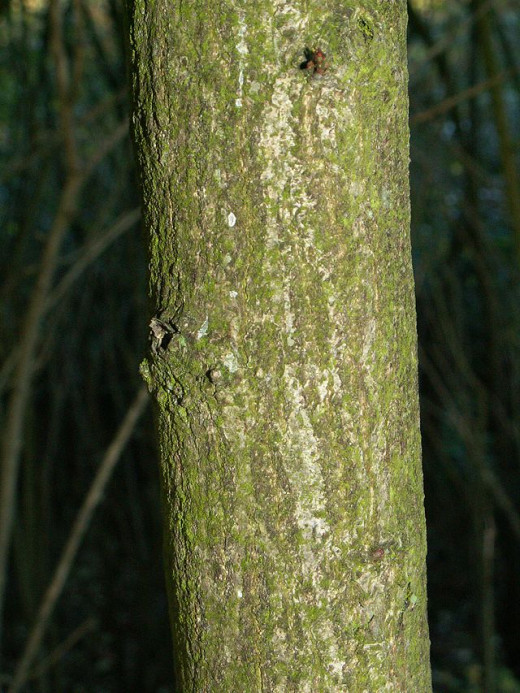 Here in the UK the smooth bright green shoots and leaves in summer,and its rose red capsules in Autumn were not uncommon objects. The whole plant is remarkable for its smoothness,for even when the young green wood becomes grey from the development of cork beneath the epidermis, and the bark retain an even surface.

The shoots are matt green,and give off a fetid odour when bruised,and are bitter to the taste. They contain an irritant poison known as Euonymin. Four distinct wings give the twigs a four sided character and the sub-opposite ,short,egg-shaped, pointed buds, which are pressed against the branch,are also slightly four angled. 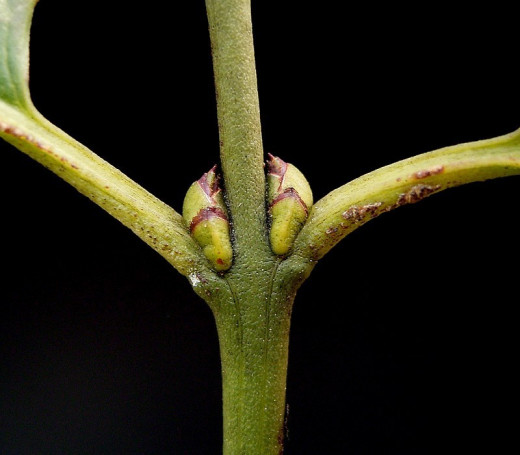 In April they sprout their pairs of delicately glossy,oblong-lanceolate leaves of a rather deep shade of green,each leaf being shortly stalked. The leaves are from two to three inches long, minute teeth at the margins and a tapering point.

The midrib of each leaf gives off about eight pairs of divided secondary veins which curve forward and loop on to each other, the network of finer veins are not conspicuous.

About a month after the leaves have opened and in the axils of the leaves appear the few flowered clusters. The flowers are small and of a greenish white colour {pictured above}. The sepals and petals may be four or five in number and are arranged in loose clusters. 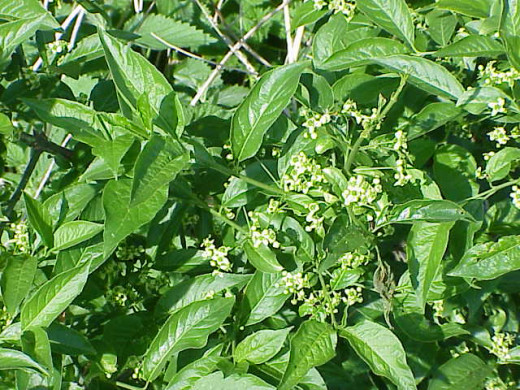 It is not until later when the year begins to wane that the spindle tree displays its red charms. The foliage often turns crimson in the autumn , but the fleshy,four-lobed fruit is the most distinctive beauty of the tree.

The lobed fruit becomes a beautiful rose red colour,characterized by an outgrowth from the coat of the seed known as an aril in botanical parlance. The function of the structure is apparently to render the seeds more attractive to birds, and thus are more widely distributed by means of their droppings. 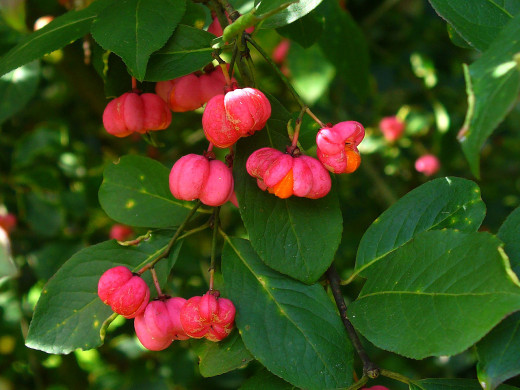 The beautiful fruits caught the attention of poets.

The beautifully coloured fruits were bound to attract the attention of poets and artists. In a short poem called 'A Dedication', Tennyson pens the following lines on the spindle tree.

" Take this,and pray that he,

Who wrote it,honouring your sweet faith in him,

May trust himself;and spite of praise and scorn,

As one who feels the immeasurable world'

Attain the wise indifference of the wise;

And after autumn part-if left to pass

His autumn into seeming leafless days-

Draw towards the long frost and longest night;

Which in our winter woodland looks a flower"

Other species and horticultural uses.

A variety with broader and more glossy leaves and larger fruits,is ranked as a separate species under the name of Euonymus latifloius,is well worthy of cultivation, not only in shrubberies,where it associates well with the white fruited kind for autumnal effects, but also as a standard on a lawn.

Unquestionably the most familiar species to the gardener id the Japanese spindle tree Euonymus japonicus,which was introduced in 1804,which with its more decidedly egg-shaped leaves with scalloped margins, thrives in the sea breezes of the more southern regions.

The foliage is often ornamentally variegated with white or yellow,and is hardy enough to sustain but little damage even in severe winters and it is said that it could 'withstand the fatal smoke of London' 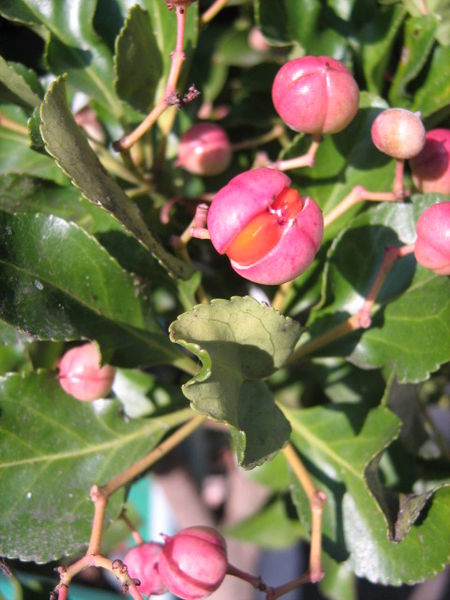 Source: Courtesy of Enr-v , who has placed it in the Public domain 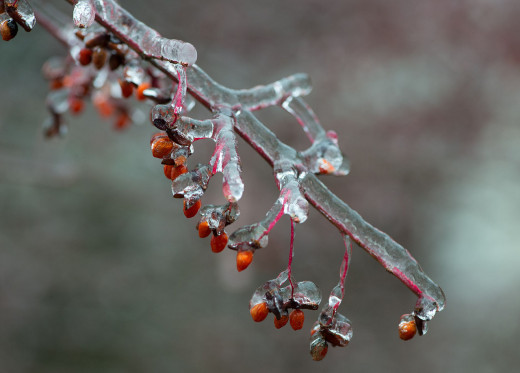 In the USA Euonymus atropurpureus, also referred to as the Burning bush or Wahoo is the spindle tree most frequently found in the form of a tall shrub.In his book Familiar Trees and their Leaves' { 1896} Ferdinand Mathews states, " the minutely toothed leaves are about the colour of Holly, about two-to five inches long,and in the autumn they turn pale yellow. The flowers which appear in June have a four parted appearance. The rounded petals are deep purple. The fruit which ripens in October is also four parted and hangs on long,slender stems. It is half an inch broad, light magenta-purple in colour and imparts to the tree a very ornamental appearance in autumn. The burning bush grows wild from western New York to Wisconsin, Nebraska, Indian territory, and southward to northern Florida" 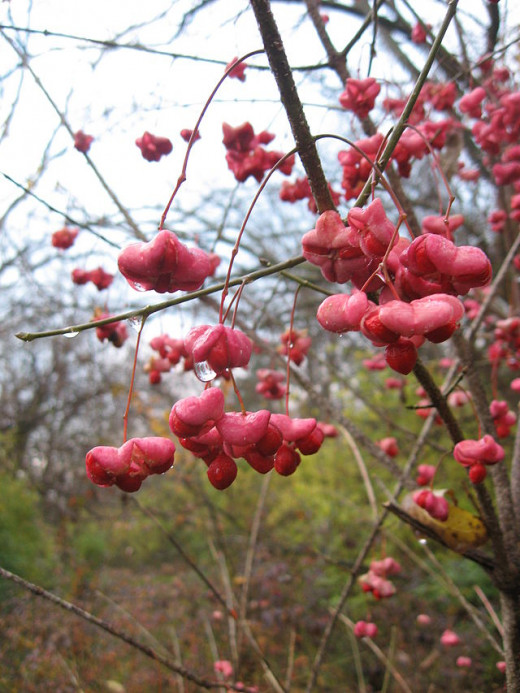 Source: Courtesy of Mason Brock who has placed it in the public domain