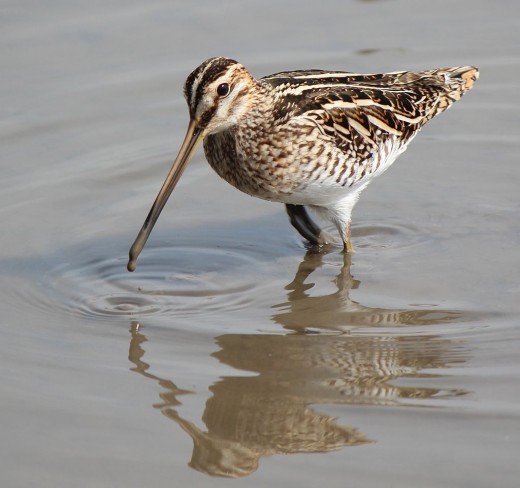 The Common Snipe belongs to the Order of birds known as the Charadriiformes and the family Scolopacidae within that order. The scientific name derives from Latin gallina meaning a hen.

In the UK it is placed on the Amber list of conservation concern {declines of between 25-50% in population/distribution over the last forty years or so} ,the listing is due to declines in Europe. The UK population is estimated at 76,000 pairs in summer and one million birds in winter. In Ireland it is also Amber listed for the same reason.

The birds breed in Europe,northern Asia and winter south to Africa and central Asia and north South America. They are a bird of wet grassland in the breeding season they are common in bog marsh,grass heathland,moorland and along streams. they may be encountered along the seashore in the winter months.

The Croatian name is barska sljuka, the Gaelic name is Naosg, the Irish Naoscah,and the Welsh Gach Gyffredin. 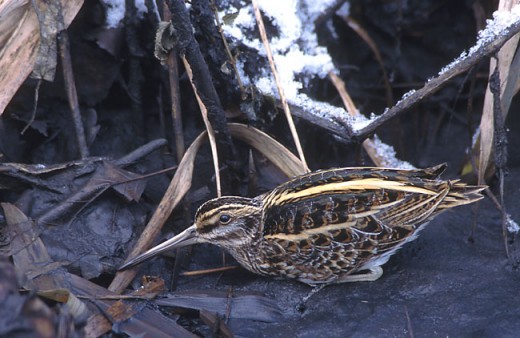 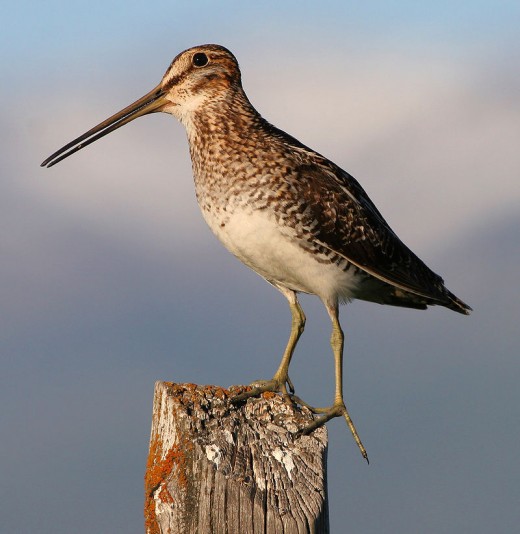 The birds breed in Canada and the northern USA.

Snipes are wading birds belonging to three genera and consists of about 25 species in the family Scolopacidae. Their main characteristics are their long straight bills and excellent camouflaged plumage.

The three genera are Coenocorypha, Lymnocryptes and the genus our species belongs to Gallinago. Those of the Coencorypha are collectively known as the Austal or New Zealand Snipes and they are a genus of very small birds of the Sandpiper family of which there are about 12 species. The genus Lymnocryptes has only one species ,the Jack Snipe,which is smaller than the common Snipe,and differs with features such as its sternum making it quite distinct,from other Snipes and Woodcock. {Pictured above}.

The genus Gallinago consists of about 17 species that occur in the world such as the South American Snipe Gallinago paraguaiae,the Andean Snipe G.jamesoni and the Giant Snipe,G undulata, which has its common name suggests is the largest Snipe,a stocky wader that breeds in South America,and Wilson's Snipe G.delicata which is now considered to be a sub-species of the common Snipe.

Here we review the Common Snipe and as always commence with a description of the subject under review. 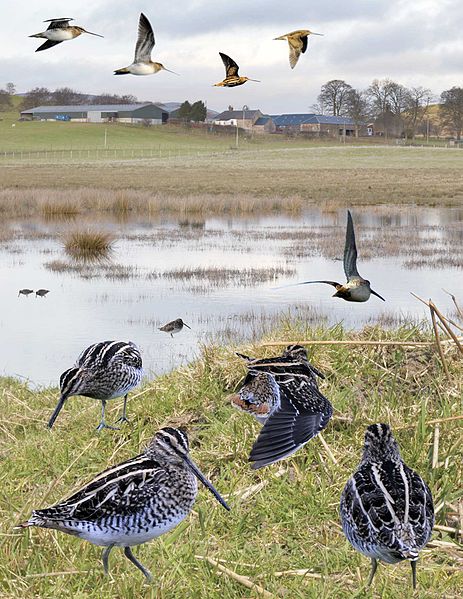 Description at a glance- The bird has a disproportionately long,straight bill easily visible in flight. It has a series of dark brown,pale buff and black stripes and bars on the head and body.It has excellent camouflage colours and is rarely seen unless flushed out,when it flies away in a rapid zig-zag flight pattern.

In More detail- the adult has a brown bill almost three inches long,darker at the tip. The iris is umber. The head and neck light brown darker on the crown and hind neck. There are four dark brown lines from the bill,one through and over each eye. The back is prettily mottled with chestnut,clay brown and black.

There are long buff,outer borders to the scapulars and tertiary feathers. The wings are dark grey brown,median coverts mottled with two browns,like the back. The greater coverts and secondary feathers are white tipped. The first primary feathers with the outer web except the tips,creamy white.

The tail has fourteen feathers mostly black, this colour decreasing in area outwards till only black bases are left on the outer feathers. A broad sub-terminal bar to the central feathers,followed by a narrow dark brown one and a reddish white tip. The outer feathers are much more barred,the chestnut becoming a speckled grey brown.

The chest and sides of the body light brown,spotted with dark brown. The belly is white. The under tail coverts rusty,axillaries white,narrowly barred with black. The feet and legs greenish brown.

The young birds are dingier in hue,and the chestnut on the back is duller,but greater in extent.

Even during the 1800's there was concern about the decrease in numbers in England due to the birds breeding grounds being drained and brought under cultivation. The species requires suitable quarters where it can find peace and quiet.

Snipe frequents riversides, Willow 'osier' beds and marshes. They feed by probing the wet soil with their bills. They locate their prey by 'feel' even the slightest wriggle of the smallest of living creatures will be detected and eaten.

During the day the Snipe was often encountered in turnip fields when the ground was tolerably wet.they may also be seen in the vicinity of sewage works,where the rank vegetation affords them cover and abundant food,and the ground is always soft and wet.

Records reveal that the Snipe gained a variety of names through its peculiar habit of what is referred to as 'drumming' of the Snipe,a bleating sound that occurs when the bird is on the wing in the breeding season,these include, 'heather bleat' in Scotland, 'Moor lamb' in Lincolnshire,,'chervre-volant' in France and himmelsgeiss' in Germany. Some likened the sound to a horse's neighjing,which gave the bird of 'horsgok' in Denmark and hrossagaukr' in Iceland, both mean Horse Cuckoo.

When the bird utters this sound it flies in large circles at a considerable height. There seems to be two stages to this performance. During the first stage the bird gradually ascends with full wing strokes,and quite silently,or uttering at intervals the usual note it does when flushed. In the second movement it gradually descends with short,tremulous beats of the wings ,accompanied by a loud 'bleating' or 'drumming' sound,which is audible at a fair distance,it has been said that it can be heard when the performer is so high as to be invisible. After a few seconds the rapid ascending movement is repeated,and then the descending bleat,and so on which may continue for up to an hour or more. 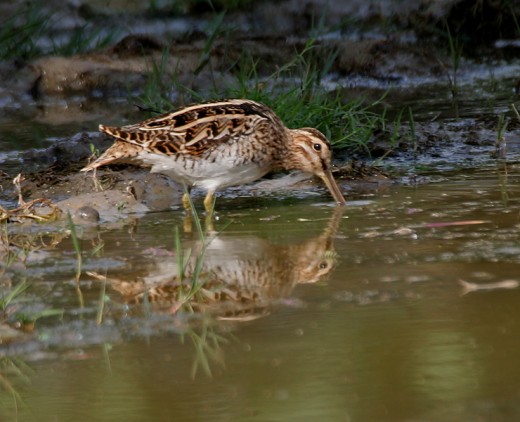 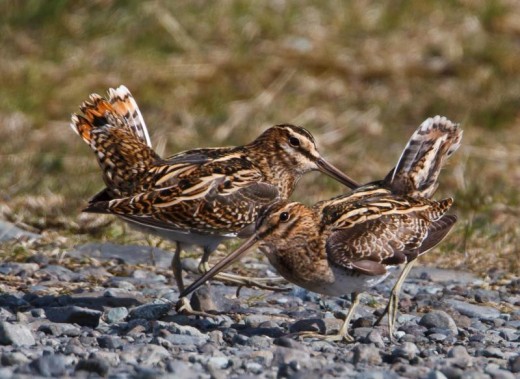 In the Book 'British Game-birds and Wildfowl' ,1855, it states " The Snipe is generally considered a difficult shot,but this arises in great measure,from the sportsman firing at it during the zig-zag flight,when the chances of hitting it are extremely small. The proper time to fire is either immediately the bird is off the ground,and before it commences its eccentric movements,or just after it has concluded,and its commencing its proper and steady flight."

The author goes on to give the following advise. " To aid in finding Snipe a good pointer or setter dog is desirable. When a Snipe is shot,the gun should be reloaded before the Snipe is picked up,for it very frequently happens that in walking up to the dead Snipe,another is put up,which if you are unprepared ,escapes."

A writer in 'London's Magazine of Natural History" for 1829,relates " In the latter end of October and during the month of November great numbers frequent the Broads,which within this county {Norfolk east England} abounds. They rest on beds of watercress and other aquatic vegetation. On this floating vegetation they rest in large numbers and are approached only by means of a boat"

" In the early part of the morning,when the whiteness of a hoar frost renders the Snipe visible, the marsh men secrete themselves in a small boat behind neighbouring reed bushes,and shoot at them sitting upon the broken reeds,and have sometimes the good fortune to kill many at a shot. In the latter part of November they gradually take their departure,and,except for a few stragglers,are not to be met with before the months of February and March in the following spring."

In Sporting phraseology it was said that ' We spring them' when they were flushed. 'We talk of a couple or a couple and a half of Snipes' and when in small flocks 'We say a wisp of Snipes'.

Another author claimed that the Snipe is easily tamed and C,Cogswell Esq, gives the following account of one which he kept for some time in captivity. " On the 30th of October,1847, while some men were out in the fields amusing themselves by catching small birds with a fly net, they secured a full grown Snipe.,which came in to my possession on the following day. The head was partially denuded of feathers,in consequence of the bird having struggled against the bars of a cage,through impatience at being confined. However, it made no attempt to escape when held in the hand,and would even stand quietly on the knee,drink water out of a glass and take up worms from the bottom."

" I have now had the singular pet for more than two months,and, in all appearance,seems perfectly reconciled to its novel mode of life. During the l;ate continuance of severe frost,there seemed a probability of its dying from hunger,as earthworms were not to be procured,and,at first refused to take any other kind of nourishment. However,necessity soon prevailed,insomuch that the raw flesh of a hare and rabbit,together with trip cut into narrow strips,have been taken in favour,but the ordinary kinds of 'Butcher's meat' are rejected. Earthworms remain decidely the favourite article of food,and of these it consumes a quart in three or four days"

" The habits of this creature are surprisingly familiar,considering,its commonly supposed irreclaimable nature. During the night it reposes quietly in its cage,standing on one leg,with the head under the wing. By day,however, a desire to be enlarged is signified by an incessant striking of the bill and head against its prison wires. When released,it flies about the rooms and passages,walks on the table,is pleased by being noticed by those around him, and is on terms of great intimacy with a little Spaniel lap dog "

" No situation seems to accord so well with the animals ideas of comfort as a place on a stool before the fire. This accommodated to its liking,and especially fondled with the voice and hand,or enjoying the close proximity of its canine associate,it emits a subdued whistling note,but very rarely varied with an approach to a twitter. It likes to be kept clean,and devotes frequent attention to the smooth and orderly appearance of the plumage."

Egg of the Snipe. 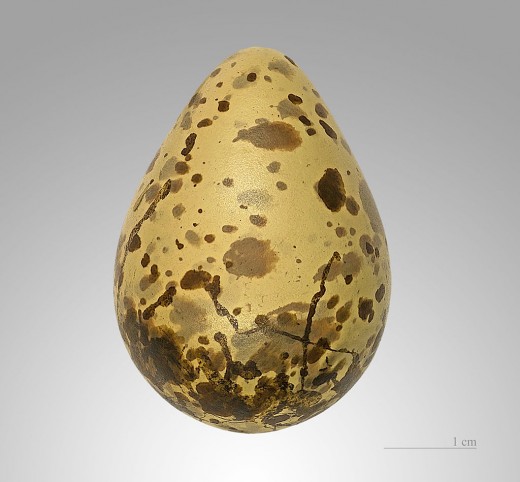 Paring of this species takes place very early occasionally as soon as the end of February or the beginning of March, but usually not until the end of the latter month. The nest of the Snipe is a mere hollow usually among grass,often on a rushy tussock,lined with a few pieces of grass or leaves.

The female will deposit four eggs which have a ground colour of a light olive -buff or greenish buff,boldly marked with purplish grey and rich dark brown blotches and spots ,chiefly at the large end.If by any chance they loose the first clutch a fresh nest is usually made and often only three eggs are laid into it.

The eggs are incubated for a period of eighteen to twenty days by the well camouflaged female and the chicks become independent in a further nineteen to twenty days.As soon as the young birds hatch they are able to run about and follow the mother.

Illustration of Snipe with chicks. 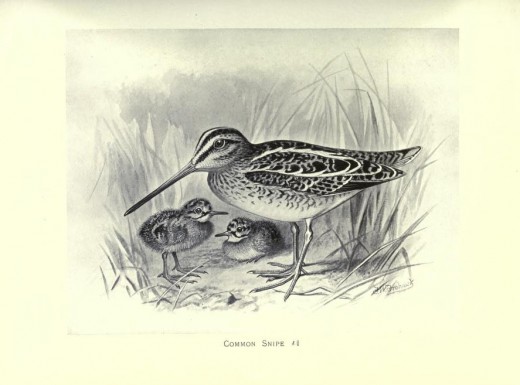 Public domain courtesy of the BHL.

The chicks are lovely little creatures,of the most delicate chestnut brown above,mottled irregularly with black,and varied with soft grey tips to some of the downy plumage. The throat is pale brown,chest ruddier. The belly grey-brown. The iris is very dark brown,feet and legs are a yellowish brown colour.

UK- Amber listed due to declines in population/distribution of over 25% in the last forty years or so.