Sticklebacks belong to the Order Gasterosteliformes and the Family Gasterosteidae and the genus Gasterosteus. The archaic naturalist Yarrell stated that there was six species which were considered at that time to be-The three spined, the rough tailed, the half armed, the smooth tail, the short spined, four and ten spined.

Day in his book 'The Fishes of Great Britain and Ireland' gives only two species Gasterosteus acuteatus , the three spined stickleback and g.pungitius the ten spined stickleback and makes six varieties- G trachurus, G.semicoloralis,G.siimiarmatus distinguished by the want of defensive plates along the sides of the line-a very common variety, G.gymnunus, the lateral plates extending no farther than the end of the ray of the pectoral fin,G. brachycentrus with very short spines, found chiefly in Ireland and the four spined G.spinulous.

As we look at the perception of these fish through the eyes of past writers, we come upon some fascinating statements, as for an example, in his book 'The Riverside Naturalist' 1890, the author Edwaed Hamilton, states that one Mr Buckland writes " A banstickle which I kept for some time, did on the 4th of May devoured in five hours time 74 young dace, which were about a quarter of an inch long, and the thickness of a horse hair. Two days later after it swallowed 62, and would, I am pursuaded have eaten as many everyday could I have procured  them for it" He continued to say " A notion may be had of the vast shoal by saying a man employed by a farmer to take them, has got for some considerable time four shillings a day by selling them at a half penny a bushel"

A similar phenomenon  was observed in April 1909 at Whittlesay for Mr. JE Rowel who wrote to the Fishing Gazette, " Vast hordes of three spined sticklebacks had lately shown themselves in rivers and canals in the neighbourhood, although previous to this visitation they were scarcely known in the area, probably these enormous migrating shoals came in from the sea"

According to Smitt, in the late autumn the three spined stickleback roam about in large numbers. The three spines sticklebacks live in shoals and sometimes very large, and as an example of these extraordinary numbers attained I quote Pennant who in 1776 wrote-" Once in seven or eight years, amazing shoals appear in the Welland and come up river in the form of a vast column. The quantity is so great that they are used to manure the land and trials have been made to get oils from them"

British Freshwater Fishes 1911---- states " Sticklebacks are the smallest of Britain's fresh water fish, however, they are a very interesting species, because of their breeding habits and for their diverse variety, which has been the cause of divided opinion as to the number of species which should be recognised. The stickleback family comprises of five genera, each of them with one or at most a few species. Two of them are north American and a third the 15,spines stickleback, although British is strictly marine."

Gastroteus aculeatus the three spined stickleback or the common stickleback has acquired a host of country titles over the passage of time, such as, prickleback, tittleback, jack sharp, prickly and stickling.

It never attains a greater length than four inches and often is only half this length. It is found in rivers and on the coasts of the Arctic and temperate regions of the Northern Hemisphere. It is recorded from as far north as Greenland, Alaska, and Kamchatka {far east Russia} and ranging southwards to Japan, California, New Jersey and Spain. 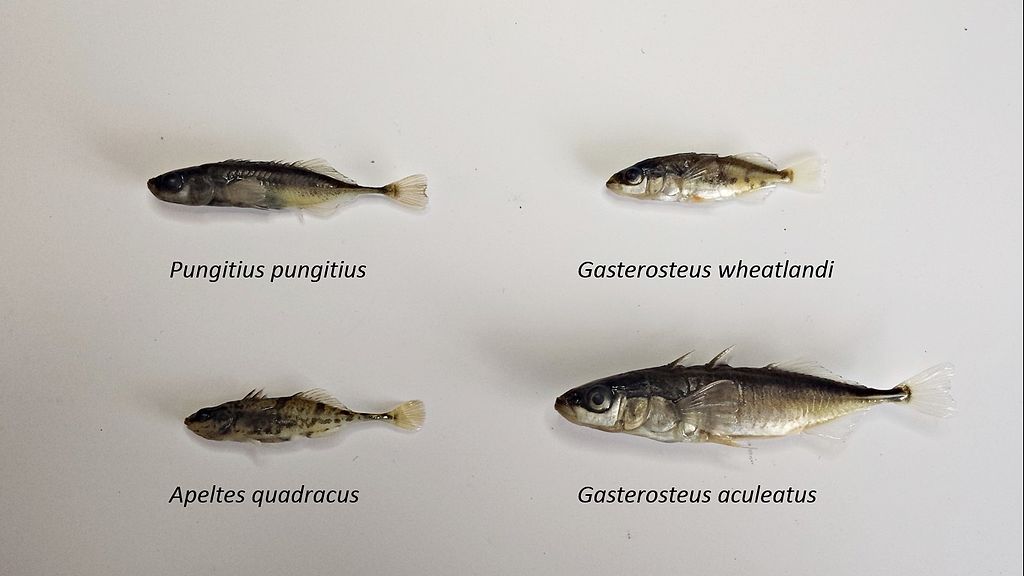 The three spined stickleback has the body compressed and fisuifrom with the head conical and the caudel penduncle slender. The mouth is small, and the jaws adorned with narrow bands of sharp teeth. The gill openings are restricted to the sides. The dorsal fin is composed of three rarely two or four spines.

Although insignificant in size the three spined stickleback is a bold fish, often attacking larger fish than themselves. They also feed on shrimps, insects and worms and they are especially destructive to the spawn and young fry of other fish. The tenacity with which they hold on to anything they may have seized often causes their downfall. In my younger days a stick with cotton on one end and a worm tied to the other procured many sticklebacks which would not let go of the worm.

BREEDING -----The three spined stickleback breeds in the spring or summer, the time of spawning varying considerably in different years and according to locality. During the breeding season sticklebacks change their colour, the females becoming darker down the sides extending down the sides in the form of vertical bars, while the lower parts change from a silvery white to a pale yellow and a brilliant red in the male.

The male select suitable places for constructing their nests, such as quiet shallows, or rock pools which are only reached by the sea at high tides. each choose a spot at some little distance from its neighbours, and, commences building the nest. The male first collects together pieces of roots and stalks of aquatic plants and fixes them to the bottom. he then commences to build them up, and cements them together by means of threads produced by mucous secretions from the kidneys.

The nest is constructed with great care and is fixed to the bottom by means of sand and pebbles. the completion of this task can take several days. On completion the structure is usually barrel shaped and may be over an inch in diameter with an opening at one end.  there are on record specimens found of domed shaped nests with openings at the top, but these are not common. the male guards the nest and eyes any intruder that approaches, seeing them off if any come to close.

Once the nest is completed to his satisfaction, the male turns his attention to attracting a female. Once a female is selected he guides her to the nest by swimming around her and manouvering her with his snout, or, should she need a little more persuading  he will readily use his spines.

When the female has submitted and enters the nest she lays a few eggs. After her task has been completed, she bores a hole on the opposite side to the entrance and takes her leave. She will have nothing more to do with the eggs or the resulting young. Immediately after the eggs are laid the male enters the nest to fertilise them. Within a matter of hours the male goes in search of another female, and this is repeated many times until their are sufficiently numerous.

During this period of nesting and finding females that will procure enough eggs, the males become increasingly jealous, and often indulge in fierce duals with other males, the two rivals rushing at each other, using their spines as dangerous and sometimes lethal weapons. After a few of these violent attacks, and if both combatants have survived, the victor indulges in splendid displays of colour while the vanquished become dull. when spawning is over the male guards the nest and protects the eggs, continuing to attack any intruders. With his mouth he diligently repairs any damage to the nest.

He also refreshes the water inside the nest by placing himself in front of the opening and vibrating his pectoral fins. When the eggs hatch out he destroys the nest leaving only a sort of cradle which he continues to guard. As the young are strong enough to move around they may try to leave the security of the nest cradle. the male will find them and take them in his mouth to convey them back to the place  where they are more secure. Eventually his parental care diminishes and the young are left to have their independence.

The ten spined stickleback was sometimes referred to as the Tinker. It differs from the former species, particularly with the more numerous dorsal fin spines, which can vary in number from 7-12 { which caused indentification disputes in the past, and the wider gill openings. it is a smaller fish than the former only ever attaining a maximum length of three inches {7.5cms} and again only attaining half this size in many cases.

The colour of this species varies considerably, but is usually a shade of olive green powdered with tiny black dots which often form irregular bars. In the breeding season the males are darkish brown. the habitat is similar to that of the three spined stickleback.

it spawns in small streams where the shoals crowd close to the bank. The nests are not placed at the bottom as in the former species but are attached to aquatic weeds or grasses.

Sticklebacks are eaten by larger fish,water birds and the kingfisher who is expert at catching these small fish, which it does in large numbers.

The kingfisher is excellent at catching sticklebacks. 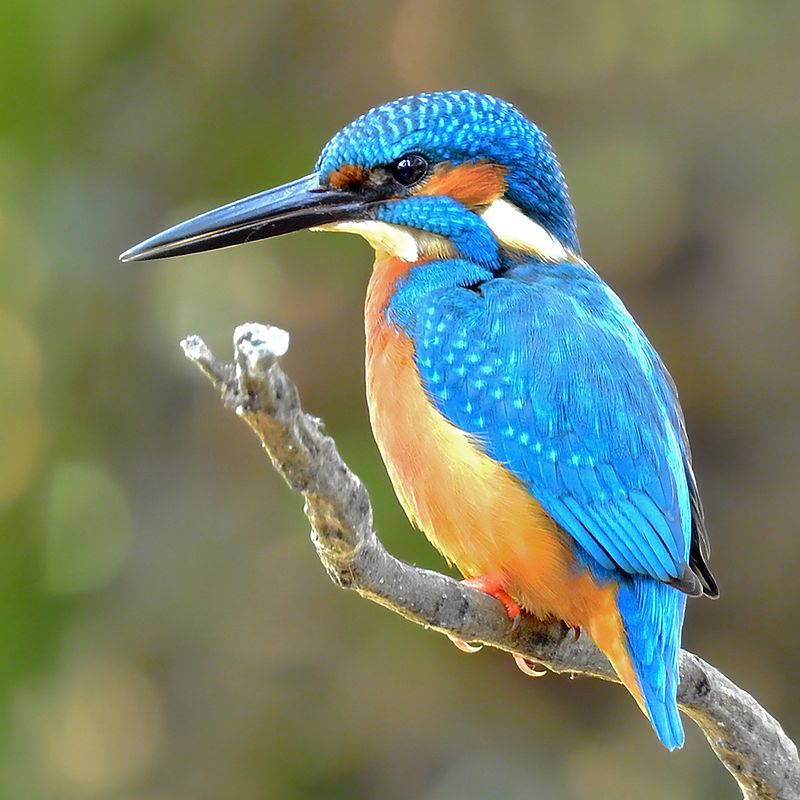 The name of the relevant author must be attributed along with any relevant license.