When most people I know are asked the question, what is wildlife ?--their normal answer is animals , usually large mammals such as those that occur in Africa, particularly lions and cheetahs, or, here in the U.K.,foxes, otters etc, which is of course correct. However, wildlife includes any fauna and flora that is not domesticated and occurs in its natural habitat.

These vary from the tiniest of creatures, many of them, not even visible to the human eye, to the largest of beasts that roam the Contintents that make up the land mass of our planet. Here we are to review some members of insect land that belong to the Order,Hemiptera, that occur in the U.K.  They are usually referred to as shield bugs or stink bugs. The latter because they are capable of discharging a foul smelling liquid to deter predators, making the title an apt description. However, unless one handles them roughly you are unlikely to be a victim of this phenomena. Personally I prefer the former name of shield bug which derives from the shape of their bodies. They may be encountered in a variety of habitat where they appear on trees, shrubs and other herbage of their choice.

One of the commonest species of shield bug that occurs in the U.K. is the green shield bug Palomena prasina and this is the species I encounter most often. it lives on a variety of host plants including trees and shrubs. It is around 12-13mm long and of a medium green colour without any substantial markings. the adult season is from May -July and again from September - October. The second generation turn into a bronzy green colour before hibernating for the winter. When they emerge the following spring they are adorned in a deep bright green colour. They are common in England and Wales but they tend to be much rarer in Scotland.

Below--shield bug on the trunk of the horse chestnut tree.

The Hawthorn shield bug Acanthasoma hamorrhoidale is another common but well camouflaged species with green and brown markings. They are 13-15 mm long and feed on the fruit of hawthorn {haws} and the foliage. They may also be encountered on species such as Oak and Whitebeam. The nymphs of the hawthorn shield bug are often seen in late summer when their red colour contrasts with the green foliage of the hawthorn.

Below The hawthorn shield bug near their food the berries of hawthorn. Photograph courtesy of  Donald Holbern. CC BY-SA 2.0

As its common name suggests it is found wherever birch trees occur, this includes mixed woodland birch woodland and gardens. They may be encountered on isolated trees in Parks and gardens or even town centres. The adult season is May-July and from August-October. These creatures are from 8-10 mm long. They are similar to the previous species, however, the green and brown colouring is much prettier marked.

They are rarely found on young trees that lack catkins. The over wintering females lay their eggs in May or June in batches of around 20. These bugs may also be encountered on species such as Hazel and Aspen. They are common in the U.K.

Below the Birch shield bug is marked with some glorious colour. Photograph courtesy of S Rae { CC BY-SA 2.0 license} 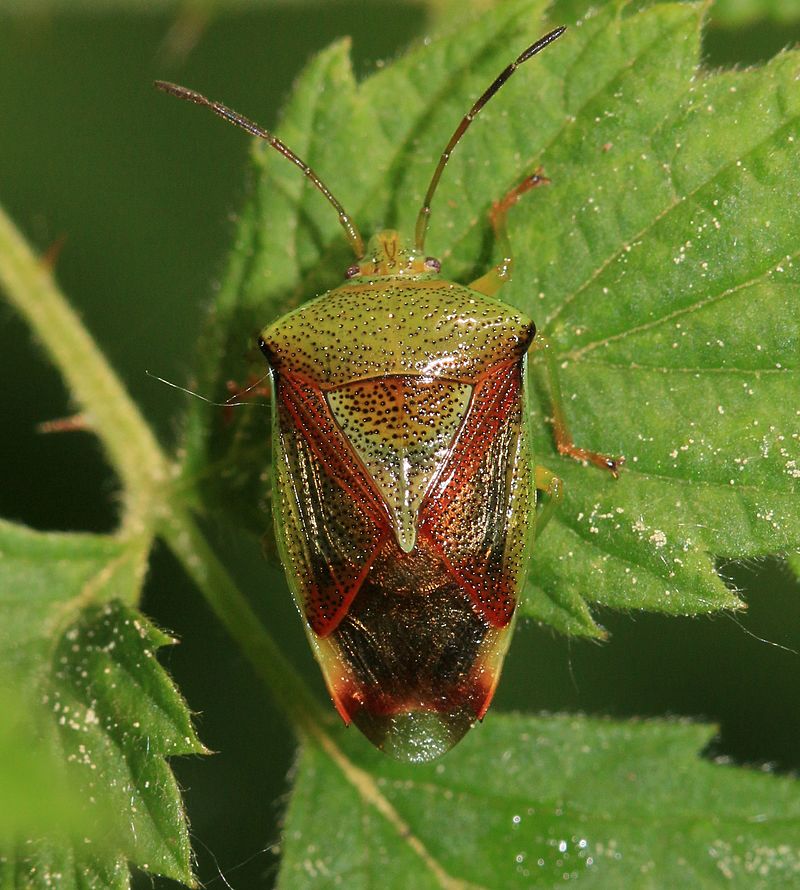 Above we have looked at three of the commonest species likely to be encountered in the north of England. Other species of shield bug occur in the U.K. some are common some are not so. however all shield bugs may be told by their similar shape as the photographs above testify.

Below are another three examples.

The Forest shield bug Pentatoma rufipes is associated with deciduous trees where it feeds on sap and small insects.

The Gorse shield bug Piezodorus lituratus id found on gorse but also on several other plants such as the related broom. Adults hibernate and emerge the following spring as green coloured bugs.

The sloe bug feeds on hawthorn sloe, raspberry and other related plants, especially on the fruit and flowers. It has a hairy appearance at close quarters, the Latin name for this species is Dolycoris baccarum.