This is another plant belonging to the Apiaceae { formerly Umbelliferae} family. which includes the Garden parsley, Fennel , Carroway, wild Carrot, Hogweed and and much more poisonous species such as Hemlock , Hemlock water dropwort and Fool's Parsley. So,  as often stated,  correct identification is essential if one is foraging for medicinal or culinary herbs for home use. It must be remembered in this respect that the Shepherd's needle is a UK BAP priority species due to declines in population /distribution since 1996. {see conservation issues below}

Description of the Shepherd's needle

The plant is typical of the Apiaceae, with erect, occasionally branching stems attaining the height of up to 60cm {2feet} and of a bright green colour. The foliage has a triangular outline divided into many divided segments.

The flowers are borne in umbels that have 1-4 rays. Each ray has a ring of characteristic deeply bifid, basal bracteoles and between 4-12 flowers. each individual small flower is Zygomorphic, with white petals. Each flower produces fruit consisting of two seeds which remained joined until ripe. each seed is a long needle-like appendage up to 6cm in length, which acts as a dispersal mechanism as the seeds ripen. It is from these seed pods that the plant takes its common name, they stand erect and are a salient feature. It is an annual herb found in the margins of arable fields sown with winter cereals.It is most frequently on heavy calcareous clay loam soils.

Line drawing of the components of Shepherd's needle

John Gerard in his book-The general Historie of plantes {1597} states--" Doth not much differ in the quantites of stalks and leaves and flowers, from  chervil, but Scandix hath no such pleasant smell of the chervil { Gerard was probably referring to Sweet cicely , Myrrhis odorata}.

The leaves be lesser, more finely cut and of a bright green colour. The flowers grow at the top of the stalks in small white tufts, after which come up long seeds very like pack-needles,orderly set one by another like the great teeth of a combe, where it tooke the name pecten venus { venus's combe}, or venus's needle. The root is white and finger like.

Shepherd's needle,saith  Galen is an herbe, somewhat binding and bitter in taste in so much that it is hot and dry, either in the latter end of the second degree, or in the beginning of the third. Dioscorides saith eaten both raw and boiled and that it is a wholesome pot herb among Greeks, but in these days it is of small value, and taken but for a wild wort."

The decoction was said to be good for the bladder, kidneys and liver, however, these practices ceased long ago.

Studies have shown that the bulk of the seeds germinate in the autumn and early winter, although some are known to germinate in the spring of the following year, following spring cultivation. The majority of germination occurs in the yaer after the seed production and the seed is thought to be short lived.

Many of the arable annuals that have suffered declines in recent years are autumn and winter germinators, those with short lived seeds being the most vulnerable to changes in farming practices.

During the early part of the 20th century an introduction of two years of a late spring sown root crop was considered an effective means of controlling shepherd's needle in arable fields.

Once germination has occurred, the seedlings form an overwintering rosette. the flowers begin during mid May and the flowering period is largely over by the end of June and most seeds have ripened by the end of July, before crops are harvested. Shepherd's needle is typically found in fields sown with winter cereals. The majority of sites where it now occurs are on heavy calcareous clays, particularly on the boulder clays of East Anglia. 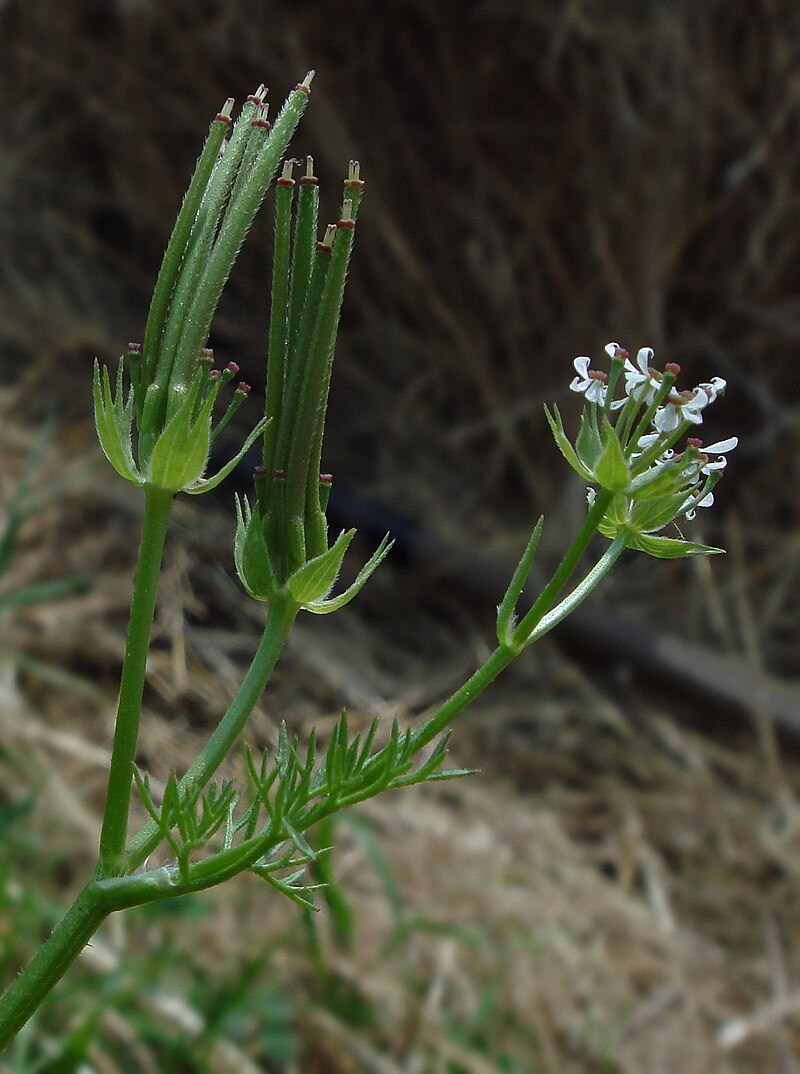 Because of declines in population/distribution numbers of over 50% since 1996, the plant is subject to a Species Action Plan in an attempt to halt the declines and ultimately to reverse them.

General overview.---The plant was formerly distributed throughout England, but with the majority of recordings coming from the south and east.There are fewer records from Scotland and Wales. Until the mid-20th century,it was regarded as a serious agricultural problem and was still included in pesticides use recommendations in the 1950s.

Before 1970, it had been recorded as a native or archaeophyte from 640-10km squares in the British Isles. However, between 1987-1999 it was recorded from just 166-10km squares. There are some descrepancies between the data and records held by the Threatened Plants Data base{ TPDB},

TPDB, there are only 97-10km square records for the species between 1987-2000. It is likely that the true figure lies between the two, both however, describing the overall situation.

The number of sites where the plant is regularly present  is unknown. While there has been a serious decline of the species throughout its  range, many populations have appeared in eastern England since the mid 1980s. As with many species caution must be observed in the interpretation of these figures as the species has a history of erratic appearances at many localities.

The current area occupied by this species is only 26% of its historical area, with most of the remaining sites poorly known. The TPDB, data maintains the plants Nationally Scarce status, however, clarification is needed of the status. To reiterate the facts on the decline of Shepherd's needle the last recorded plant in Lancashire was 1907 a decline of 100% 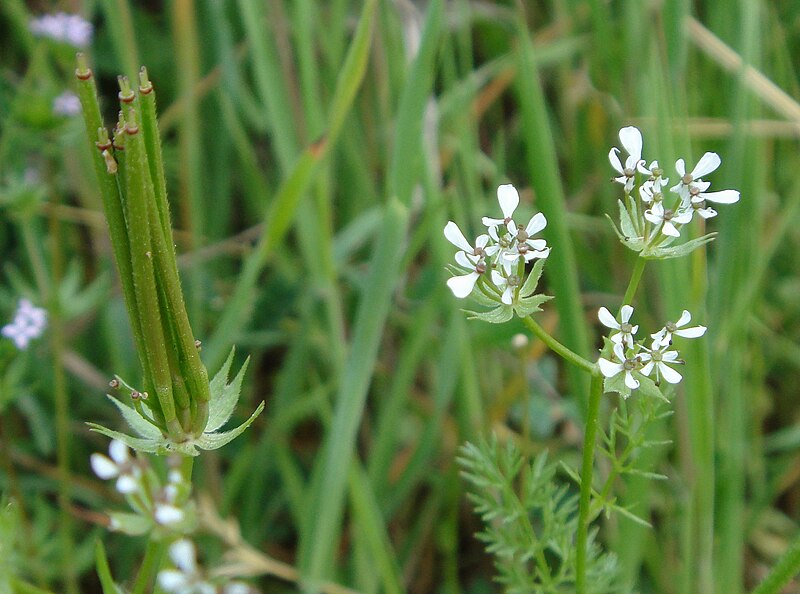 Threats to Shepherd's needle and aims of the SAP

The major reason for the loss of populations has been associated with intensive farming practices on arable farmland. Many losses are thought to the affects of the improved method of separating crop and weed seeds after harvesting. However, the broad spectrum herbicides did not do anything to lessen the plight of the species.

The introduction of increasing amounts of nitrogen and more competitive crop varieties seems to have had less affect on Shepherd's needle than any other rare arable plants.It has been suggested that stubble burning {now illegal} destroyed much of the seed production.

New threats come from the abandonment of arable land, as the profitability of arable farming in Britain decreases. The first parts of the fields to be withdrawn from production are usually the less productive field margins, which are also the last refuge of many rare arable plants,are often converted to grassland, sometimes as part of Agri- Environmental Schemes designed to benefit farmland wildlife.

The shepherd's needle persisted through the 1980s in an area of the central East Anglian Plain,when it had disappeared from much of the rest of the country. It is here that the plant is still most frequent.

Some sites are under favourable management, largely under the Agri-Environmental schemes which may help the species such as Environmental Stewardship.

Environmental Sensitive Areas, are run by DEFRA, the agreements are typically ten year contracts. It is not known how many sites under the scheme contain shepherd's needle.

Countryside Stewardship--this was the Governments principle scheme for sustainable management in the wider countryside.

The aim of the SAP includes the following-----  to maintain the range of Shepherd's needle in the UK.

To enhance the total population size in the UK.

The full SAP can be viewed on the J.N.C.C. Website at http://jncc.defra.gov.uk

The images on this page may be reused. However, the relevant name of the author must be attributed along with the appropriate License.

Associated pages. Click on the relevant banners at the top  of this page.

All other plant species that feature on this site can be viewed by clicking on the relevant content banners at the top of this page {they are all grouped together}.

Flora via Links. Click on the Links banner scroll down to relevant box. Click this is a direct link to the article{s}. Includes the series Past and Present Medicinal Uses.

Flora via your search bar. Click on the relevant content banner above. Scroll down to relevant article. Type into your search bar the shortened address given. This is a direct link to the article { s.}

Thank you for Visiting .