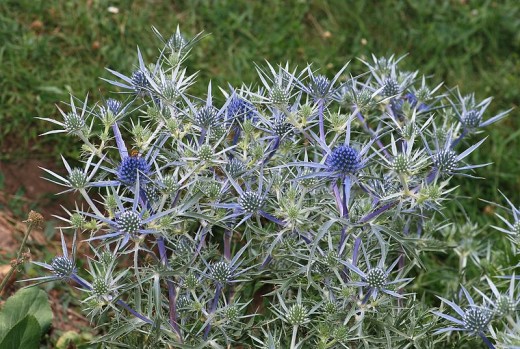 The Sea Holly, Eryngium maritimum, belongs to the Apiaceae family of plants, formerly the Umbelliferae, that group which produces the parsley, fennel, hemlock, and fool's parsley among many other garden favourites such as caraway and celery. Indeed the root is said to taste like the carrot. It is related to that other stalwart of the seaside the Rock Samphire.

His azure crest and warrior form,

And points his spears."

According to Edward Step " It is by no means a fragile flower, and preserves its form and appearance throughout the winter, that a good bouquet for that season may be made of this plant ,mingled with Carline Thistle, Sea Lavender, and Seaside grasses. However, it is very tough textured and difficult to gather"

The deep root system helps to bind the sand on the seashore. here we look at the species and its past and present medicinal uses. There are historical observations and noted from past herbalists and physicians. As always we will commence with a description of the subject under review. 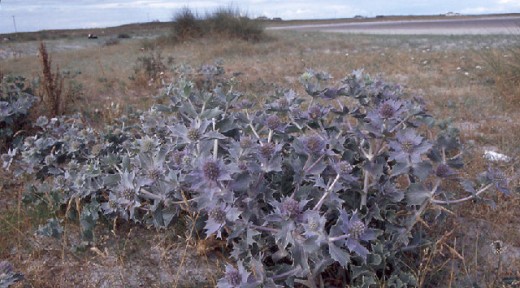 The root of this species is perennial and produces a long,creeping,cylindrical tap root , of a whitish colour internally. Externally it is covered with a brown epidermis {top skin} The stem is cylindrical , thick, striated,branched, leafy,smooth and glacous. It attains the height of about a foot {30 cm} or more.

The radical foliage are roundish-or almost heart shaped, stalked and plaited. The upper ones are stalk-less, lobed and palmated, amplexicaule. all are smooth, glacous, ribbed, veined and toothed with sharp spines. The leaves have a waxy texture and produce whitish veins.

The flowers are arranged in dense roundish terminal heads,1.5-2 cm wide {three quarters of an inch} Beneath the flowers are very spiny bracts, which are often tinged blue,reflecting the colour of the flowers.

In its native habitat this is a plant of the seashore throughout Europe, flowering in July and August. Old names include Sea Hulver, Sea Holm and its current name of Sea Holly all allude to the prickly spines. The bracts give the flowers a thistle like appearance. The foliage of this plant is more prickly than the true holly leaf.

The only other British species is the Field Eryngo- Eryngium campestre,which is far less common than our species,however, the medicinal properties are considered to very similar.

The root of this plant was once candied and eaten as a 'sweet meat',although it was more in request because of its supposed restorative and stimulant properties, for which it was much celebrated in the days of Shakespeare { Falstaff exclaims " let the sky hail kissing -comfits and snow Eringoes" -Merry Wives of Windsor}.

Eryngo roots were first candied at Colchester, about the beginning of the 17th century by Robert Burton an Apothercary. { Morant's Colchester page 92} . According to Linnaeus, the young shoots prepared like asparagus are " Grateful to the taste and very nutritious and restorative". The roots were said to have a sweet agreeable taste, and an aromatic odour which they yield completely to water. They appear to have very similar qualities to the Angelica root. The aqueous infusion,after it has stood a while,becomes slightly mucilaginous.

The root or rather the bark of the root was the part used in medicine. Dioscorides with other of the ancients, considered it a valuable promoter of the menses when obstructed, and also administered in tormina, liver complaints and other disorders. Boerhaave, esteemed it the principal of the Aperient roots and he usually prescribed it as a diuretic and antiscorbutic {treating scurvy},{ in his work Boerh..Hist. Plant page 144.}

However, by later physicians its Aperient {laxative} properties were esteemed as very gentle and calculating, indeed,only as an adjunct to the aperient decoctions intended for delicate or pregnant females. Ettmuller, Geoffroy and most of the ancient writers,speak of this medicine as a certain though gentle aphrodisiac. It was principally, however, in affections of the chest, that it was employed with reputed success, and even in consumption it was said to relieve the cough and promote easy expectoration.

For that purpose the root was considered to be the most pleasant form, as all the virtues of the root were preserved by sugar. Ettmuller also recommended a conserve of it for the same intentions," And this is worth keeping , as it admits of combination with other medicines".

Culpeper 17th century, recommended that the distilled water made from the whole young plant should be taken for melancholy of the heart,and for fevers .in the time of Queen Elizabeth the first when the roots were candied by sugar they were commonly referred to as 'kissing comfits {sweets to freshen the breath}. However, by the early 19th century it had lost favour with most herbalists and physicians.

The above information is for historical purposes and not meant as a guide to self medication.

Close up of the flowers. 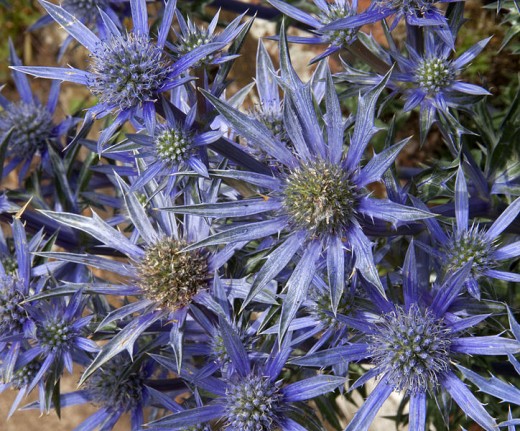 Science has proved that the plant contains some antioxidant properties and some anti-bacterial ones. Its main use today seems to be as a diuretic. The root is used as an expectorant and is used in the treatment of coughs and in chronic cases of pulmonary consumption.

It is also used in the treatment of cystitis . Drunk freely it is said to treat diseases of the liver and kidneys. Used externally as a poultice, the dried powdered root is claimed to aid tissue generation. There are known hazards associated with this plant. However, in a paper -Current Research and Journal of Biological Sciences {Maxwell Scientific Organisation 2012} shows that the study of the roots and their properties are on going. The results so far from this study reveals Eryngium maritimum roots contain a considerable amount of Phenolic compounds and had significant antioxidant, antibacterial and anti-fungal activity. Further study is thought to be essential to characterize them as a biological anti-fungal drug,antibiotic and antioxidant,which were beyond the scope of the study.

Some modern day herbals claim it purifies the blood and combats the inflammations that affect the urinary tract. This is said to be combated by a dose of 15 drops of tincture three times a day. However, most recommend it as an expectorant in colds and flu. A decoction of the root is claimed to remove toxins from the body.

If you are trying herbs for the first time always try a small amount first to test your body tolerance.

The images on this page may be reused. However, the name of the relevant author must be attributed along with any accompanyingh license.