Uploaded to Commons by Fae. Public domain. All the images of the letter E on this page are from the same source. 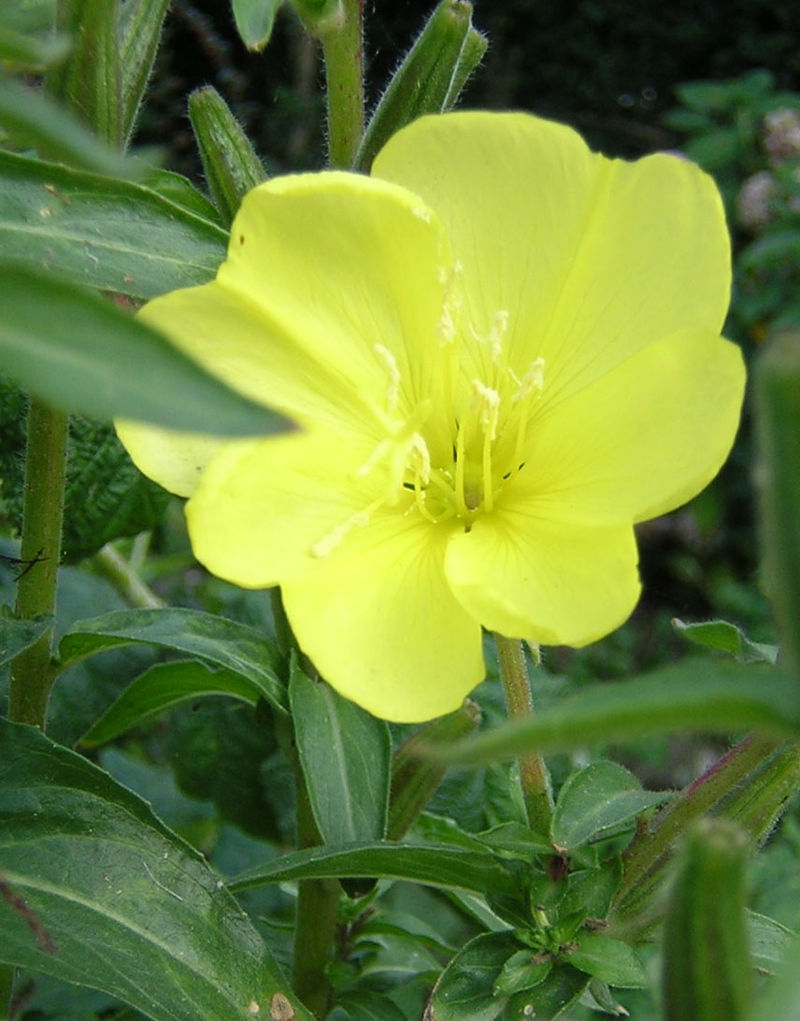 Common name; derives from the fact that its yellow primrose like fragrant flowers,that looks bedraggled during the day but are transformed  by the beauty of its open flowers in the early evening.However,the flowers are short lived but continuous in their production. In summer the flowers will remain open day and night.

The genus name of Oenothera, derives from two Greek words oinos meaning wine+ thera meaning hunt. According to Ancient herbals the plant was said to dispel the ill-effects of wine.

The specific name of  biennis indicates it is biennial.

The common name and Circaea. In the 16th century, a Flemish botanist named Mathias De L'Obel,tried to identify a magical plant which the early Greek physician Dioscorides had named after the mythical sorceress Circe. His first choice was bittersweet,which supposedly acted as a good charm,but his choice later fell on Enchanter's nightshade,which still bears the name Circaea.

lutetiana, Lutea, is the Roman name for Paris where De 'L'Obel and other botanists live.{ before the Romans the Anglo-Saxon's had used the plant which they called aelfthone,as a protection against spells by elves.}

The common name of Eyebright derives from the plants use and reputed qualities in the treatment of eye ailments.

Euphrasia, the genus name is derivedto gladden,and probably refers to the plants reputed medicinal power,in 'Gladdening the eye' from the Greek euphraino, meaning  to gladden.

nemorosa means of the woods.

Inula,-could derive from hinnulus,meaning a young mule. Down the ages the plant has been used in the treatment of horses and other equine beasts, this gave rise to country names,such as Horseheal,and Horselean. 2', others say it is a corruption of hellenium. See below.

helenium--named after Helen of Troy who was belived to have been gathering it,when she was abducted by Paris.

Another country title was Scabwort,which alludes to its long used medicinal decoction of the root employed externally on scabies and acne etc.

Elder, the common name derives from the Anglo-Saxon  aeld. In Anglo-Saxon times  the tree was known as Eldrun,which becomes Hylder and Hyllantree in the 14th century,and later eldearn. Aeld the Saxon word meant fire. The pithe was hollowed out of the branches ,then they were blown through to blow up the fire ,much in the same way bellows were used later.

These hollowed out branches were also used to make pipes,hence 'Pipe tree',a country title for the Elder.

Sambucus the genus name derives from the Greek sambusca, the name of an old Roman instrument made from wood of an elder tree

nigra the specific name means black and alludes to the berries.

globulus the specicif name means like a globe,and alludes to the closed buds.

The specific name of mollisima =very soft from mollis meaning soft. All allude to the birds thick down feathers.

Common name derives from the fact that they associate with large mammals, such as cows. They hunt for insects that are disturbed by their trampling.

Is a critically endangered species globally.

The specific name of Numenius comes from the Greek neos meaning new+mene meaning moon alludes to the birds curved beak.

The specific name of borealis derives from the Latin boreas the north.

The specific name of ibis is from the Greek name for the Ibis.

The specific name aegyptiaca derives from the Greek aiguptos meaning an Egyptian.

The specific name  vespertina derives from Latin vespertinus,indicating of the evening ,from vesper -evening.

The genus name Turdus is the Latin name for the Thrush.

Other words beginning with E-that you may come across in the Latin names in plant and bird books.